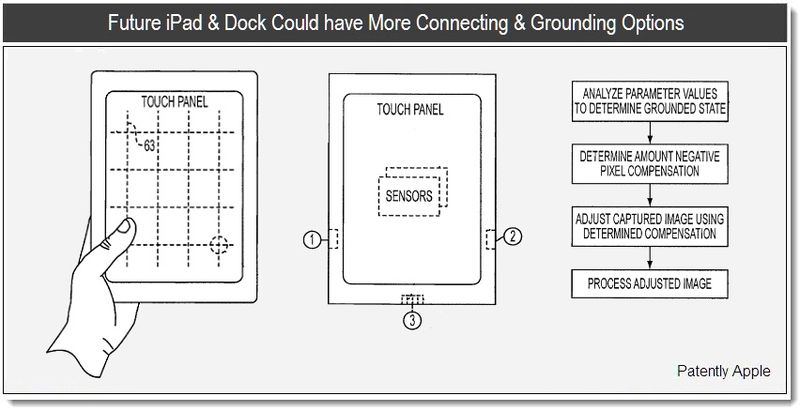 A new Apple patent focuses on grounding future iPads in superior ways so that touch values don't get distorted when the iPad isn't being held by the user. For example, a user could be resting their iPad down on a wooden coffee table or a leather sofa so as to read a book or surf the web. In these situations, the iPad isn't being properly grounded and could begin to cause the iPad's touch commands to behave incorrectly due to improper grounding. Apple's solution includes adding additional ports to make it easier to ground the iPad and a new notification system to warn the user that the iPad requires to be grounded for proper operation.

Apple's invention relates to ground detection for a touch sensitive device like an iPad. A future iPad could detect its grounded state so that poor grounding could be compensated for in touch signals outputted by the iPad. The iPad may include one or more components that monitor certain conditions. The iPad will be able to analyze the monitored conditions to determine whether it's grounded.

A future iPad may selectively apply a function to compensate its touch signal outputs if the iPad determines that it is poorly grounded. Conversely, the iPad could selectively ignore the function if it determines that it's well grounded. Ground detection could advantageously provide improved touch sensing and power savings by not having to repeat measurements subject to poor device grounding. Additionally, the iPad could more robustly adapt to various grounding conditions.

The iPad to Gain Connector Sensors 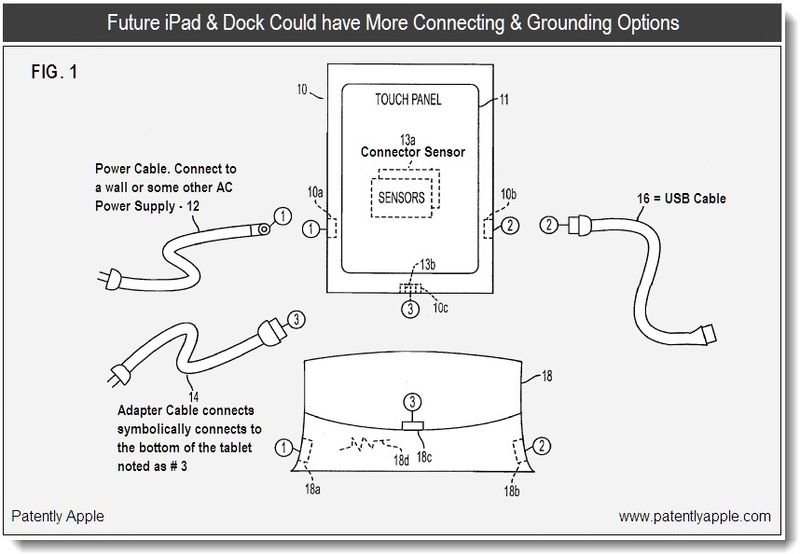 Apple's patent FIG. 1 illustrates an iPad having a connector sensor that could be used for detecting a grounded state of the device according to various embodiments. As you could see, a future iPad may have two USB connectors as shown as #2 on the right side and # 3 at the bottom. This would support other Apple filings. The iPad may also gain a Power Cable port on the left side noted as #1. A future iPad dock would correspondingly support the new ports.

In Patent FIG. 1, The Connector Sensor 13a could sense power from the power cable 12 via the connector port 10a. The sensed power could indicate that the iPad is plugged into a wall outlet, for example, thereby grounding the device through the wall ground. Therefore, sensing power via the connector port 10a could indicate that the iPad is grounded such that negative pixel compensation could be either deactivated or reduced, if currently active, or can remain inactive otherwise, when the touch panel 11 produces touch signals. The same is true for connector port 10b, whereby the connector sensor senses that a USB cable has been plugged in and so forth.

Apple's patent FIGS. 1 through 5 illustrate exemplary device parameters and corresponding device components that determine the parameters' values which could be used for detecting a grounded state of a touch sensitive device according to various embodiments. 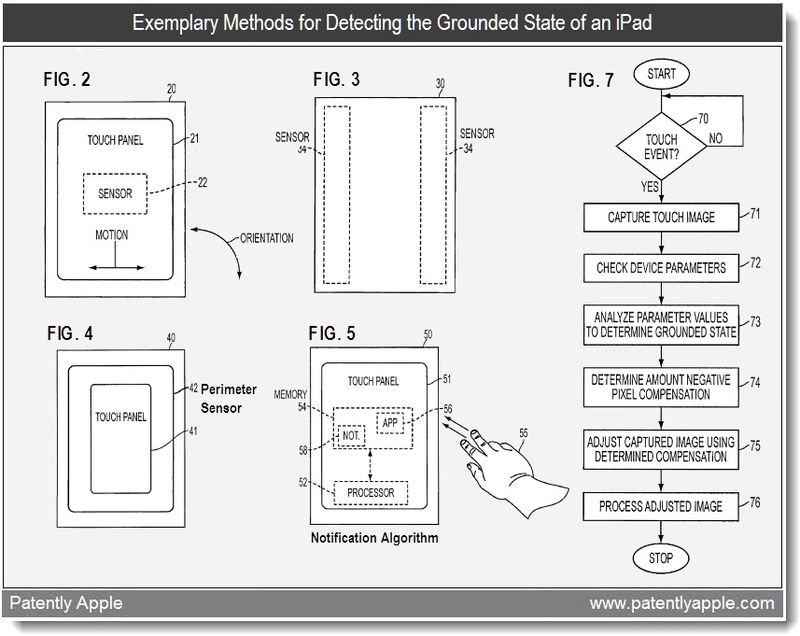 Apple's patent FIGS. 2,3 and 4 points to various sensors that the iPad will use that could be used for detecting its grounded state. They include motion, proximity and perimeter sensors. The perimeter sensor will be implemented in the iPad's frontside bezel, though the patent states that the sensors could be placed on the back as well. The users touch grounds the iPad.

Apple's patent FIG. 7 illustrates an exemplary method for detecting a grounded state of a touch sensitive device like an iPad.

In Apple's patent FIG. 5, we see an illustration of a future iPad having a notification algorithm that could be used to detect its grounded state. If the grounding is poor, the iPad will communicate such to the user via a new notification system.

Sensing the orientation and motion of the iPad could give an indication of the iPad's current status, which could be indicative of the device's grounded state. For example, if the iPad's motion sensor 22 (noted in FIG. 2 above), senses a particular pattern, frequency, and/or magnitude of vibrations unique to humans, the device could determine that it is in contact with a user, e.g., being held, and therefore grounded. These patterns, frequencies, and/or magnitudes could be predetermined or could be "learned" if the user places the iPad into a learning state while holding, moving, or walking around with it.

Sensing a surface proximate to the iPad could identify the type of surface, e.g., wood, metal, plastic, organic, inorganic, human, and so on. For example, sensing a proximate human surface could be an indication that the iPad is being held by a user or resting in the user's lap and therefore grounded. As such, negative pixel compensation can be deactivated or reduced, if currently active, or could otherwise remain inactive.

Apple credits Steve Hotelling, David Amm, Michael Lammers, John Orchard, Brian King, Omar Leung and Deniz Teoman as the inventors of this January 2011 patent application, originally filed in Q3 2009. For the sake of trivia, the original filing listed the ARM 968 processor as a candidate for the iPad.