A new Apple patent application has surfaced today that describes how users will be able to better control audio and visual outputs for their iOS devices. Apple states that the new visualizer is similar to the one currently available on iTunes, but not operationally. The new system works on fine-tuning itself to the user's environment, especially for those in high octane exercise or party environments. The system appears to take Apple's iTunes DJ app to the next level. The new system employs a new physiological sensor which monitors your heart and breathing rates while you're dancing so as to adjust the music and light show accordingly. The new system appears to have been designed with Apple's new social networking app Ping in mind.

In another example, the system could modify an audio-related operation by selecting a piece of music based on at least the characteristic property and then playing back the selected music. Accordingly, a system could control an audio and visual experience based on its environment.

Apple's patent really begins when they begin pointing out the various components involved in this new system; Components that will likely be coming to various future versions of Apple's iOS devices.

In some embodiments, the magnitude or frequency of such vibrations may be representative of the movement of people in the environment. For example, each person may be dancing and their footfalls may create vibrations detectable by motion the sensing component. 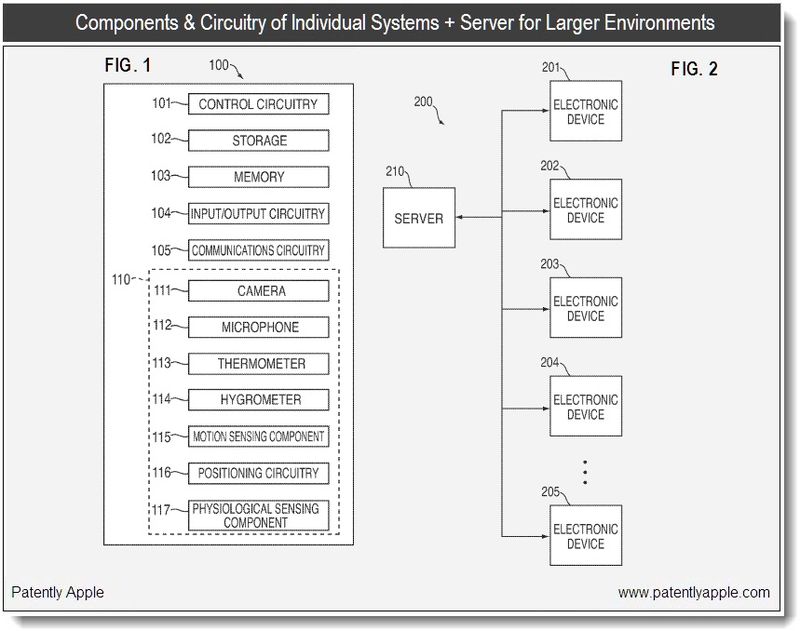 Apple's invention will also utilize, believe it or not, a physiological sensing component (117) which could be operative to detect one or more physiological metrics of a user, such as heart rate, pulse waveform, breathing rate, blood-oxygen content, galvanic skin response, temperature, heat flux, any other suitable physiological metric, or any combination thereof.

Some Sensors Connect to a User's Body

In some embodiments, the physiological sensing component may include one or more electrical contacts for electrically coupling with a user's body. Such sensors could be exposed to the external environment or disposed under an electrically, optically, and/or thermally conductive material so that the contact could obtain physiological signals through the material. This could be theoretically used with a future version of the Nike + iPod system, other gym based equipment or perhaps to a skier and so forth.

A system for controlling an audio and visual experience may include a server. In some embodiments, a server may facilitate communications amongst devices. For example, system 200 may include server 210 for hosting a website (e.g., a social networking website) and the server may transmit signals to the devices representing information about an environment that is collected from the website. In such an example, electronic device 201 may then control an audio and visual experience based on the information about the environment (e.g., which website members are in the environment or the mood of the website members that are in the environment).

Beyond the Traditional iTunes Visualizer 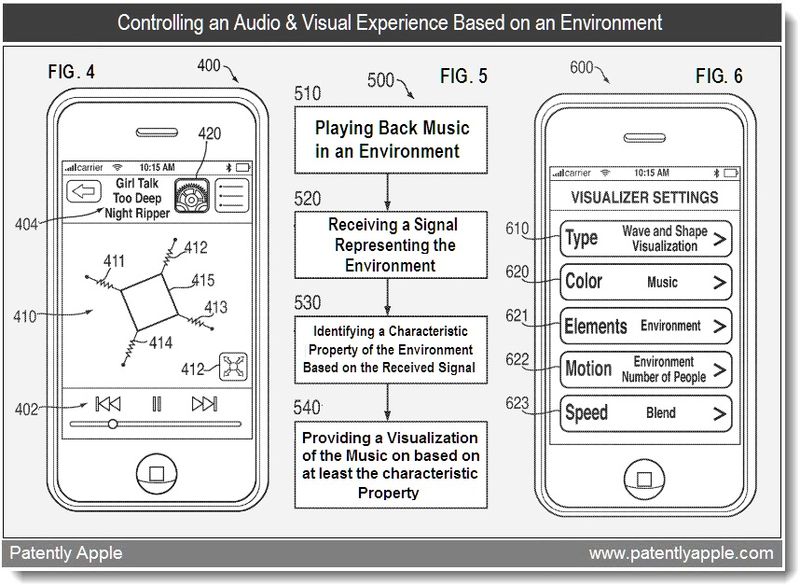 Apple's patent FIG. 6 is a schematic view of an illustrative display for configuring a system to provide a visualization of music. 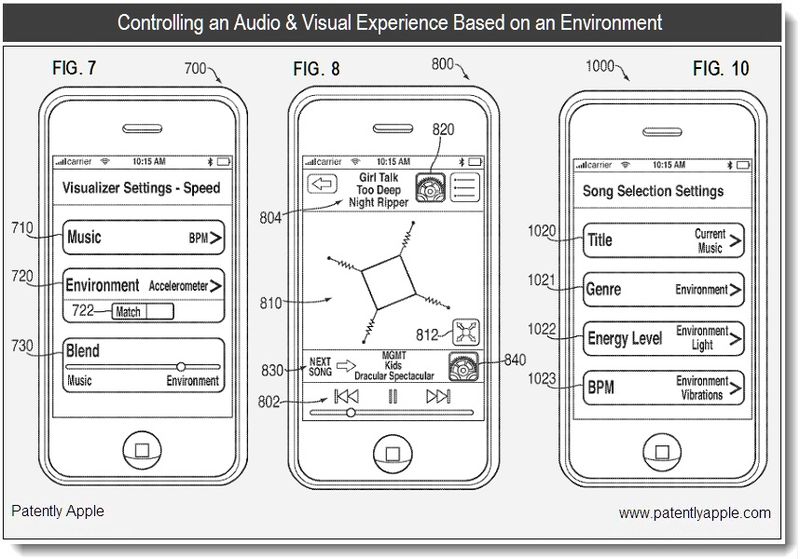 It should be noted that we just reported on Apple filing an application with the USPTO yesterday that will adjust their branding to cover social networking.