The US Patent and Trademark Office officially published a series of 13 newly granted patents for Apple Inc. today. Some of the notables within this group include the iPhone's Wireless Communications Circuitry, the technology behind the MacBook and Magic Trackpads including haptics and haptels – and lastly a major win for gesturing. The gesturing patent interestingly relates to the iPad and/or larger surfaces including future "hover" surfaces where real-world gestures could be introduced.

Apple has been granted a major patent relating to detecting and interpreting Real World and Security Gestures on touch and hover-sensitive devices. Some of the gestures presented in Apple's patent have yet to surface on their iPad. Gestures such as shape gestures, identity gestures or an odd one dubbed the "hitchhiker" relating to directional gestures. There's also an "Okay" gesture and more. Whether Apple will introduce any of these new gestures into a future iPad is yet unknown.

In our first graphic below, we present Apple' patent FIGS. 7E and 7G which relate to performing targeting and/or selecting tasks; FIGS 13A AND 13B relate to Zooming Gestures; In Apple's patent FIGS. 24A-24H we see something different that has yet to surface. We see illustrations of an exemplary "hitchhiker gesture formed by either hand over a touch or hover sensitive device can be detected and interpreted to perform operations requiring a directional input, such as a scrolling, panning, windowing, translating in time (e.g., moving backward or forward in time in an audio or video recording), and the like. 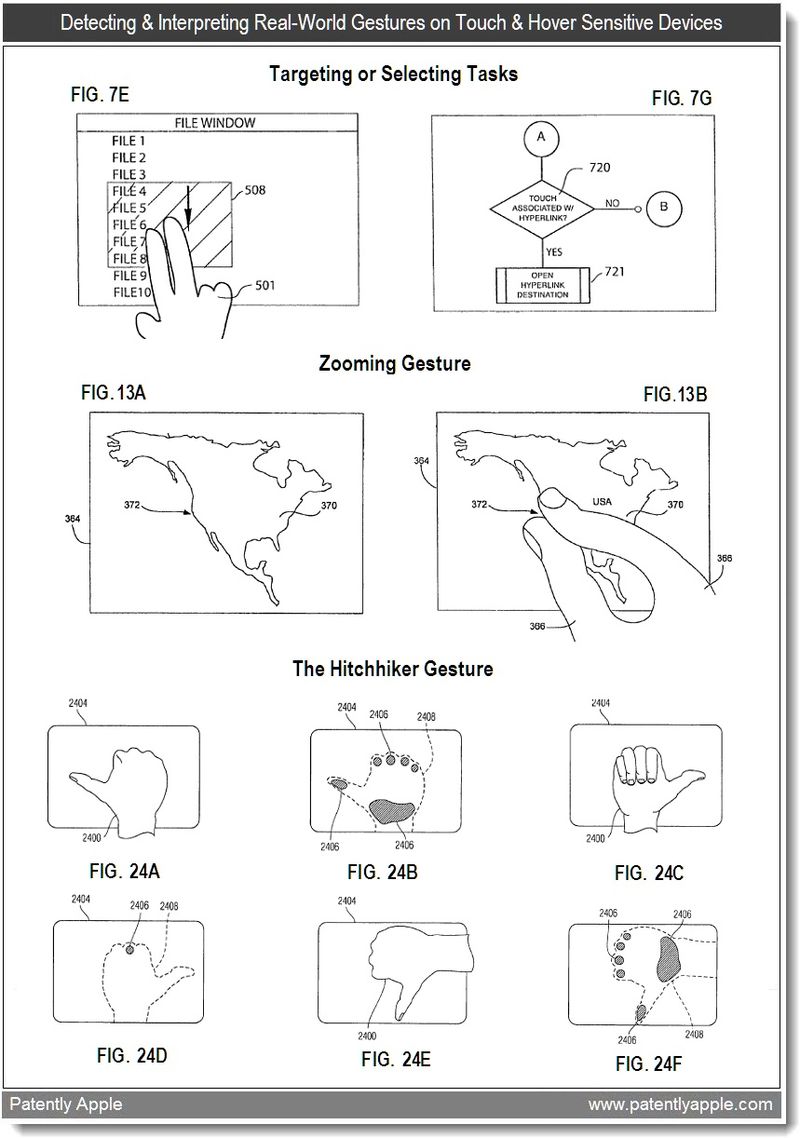 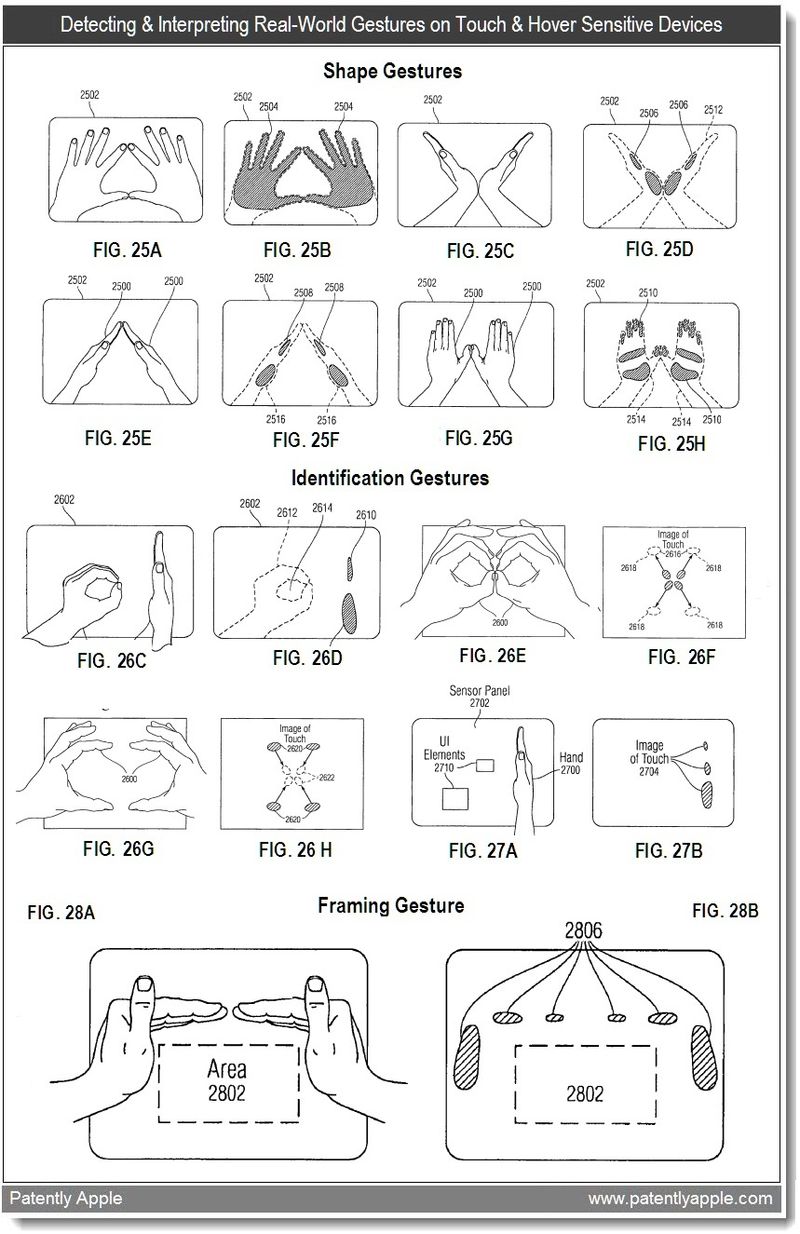 Another hover related  granted patent from Apple's Wayne Westerman (and Steve Hotelling) has surfaced this morning titled "Far-Field Input Indentification." The patent describes techniques for identifying an object in close proximity to, but not in contact with, a multi-touch screen device like an iPhone. By way of example, a cheek or ear hovering a short distance from the touch surface (e.g. 1 to 3 centimeters) may be identified and distinguished from physical contacts to the surface. 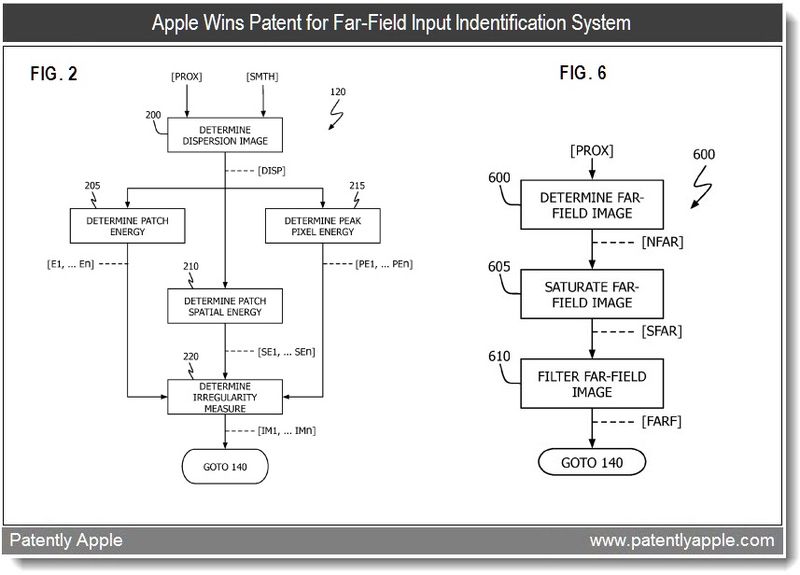 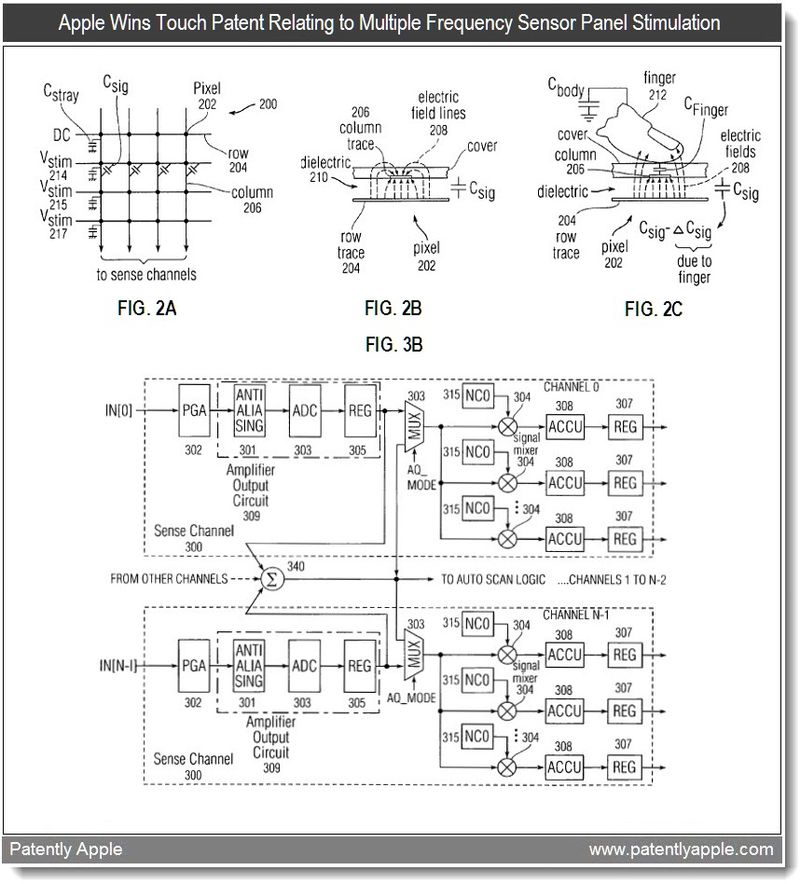 Apple has been granted a very complex patent which relates to the technology that's behind their MacBook Pro Multi-Touch trackpad and their standalone Magic Trackpad.

The patent states that "One of the benefits of having more than two points of control is the ability of a user to employ multiple fingers for pointing purposes, even in combination."

The Magic: Haptics and Haptels

Apple's patent states that "the touchable area is comprised of a grid of haptic elements, referred to herein as haptels. Haptel is used herein to describe a haptic feedback device with linear motion having a touchable surface substantially perpendicular to the direction of motion. A haptic feedback device is used herein to describe an input and output device with a moving portion manipulated by a user, one or more sensors that measure the position and/or various derivatives of position and/or the forces applied to the moving portion, one or more effectors which can apply forces to the moving portion, and a processor which measures the sensors, computes a response, and drives the effectors to create a range of haptic effects.

In one embodiment, each haptel includes a position sensor to measure the vertical position of the surface within its range of travel, an electromagnetic linear actuator to provide a controllable vertical bi-directional feedback force, and a touch location sensor to measure the coordinates of a single touch within its bounds. Preferably, the haptel grid is covered by a single sheet of flexible material that protects the haptels and hides the grid from view." 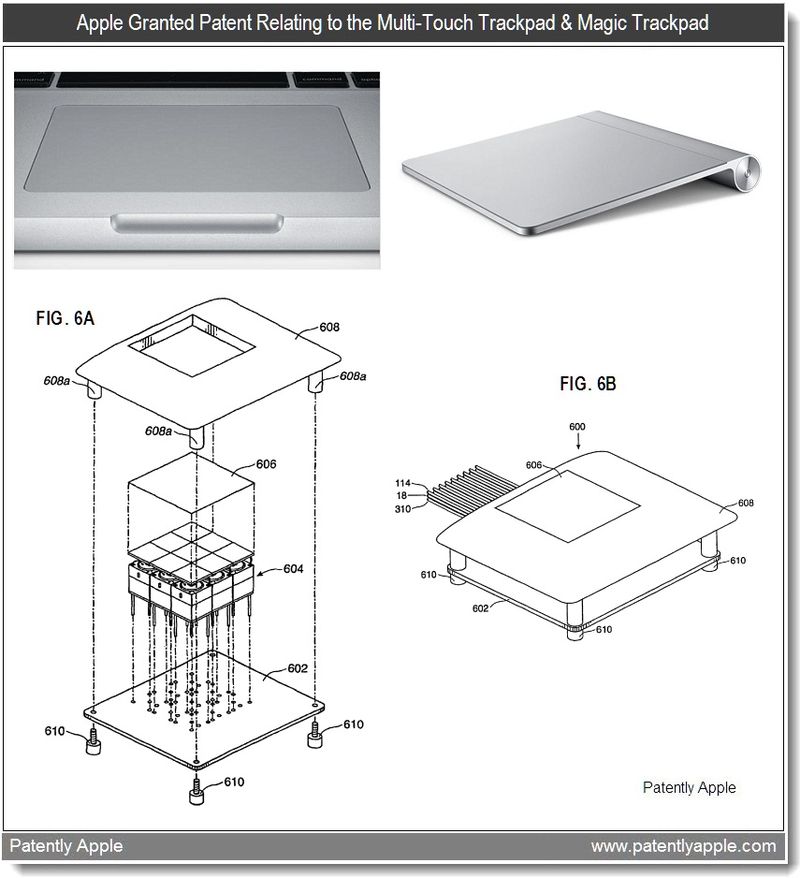 Apple credits Daniel Fish as the sole inventor of Granted Patent RE42,064 titled "Force feedback computer input and output device with coordinated haptic elements" originally filed in Q4 2006. This is a very interesting patent. You get the sense that there may be other haptic implementations in the works for the future. Lastly, it should noted that Apple's Magic Trackpad has won several design wins in China. The news designs were posted yesterday yet published late last week.

Apple has been granted an iPhone patent relating to its wireless communications circuitry.

Apple's patent abstract states that "a handheld electronic device may be provided that contains a conductive housing and other conductive elements. The conductive elements may form an antenna ground plane. One or more antennas for the handheld electronic device may be formed from the ground plane and one or more associated antenna resonating elements. Transceiver circuitry may be connected to the resonating elements by transmission lines such as coaxial cables. Ferrules may be crimped to the coaxial cables. A bracket with extending members may be crimped over the ferrules to ground the coaxial cables to the housing and other conductive elements in the ground plane. The ground plane may contain an antenna slot. A dock connector and flex circuit may overlap the slot in a way that does not affect the resonant frequency of the slot. Electrical components may be isolated from the antenna using isolation elements such as inductors and resistors." 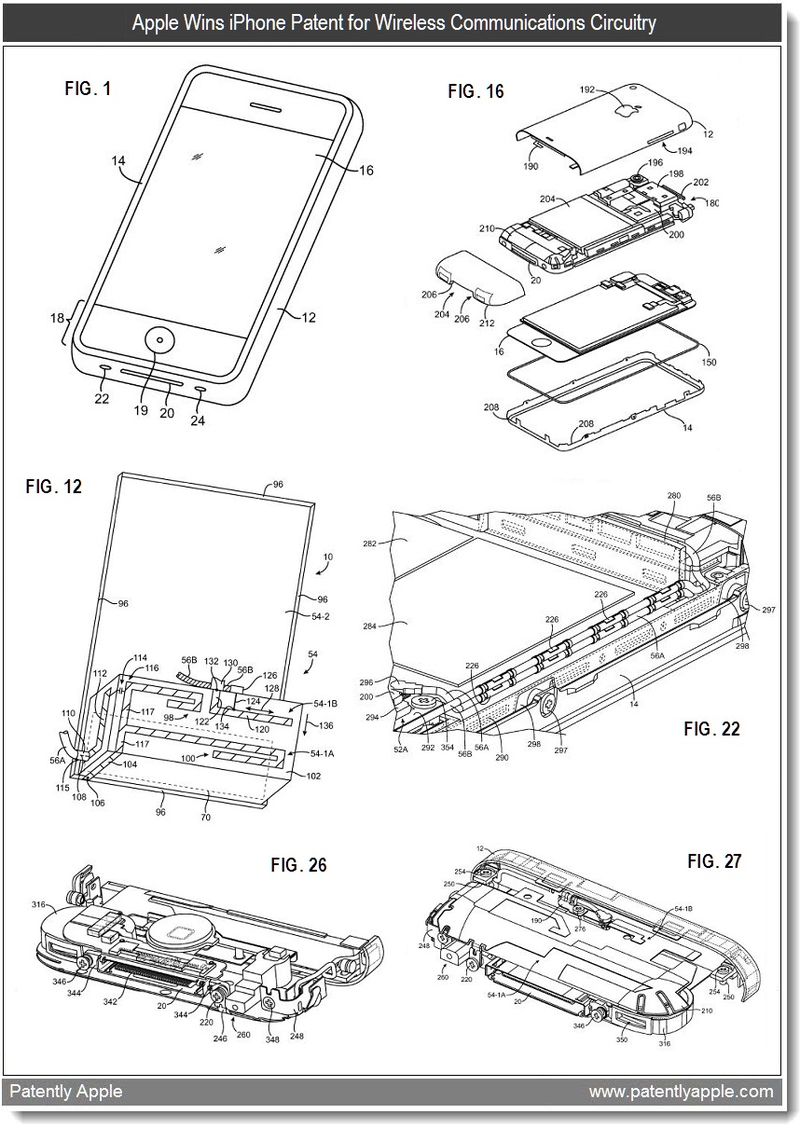 Two additonal granted patents relating to touch technology were integrated into this report around noon today.