The US Patent and Trademark Office officially published a series of ten newly granted patents for Apple Inc. today. The notable that stands out amongst all is Apple's first solar powered portable device patent. The patent pertains to all portables from MacBooks to the iPhone. The patent presents methods of adding solar power into the power mix of portables via a voltage converter. This is Apple's fourth solar powered patent and is now seen as a bona fide emerging trend for future portables.

Handheld computing devices typically use standard battery chemistries including ni-cad, lithium-ion, and nickel-metal hydride. In order to recharge these batteries, operators may use standard recharging options such as, for example, conventional AC (alternating current) outlets. However, mobile users who are in remote locations oftentimes do not have access to conventional AC outlets. As a result, they oftentimes have no way of recharging the batteries of their handheld computing devices.

In addition, a conventional portable device or handheld device typically includes a battery and an AC adaptor for charging the battery. Certain handheld devices, such as a calculator, include a solar panel to generate solar power to activate the device. However, such a device does not normally include other power sources to charge the battery. Sometimes the solar power source or AC outlet may not be conveniently available. In such circumstances, a device limited to one charging method may not function properly.

Schematics for Operating a Device with Solar Power 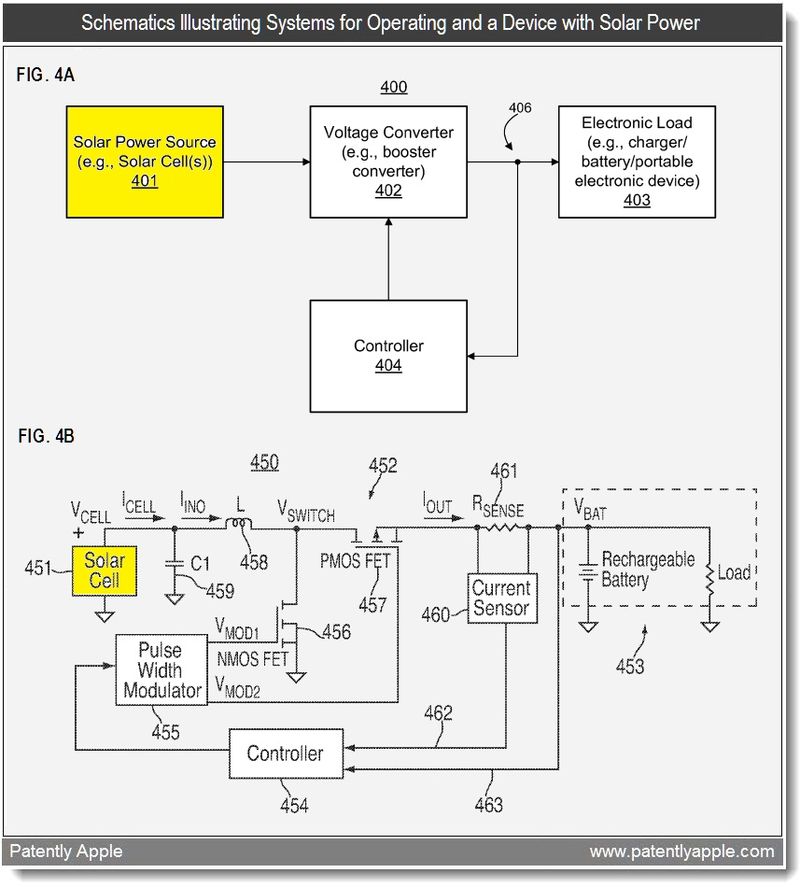 Apple's patent FIGS. 4A and 4B are schematic diagrams illustrating systems for operating an electronic device with solar power 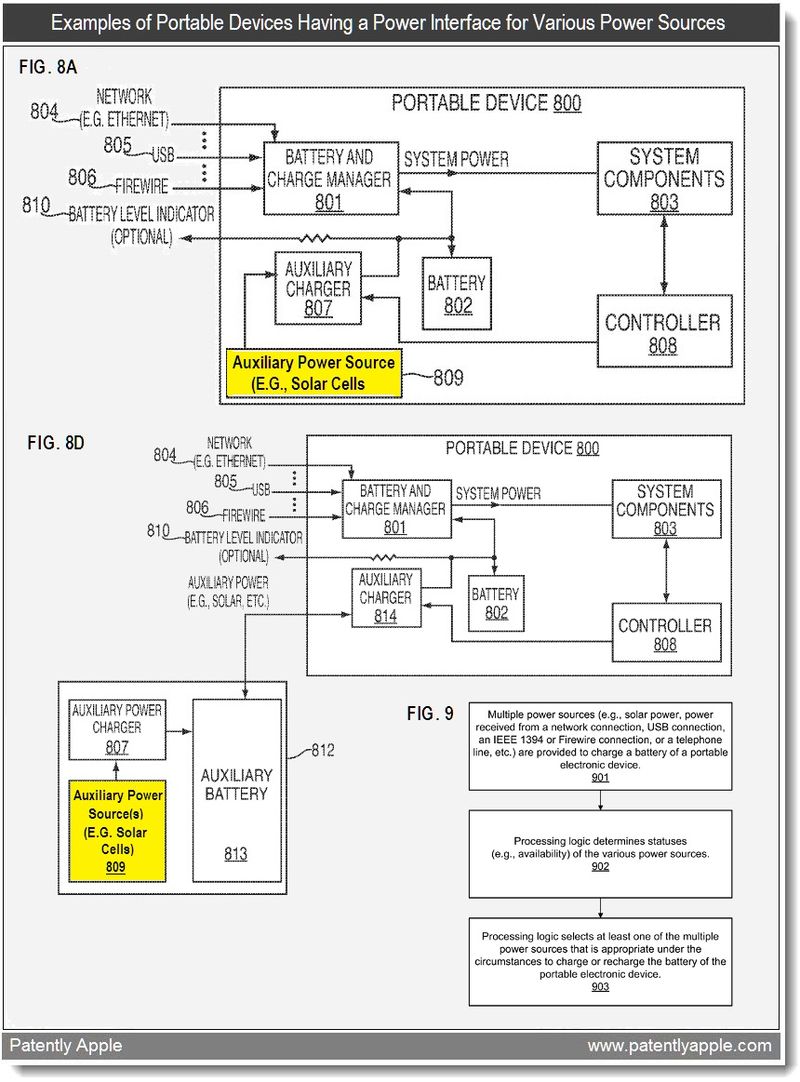 Apple's patent FIGS. 8A and 8D are block diagrams illustrating examples of portable electronic devices having a power interface for various power sources; In patent FIG. 9, we see a flow diagram illustrating an example of a process for interfacing a portable device with a variety of power sources.

Apple credits Wendell Sander and Daniel Warren for granted patent 7,868,582 originally filed in Q1 2009. It should be noted that this particular patent was likely filed under another name originally, such as an engineers name, as it didn't go through the application phase as an Apple patent. This is a method used to fly under radar so as to keep a technology or process as secretive as possible.

H.264 AVC Video Related: Apple has been granted patent 7,869,503 for "Rate and Quality Controller for H.264/AVC Video Coder and Scene Analyzer Thereof." This has been long in waiting, as the patent was originally filed in Q2 2004. The patent relates to encoding video signals, and more particularly, encoding of video allowing control of bitrate to meet a target while ensureing that good video quality will result when the encoded stream is decoded. If video technology is your field of expertise, you may find this of interest as it is a very detailed patent.

Notice: Patently Apple presents only a brief summary of patents with associated graphic(s) for journalistic news purposes as each such patent application and/or Granted Patent is revealed by the U.S. Patent & Trade Office. Readers are cautioned that the full text of any patent application and/or Issued Patent should be read in its entirety for further details. About Comments:Patently Apple reserves the right to post, dismiss or edit comments.

Review Apple's other Green Patents in our Tech: Green Archives and/or learn about Apple's Environmental Footprint

January 13: CNN's Stacey Cowley's report (see Video Link, above) framed it well. It will take a while for Apple to implement solar technology into portables because they'll do it right. Some inventions, like Apple's solar power implementations, will take time to come to market and it shouldn't be expected to be on Apple's 2011 roadmap. Patents shouldn't be digested as "rumors" and shouldn't be fast-tracked on rumor time tables. Apple's patents represent research that could lead to future products and should be understood in that light.

Happy to see the innovation, especially as an Arizonan who has plenty of sun. But I feel sorry for the Alaskan that will only be able to use this a few hours of the day.

SMart move, but see nothing special, this can be done by any 3rd year electro student!

As a solar panel company, we're glad to see that we might be able to buy a solar powered Apple iPod in the future.