On January, 13, 2011, the US Patent & Trademark Office published several interesting patent applications from Apple. In this report we cover three that primarily relate to Apple's portables. Firstly, Apple is seeking ways to simply the iPod's old click wheel so that it could be much thinner with less moving parts. Secondly, Apple wants to change touch screen controls to be invisible when not in use and lastly, Apple wants to ham it up in FaceTime with a likely new fun app that could alter your voice so that it could sound like a scary alien, monster or ranting Tea Partier.

Every once in a while, Apple spices things up and offers up a new fun application, like Photo Booth. Well, Apple is at it again. I'm not sure if Apple will time this to OS X Lion's debut this summer, but whenever it arrives it should be fun. Photo Booth is about having fun with photos using Apple's in-device iSight camera and Apple's latest invention suggests that they'll have a fun audio app that could help you create alien, funny or scary voices for FaceTime or better yet, voice tracks for iMovie. A Pro component could also emerge for Final Cut Pro and also be a great tool for gaming developers.

Audio synthesis techniques have been used in entertainment industries and computing industries for many applications. For example, special effects may be added to audio recordings to enhance the sound tracks in motion pictures, television programs, video games, etc. Artists often desire to create exotic and interesting sounds and voices to use with non-human characters in motion pictures, such as aliens, monsters, robots, animals, etc. 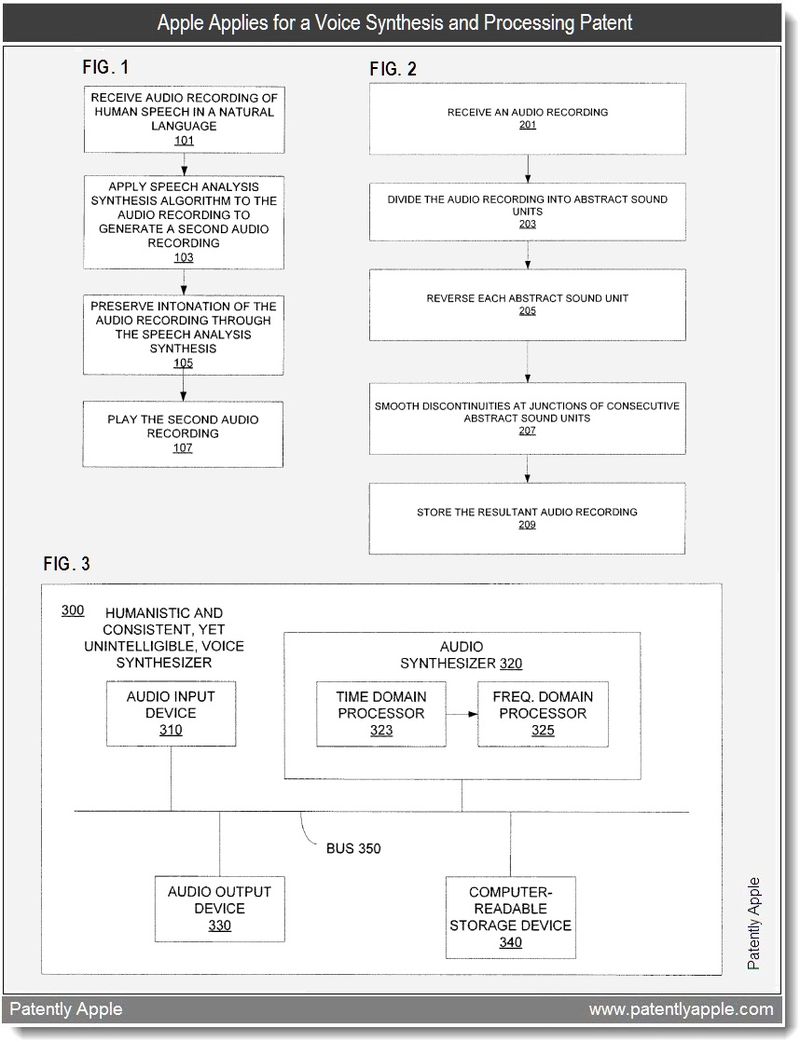 Creating Alien and Monster Dialects or Goofing it up in FaceTime

Alternatively, the above approach may be used in combination with other voice or speech encrypting techniques to encrypt the voice recording received in order to strengthen the encryption. In some embodiments, the above voice synthesis technique may be used with an instant messaging application, such as iChat (or FaceTime). In one example, the above technique may be used with text chat that is synthesized with alien voice effect. Specifically, text-to-speech synthesis may be applied to the text entered via text chat, following which the above technique may be applied to the speech synthesized to generate an unintelligible, yet consistent spoken content related to the text entered.

In another example, the above technique may be used with audio chat, where part of a single speaker's speech is analyzed and rendered into an unevolved spoken dialog to produce the effect of a conversation between two speakers. For instance, the speech may be analyzed and divided into abstract sound units using automatic speech recognition. Subsequently, the above approach is applied to generate an unintelligible, yet consistent rendition of the speaker's voice, which retains the vocal characteristics and intonation of the speaker, but renders it unintelligible.

Patent # 2: Method for Adjusting a Playback Control with a Finger Gesture

Apple's patent states that existing methods for adjusting playback controls are cumbersome and inefficient. For example, navigating and manipulating a large number of playback controls, menus, or options is tedious and creates a significant cognitive burden on a user, particularly for handheld electronic devices. In addition, existing methods take longer than necessary, thereby wasting energy. This latter consideration is particularly important in battery-operated devices.

Humorously, Apple states that "For purposes of clarity, very few graphics are displayed on the touch screen." However, by doing so, it's harder to understand what the illustrated gesture is supposedly accomplishing on screen.

One example is adjusting volume, though interestingly the patent points to adjusting "bass," "treble," and "balance," which on my current iPod touch isn't an option. So these controls may be on the way.

What Apple is proposing is in line with their move to "full screen apps." It's about getting the fixed visual media controls of the UI to get out of your face as soon as you're done with your adjustments.

While Apple's patent application states that it applies to touch pads as well as a click wheel or even a new touch wheel, the illustrations make it clear that emphasis is on the latter applications. This might mean that Apple is considering a new thinner iPod Classic or will be implementing new touch wheel applications for Apple's other touch products such as the iPod touch, iPhone and iPad. The focus appears to be on simplifying the click wheel's mechanics

Apple states that "although capacitive sensing devices could work well in portable electronic devices, improvements are still desired, such as thinner and power savings devices."

The patent states that by locating the conductive nodes associated with a structure away from, but proximate to, the structure having the touchable surface, the touch sensing device could advantageously be made thinner because it could eliminate extra space and/or components needed for configurations in which the conductive nodes reside on the touchable surface structure. This could also advantageously result in power savings and improved performance for a reduced number of components.