A pair of new Apple patent applications have surfaced this month at the USPTO that clearly illustrate Apple's research efforts are mounting in the area of motion sensing and motion tracking. The first patent is all about controlling keyboard and gesture command sensitivities to accommodate public commuters while they work. The second is more dramatic and points to a new hybrid motion tracking desktop keyboard. The thing is that the latter is also being considered for use in Apple's MacBook line up. This would eliminate the use of trackpad and need for a touch display. There's no doubt that Apple is pushing hard to find a way to implement gestures on Apple's desktop and notebook products to support OS X Lion and beyond. At this point however, it's a little too early in the game to call the winner. Update 3:20  PM PST: New details have emerged about the motion tracking keyboard and are detailed herein.

The sensitivity of the input device could be reduced in a variety of ways. For example, in one embodiment, an input event threshold associated with the magnitude of a detected measure of input (e.g., capacitance for a capacitive input device) could be adjusted during a motion-based state. In another embodiment, a threshold associated with how long an input must be recognized in order for the input to be recognized as an input event can be adjusted during a motion-based state.

While Apple's current patent focuses on motion input controls pertaining to a MacBook, the patent does indeed apply to iOS devices as is likewise confirmed by their 2009 patent application. Apple's patent FIG. 2 illustrates an exemplary process in which a computing device could determine whether to disregard or process an input event

Further, any suitable type of motion sensor could be utilized in accordance with the teachings of the present invention. For example, a dedicated one-dimensional motion sensor could be utilized in an embodiment in which inadvertent motion of the computing device in only one direction is likely to cause an unintended input to be prevented (e.g., preventing a laptop trackpad from bouncing up into a finger due to inadvertent motion, causing a false tap input event).

A dedicated two-dimensional motion sensor could be utilized in an embodiment in which inadvertent motion of the computing device in either or both of two directions is likely to cause an unintended input to be prevented (e.g., preventing a laptop trackpad from lateral movement due to inadvertent motion when a finger is already touching the trackpad, causing a false gesture or tracking input event).

And a dedicated three-dimensional motion sensor could be utilized in an embodiment in which inadvertent motion of the computing device in any direction is likely to cause an unintended input to be prevented (e.g., preventing an input device such as a trackball from inadvertent contact in any direction with a finger, causing a false trackball movement input event). In another embodiment, the computing device could utilize a three-dimensional motion sensor in accordance with the teachings of the present invention and for other purposes, such as detecting when a computing device is falling in order to park its hard drive and take any other preventive action.

Sensors in Search of Applications

Apple's research and development teams are working with countless types of next generation sensors in search of applications. Beyond motion sensors as described above, we know that Apple is working on an Ambient Light Sensor system in connection with a future 3D version of OS X. We also know that Apple is working with a next generation iSight camera for notebooks that will recognize user gestures. That particular patent is in concert with a wider trackpad, but it doesn't have to be. That's the beauty of research. Cross-pollinating ideas are common. The ambient light sensor patent above describes building these sensors right into the bezel of a proposed future MacBook – which could likewise mean integrating other kinds of motion sensors that would recognize gestures in the bezel.

Desktop: Apple is also working on the next big thing, a leap towards a full pledged virtual keyboard system for a future Apple desktop. And with Apple experimenting with their Magic Trackpad today, their virtual keyboard team will be able to learn and advance their future virtual keyboard project based on what they'll learn from the trackpad. It's a building process. But until we get there, and that could be many years out, Apple has another team simultaneously working on a kind of hybrid keyboard system that will include an advanced camera and motion system.

MacBook: It should be noted at this point that although the patent focuses their communications on a desktop keyboard application using motion tracking sensors, the patent clarifies in patent point # 53 that the "Computing system can be any of a variety of types employing image processing techniques for a motion sensitive mechanical keyboard." Apple's patent FIGS. 13A is in fact a notebook. So that means that the following information applies to both a possible future desktop and MacBook.

A Hybrid Keyboard with Motion Tracking 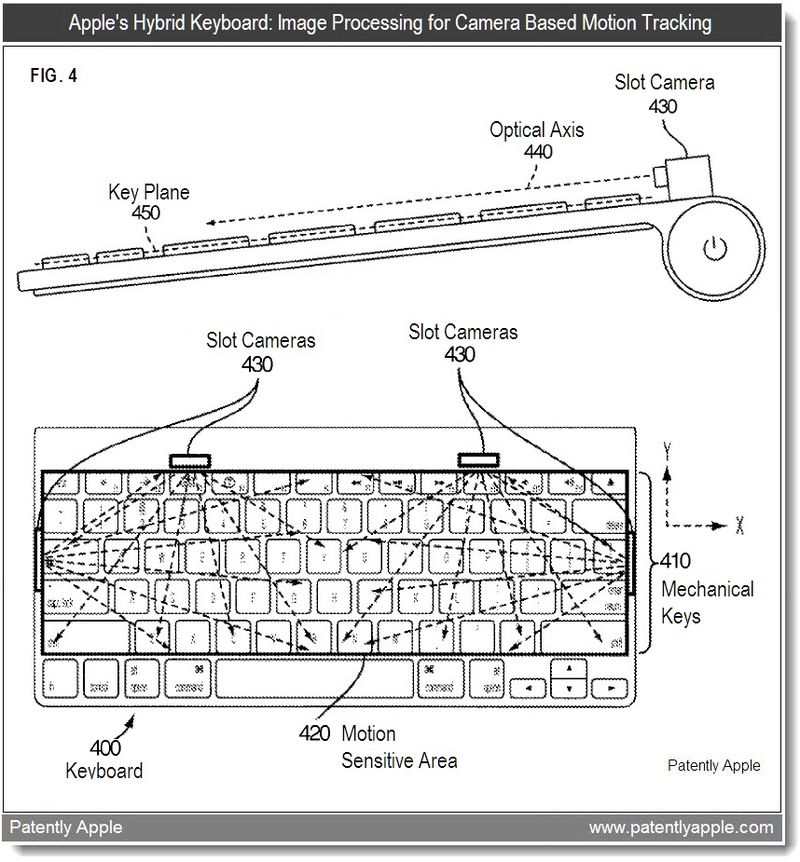 As illustrated in FIG. 4, we're able to see two sets of slot cameras, each consisting of two cameras covering top and side quadrants of each half of the keyboard. The cameras are so positioned to capture the XYZ motion of the respective hands/fingers.

The Camera May be Hidden in the Keyboard

Apple states that the advantage of this slotted camera system is that the cameras are always in the correct position, and could be of low profile and even hidden in the keyboard enclosure.

Additionally, Apple states that Z data could be provided which could be used for cursor input operations that discriminate between hands/fingers resting on keys and the hands/fingers being lifted off keys. In one embodiment, all of the cameras together cover the entire keyboard and could be enabled to sense motion in mouse mode.

Separating the function of the keyboard into two or more distinct modes that the user deliberately invokes has the advantage of eliminating the chance that random or postural changes in hand/finger position could be misinterpreted as a cursor input (e.g., point, scroll, drag, zoom). In this manner, the keyboard doesn't need to determine when the user intends to issue commands to control screen activities (e.g., scrolling) because the user informs the keyboard of the user's intent by switching modes.

In one embodiment, a dedicated "mouse" key could be provided such that mouse mode is entered for the duration that the mouse key is held down. In another embodiment, the dedicated mouse key could include a "sticky" key, such that a tap of the key switches between modes. 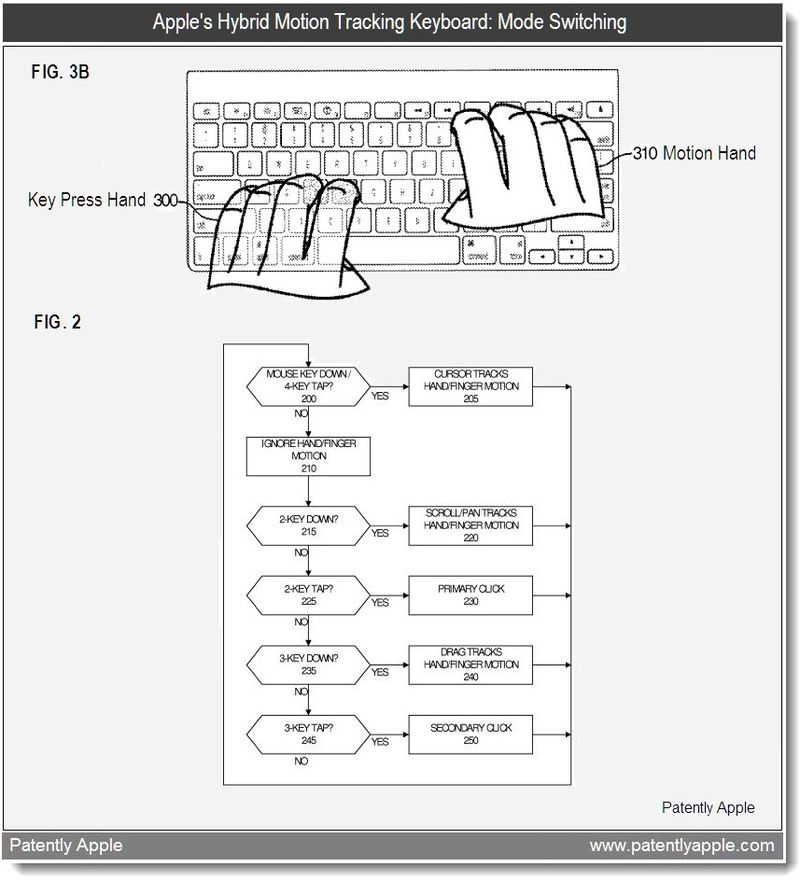 In Apple's patent FIG. 2 we see an illustration of a process for switching between typing and mouse operations using the keyboard. In mouse mode in the illustrated embodiment, the hand that is not being used for pointing or gesturing could hold down a number of adjacent keys (e.g., 2, 3, or 4) while the other hand/fingers move about the keyboard surface and are tracked by the motion sensing circuitry.

The second patent, which was first published on January 13, 2011, was invented by John Elias and originally filed in Q3 2009.

Apple's patent FIG. 4 as noted below illustates a process for seamless mode switching between typing and mouse operations by monitoring the number of fingers touching down on its surface - very much like patent FIG. 2 noted in the earlier illustration above. 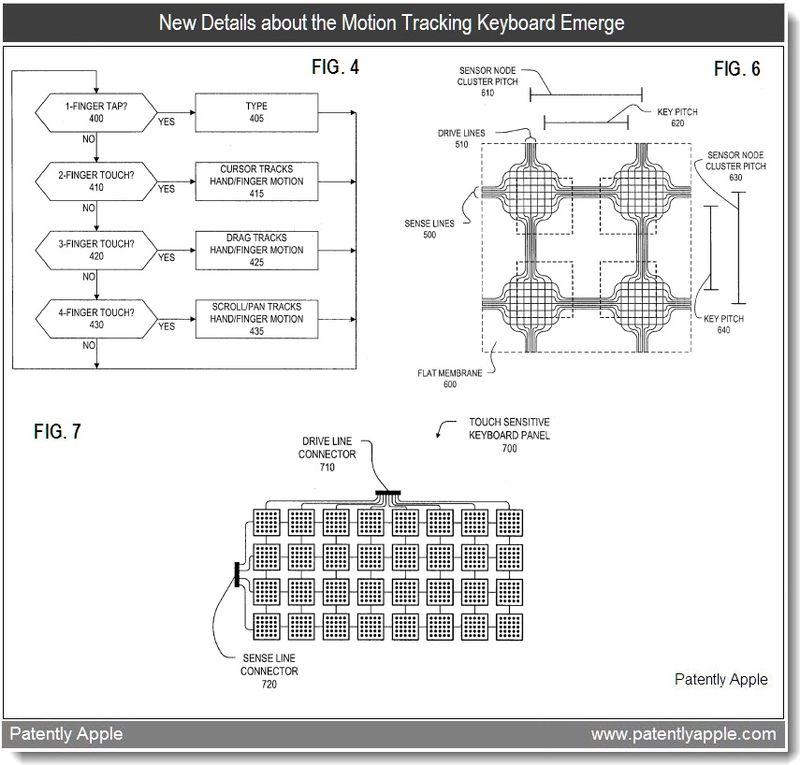 What's new here is the listing of a four-finger touch option that would be able to trigger mouse mode actions of such things as a scroll and/or pan action.

Apple's patent states that hand rotation and hand expansion/contraction gestures could be used for zooming and/or opening files; hand swipes and slides could be used to accellerate operations like text cursor positioning.

Touch sensing associated with the keyboard could be implemented via capacitive sensing using a high-resolution near-field sensor array capable of tracking individual contacts made by each finger tip and hand part touching the keys.

Apple's patent FIG. 6 illustrates and exemplary touch sensitive keyboard membrane that could be embedded into the keyboard. This would allow for sensor nodes to be closer to the edge of the keys and could be configured to have a greater sensing resolution. And lastly, Apple's patent FIG. 7  illustrates the incorporation of "drive and sense lines" into the new motion tracking keyboard.