Apple Gets Closer to a Virtual Keyboard for the iMac + 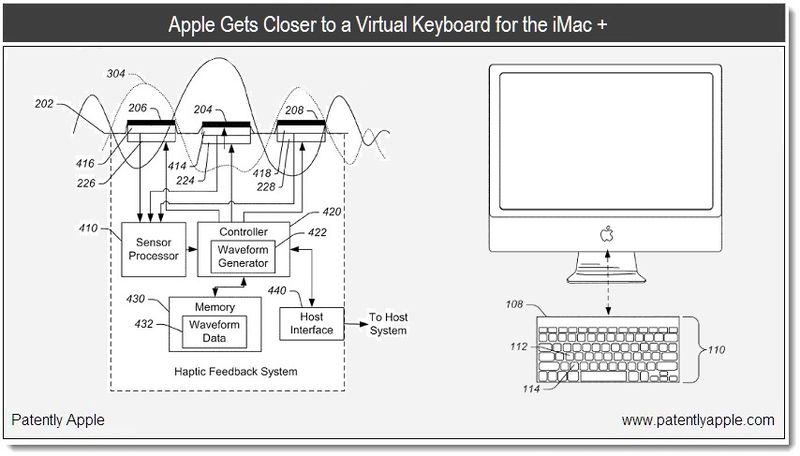 This morning, Apple revealed their research into integrating a display into devices like the Magic Mouse and Trackpad. The same team is also shown to be working on another project that would bring an optional full sized virtual keyboard to the iMac. The patent covers Apple's research into advancing a haptics system that would finally provide users with a sense that the virtual keyboard is in fact a regular keyboard. Of course one of the key advantages of such of a system isn't revealed in this patent, but rather a 2006 patent wherein they illustrate the possibilities of a virtual keyboard morphing into other types of inputs like a gaming pad or a musical keyboard. That's where the real fun begins.

The term "haptic" refers to touch or tactile sensation, and the term "haptic feedback system" refers to a system configured to provide a selective tactile feedback sensation (such as a vibration or other physical sensation, etc.) at a contact location of a surface in response to contact of a user at that location. Such haptic feedback systems include an input surface and one or more actuators (such as piezoelectric transducers, electromechanical devices, and/or other vibration inducing devices) that are mechanically connected to the back of the input surface. Drive electronics coupled to the one or more actuators cause the actuators to induce a selected vibratory response into the surface to which they are attached, thereby providing a tactile sensation to a user.

Many conventional devices, such as touch screen interfaces, have multiple feedback locations provided on a single surface, where typically each contact location will correspond to a user input location. With many such touch screen devices, a single actuator vibrates the entire surface relative to input at any one of several locations on the surface. Such devices offer essentially no localization of the haptic feedback. However, devices have been proposed where multiple actuators are distributed along the surface, each at a separate contact location, to provide some localization to the user feedback. However, because there are multiple actuator inputs into a single surface, the vibration can propagate to other locations, thus limiting the ultimate localization effect.

The problem of propagating tactile sensations from the selected input location to other locations across the input surface (sometimes referred to as "vibratory crosstalk" or "tactile crosstalk") can be especially pronounced in multi-touch systems, such as a virtual keyboard or keypad, a multi-touch track pad, or a touch screen interface, having multiple contact locations. In such systems, the number of actuators can be increased to improve the granularity of the tactile sensation; however, such systems typically still suffer from undesired vibratory crosstalk.

Haptic feedback methods and apparatus are disclosed that use a plurality of individually actuable actuators coupled to an input surface to induce vibrations into the surface, both to provide feedback vibratory response to a user, and also to assist in localizing that feedback vibratory response to the user input location. In response to a user selection at an input location, the system will generate a first feedback signal configured to provide a desired vibratory response to a user. The system will also induce vibrations at one or more other locations to suppress vibratory crosstalk resulting from at least the initial feedback signal. This suppression may range from changing the perceivable vibration response an another location to mask or otherwise obscuring the propagating vibratory crosstalk, to general cancellation (to at least some degree) of such vibratory crosstalk, such as through destructive interference. In some examples, the system includes a controller configured to activate a first actuator of the plurality of actuators to induce the described tactile feedback vibration at a selected contact location of the input surface, and further configured to activate one or more additional actuators to induce a suppression waveform vibration to assist in localizing the first vibration at the selected input location.

Apple's patent FIG. 1shown below depicts a representation of an iMac including an input device in the form of a virtual keyboard 108 with a haptic feedback system configured to suppress propagating vibrations in one common operating configuration. 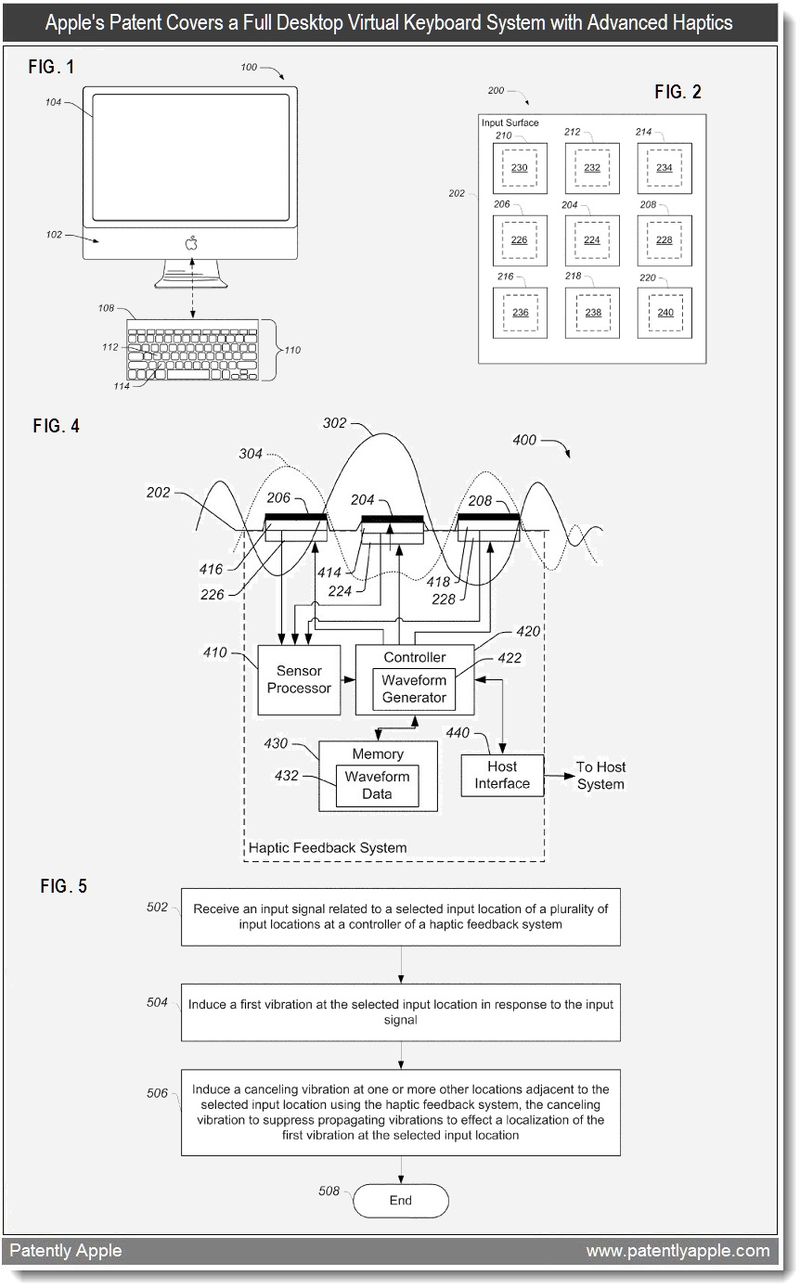 For purposes of the present description the contact locations of virtual keyboard 108 (the virtual "keys") have been outlined and shaded, but any desired surface appearance may be used for the final virtual keyboard.

Apple states that the methods and apparatus described in their patent are applicable to both simpler and more complicated input devices. For example, the input device could be a mouse, a touch screen, a keypad of a mobile communications device, or another type of input interface, etc.

Virtual keyboard 108 includes a plurality of contact locations 110 (in this example, each virtual "key" site). Apple's virtual keyboard is configured to detect user inputs, and to communicate those user inputs to the iMac through a wired or wireless connection. Contact locations can be any location where a user may be anticipated to contact the input device to interact with it.

The patent lightly points to other devices that this could apply to, such as a MacBook. That will make more sense in the coming days ahead.