Apple Considers Integrating a Display into their Magic Mouse 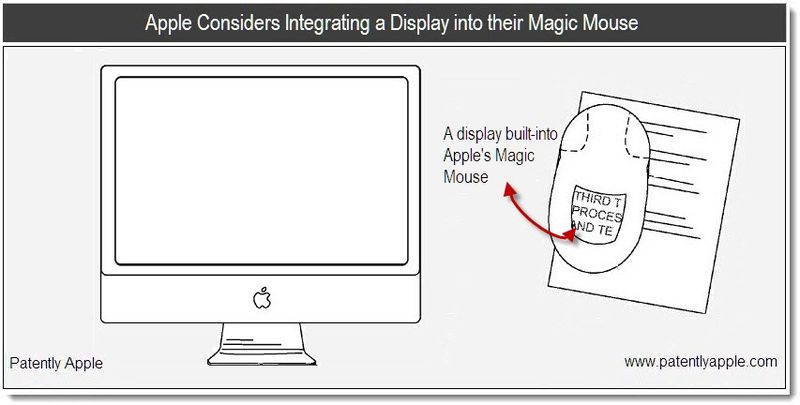 On January 20, 2010, the US Patent & Trademark Office published a patent application from Apple that reveals one of the next chapters for Apple's Magic Mouse. Apple is working on combining the Magic Mouse's touch surface with either an OLED or specialized display surface made of collimated optical glass that contains a unique magnifying capability. The display will be able to display a calculator when in use with Apple's Numbers app or be able to magnify text when using Apple's Pages app. The interface could be used for other applications in the future, and an iPhone keypad isn't out of the question.

In an embodiment, an input device, such as a computer mouse, includes an display device to present observable data to a user. In some examples, the observable data may form a portion of an interface to communicate user interactions to a host system. In some desirable configurations, the input devices will include a collimated glass component configured to translate an image from the display device to a surface of the input device, for example, an outer surface. In such examples, the collimated glass component preferably includes a plurality of fused optical fibers and an input interface, and the fused optical fibers convey optical data, such as image data, from the input interface to the outer surface of the collimated glass component.

Because of the uniform arrangement of the fused optical fibers, light and light patterns (i.e., images) entering the optical component at a first surface are generally uniformly transmitted through the component, and appear at the surface at the other end of the component. Additionally, the collimated glass component need not be uniform, but, for example, the individual fibers may be expanded along their length, thereby fanning out to a larger surface, and thus presenting a larger output image than the image input to the component.

In other examples, either a smaller or a larger portion of the mouse shell 108 may be formed from collimated glass. Also, certain display types, such as OLED displays are capable of being constructed of flexible components, further facilitating use on non-planar surfaces. And, in some examples, the image data to be presented on the display device may be stored in the mouse. 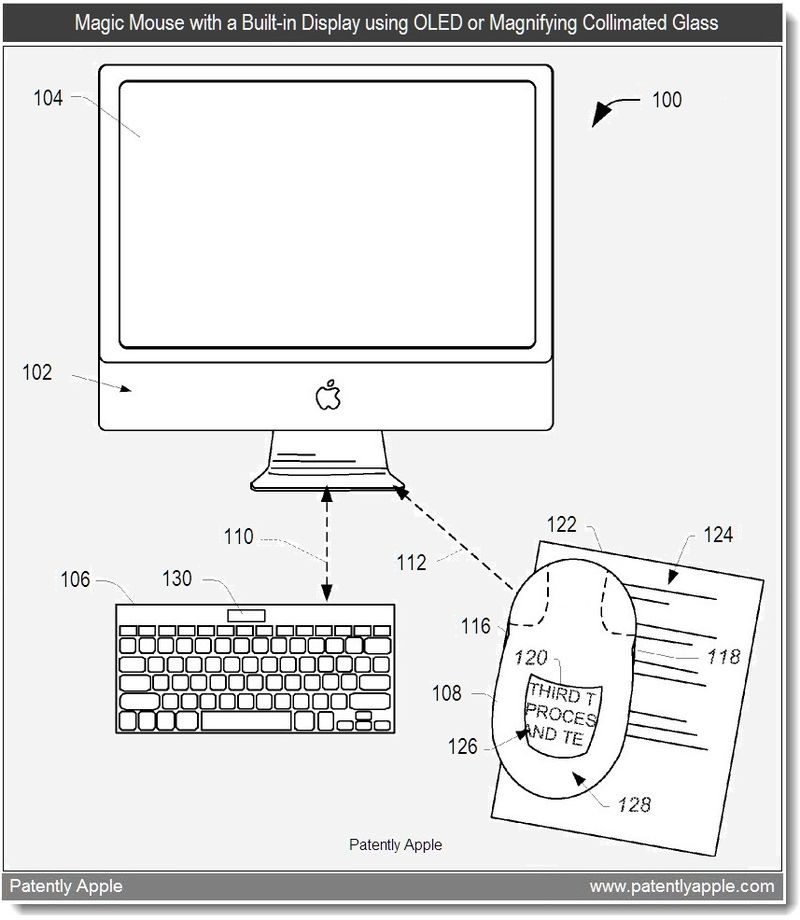 The Display Could Illustrate Virtual Buttons, Text and/or Video

Although a wide variety of applications are possible, as just a few examples, the displayed image data might include one or more of text, input locations such as virtual buttons, still or video images, and colored light that is either static or changing. As an example, soft-key information, such as text labels, could be displayed, for example, adjacent to left and right touch sensitive regions 116 and 118 to provide labels indicating functionality available by selection through such regions. 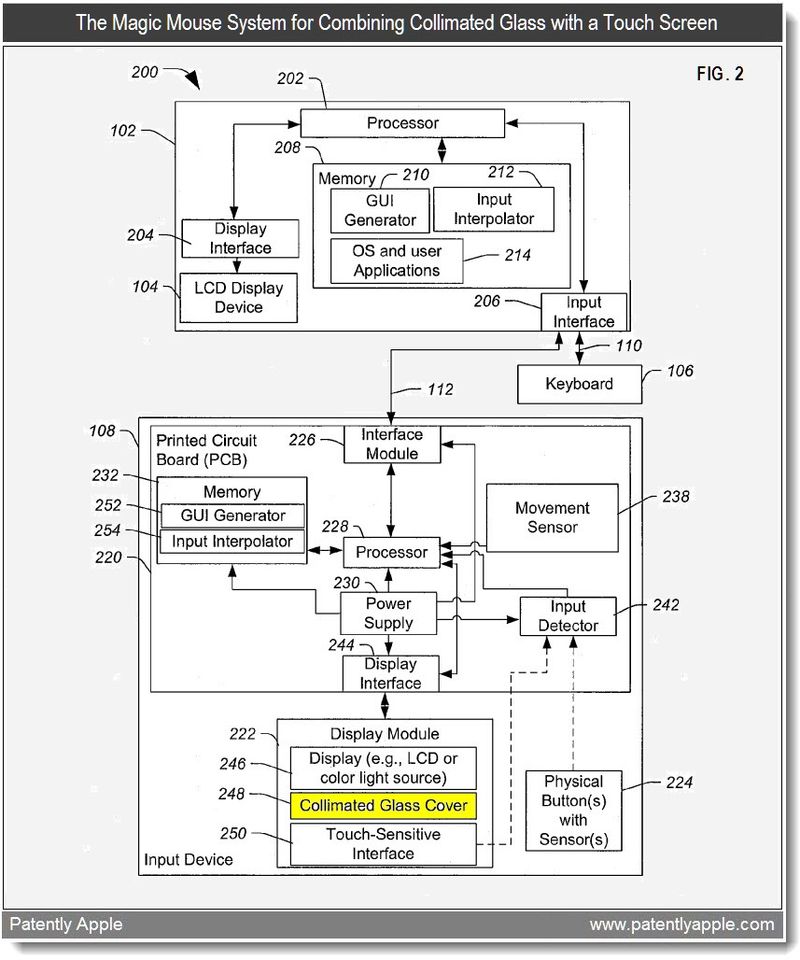 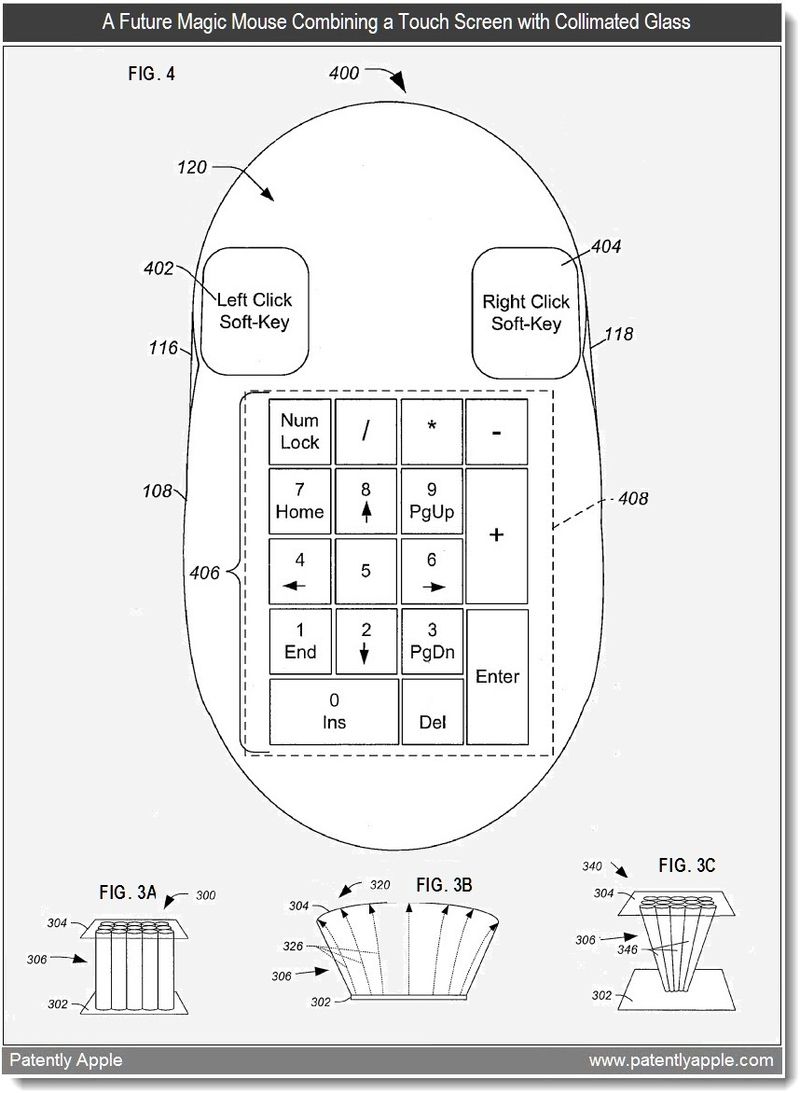 The Magic Mouse May Sport an iPhone or Numeric Keypad

Through the combination of the display of keypad 406 in association with a touch screen interface, user inputs corresponding to the keypad may be provided through the touch screen interface. This would be great with Apple's Numbers or Microsoft's Excel applications. As one example of operation, a user might select a calculator function. This example of course would also hint that we'll also be able to use it as an iPhone interface for outgoing calls.

Could Work with Apple's Pages or iPhoto Too

To expand upon the depicted example, in response to another user input, this future Magic Mouse might display a first set of one or more images (for example a first set of icons) representative of a first set of inputs under the touch screen interface if a word processing program such as if Pages was an active window on the computing system.

As yet other alternatives, a user could elect to display one or more photos or videos, or even just colors or abstract patterns through an input surface. The capability of the collimated glass component to translate an input image to another size, shape or configuration for display provides a wide range of options to improve the user experience of an input device.

Apple's patent lastly points to the fact that the combination of a touch screen and collimated glass may be used in other future iterations of the iPhone, iPod touch, a MacBook trackpad or other stand alone devices. The patent also points to the Magic Trackpad as being another possible device that could utilize this technology in the future. The patent covers that implementation under the category of "Graphics Pad."

I think that collimated glass is used for cameras, no? If so, could we see a scanner application here? I also like the idea of adding a photo (like Chance mentioned) to the finish of the Magic Mouse so that we could personalize it. Why not. Who wants a white mouse anyways.

Didn't see that one coming. Good catch and great idea. I'm not even sure that Apple thought of that one. But yes, it's doable if used with photos like the patent points out.

Imagine being able to add your corporate logo on this mouse. Well, you could according to this patent. Yep. It works with iPhoto. So it could be used to customize the look of the mouse and everyone likes to do a mod of their stuff. I'd LOVE to do that.

Some guy over at MacDaily mentioned in a comment about the odd chance it could act as a tiny scanner for business cards or small graphics. Wow, would i dig that!