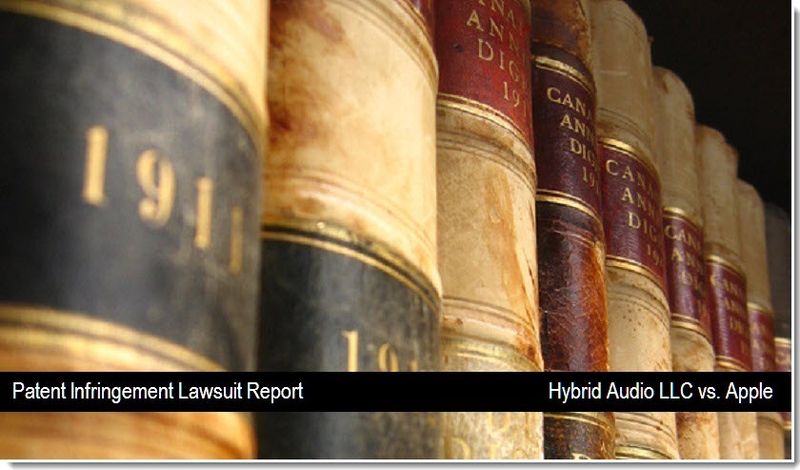 A company by the name of Hybrid Audio LLC has filed a patent infringement lawsuit against Apple, HTC, Exedea and Dell in the U.S. District Court, Eastern District of Texas. The lawsuit claims that Apple's iPod Nano, iPhone 4, iPad, MacBook Pro and the iTunes service are in violation of Hybrid Audio's patent which is supposedly related to the MP3 standard.

According to court documents, Hybrid Audio holds all right, title, and interest in and to US Patent RE40,281 ("the '281 Patent" or "the Patent"), entitled "Signal Processing Utilizing a Tree-Structured Array." It should be noted that the patent in question lists Aware Inc., as the assignee. The connection between Avid and Hybrid Audio, if any, is unknown.

Hybrid Audio's complaint states that they believe that Apple has infringed and is infringing on their '281 Patent, by engaging in acts constituting infringement under 35 U.S.C. § 271, including, without limitation, making, using, selling, offering to sell, and/or importing in or into the United States, without authority, devices and services, including, but not limited to, the iPod nano, iPhone 4, iPad, MacBook Pro, and iTunes service that contain or use hardware and/or software for processing audio information in accordance with the MPEG-1 Layer III (MP3) standard.

On information and belief, Apple has contributed to and will continue to contribute to infringement of the '281 Patent, in this District and elsewhere within the United States. The underlying acts of direct infringement are performed by users of Apple devices and services, including, but not limited to, the iPod nano, iPhone 4, iPad, MacBook Pro, and iTunes.

On information and belief, Apple has induced and will continue to induce infringement of the '281 Patent, in this District and elsewhere within the United States. The underlying acts of direct infringement are performed by users of Apple devices and services, including, but not limited to, the iPod nano, iPhone 4, iPad, MacBook Pro, and iTunes.

As part of their compensation, Hybrid Audio is seeking a judgment and order requiring each Defendant named in the lawsuit to pay Plaintiff damages including treble damages for willful infringement. 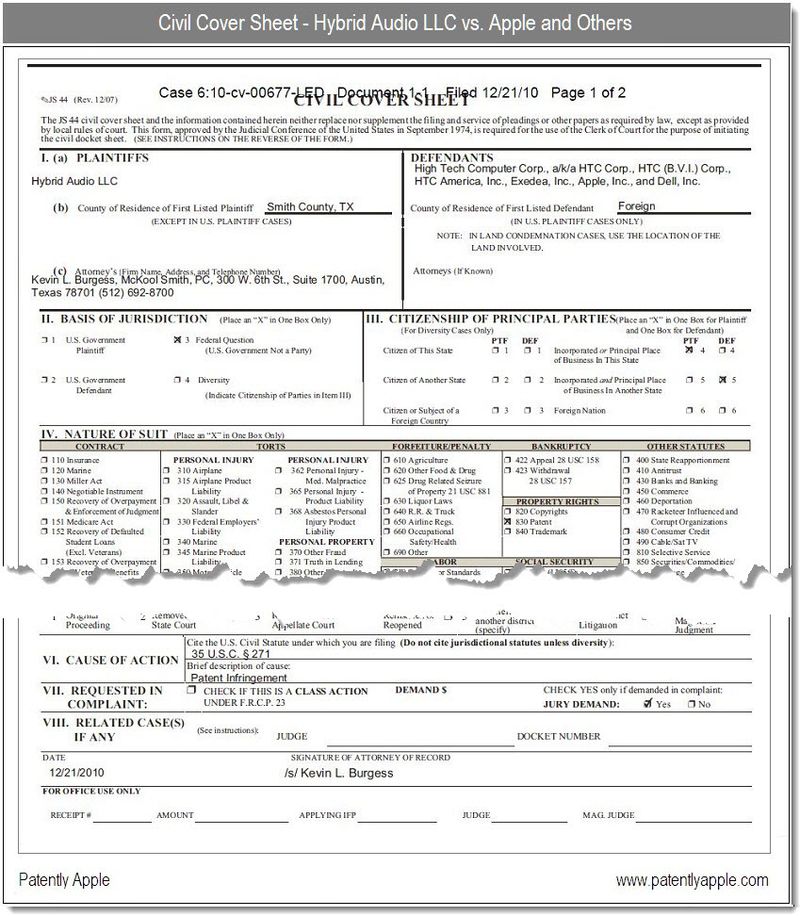 Hello, I am really glad I have found this webpage. I learn a lot from here. Thanks.

Here are a couple of the claims from the asserted '281 patent. I'd hate to have to explain this technology to a jury:

3. A communication system for sending a sequence of symbols on a communication link, said communication system comprising a transmitter for placing information indicative of said sequence of symbols on said communication link, said transmitter comprising: a clock for defining successive frames, each said frame comprising M time intervals, where M is an integer greater than 1; a modulator modulating each of M carrier signals with a signal related to the value of one of said symbols thereby generating a modulated carrier signal corresponding to each of said carrier signals that is to be modulated and generating a sum signal comprising a sum of said modulated carrier signals; an output circuit transmitting said sum signal on said communication link, wherein said carrier signals comprise first and second carriers, said first carrier having a different bandwidth than said second carrier; and a receiver comprising: an input circuit for receiving and storing M time-domain samples transmitted on said communication link; and a decoder for recovering said M symbol values, said decoder comprising a tree-structured array of sub-band filter banks, said received M time-domain samples forming the input of a root node of said tree-structured array said .[.decorder.]. .Iadd.decoder .Iaddend.and said M symbol values being generated by the leaf nodes of said tree-structured array .[.decorder.]. .Iadd.decoder.Iaddend., each said sub-band filter bank comprising a plurality of FIR filters having a common input for receiving an input time-domain signal, each said filter generating an output signal representing a symbol value in a corresponding frequency band.