Apple's Next Iteration of MagSafe May Include Fiber Optics 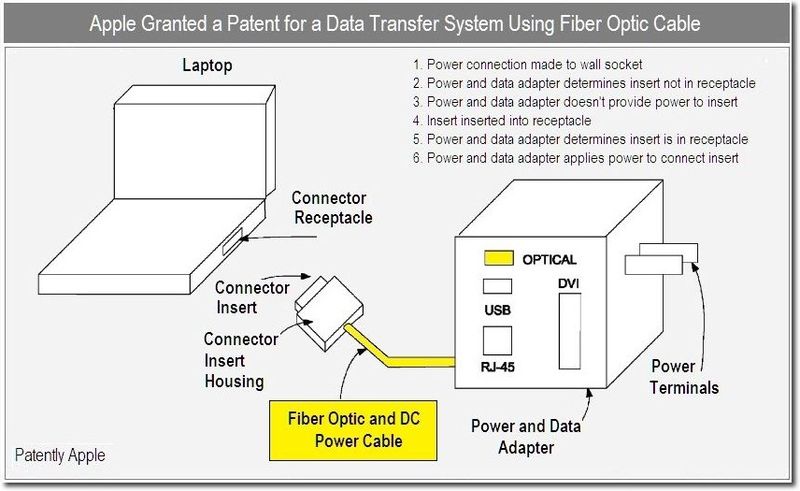 One of the surprise patents of the week came in the form of a granted patent. The surprise is that the patent went under the radar as an application so as to keep it from being publicized. We now learn that Apple has a new power and data transfer system in the works and it'll likely come in the form of an upgraded version of MagSafe. The patent was originally filed a year prior to Intel announcing that they were working on a next generation I/O called Light Peak. For all intents and purposes, this seems to be the patent to confirm that Apple had this technology well under development prior to Light Peak's announcement. At the end of the day, the new I/O promises us a means of rapidly recharging our mobile devices while wildly-accelerating our data transfers.

In a YouTube video released by Intel in October 2009, Jason Ziller, head of Intel's optical I/O Program on Light Peak stated the following: "This new technology is a new optical cable technology designed to connect all of your electronic devices together, such as disk drives, peripherals, displays etc. It runs at very high speed. Its bandwidth starts at 10 Gbps and has the ability to scale up to 100 Gbps over the next decade. And because it's optical, it allows you to run it on smaller connectors and very long cables such as a 30 meter cable." Mr. Ziller goes on to state that "another benefit of this technology is it has the ability to run multiple existing I/O protocols simultaneously on a single cable."

The video was first covered in our report titled "Intel IDF 2009: On the Cusp of a Whole New Industry." In that report we pointed to a factoid from Engadget that stated that Apple had actually "brought the concept to Intel." In a granted patent of Apple's published this week, we were able to see that a September 2008 patent filing was made that indeed discusses a new fiber optic data and power transfer system that in fact mirrors all that we've heard about Light Peak. Whether this ends up to be Light Peak or Apple's version of it is irrelevant being that either way we'll be the beneficiary of faster recharging and data transfers.

These connections may include one, two, four, or other numbers of fiber-optic cables. In a specific embodiment of the present invention, four fiber-optic cables are used, where two cables are used for data transmission and two are used for data reception. A specific embodiment of the present invention provides four such contacts, two for a power supply voltage and two for ground connections. This allows relatively high currents to be provided to the mobile device, enabling rapid battery recharging.

The power and data adapter may provide and receive data to and from other devices using fiber-optic cables, or other types of wired or wireless connections such as Local Area Networking (LAN), Universal Serial Bus (USB), Digital Visual Interface (DVI), DisplayPort, IEEE 802.11 a, b, g, or other types of connections. 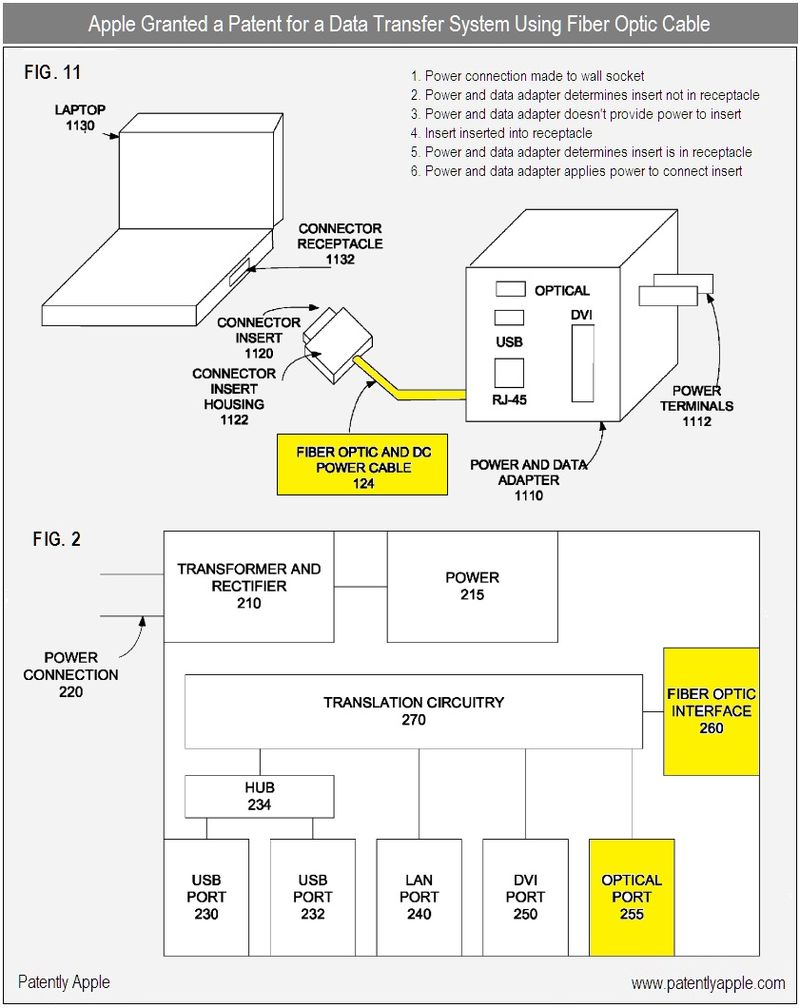 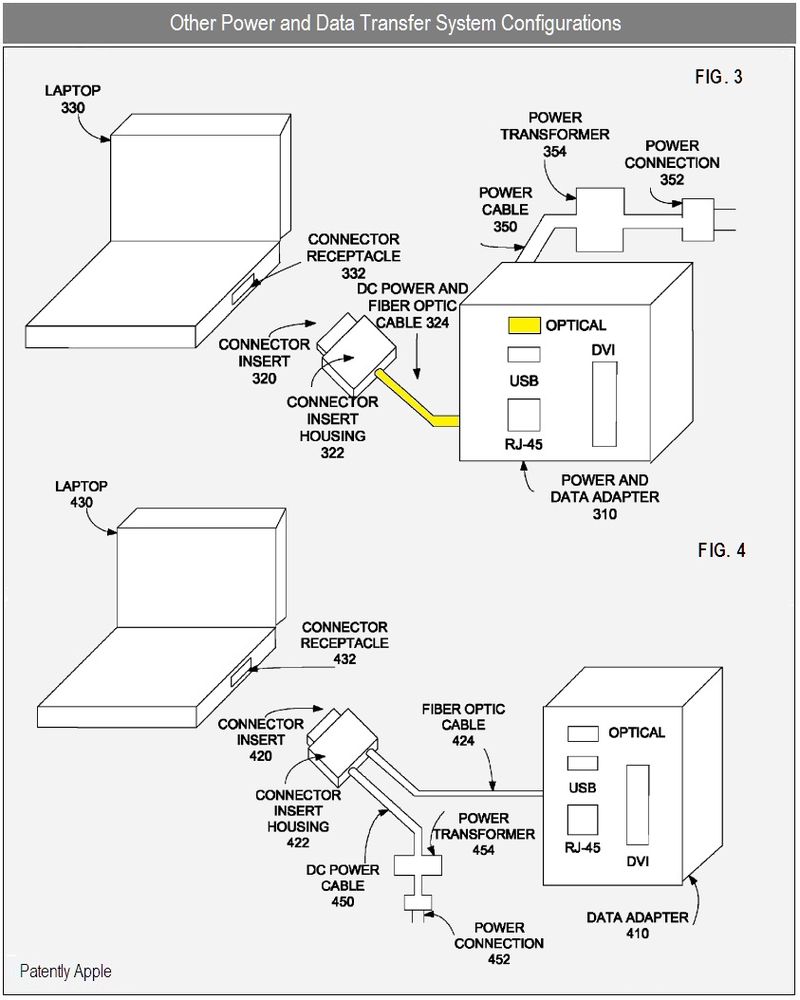 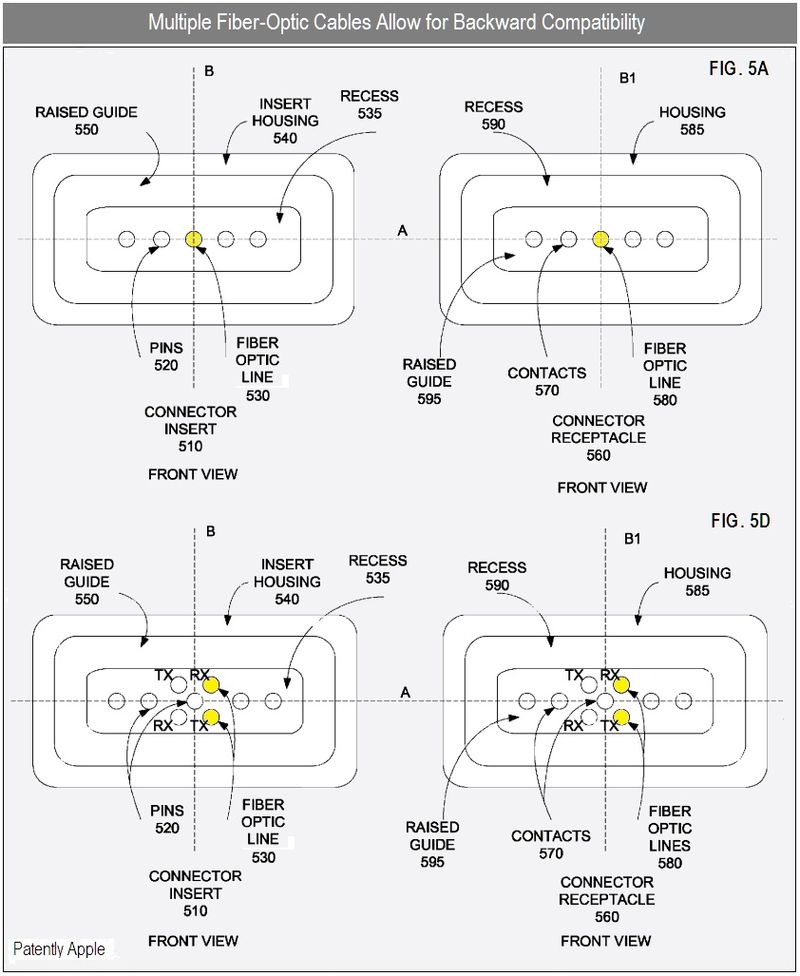 Apple's states that the advantage to this is that it allows backward compatibility with currently available connectors and receptacles that are discussed in Apple's U.S. granted patent 7,311,526 covering MagSafe. This would support another recent patent of Apple's that we covered in our report titled "Apple Considers MagSafe for Portable Devices like the iPad" – (see graphic below). This recent patent certainly sheds light on the matter by providing us with more context.

This is the first real mention specifically of optical connections in this much detail, pointing to Light Peak as far as I know. CES and IDF 2010 videos both had Intel saying 2011 for OEMs and general release (with one of the manufacturers involved saying 2011 also as they were gearing up this year) - then apparently Intel backtracked.

Makes sense to go via USB3/ MagSafe. Given the daisychain and star possibilities of Light Peak, it's great to see that the patented device can basically convert (both ways?) from DVI or other IO to optical LP I/O.

If ever Apple was going to change from 30 pin, it'd be to this new LP containing connector type presumably - it'd be hard to put LP into the current 30 pin, but doable either by a USB3/LP hybrid cable or MagSafe connection. They must be working hard on reducing the footprint of the converter box - you can see the difference 2009 vs 2010 - if that could fit into an ATV/Mac Mini that'd be amazing.

LP might not fit into an iPhone, or iPod Touch (yet) but if they wanted to (and discounting cost) - there's enough space in the iPad to actually push it to LP - around the batteries there is empty space, enough to add the components for LP.

Syncing a 64GB iPad with movies over LP from a LP Mac? Now that would sell systems!

One things for sure, LP can't be written off next year.