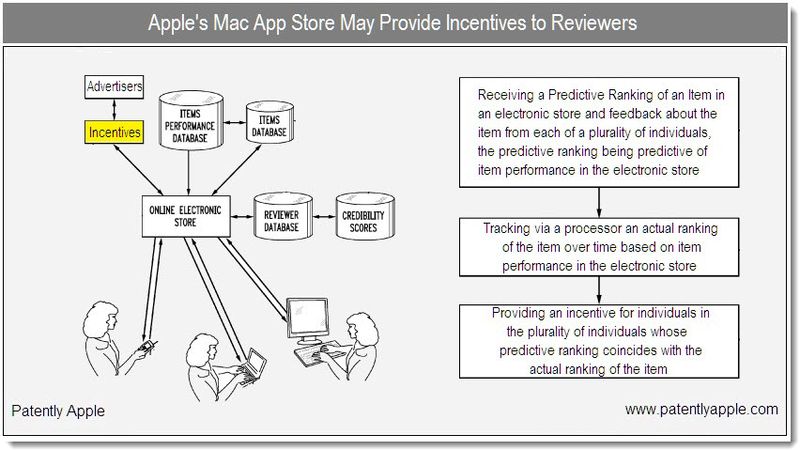 Do you think that you have the right stuff to become a great product reviewer for Apple's New Mac App Store? Well, it appears that Apple wants to upgrade their app reviewing process to provide a real community-based predictive ranking system for products that small business owners and productive consumers could come to rely on for rich reviews beyond just paid hype. However it's a double-edged sword because the public reviewers will also be compensated for their work in a number of ways. Apple's system could be interesting over time, as this system is based on the number of accurate reviews over time. This is a complicated system but one that marketers and commissioned salespeople could understand. But if you think you're cut out for this, then it may be worth investigating.

Online electronic stores are becoming more and more common. Online stores can be directed to the general public or to owners of specific devices. These online stores offer a variety of items in order to serve the needs of as many potential customers as possible. These items can include media files, applications, books, etc. Item quality can vary widely. Popular taste also varies widely. Some items of only standard quality can become extremely successful while other outstanding items go unnoticed. Oftentimes these online stores don't offer adequate preview mechanisms for these items, so potential customers don't know if a particular item could fit their needs and/or wants.

An example perhaps best illustrates this problem. Consider Jane, a small business owner, who is looking for a mobile accounting program that can sync with her small business accounting program. Jane browses the online store and finds three different applications that purport to meet these requirements. However, Jane is uncomfortable paying for one without knowing if it will really do what she wants it to do.

The promotional information provided by each manufacturer gushes about how fantastic each application is. In order to sort out which one best suits Jane's needs, she must do extensive research to find unbiased information if the online store does not aid her. Often, if Jane is researching online she must browse away from the online store and may decide to purchase the accounting application from another vendor. It is in the interest of the online store to provide as much information as possible for Jane so that she can make an informed decision and purchase the software from the store and not elsewhere. One way to approach this problem is to allow individuals to review applications for functionality, ease of use, safety, speed, accuracy, and/or various other criteria.

If the electronic store delegates this task to a large group of users, or "crowd sources" the task, it will save money which would otherwise pay for full-time staff reviewers. The problem with this approach is that not every reviewer is as trustworthy as the other and customers end up frustrated because they must spend a long time sorting through reviews to determine which ones are sufficiently detailed, unbiased, well-written, and otherwise generally useful. The online store can provide a credibility or trustworthiness score for reviewers based on some metric. An aspect of this patent is to provide a mechanism of identifying quality reviewers by their ability to accurately predict the sales performance of an item in the online store prior to actual sales and/or availability of ranking data.

What is needed in online stores is an improved method to allow customers like Jane to feel confident in their online store purchases without the need for hiring expensive testers or reviewers.

Gathering Feedback and Rankings from Reviewers

Apple's patent FIG. 2 below illustrates an example predictive ranking history for applications. In this example, three persons labeled A, B, and C, are reviewers for the electronic store. At time T1 202, the reviewers submit their predictions for the question "Will App1 be in the top 10 in the online store?"

The reviewers have an opportunity to download and test or use all or part of the application. In this manner, the reviewers can provide an intelligent prediction of its ranking. In this example, once the application is actually sold through the online store, its ranking was high. Thus, the answer to the question is yes, indicating that it will at a later point in time be in the top 10 in the store. Persons A and B correctly predict yes and C incorrectly predicts no. The electronic store assigns 1/1 or 100% credibility to A and B and 0/1 or 0% credibility to C. 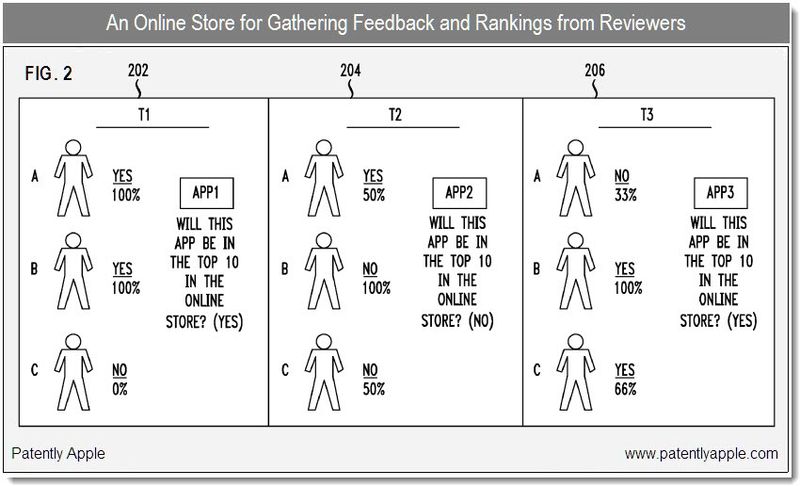 Next, at time T2 204, the reviewers submit their predictions for the question "Will App 2 be in the top 10 in the online store?" In this example, the eventual answer to this question is no, indicating that it will not be in the top 10 in the store at a later point in time. B and C correctly predict no and C incorrectly predicts yes. The electronic store assigns 2/2 or 100% credibility to B, 1/2 or 50% credibility to A and C.

In some situations, an electronic store's offer of an increased credibility score is not enough to motivate sufficient numbers of individuals to review products. An electronic store can also offer cash incentives to successful reviewers. Monetary incentives are not integral to the invention and other tangible or intangible incentives can be substituted, such as credibility points, exclusive media (such as songs, photos, user icons, etc.), and others.

Apple's patent FIG. 3 illustrates an example predictive ranking credibility and compensation table. The steps outlined in this example are non-limiting. This example shows four reviewers 310, A 302, B 304, C 306, and D 308. Each reviewer, after sampling the media in question, makes a prediction of its maximum chart position 312. The sampled media can include audio, video, still pictures, software application, websites, games, and so forth. A predicts that the sampled media will reach number 17, B predicts number 1, C predicts number 50, and D predicts that it will not even break in to the top 100 chart. The actual ranking of the song 314 based on sales performance in the online store is 11.sup.th place. The system can measure actual performance based on sales in the online store, one or more external source (such as the Billboard Top 100 list), some other metric(s), or a combination thereof. A combination of metrics can be weighted or unweighted.

A Way to Reduce Prediction Inflation

One possible way to encourage accurate predictions or to reduce prediction inflation is to provide asymmetric incentives and disincentives for going over or under the actual ranking. For example, if the actual chart position is 10, the award for under predicting chart position 15 can be greater than the award for over predicting chart position 5. In this example, the weights are based on the collective performance of all a group of reviewers. The system can assign weights without relying on other reviewers.

Apple's patent FIG. 4 below illustrates a sample online store for gathering feedback and rankings from reviewers. The online store can notify users 404a, 404b and 404c that an item is available for review. Would-be reviewers can request to review a specific item in the online store. Users can interact with the online store wirelessly with mobile devices, with laptop computers, desktop computers, or with any other suitable computing device over any type of wired or wireless data connection. 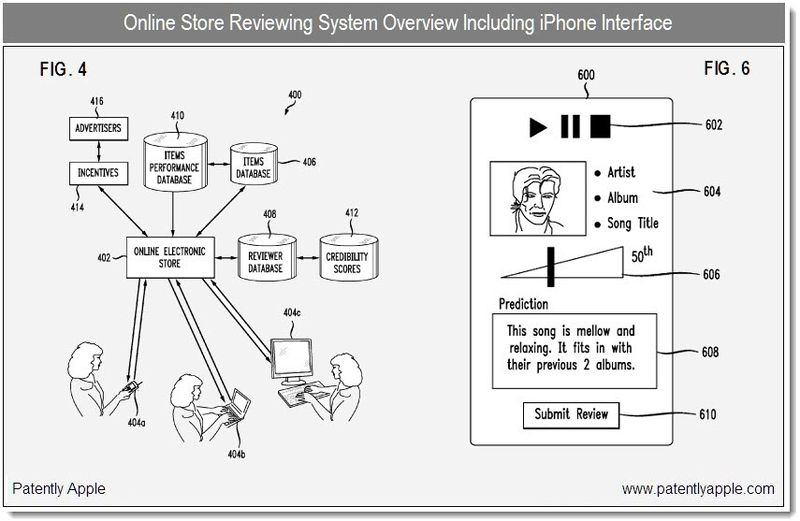 Once the reviewers receive the item to review from the online store, they can use or sample the item. Reviewers can then use their judgment to predict a ranking for the item in the online store and provide a review or feedback. The ranking can be as simple as a chart or sales position. The ranking can be tied to a specific time frame, such as a reviewer predicting that the item will be in the top 10 chart for at least 5 consecutive weeks. The review can be somewhat more detailed, with a description of features, ease of use, speed, performance, accuracy, etc. The reviewers transmit their predictive ranking and reviews to the online store which stores them in a reviewer database.

Apple's patent application 20100332296 has much more details if you're interested in this future opportunity. Apple credits Sam Gharabally as the sole inventor of patent which was originally filed in Q2 2009.