In September of this year Apple introduced us to a new Spiral based iTunes UI and provided us with a nice overview. Today, Apple opens the gate wide open and shows us that the new Spiral interface is to replace their current Cover Flow in iTunes. The new design will work with both standard and Multi-Touch displays and is likely earmarked for OS X Lion due out next summer. The new user interface will look really cool on Apple's iPad for the latter half of 2011. Major Update Dec. 17, 2010 2:35 PM:  We've just added a Spiral's-like demo to our report that works nicely with Photos. You just might want to check it out!

Even as computer processors are becoming faster and programs more capable, space on computer displays continues to be limited. As programs become more complex there is a need to display more information in the same limited space. 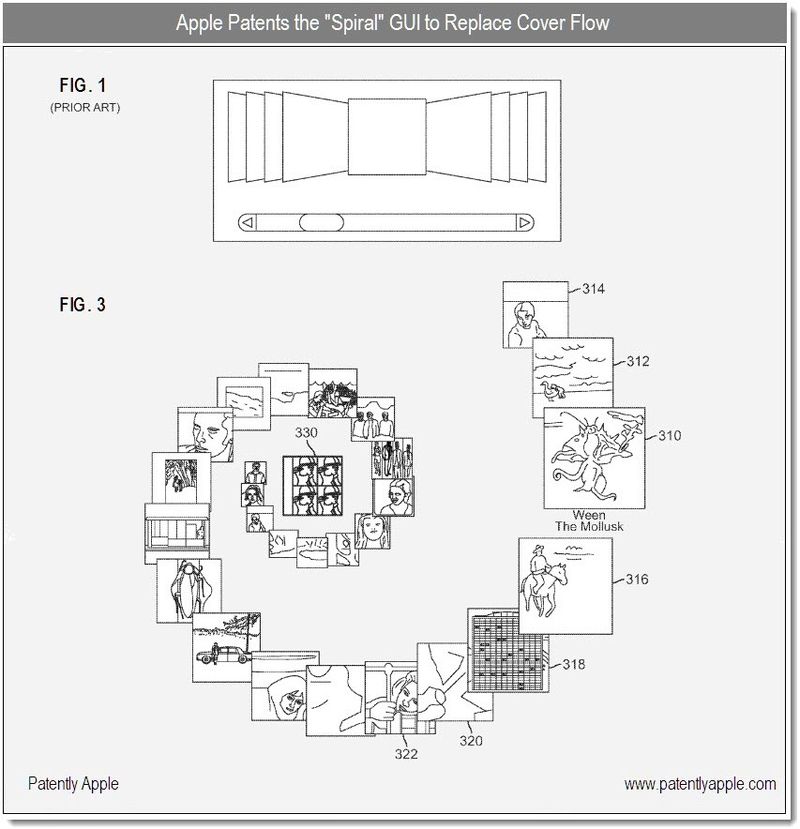 Apple's patent FIG. 3 illustrates one example of a graphical user interface. An ordered list is displayed as a receding spiral in a virtual 3-D space. Each item has a position on the screen as represented by X, Y and Z Cartesian coordinates. In general, in this embodiment, icons that appear larger, have a lower value on the Z-axis, are more proximate to the currently active file 310. An "active file" could be a file that is presently opened or in use, but in some embodiments it could simply be a file that is selected by the user.

Icon 330 could be a song, data or other media file from which a playlist is generated automatically. One example of similarity data is known as GENIUS and is part of Apple Inc.'s media management software iTunes. 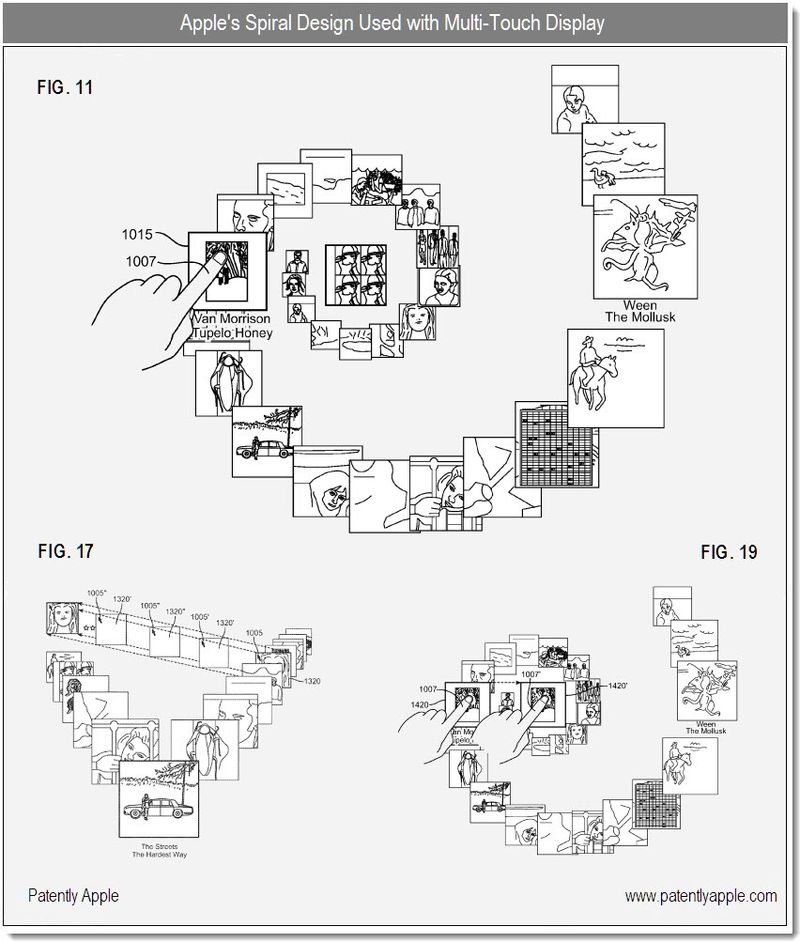 Apple's patent FIG. 11 illustrates a touch input embodiment while FIGS. 17 and 19 illustrate the user rearranging objects on a touch display (though it could also technically work in concert with a mouse).

As you could see below, Apple is also reserving a "receding V" design. This could be used in the Finder for file searches and viewing documents. It's less drastic than the spiral design and would likely be more appealing to the business user. Additionally,  the patent presents us with one last interface design, though it's very much like the one used in "Time Machine." I think that such a design would somewhat contradict the very principles associated with the Spiral or receding V designs. It would simply be too restrictive and not much better than what we have today with Cover Flow. 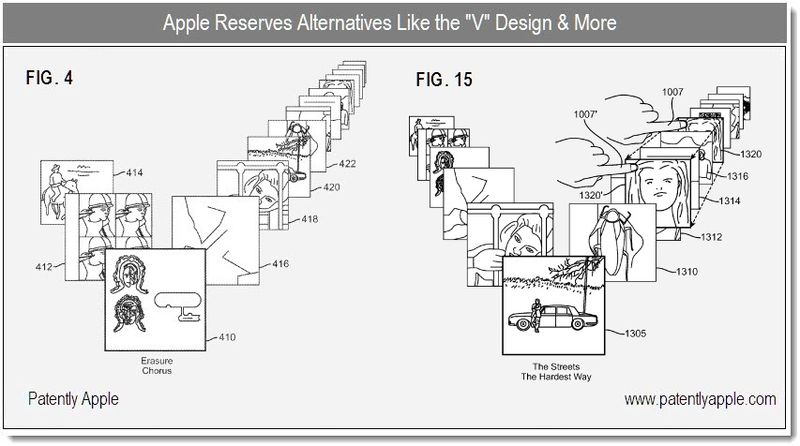 In FIG. 15 we see that the designs, be it the spiral or v-shape is being designed to work with Multi-Touch displays. Apple's patent points to both handhelds (iOS devices) and the desktop (iMac/Mac Pro) though I'm sure it extends to the MacBook as well. The user in FIG. 15 is definitely using their hand and not a magic trackpad or mouse - though technically, a mouse could perform these tasks.

At the end of the day, I think that both the sprial and receding-v designs have their place. The receding-v design would appear to be a natural for replacing Cover Flow in Apple's Finder. It's not overly drastic and would provide us with a superior viewing angle, which is the purpose for the change to begin with. Apple's proposed Spiral design is more geared for iTunes. Apple could simply make it another viewing option or replace Cover Flow. It appears to be geared for a touch display like the iPad where it's better suited. It would provide more room to maneuver than an iPhone. So it'll be interesting to see how Apple introduces these new UI elements in the future. Above is a screenshot of the Memory Life Spirals UI.  When you run the link to the demo, note that there's slider bar above the Spirals Blue icon. Slide it slowly right and watch the Spiral in action. Just let go and the photos stop spiraling. Is that cool and fast, or what! Now that I've seen it, I want it! Though for now you could only get it at Memory Life. I have no idea how Apple will work around this working app, but our friends at Memory Life just might be getting a phone call from the Big Man in Cupertino (ha!). My thanks to Fabien Voyer from "Memory Life" for the heads up on their app which will be available in English in January. 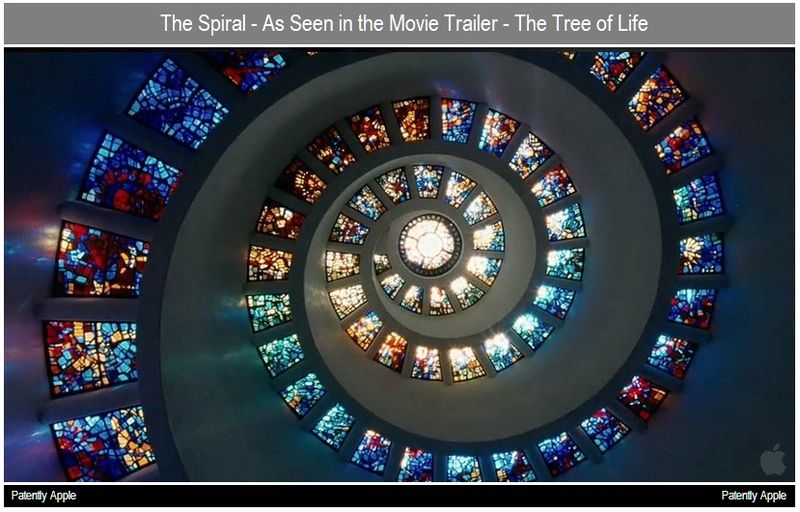 This scene was taken from the 2011 Summer movie called The Tree of Life, starring Brad Pitt and Sean Penn. It appears at the 1:39 mark of their movie trailer (Fox Searchlight or Apple Movie Trailer). Hmm, it's starting to add up like an X File (Ha!).

This looks really cool, I hope it makes an appearance in both iOS and Mac OS X Lion.