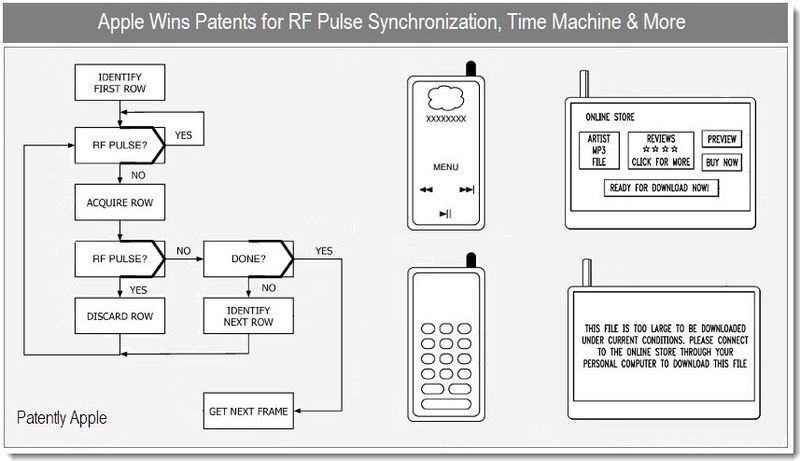 The US Patent and Trademark Office officially published a series of nineteen newly granted patents for Apple Inc. today. Within this second round of notables we point to Apple winning a series of patents relating to the iPhone and iTunes, an additonal two patents covering Apple's Time Machine backup software and perhaps the most important of all in this lot, is one relating to 3G ready iOS devices utilizing RF Pulse Synchronization in conjunction with GSM. Although it may be considered a little nerdy, it's also vital telephonic related technology like this that Apple may find handy in their current and/or future smartphone battles. In fact, it's been rumored that Apple is trying to gain some of Nortel's patents at this very moment. The battle for LTE hasn't even begun yet and Apple is out to acquire some of these vital patents to support their future LTE based iPhones and other future devices.

Firstly, Apple lays out the problem that their patent is out to solve: In portable electronic devices such as mobile telephones and personal digital assistants ("PDA") that use a touch-surface for user input and that also generate radio frequency ("RF") pulses for communication, there is a problem in that touch-surface data acquisition can't reliably or accurately occur during RF pulse transmission. This is primarily due to two factors. First, the power required to generate an RF pulse could cause a voltage drop large enough to interfere with the normal operation of a touch-surface's data acquisition circuitry. Second, the resulting RF pulse could generate sufficient electrical noise to interfere with the acquisition of touch-surface data.

Another complicating factor in devices of this type is the need to generate RF pulses at a rate that is more frequent than the time it takes to capture a complete image from the touch-surface. By way of example, mobile telephones conforming to the Global System for Mobile Communications specification (e.g., GSM 05.01, version 8.4.0) transmit RF pulses approximately every 4.6 milliseconds, with each pulse lasting 577 microseconds for voice transmission or 1,154 microseconds for data transmission. Touch-surface image acquisition operations, however, may take more than the inter-pulse duration allowed by such specifications. Thus, it would be beneficial to provide a means to mitigate the operational interference to touch-surface data acquisition operations in portable electronic devices that generate RF pulses. 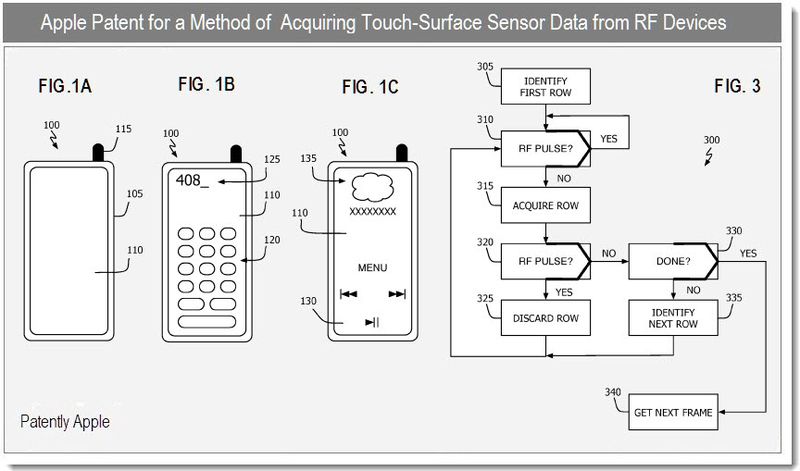 In Apple's patent FIG. 1A we could see Antenna 115 which is used to transmit and receive information in accordance with Global System for Mobile Communications (GSM) standards. Figures b and c are simply to illustrate that the invention is relating to a multifunctional smartphone what could act as a PDA and MP3 player. It's FIG. 3 which is at the heart of this patent which shows in-part the method in which the iPhone deals with RF pulsing fingerprint of the GSM standard. It's not a pretty patent but it's one of many technologies that Apple has to account for when designing their next generation smart-communication devices.

Apple has been granted a pair of patents relating to their easy to use Time Machine Backup program. There was once a rotisserie infomercial on TV that had the slogan: "Set it – and forget it." Well, that's how simple Time Machine is to set up on your new Mac. That aside, Apple's first granted patent relating to Time Machine today is entitled "Navigation of Electronic Backups" while their second granted patent is entitled "Conflict Resolution in Recovery of Electronic Data."

Navigation of Electronic Backups: In this first granted patent, Apple states that their patent is about systems and methods for navigating within snapshots. A user could manipulate a selected snapshot as a hierarchical file structure. For example, the user could navigate a file system to select and open folders in order to find a particular sub-folder or file within a folder. Additionally, navigating to a different level in the snapshot changes the view provided by the other snapshots to reflect views at the same level. 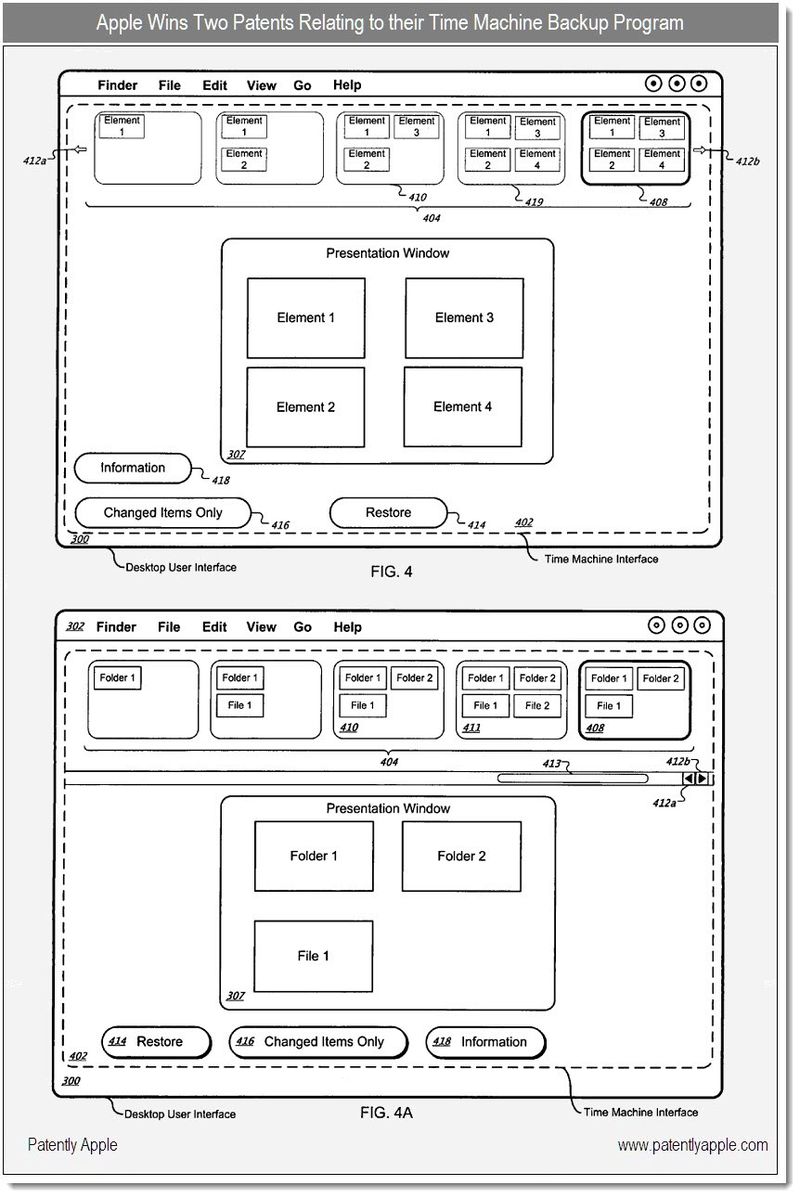 Conflict Resolution in Recovery of Electronic Data: In this second granted patent, Apple states that their patent is about systems and methods relating to a conflict in restoring an interface view including processes and interfaces for resolving conflicts between an element to restore and a currently existing element. Specifically, when a user attempts to restore an element from a snapshot that has a current version as well, a conflict is generated. The user is alerted to the conflict and could choose, for example, to retain the current element, retain the snapshot element, or retain both elements.

Both patents were originally filed in August 2006. Apple received their first granted patents related to Time Machine in October of this year. To find out more about Time Machine, see Apple's How-to Video here.

Apple was granted four patents relating to various aspects of the iTunes Store and/or the iPhone as follows: 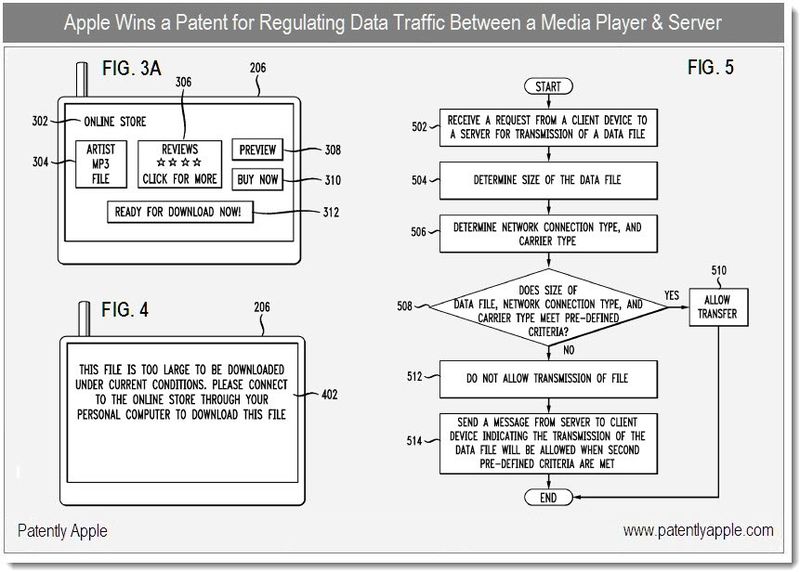 Apple's patent FIG. 3A illustrates a client device displaying a page of an online digital content store, which provides an interface for a user to initiate a purchase of a particular data file. FIG. 4 illustrates a client device displaying a message from the sever, indicating that the requested data file transmission will be allowed when second pre-defined criteria are met; FIG. 5 illustrates an example decision tree, in which a transfer is allowed or disallowed.

The second patent in this group is entitled "Audio Processing for Improved User Experience" and relates to the iPhone's audio and handling of media playback and call conferencing. A third patent is entitled "Graphical User Interface for Browsing, Searching and Presenting Classical Works" which covers the improvements that were made to the iTunes Store GUI in 2004 in relation to reviewing, browsing, previewing and/or purchasing media items. The forth and final patent in this group is entitled "Media Preview User Interface." This patent covers navigation of various menus within Apple's iTunes. The preview of materials could also be used within the context of Apple's Front Row on the Mac or Apple TV.

Additionally, those in the field of video may be interested in another granted patent of Apple's titled "Encoding a Transparency (Alpha) Channel in a Video Bitstream." The patent covers a technique for incorporating an alpha channel in a video codect which is revealed as ITU-T H.264/AVC. The optional channel is part fo the AVC/H.264 Fidelity and Range Extensions ("Frext"). Apple's patent presents a technique for delimiting the alpha channel at the NAL layer. Being that it was originally filed in 2005, the patent is likely already in play. Still, for those in this field, it may be an interesting read.