The iPhone's updated 5 megapixel camera includes a feature called High Dynamic Range or HDR. According to Apple, the iPhone's HDR feature when activated, takes a series of three photos, each with different exposure levels. The iPhone then layers the shots together to create a single sharp photo. In a patent application published earlier this week, we find Apple working on a similar type of feature, except this time around, it's about how the iPhone's camera will deal with blurry photo shots. Other patents disclosed in our report today cover how the iPhone deals with vignetting effects and how it uses a "skin-tone-mask" to avoid over exposed photos. In total, there were ten camera related patents published this week alone which marks the importance that Apple is placing on cameras within the context of the greater iOS device revolution.

In respect to cameras, it was a busy week for Apple. In total, they racked up a whopping ten patent filings related to still photography and video coding. In our main report, we cover Apple's patent that is out to diminish blurry photo shots.

The limitations of Embedded Cameras

Apple's patent covers systems and methods for capturing several images in sequence in response to receiving a user instruction to store a captured image – or take a picture. In particular, this is directed to comparing detected movement data associated with each of the several images in the sequence, and selecting the image associated with suitably low movement data.

In other cases, the lens may require light to be captured for an extended period during which a user could inadvertently move their iPhone (e.g., in low light conditions). This movement in the device could cause the lens to capture images that are not sharp or that are blurry or out of focus.

To ensure that an image is not blurry, the iPhone could continuously buffer images captured by the lens. The buffer could have any suitable length, including for example a buffer large enough to hold 10, 20 or 50 images. In some embodiments, the buffer length may vary based on user inputs. For example, a buffer may have an initial length of 10 images that expands to 20 images in response to receiving a user instruction to store a captured image. As each image is captured by the lens and stored in the buffer, the motion sensing component could provide an output depicting the device movement at the time the image is captured. Thus, each image in the buffer could be associated with motion information describing the movement of the electronic device at the time the image was captured. 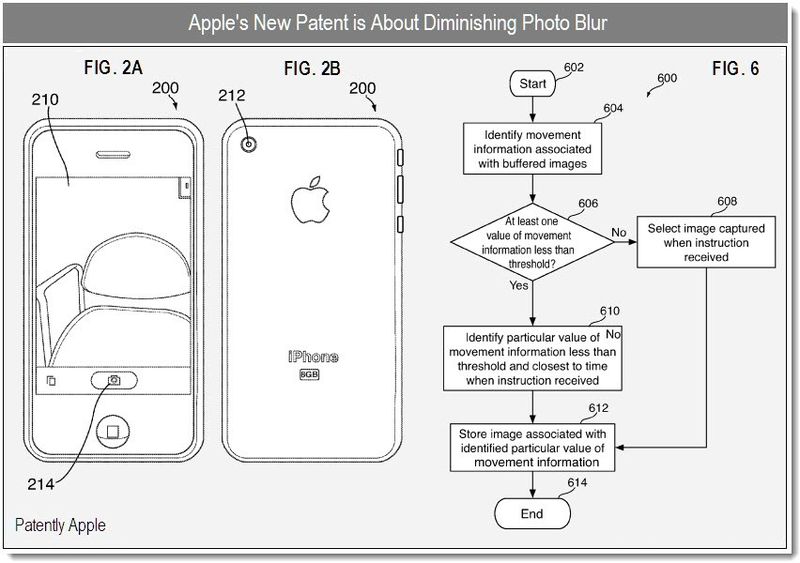 In a second camera related patent, Apple introduces us to the problem of traditional color boosting and their related solution which includes utilizing a "skin tone mask."

One well-known problem with performing a color "boost" operation on a digital image is that it could often have an undesirable affect on areas of the image where skin tones are present. Specifically, skin tones appear to be especially susceptible to boost operations introducing visually unappealing artifacts to the image. For example, certain lighting conditions could give skin tones an over-saturated, unnatural look when boosted. The result is that skin tones appear to have a strong orange, yellow, magenta, or red glow-while the rest of the image appears normally. In a third camera related patent, Apple introduces us to a method and system relating to radially-based Chroma Noise Reduction in the iPhone (or other iOS device with a camera) that involves an edge-preserving blur window.

Apple's patent points us to the phenomenon known as "lens falloff," which concerns the amount of light reaching off-center positions of a sensor. This imaging phenomenon causes the image intensity to decrease radially toward the edges of an image, creating an effect known as "vignetting."

The amount of vignetting present in an image depends upon the geometry of the lens and will vary with various lens properties such as focal length and f-stop. The vignetting effect is more apparent in lenses of lower f-stop (e.g., larger aperture), which are often used in consumer cameras and digital video recorders. Another consequence of the lens falloff effect is that there is often more noise found in pixels farther radially from the center of the sensor or, more precisely, farther radially from the center of the sensors light intensity falloff function, which may or may not be at the geometric center of the sensor.

To correct for this lens falloff phenomenon, a technique known as "flat fielding" could be performed which compensates for the different gains and dark current levels over the surface of the detector.

Apple credits Ralph Brunner, Mark Zimmer and David Hayward as the inventors. For more on this, see patent20100309345, originally filed in Q2 2009.

New Archive Category: Due to this week's barrage of camera patents from Apple, we've decided to add a new Archives category titled "Patents: Camera" for you to check out now or in the future.

Outstanding! As an iPhoneographer, these patents are music to my ears. You go, Apple -- the iPhone rocks.