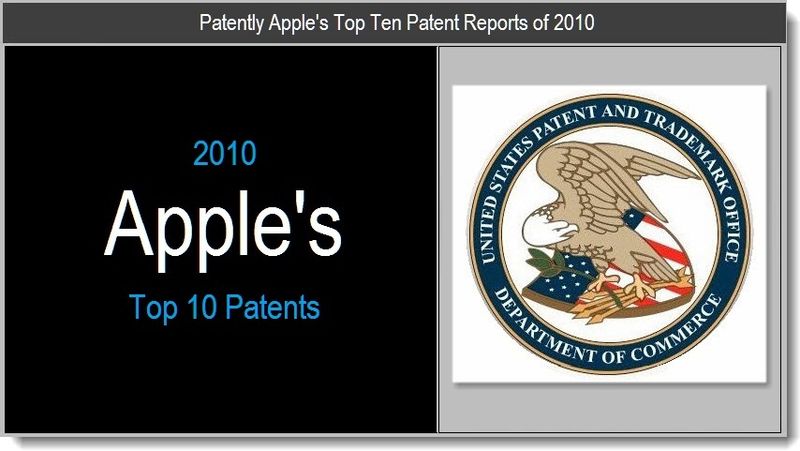 It was another banner year for Apple patents in 2010. The Crazy Ones of Cupertino were shown to be working on an incredible line up of ideas and projects in areas ranging from sports to Near Field Communications to next generation 3D user interfaces and devices and even green technologies. Yet at the end of the day, there were ten patents that rose to the top; Ten patents that the Mac Community clearly chose as their favorites. The Mac Community celebrates Apple's spirit of invention as it empowers and inspires us throughout the year. Will one of your favorites be on this list? Well, let the top-ten countdown for 2010 begin!

Our Methodology for Choosing the Top Ten

Our methodology for choosing the top ten is simple: It comes down to how many of the Mac Community's top writers and thinkers chose to write about one of our reports about Apple's powerful and creative ideas. The more the global community supported one of our reports, the higher the score. Each website equals one referrer and each referrer equals hundreds to thousands of reader views. At the end of the day, consider this system to be the "People's Choice Awards" for patents. Patently Apple would like to take this time to thank the global Mac Community for their support. Millions of people around the world have read about Apple's great inventions because of you. And now, let's get down to what matters.

Apple Introduces us to a New iTunes "Concert Ticket +" System

Apple Introduces us to the Smart Bike

Many Fans have requested to see our next tier of winning Apple patents and we're only too happy to oblige. In our next top tier, we list twelve, as two postions were tied:

Tthe Number One Patent Trend of 2010

In closing out 2010, we'll point you to Apple's leading Patent Trend for 2010: Near Field Communications. This technology, when ready, will lead to new iWallet services and a wide range of other iServices related to travel, social networking, controling more in-home devices, sharing information faster and the beginning of the iKey which is presented in a video in this report.  For more information about this trend, check out our Archives under Tech: NFC.