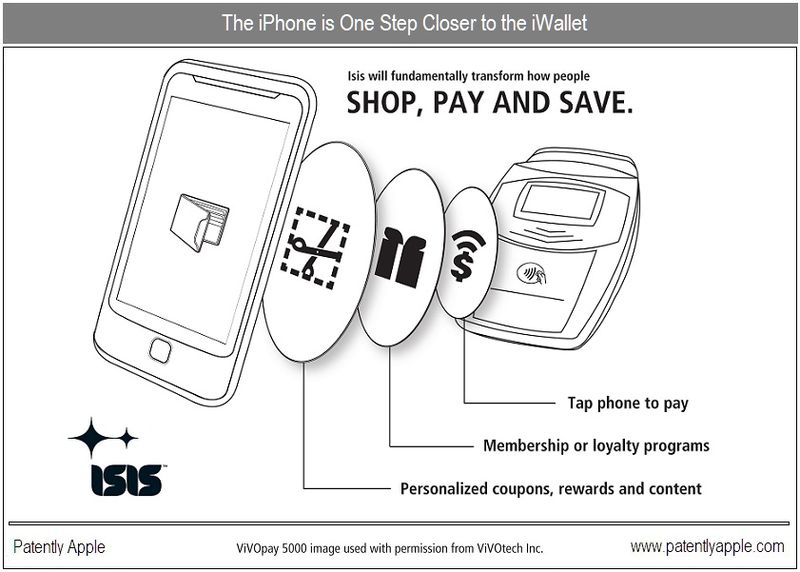 Apple's leading trend in patent based research in 2010 was without a doubt concerning all things related to the use of Near Field Communications or NFC in all of Apple's hardware. The iPhone will no doubt emerge as the most crucial device in Apple's NFC ecosystem because it will serve as your future means of electronic payment. A trend that will allow your future iPhone to act as electronic currency, your credit card, your debit card, your electronic coupon and all the while acting as a means of holding electronic tickets for such things as concerts, air travel, bus or subway. Today, we're one step closer to that reality with the formation of a National Mobile Commerce Network called ISIS, backed by AT&T and Verizon, Apple's current wireless partners. Report Updated.

"Our mobile commerce network, through relationships with merchants, will provide an enhanced, more convenient; more personalized shopping experience for consumers"

Isis' initial focus will be on building a mobile payment network that utilizes mobile phones to make point-of-sale purchases. By utilizing smartphone and near-field communication (NFC) technology to modernize the payments process, Isis intends to deliver new levels of competition and value to consumers and merchants. Isis expects to introduce its service in key geographic markets during the next 18 months.

Michael Abbott has been named as Chief Executive Officer of Isis. Formerly with GE Capital, Abbott is a veteran financial services executive with extensive experience in the payment and technology industries.

"Our mobile commerce network, through relationships with merchants, will provide an enhanced, more convenient, more personalized shopping experience for consumers," said Michael Abbott, Chief Executive Officer of Isis. "While mobile payments will be at the core of our offering, it is only the start. We plan to create a mobile wallet that ultimately eliminates the need for consumers to carry cash, credit and debit cards, reward cards, coupons, tickets and transit passes." Barclaycard US, part of Barclays PLC, is expected to be the first issuer on the network, offering multiple mobile payment products to meet the needs of every customer.

"We believe the venture will have the scope and scale necessary to introduce mobile commerce on a broad basis. In the beginning, we intend to fully utilize Discover's national payment infrastructure as well as Barclaycard's expertise in contactless and mobile payments," said Abbott. "Moving forward, Isis will be available to all interested merchants, banks and mobile carriers."

The new venture will enable contactless mobile payment and commerce services using near-field communication technology. NFC uses short-range, high frequency wireless technology to enable the encrypted exchange of information between devices at a short distance. The new system is being designed and built to include strong security and privacy safeguards.

Patently Apple has followed Apple's hottest trend from the very beginning, even when it wasn't popular. We've compiled an NFC library of patents that you could review at your leisure that covers a full spectrum of applications that Apple envisions being utilized on future iterations of their iPhone and other devices.

Just a few weeks ago we updated our report titled "Apple's iTravel App to Plug into Hotel Servers for In-Room Services" with two new videos illustrating how hotels are working to ensure that devices like the iPhone will be able to become your hotel key to expedite check-in and check-out fluidity and convenience.

With the formation of ISIS, we could now begin to see that the time frame of introduction of iWallet capabilities into a future iPhone could likely coincide with next generation iPhones based on 3GPP Long Term Evolution or LTE. The latest standards were announced in Europe in October and are expected to roll out in varying degrees over the next 12-36 months. The data traffic required to carry billions of new transactions per year will require such an updated network. Apple will definitely emerge as a major iWallet player in the coming years ahead – and we're likely to see Apple slowly introduce NFC capabilities into iOS and OS X Lion updates in 2011.

Update: BusinessWire put out an Isis Press Release on April 06, 2011:  Isis has entered into an agreement with Utah Transit to make their entire transit system Isis-enabled. It marks the first commercially viable mobile system in the US with such a system. The press release describes how the iWallet using NFC technology is on its way by next summer. If you've read our many reports on this subject as noted in this report, then all of what is about to happen in Salt Lake was presented to the community far in advance. The power of reading Apple patents to educate and keep us ahead of the technology curve is what it's all about. The news of the press release came via Engadget.

Side Note: Three Apple Patent Reports Specifically About Banking: One, Two, Three. Another interesting read today on the subject of NFC is one from Jonny Evans of 9 to 5 Mac, titled "Does iWallet iPhone mean Apple versus PayPal?" It's also been a topic of interest for Cult of Mac's Leander Kayney.