Apple Working on an Interactive Laser Tagging Game or Framework 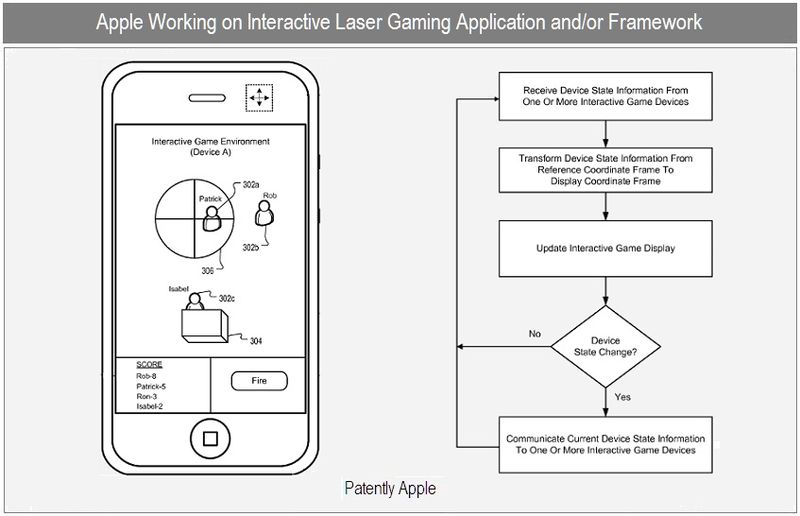 Apple's Game Center was introduced in September in conjunction with their revised iPod touch. In one of today's newly published patent applications, we see that Apple is getting very serious about interactive multiplayer games. In fact, Apple's entire patent discusses the makeup of a cool multiplayer laser tagging game and its related geopositioning technologies. The game uses virtual lasers and could allow for future gaming headsets so that you and your friends could coordinate that killer ambush. Sounds like fun to me.

Modern mobile devices integrate a variety of communication technologies with geopositioning technology and sensors. The communication technologies (e.g., cellular, Wi-Fi, Bluetooth) allow users to communicate with other users in a variety of operating environments. Geopositioning technologies allow users to receive detailed digital maps and location-based services. Various sensors integrated in the mobile device receive input from the operating environment and provide output for a variety of interesting and useful applications running on the mobile device. For example, an accelerometer could detect when a device is held in portrait or landscape orientation, and then adjust a user interface based on the detected orientation. Sensors, such as the accelerometer in Apple Inc.'s iPhone have also been used in games. The user manipulates the iPhone in response to game action, such as trying to guide a virtual ball through a virtual maze or steer a virtual car or boat through a virtual racetrack. 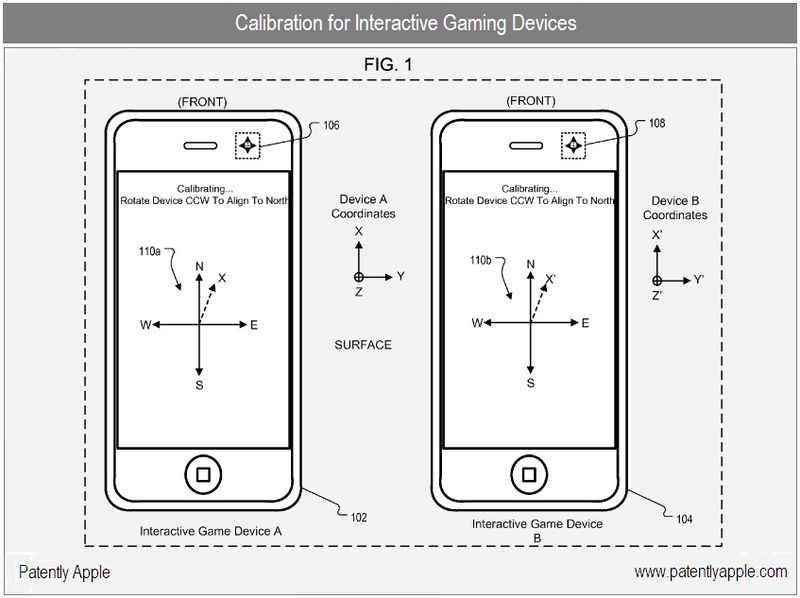 The game devices noted as iPhones 102 and 104 above could include a variety of integrated sensors or could be coupled to sensors through one or more ports of the game device (e.g., USB port). Some example sensors include but are not limited to: accelerometers, gyros, geopositioning technology (e.g., GPS, cell tower triangulation, Wi-Fi), a magnetic compass and any other technology that can be used to determine position and/orientation of a game device. 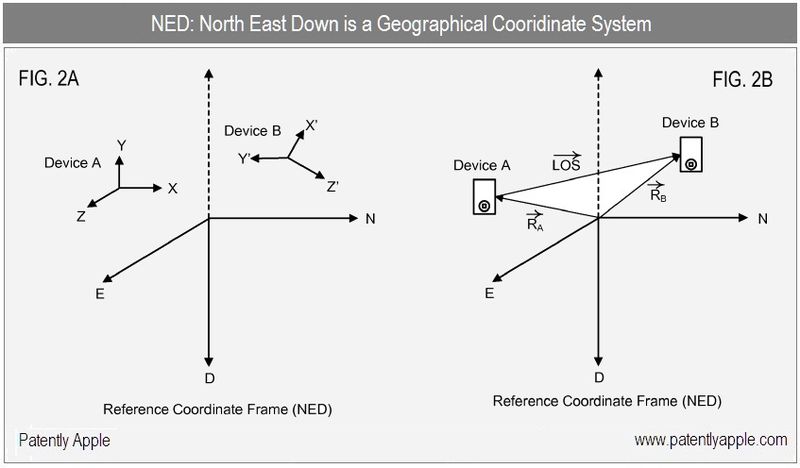 Each interactive game device has a position vector in the NED coordinate frame that changes as the player moves their device in the real world, interactive game environment. Each device knows its position vector by being location aware. For example, each device can include a GPS receiver, which provides a current geographic location of the device. 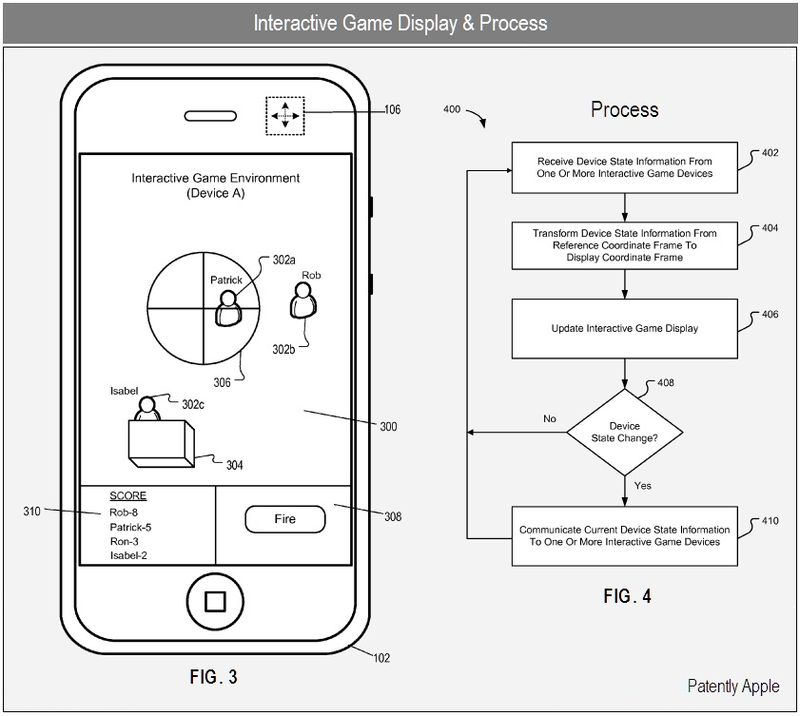 For a Laser Tag game (the result of the methods described above) are that as players point the devices at each other in the real world and "tag" each other. The mathematics described in the patent will determine whether a player has been tagged without the device actually projecting a laser beam or other light source in the real world. If an interactive game display is used, player icons will appear and disappear from the respective displays of each device, as the game devices move about the real world environment. That is, the locations of the player icons on the respective displays will change position in the displays based on the relative locations of the game devices in the real world.

In the example shown, the interactive game display of Device A is shown (see FIG 3). There are three other players (three other game devices) in the example Laser Tag game. In Laser Tag, players try to "tag" other players to score points. The four players in this example game are Ron, Patrick, Rob and Isabel. Interactive game applications running on each device could allow each player to select a name or character for their player icon. The display could include an overlay of a cross-hair (patent point 306), which could be manipulated by the players to target and tag other players. For example, the player Patrick (player icon 302a) is currently being targeted by Ron, which is illustrated by the player icon 302a for Patrick being aligned with the cross-hair. In some implementations, the game display includes a portion 308 for firing a virtual laser and a portion 310 for displaying scores or other game information. Other user interfaces are also possible based on the needs of the game.

Apple's patent FIG. 4 shown above is an example process performed by an interactive game device.

As in any good war game, you'd want and need to communicate with your team members. The system provides for an audio subsystem that could be coupled to a speaker and a microphone to facilitate voice-enabled functions, such as voice recognition, voice replication, digital recording, and telephony functions. I'm sure that specialty headsets will be made available from the gaming company or from third party developers. Some games today like the upcoming Call of Duty: Black Ops could work with headsets to coordinate game play in multiplayer mode. I doubt if they have to be as complicated as those I've linked to for Apple's laser tagging game, but you get the idea.