On November 11, 2010, the US Patent & Trademark Office published a patent application from Apple that reveals one of the next chapters for Apple's audio headsets. More specifically, Apple is contemplating the delivery of two new headset designs that would incorporate triple-microphones in the hopes of providing users with a vastly superior noise cancellation solution. One of the new headsets being considered would include a microphone boom – which many users have been hoping for. As Apple's iPhone and iPad 3G products keep on winning new marketshare quarter in and quarter out, every new technology that Apple could bring to the table to improve on quality and innovation is one more headache for Apple's competitors.

Mobile smart phones are increasingly being used in situations that call for hands-free communication. As a result, mobile phone users are now using headsets with cables that could be plugged into a headphone jack of a mobile phone. Typical headset designs have a single microphone that is located as near the user's mouth as possible, when the headset is worn, e.g. at the tip of a microphone boom or attached to one of the cables that connect to an earphone of the headset. This positioning however is generally not as good as being very close the user's mouth, often causing a decrease in the signal to noise ratio (SNR) of the speech signal that has been captured or picked up by the microphone. Coupled with the fact that most users often have conversations using their mobile phones in noisy environments, the fidelity of the captured speech signal is often very poor.

One way to improve the performance of sound capture by the headset during a two-way communications or phone call application is to capture the near end user's speech using multiple microphones. This arrangement is also referred to as a microphone array. The processing of microphone array signals improves the SNR of the resulting microphone signal, by spatially filtering the ambient sound field around the near end user. In other words, the array is "pointed" toward the signal of interest, by emphasizing contributions from the better placed microphones while deemphasizing those of the poorly placed microphones. Microphone array processing may also be used in conjunction with a noise cancellation algorithm to more effectively reduce the ambient noise that is captured by the microphones.

Headsets with built-in microphone arrays may also perform better when being used for media playback applications, e.g. while the user is listening to a locally playing MP3 music file, or streaming video over the Internet. In that case, microphone array processing may enhance the noise cancellation algorithm to alleviate the impact of acoustic leakage of ambient noise into an earphone of the headset.

Noise Cancellation on an iPhone 4 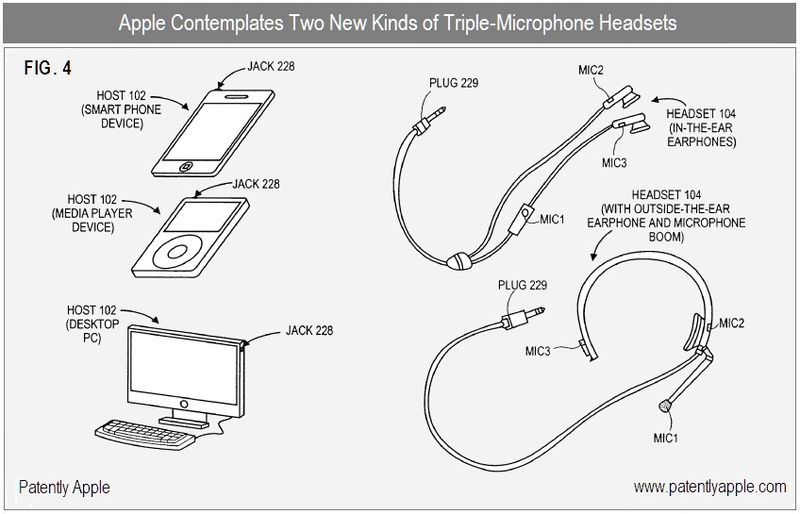 As noted above, we see that Apple is contemplating a triple-mic solution on two different headset designs. The first design is an "In-the-Ear" style headset which is almost identical to Apple's current Earphones with Remote and Mic that you could buy from the Apple Store but adds two additional microphones that could be seen on either earplug. The second design is an "Outside-of-the-Ear" style headset with a microphone boom – a style which many prefer for conferencing or for in-vehicle communications.

The current variations on the microphone signal line are then detected at the host side as voltage variations, using a demultiplexer whose input is connected to the microphone signal line and whose outputs deliver samples of the microphone signals, respectively. To do so, the demultiplexer may switch its input, from being connected with one of its outputs to another one of its outputs, in accordance with the same reference frequency that was used by the multiplexer in the headset side. The analog outputs of the demultiplexer are then digitized and fed to an audio processor. The latter may perform microphone array processing upon the digitized microphone signals. Depending on the application running in the host device, the audio processor may produce for example an uplink signal that is then fed to a communications network interface of the host device (e.g., a telephony application), or an audio signal that represents playback of a digital media file (e.g., a local MP3 player application or an Internet streaming video player). 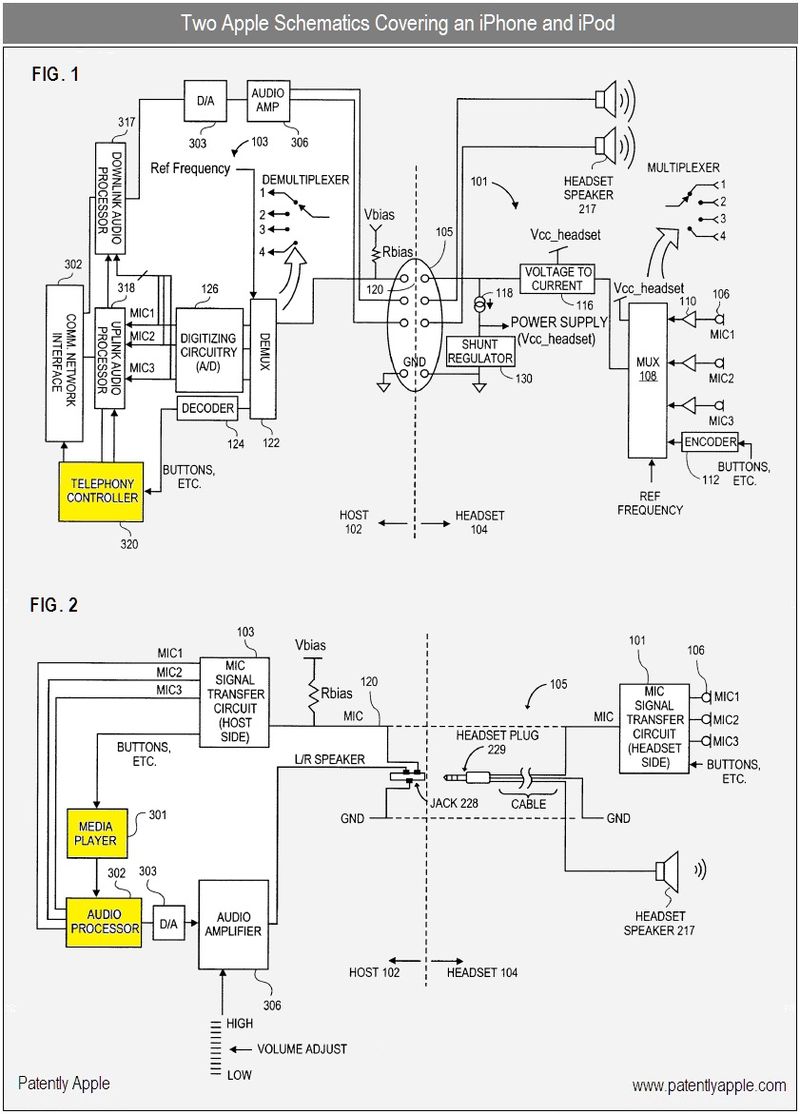 If you're interesting in understanding the process that goes into creating the iPod's physical interface window, then you might be interested in reviewing patent 20100282405 titled "Media Player with Machined Window Undercut and Transparent Wall Therein."

If you're interested in understanding the thinking behind Apple's physical remote, then you may be interesting in reviewing patent 20100283624 titled "Remote Control Signal Learning and Processing by a Host Device and Accessory."

For additional information on any of today's patents, simply feed the individual patent number into this search engine.