Damages in Mirror Worlds vs. Apple Case Could Top 1.8 Billion 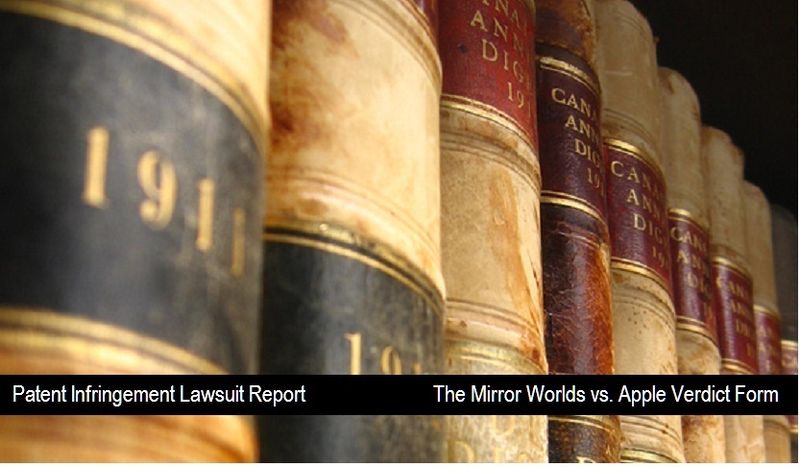 On October 5, 2010, Patently Apple briefly covered the Mirror Worlds vs. Apple patent infringement verdict by simply presenting the patents that were involved in this case. We had stated at the time that "closely held Mirror Worlds, founded by Yale University computer-science Professor David Gelernter, sued Apple in 2008, claiming that Apple's iPod music device, iPhone and Mac computers infringed its patents for a way that documents are displayed on a computer screen. Mirror Worlds has won their case against Apple who is now appealing." But a Patent Attorney is now telling us that the damages in the case could actually climb to a whopping 1.8 billion. This brief report presents you with a copy of the Jury's Verdict Form along with a legal perspective on the verdict.  Update April 5, 2011: A News report from Bloomberg confirms that Apple has won on appeal.

The Verdict Form and Perspective

Matthew Macari, from the Intellectual Property Law firm Skaar Ulbrich Macari has informed Patently Apple that the "jury also found willful infringement. As you might know, that can result in treble damages. The court will make that decision based on additional briefing." Below is a copy of the Verdict form. 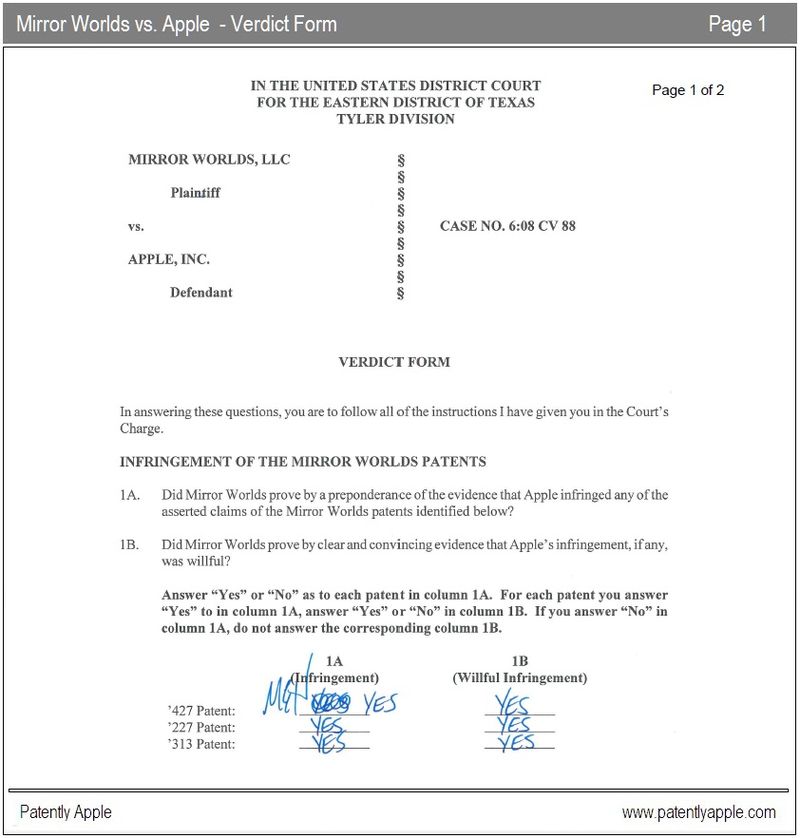 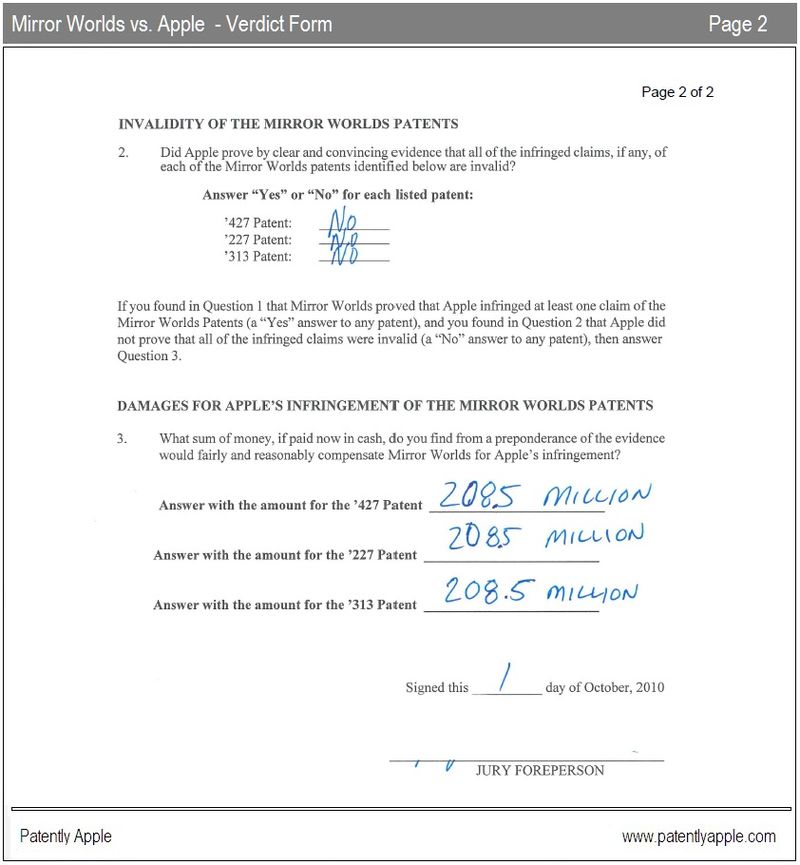 Another issue, according to Macari, "is whether the judge will reduce the total damage award from the jury." Other sources have discussed this briefly, but "it is a little unusual to award the same damage amount for 3 separate patents if the patents are all directed to essentially the same invention."

However, Macari adds that "the jury here has awarded $208M+ for each patent – and the argument from Apple is that Mirror Worlds is triple dipping on essentially the same invention in each patent. So the real issue may be whether Apple will owe $208M or $1.8B - e.g., the judge could reduce it to $208M if it agrees with Apple that the 3 patents do not warrant 3 separate $208M damage awards, or the judge could stick with the present verdict amount and even triple the damages based on the jury's determination that the infringement was willful. Those two damages scenarios are divergent and would likely be viewed very differently by Apple."

And while "trebling damages is not the norm" states Macari, it "can occur after a finding of willful infringement" - which is very much the case as noted by the verdict form. Yet other considerations could come into play. According to Macari, "The conduct of Apple, Apple's good faith belief that the patents were invalid or not infringed, and other key factors are considered by the judge in determining whether to increase the damage amount." Macari repeats that "substantial increases in the damage amount are not the norm, but can happen."

So while the general thinking in the press was that the verdict maxed out at 625 million, the fact is that the math could actually triple to well over 1.8 Billion, according to Patent Attorney Matthew Macari.

Update, 1:30 PM Mountain Time: One of the key findings in this case was in respect to willful infringement. So how was "Willful Infringement" defined in this case? Well, below you'll find limited but specific segments of the jury instructions that defined "Willful Infringement" and "Damages" in this case so that you could see what the jury had to work with. It should be noted that both parties work with the court in crafting these instructions. The following limited segments are directly from court documents.

Willful Infringement Defined in this Case

The issue of willful infringement relates to the amount of damages Mirror Worlds is entitled to recover in this lawsuit. If you decide that Apple willfully infringed one or more claims of the Mirror Worlds patents then it is my job to decide whether or not to award the increased damages. You should not take this factor into account in assessing damages, if any, to be awarded to Mirror Worlds.

When considering the Apple's conduct, you must decide whether Mirror Worlds has proven it is highly probable that the Apple's conduct was reckless; that is, that Apple proceeded with the allegedly infinging conduct with knowledge of the patent, and in the face of an objectively high likelihood that it was infringing the claims of a valid and enforceable patent. Because this is an objective issue, the state of mind of Apple is not relevant. Legitimate or credible defenses to infringement, even if ultimately not successful, demonstrate a lack of recklessness.

If you conclude that Mirror Worlds has proven that the Apple's conduct was reckless, then you need to consider the second part of the test. You must determine whether Mirror Worlds proved it is highly probable that the unjustifiably high risk of infringement was known or so obvious that it should have been known to Apple. In deciding whether Apple satisfied the state-of-mind part of the test, you should consider all facts surrounding the alleged infringement including, but not limited to, the following:

1. Whether Apple acted in a manner consistent with the standards of commerce for its industry;

2. whether Apple intentionally copied, without a reasonable basis, a product or method of Mirror Worlds covered by one or more claims of the patent, as distinguished from trying to "design around" the patent by designing a product or method that Apple believed did not infringe those claims; and

On Damages as Defined in this Case

7.1 Damages - Generally: I will now instruct you on damages. If you find that Apple has infringed one or more valid claims of the Mirror Worlds patents, you must determine the amount of money damages to which Mirror Worlds is entitled. Each of these determinations must be determined separately and individually as you did when you considered whether the patents were infringed or invalid. By intsructing you on damages, I do not suggest that one or the other party should prevail on the issues of infringement or invalidity. These instructions are provided to guide you on the calculation of damages in the event you find infringement of a valid patent claim and, thus, must address the damages issue.

The amount of damages must be adequate to compensate Mirror Worlds for the infringement; but, in no event may the damages award be less than a reasonable royalty. At the same time, your damages determination must not include additional sums to punish either Apple or to set an example. You may award compensatory damages only for the loss that Mirror World proves was more likely than not caused by the Apple's infringement.

7.3 Damages - When Damages Begin: The amount of damages Mirror Worlds can recover is limited to those acts of infringement that occurred after Mirror Worlds gave Apple notice that it infringed the patent. Notice of infringement can be actual or constructive, and I will explain in a moment what that means.

Actual notice means that Mirror Worlds communicated to Apple a specific charge of infringement of the patent by the accused products. This notice is effective as of the date given. The filing of a complaint or infringement counterclaim qualifies as actual notice. Mirror Worlds filed a complaint against Apple on March 14, 2008 and bears the burden of establishing it is more than not that it notified Apple of the alleged infringement on an earlier date.

For the record, it should be noted that the identity of the Jury Foreperson was removed in the originating document by the court or court system for security reasons and not tampered with by Patently Apple.

We provided a hyperlink to the update in our opening paragraph. Matthew Macari who participated in the original report now adds the following: "Granting Apple's motion to overturn the jury's verdict is definitely the exception in federal court practice, not the rule.  Judge's are reluctant to overturn a jury verdict in these cases."