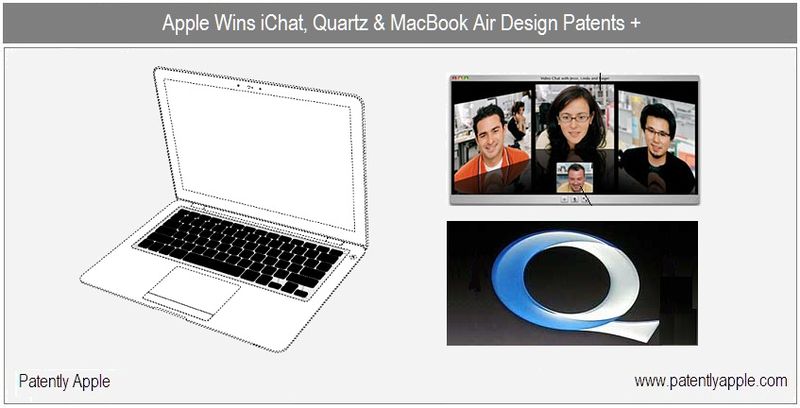 On the eve of Apple introducing an all new MacBook Air design at a special "Back to the Mac" event tomorrow, Apple has been granted two design patents for their current design. The notables within the remaining seven granted patents that were issued today include a huge win for Apple's iChat video conferencing architecture as well as a win for their Quartz Extreme compositor.

On the eve of Apple unveiling their all new 2010 MacBook Air at a special "Back to the Mac" event, they've been granted a design patent for their current model. 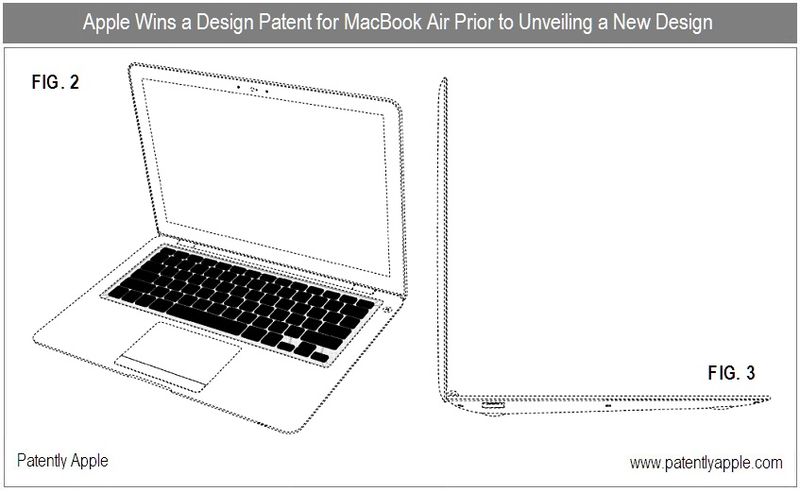 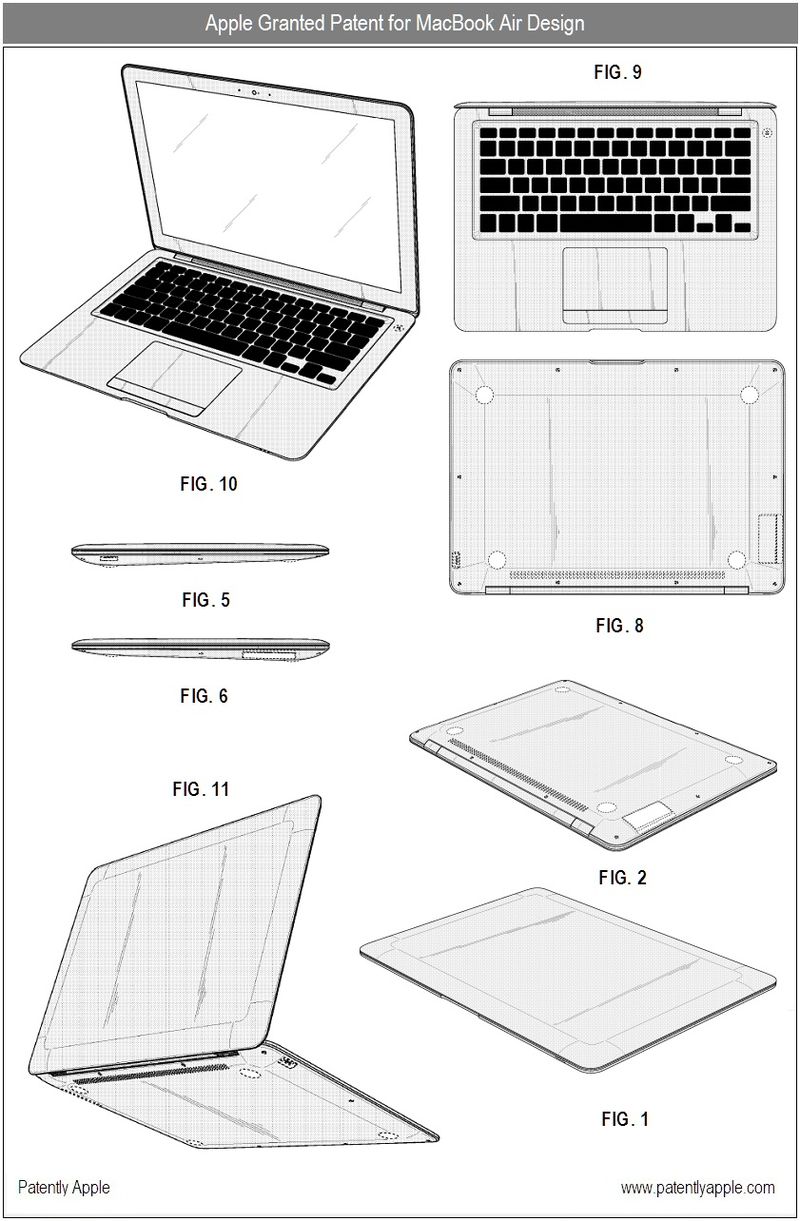 Apple has also been granted a design patent for their iPhone compass icon under D625,733 with Freddy Anzures noted as the sole inventor.

Apple's invention relates generally to the presentation of stereo image information on a display for computer systems and, more particularly, to an OS X system level windowing system having the capability to render stereo content. In OS X that illustrative stereo display system is embodied within the Quartz compositor.

When you move, resize, or scroll a window in Mac OS X, you're witnessing the power of Quartz Extreme. Harnessing the performance of the graphics processor in your Mac, Quartz Extreme delivers responsive, accelerated window compositing with full support for transparency. Every time a window moves, scrolls, or resizes, Quartz Extreme efficiently directs the GPU to update the display. The GPU focuses on what it does best — graphics — and frees the CPU for other tasks. 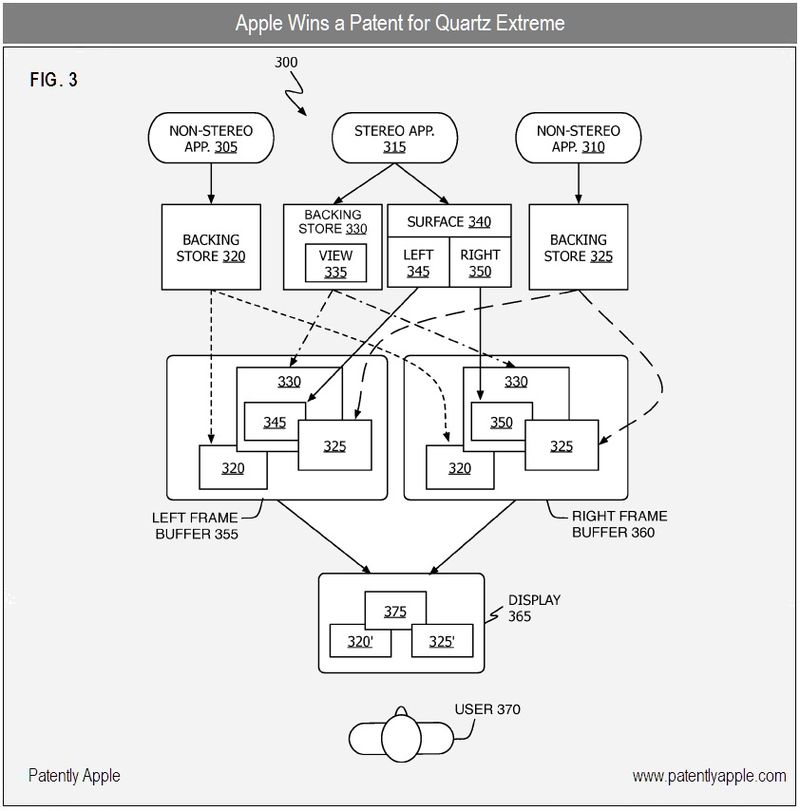 The Quartz compositor provides windowing system services that applications use to generate windowed displays. As presented in this patent, a compositor is a window system component that blends (also referred to as alpha-blends) the contents of various application backing stores to the display, mixing the contents of each window depending upon its opacity. In general, a compositor may be implemented entirely in software or it may be implemented as a combination of software and hardware. Apple's patent FIG. 3 noted above is presenting a stereo display system.

Apple has been granted a patent for iChat which is an instant messaging software application exclusively for its Mac OS X operating system. It has audio, video and screen-sharing capabilities as well as text messaging. It uses a XMPP-like protocol, Bonjour for user discovery, and it also allows for LAN communication. Apple introduced iChat in the summer of 2002. 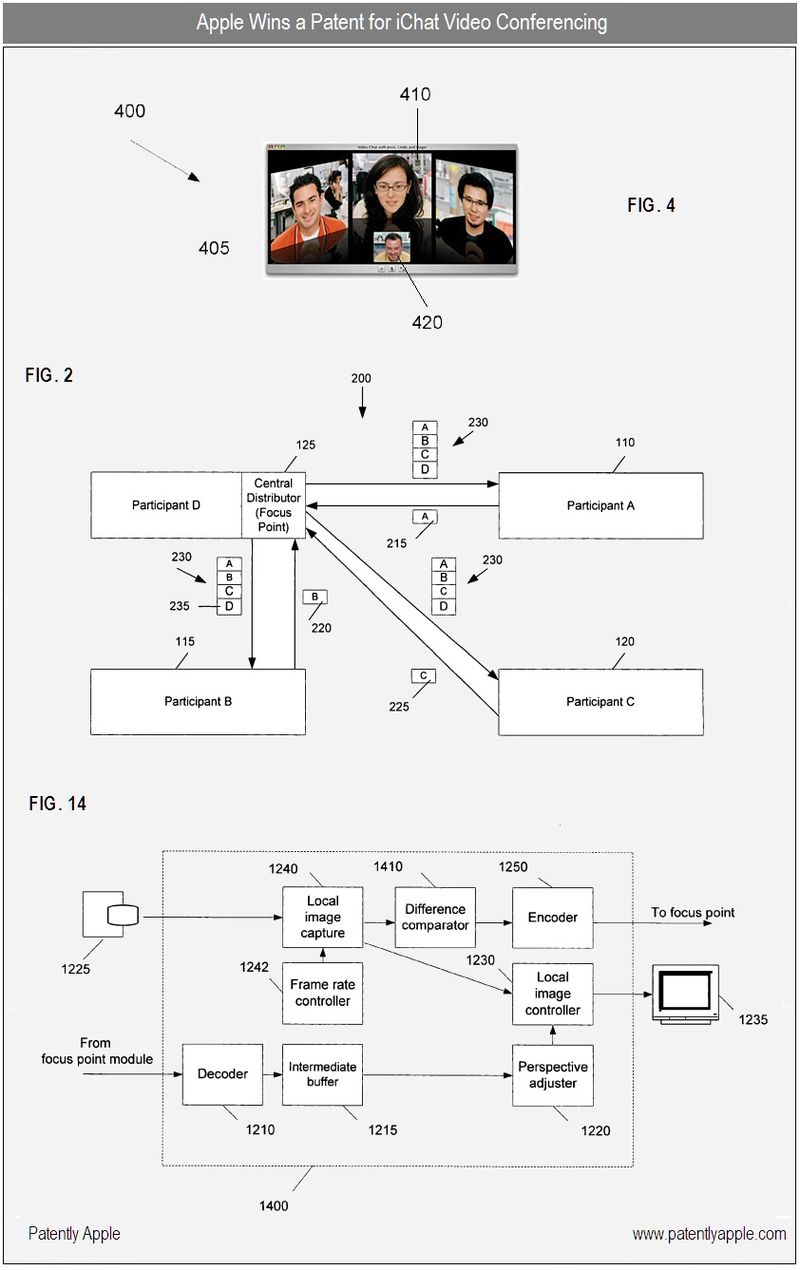 Apple's patent FIG. 2 illustrates how some embodiments exchange video content in a multi-participant video conference. FIG. 4 shows an exemplary arrangement of participants' images on one of the participants' display. Patent FIG. 14 illustrates a non-focus point module which performs encoding and decoding operations.

During the video conference, a camera attached to the non-focus computer films the video-conference participant who is using the non-focus point computer. During the encoding operation, the local image capture module receives and captures video frames that are produced by the camera. At a particular sampling rate that is specified by the frame rate controller, the local image capture module directs the captured frames to the encoder, which then encodes and transmits the frames to focus-point computer.

Apple's granted patent generally relates to graphically-oriented computer operating systems and more particularly to a method and system for processing events in general and human interface device events in particular. 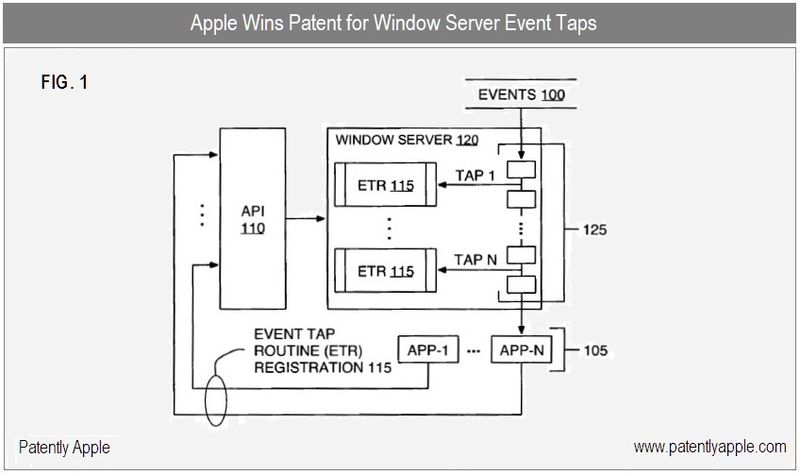 Event tap routines, are separate from and not necessarily associated with the application to which the event is targeted. Illustrative applications include, but are not limited to, user-level applications such as audio, video and multimedia applications--each of which may present one or more windows to the user. Illustrative human interface devices include, but are not limited to, pointer devices (e.g., a mouse, trackpad, trackball and joystick), keyboards, control devices (e.g., a front panel knob, switch or button or a game's data glove, throttle or steering wheel) and display devices. As used herein, events are user actions initiated through one or more human interface devices.

GP - 7,816,811 - Portable Power Source to Provide Power to an Electronic Device via an Interface