Apple Patent: iPhone Display May Double as an RFID Transponder 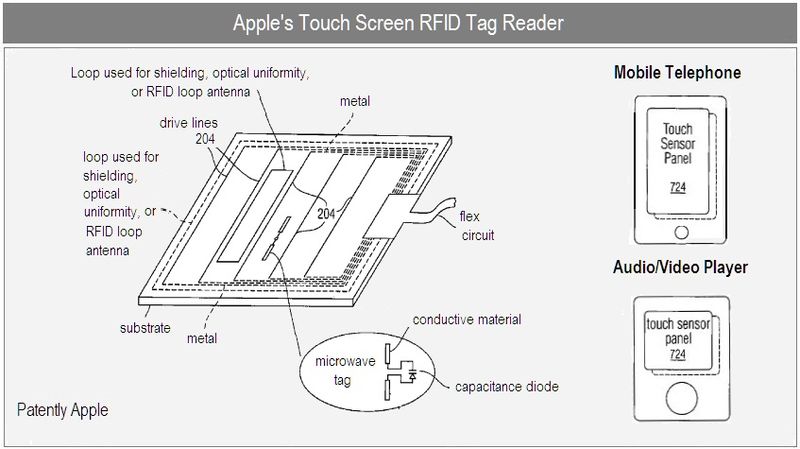 Patently Apple first noted Apple's NFC patent trend back in late 2009. Then the patent downpour arrived in April and May of 2010 which covered everything from embedding NFC/RFID technology into home appliances and devices right on through to the iWallet. But a European patent filing of Apple's that was published late last week provided us with a little background. It appears that Apple's work on bringing this technology to the iPhone and iPod touch actually began right after the iPhone debuted in 2007. Today's report covers this patent which discusses using a cellphone (iPhone) and Audio/Video Player (iPod touch) as both an RFID tag reader and a tag. At the heart of this patent, Apple states that "the RFID antenna could be placed in the touch sensor panel, such that the touch sensor panel could now additionally function as an RFID transponder." This is the technology that could be at the heart of Apple's future iWallet and iKey.

In one embodiment, loops (single or multiple) forming the loop antenna of the RFID circuit (for either reader or tag applications) could be formed from metal on the same layer as metal traces formed in the borders of a substrate. The metal traces are used for routing sense or drive lines of the touch sensor panel to one edge of the substrate so that they could be connected to a flex circuit. Forming loops from metal on the same layer as the metal traces could be advantageous in that the loops could be formed during the same processing step as the metal traces, without requiring a separate metal layer. Conductive material other than metal could be used as well.

In other embodiments, conductors formed in the shape of loops and normally provided for other functions could be multiplexed to serve as the loop antenna when the handheld device is in an RFID mode. For example, a loop around the perimeter of a touch sensor panel layer, used primarily for optical uniformity or shielding, could be held at a particular potential or ground during normal use, and multiplexed to transmit or receive AC coupled signals when the RFID circuit is to be used.

Apple's patent FIG 1 shown below illustrates an exemplary conventional RFID system, which could include an RFID reader and an RFID tag. 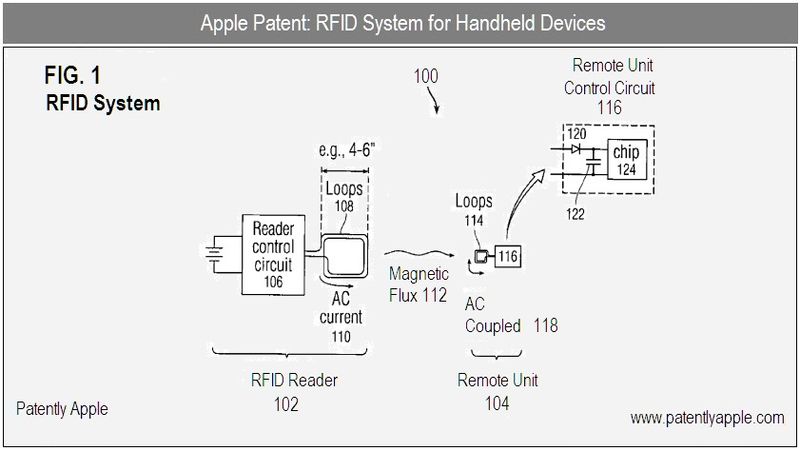 Used as an RFID Reader 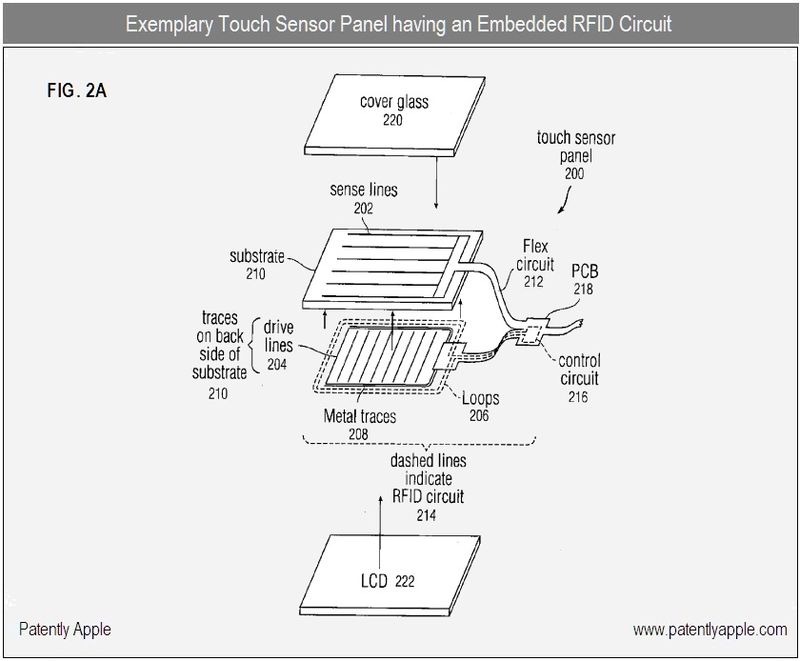 Used as an RFID Tag

In another embodiment, the handheld device could act as an RFID tag configured to provide information to an RFID reader. This embodiment could include a badge reader function, where a user could simply swipe the handheld device close to an RFID reader to gain access to a building, room, file cabinet, desk drawer, computer, workstation, copy machine, facsimile machine, and the like.

In another embodiment, the handheld device can be a remote unit configured to be used as a credit, debit or gift card, so that the device can be used to pay for items, services, train or subway fares, etc. at gates, vending machines, and the like.

Used as Both a Reader and Tag

Apple's patent FIG. 2b illustrates several exemplary loops formed on the same side of a substrate as the drive lines that can serve as RFID loops. 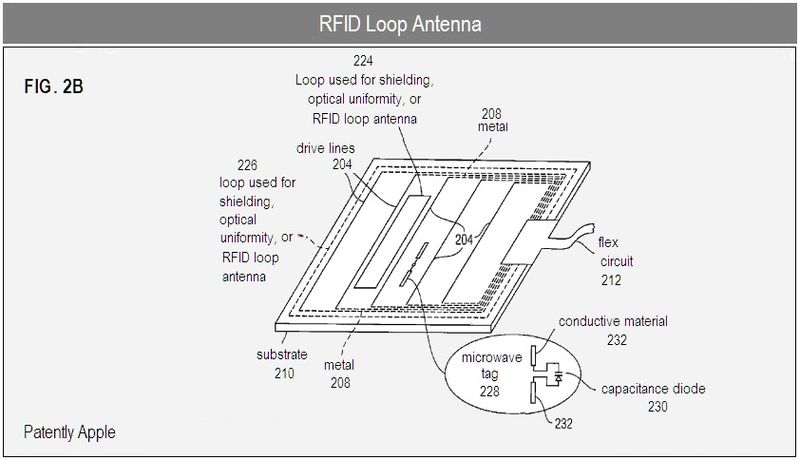 Apple's patent FIG. 3 shown below is a flow diagram illustrating an exemplary time multiplexing of the touch sensor panel and RFID circuit. 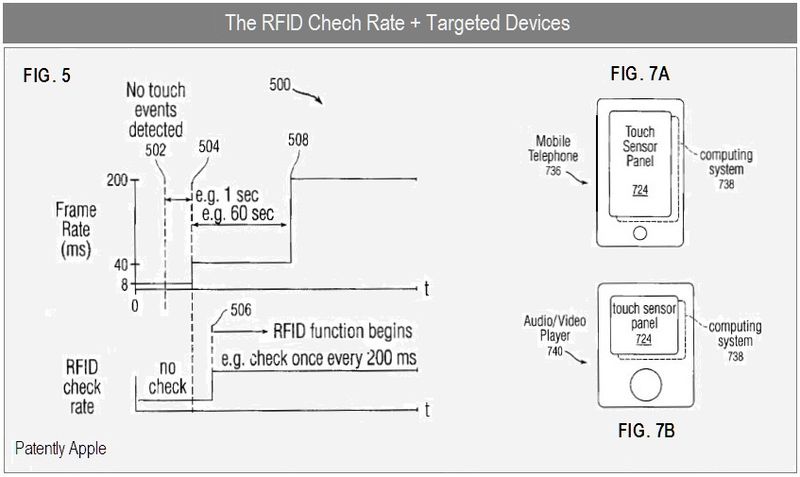 Apple's patent FIG. 5 shown above is a plot of frame rate versus time, illustrating an exemplary change in the frame rate of a panel scan over time and how the RFID function can become operational at the proper time. Apple's patent Figures 7a and 7b simply illustrate that Apple's proposed RFID reader is aimed to debut on devices like the iPhone and iPod touch.

Apple credits Michael Rosenblatt and Steven Hotelling as the inventors of the patent application entitled "Touch Screen RFID Tag Reader." The European patent EP 2232627 which was published on September 29, 2010, shows us that the priority US patent was originally filed in 2007. For those wishing to review the deeper technical points of the patent could review the European patent equivalent under WO 2009085777 which was published in 2009.

Apple's patent notes that it incorporates the content of a book entitled "RFID Handbook: Fundamentals and Applications in Contactless Smart Cards and Identification" by Klaus Finkenzoeller, John Wiley & Sons, Ltd., 2003."