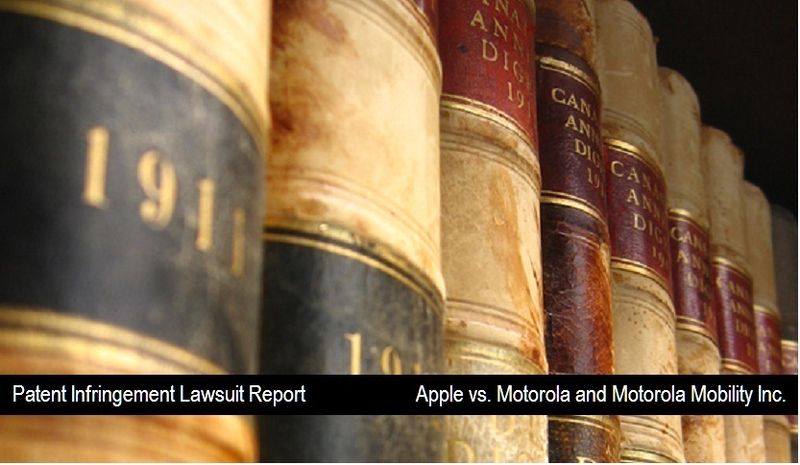 The inevitable: When Motorola preemptively launched their declaration judgment action against Apple earlier this month, we knew that Apple was likely to launch multiple patent infringement lawsuits against Motorola once their licensing negotiations failed to produce an agreement. Late yesterday, Apple filed a pair of patent infringement lawsuits against Motorola Inc. and Motorola Mobility Inc. in the Wisconsin Western District Court. The combined lawsuits cover six patents – none of which were covered by Motorola Mobility Inc.'s filed lawsuits. The main focus of these lawsuits centers in on the most important technology of all pertaining to the next generation smartphones: Multi-Touch. In 2009, Apple's COO Tim Cook warned the competition during a financial conference, as follows: "we like competition as long as they don't rip off our IP. And if they do, we will go after anyone who does." Obviously Apple now thinks that Motorola has crossed that line.

According to court documents, Apple states that the Accused Products are mobile devices, such as smartphones, and associated software, including operating systems, user interfaces, and other application software designed for use on, and loaded onto, such devices.

Upon information and belief, these products are manufactured, marketed and/or sold by Motorola in the United States. At least the following mobile devices infringe one or more claims of one or more of the Asserted Patents: Droid, Droid 2, Droid X, Cliq, Cliq XT, BackFlip, Devour A555, Devour i1, and Charm.1

An Overview of All the Patents listed in the Two Lawsuits

Five: Apple Computer, Inc. patent titled: Method and Apparatus for Displaying and Accessing Control and Status Information in a Computer System: Apple's invention generally relates to the field of computer systems; particularly, the present invention relates to displaying a status and control function bar or window to enable access of user selected indicia to a computer system user.

Apple is seeking the following from the court:

A judgment permanently enjoining Motorola and its officers, directors, agents, servants, employees, affiliates, attorneys, and all others acting in privity or in concert with them, and their parents, subsidiaries, divisions, successors and assigns, from further acts of infringement, contributory infringement, or inducement of infringement of the Asserted Patents;

A judgment that Motorola's various acts of infringement have been willful and deliberate, and therefore, that Apple is entitled to up to treble damages as provided by 35 U.S.C. § 284;

A judgment that Motorola's willful infringement renders this an exceptional case entitling Apple to an award of its attorneys' fees and costs incurred in prosecuting this action, together with interest, pursuant to 35 U.S.C. § 285; and such other relief as the Court may deem just and equitable. 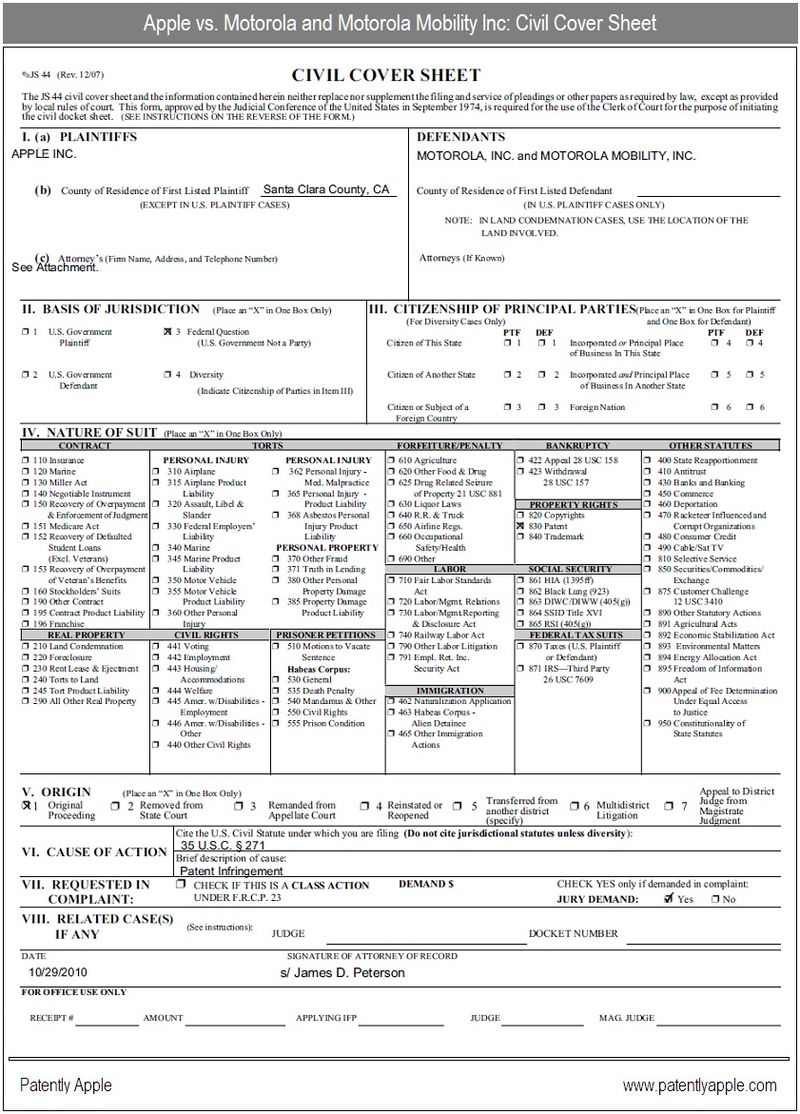 The noted Civil Cover Sheet above pertains to one of two cases as does the Summons noted below. 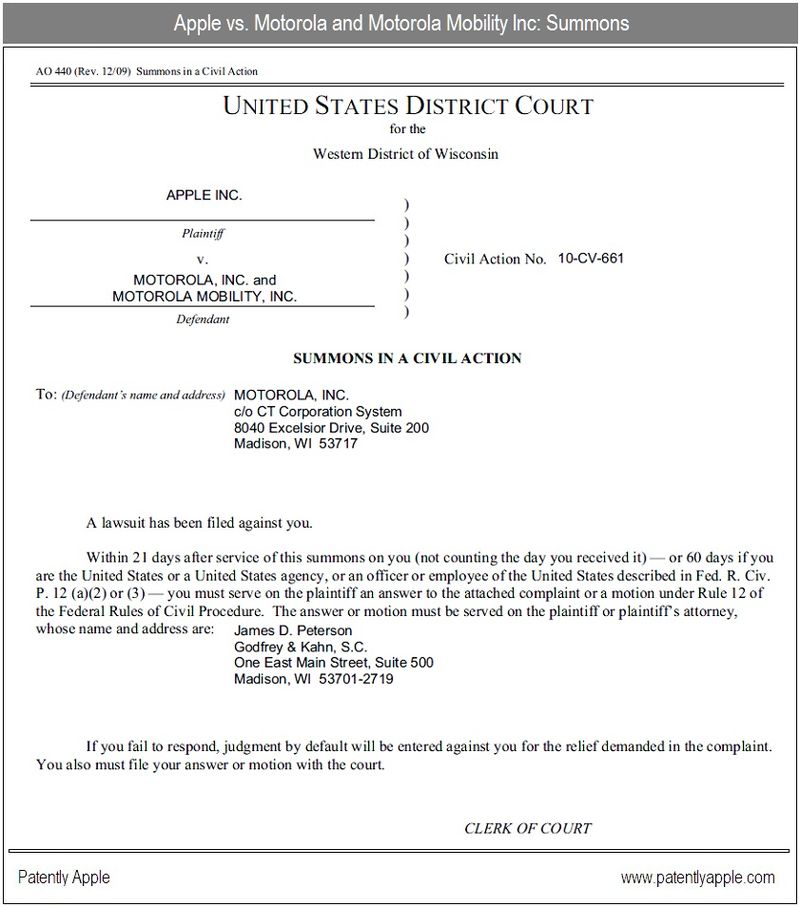 GODFREY & KAHN, S.C. filed the complaint with the court on behalf of Apple, Inc. on October 29, 2010. WEIL, GOTSHAL & MANGES LLP is acting counsel. Apple seeks a trial by jury. The presiding Judge in this case is Stephen L. Crocker. See our Legal Archives for related cases.

Update Oct. 31, 2010: For the sake of little fun, here's a graph illustrating a basic overview or perhaps better yet, a snapshot in time, of who's suing who in the mobile space. Of course you'd have to add a new arrow from Apple to Motorola in order to complete the graph as of this date. The graphic was a part of an October 5, 2010 report from The Gaurdian. 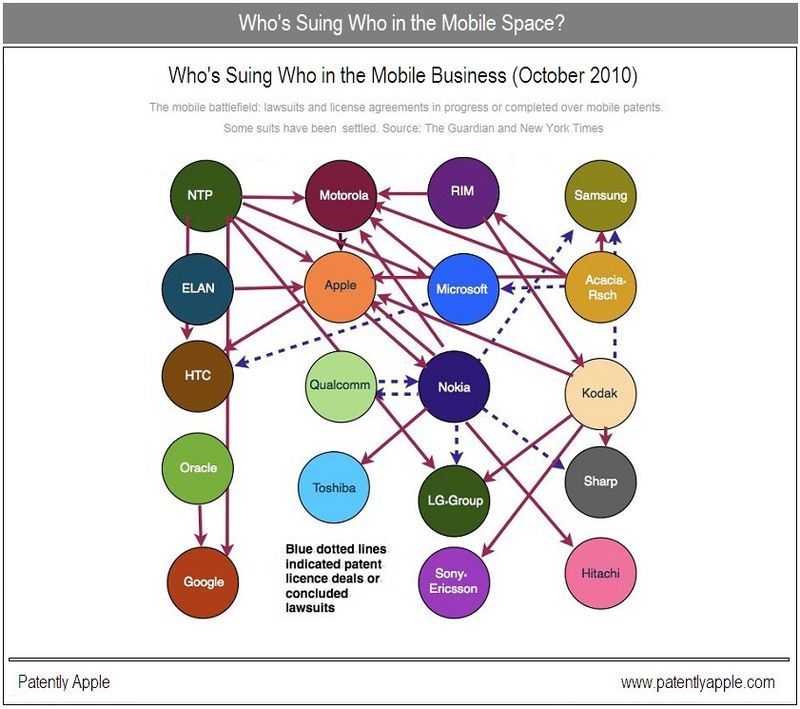 Update - Nov 23, 2010: Apple patent case against Motorola will be reviewed by the US International Trade Commission.

@ird I doubt you'll have a technological edge over anyone with the mentality you have towards technologies. Are you so devout that you refuse to use youtube or maps? Those are google technologies.

Google acquired the android team back in 2005, so your assertion that android wouldn't exist without iphone is ridiculous considering it was around 2 years before the first iphone release.

I'm not sure why you keep mentioning Google in an article about a lawsuit between Motorola and Apple. Google isn't being sued for IP infringement.

@Q: I can't believe you used cut & paste as example of how competition drives innovation. Pretty lame to me. And as for not buying any Apple products, that's ok with me. I'm always looking for the technological edges over others- you being one of them.

As for Google, an innovation, without the iPhone, Google and their partners would be still twiddling their thumbs at small keyboards and wondering how to incorporate Flash onto Blacberries. Basically Google and their partners openly feel that intellectual property is secondary when it effects their ability to stay revelent; when others try to directly to steal their IP, like in China, they get offended. Talk about being two-face!

@The_Omega_Man wow you do not look at the news, once the iPhone is on Verizon Android's market share will become irrelevant, unless they pull a rabbit out of the hat with 3.0 and make it polished enough to compete head on with iOS.

Apple is in the cat bird seat when it comes to UI and demand for it's phones, Android only sells well when it is the only choice (Verizon to date) or when it is much less expensive (2 for one deals on the last generation.

More to the point is the fact that Apple is on the outs with regard to patent pools by Motorola and Nokia with regard to basic cell phone technology, and all the others are in trouble if Apple's multi-touch patents are not invalidated.

The problem for the Nokia / Motorola / cell phone group is they have already set precedent by offering relatively low licensing fee's for others, while Apple does not yet have precedent setting fees for their Multi-touch patent portfolio.

A desperate attempt by Apple to stave off Motorola from their lawsuit. Apple is running scared thanks to Google and Android. Apple doesn't welcome competition, they loathe it. If Google can get Nokia on board with using Android, the circle will be complete, and Apple will be in the same place that they are in the PC market: A distant second or third. These silly IP lawsuits will not stop the Android Army.

@Ird, to your point about bringing Google down. Why is this important? I personally wouldn't want to buy Apple products. Are you saying it some how makes sense to have one company make all smartphones. If that's the case, I guarantee the iphone would not currently have copy and paste or a host of other features that were brought sooner rather than later. I agree with recognition and compensation where due but the idea that Google should crush Apple or Apple should crush Google makes no sense.

Between the iPAD at Verizon & AT&T and iPhone coming to Verizon in a couple of months plus the HTC & now Motorola lawsuits, Apple's surely to bring Android down to nothing.

And not to mention Oracle's direct assault on Google.

Finally!!!! It is about time Apple defends itself from rip off artists. Eventually Google needs to be nailed.
Good for Apple.

This is very interesting. The compulsory counterclaims in the Motorola-initiated case will still be filed by Apple in that particular case. However, the compulsory nature of those infringement claims only extend to the patents initially raised by Motorola in the Declaratory Judgment action.

Apple is still free to file an offensive case of infringement against Motorola on different patents, in a different jurisdiction.

This is a meaningful expression of might by Apple. Motorola has opened the flood gates on this infringement issue by attacking Apple's patents in the original suit. "Mutually Assured Destruction" anyone?

There will likely be some legal wrangling to determine if all of the cases will be moved to a single jurisdiction, especially by Motorola. This is common when you have suits venued in different jurisdictions that are directed to the same incident of infringement or products (e.g., Droid platforms).