A New Multi-Purpose iPhone Audio Adapter will assist the Deaf

On October 28, 2010, the US Patent & Trademark Office published a patent application of Apple's that relates to methods and apparatus for connecting together two electrical devices in which the mating connectors on each device are of different sizes. The mismatch of physical characteristics could be overcome through the use of an audio adaptor unit that is constructed from a plug having one dimension, a jack having another dimension and a coupler that physically and electrically connects the plug and jack together to form a single unit. In the future, this would allow a device like the iPhone to be coupled to such devices as the Ameriphone - cell phone for the deaf – and Bose's QuietComfort headphones. In a secondary patent published today, Apple reveals an early plug removal detection system that could help avoid iPhone disconnects that are caused by earphones jack connections.

Portable electronic devices, such as wireless and cellular telephones, digital media players (e.g., music players and video players), and hybrid devices that combine telephone and media playing functionality are known. These devices are typically configured to provide communications to a user in one or more modes. In some of those modes, the communications can be wireless, such as via a cellular telephone network, a Wi-Fi network, or Bluetooth communications. In those instances, the user interacts with another device or location to receive information in the form of audio, video or both.

The present invention addresses problems which exist through the use of wired connections. There are great number of accessories that are available for portable electronic devices, and particularly for hybrid devices which combine the functions of a cellular telephone with one or more additional functions, such as the storing and playback of music files. In most instances, the portable electronic devices have a connector that is one of a limited number of standard sizes for audio communications. For example, many cellular telephones have an audio jack that accepts 2.5 millimeter plugs, while many multimedia devices, such as iPods and DVD players, have an audio jack that accepts 3.5 millimeter plugs. One potential reason for this variation is that conventional audio headsets typically include a microphone signal, a monaural audio signal and a ground signal. As such, those connectors often are limited to three contacts.

The 3.5 millimeter connectors, on the other hand, rarely, if ever, include a microphone input, and instead, are often capable of providing stereo audio signals to the user. These devices include the family of products knows as "ear buds."

One problem with this scenario occurs when a user wants to use a device having one sized jack with another device having a different sized-plug. In addition to the size difference, there are often problems with a mismatching of signals between the two devices. This leaves the user with few, if any, options.

This problem becomes even larger with the further development of multi-use, hybrid devices, such as Apple's iPhone, which includes a 3.5 millimeter jack for mating with devices such as the Bose QuietComfort headphones. For example, in the instance where a user is using the iPhone to watch a movie, the user may want to use high quality, noise cancellation headphones to try and maximize his/her experience. In another instance, the user may want to place a call using a wired headset, which is typically a monaural 2.5 millimeter device.

Another type of electronic device where the size mismatch occurs is in the use of electronic equipment to aid the deaf in telephonic communications. These devices are often referred to as "TTY" devices. One such device is, for example, the Ameriphone Q90D Digital Cell Phone Compatible Combination TTY/VCO device. The Q90D enables a hearing-impaired individual to make cellular telephone calls by converting the audio signals to written form and displaying them to the user. These devices, however, uniformly require the use of a 2.5 millimeter plug. Thus, it would not be possible to use such devices with portable hybrid electronic devices having other sized connectors.

Methods and apparatus are provided for connecting together two audio components that have different size connectors and which may also have a different configuration of electrical contacts between them.

In one embodiment, the methods and apparatus of the present invention, an audio adaptor is designed with an audio plug of one size to mate with a first electrical device, such as Apple's iPhone, and an audio jack having a different size to mate with a second electrical device, such as a conventional, monaural cell phone headset having a single earpiece. In that instance, the plug would be a four-prong, 3.5 millimeter stereo device, while the jack would be a three-prong, 2.5 millimeter monaural device. In this instance, the adaptor would include circuitry to take one audio channel (i.e., the left or right channel), and couple it to the audio input on the monaural jack.

The mismatch of physical characteristics could be overcome through the use of an audio adaptor unit that is constructed from a plug having one dimension, a jack having the other dimension and a coupler that physically and electrically connects the plug and jack together to form a single unit.

The interconnection circuitry may solely be wires that are used to connect the selected prongs on the plug to the prongs on the jack (such as where only one of the left and right channels will be connected to the audio prong on the jack). Wires, however, may result in a larger coupler than is otherwise possible, in addition to the additional labor requirements that are likely to be necessary during the assembly of the device.

One alternative to using wires is, in accordance with the present invention, the use of metal tabs instead of wires. The metal tabs could be soldered or otherwise attached to the appropriate prongs on the plug and on the jack. Then, in an additional process step, the tabs could be attached to each other (once again, through soldering, or some other form of connection). In addition, because of the overall stiffness of the metal tabs, it would be easier to manufacture such a device since the tabs could be easily aligned without an assembler having to hold them in place as might be required when using wires. A still further advantage of using metal tabs is that they can be manufactured to have a specific orientation which could help account for the differences between the different sized connector components.

Thus, in this embodiment, a 3.5 millimeter stereo plug having a microphone input could be coupled together with a 2.5 millimeter monaural jack such that a single earpiece microphone headset can be used on a stereo device having a 3.5 millimeter jack. The audio adaptor could, if metal tabs are used for the interconnection circuitry, be a relatively small and compact device, which may make it easier to use. 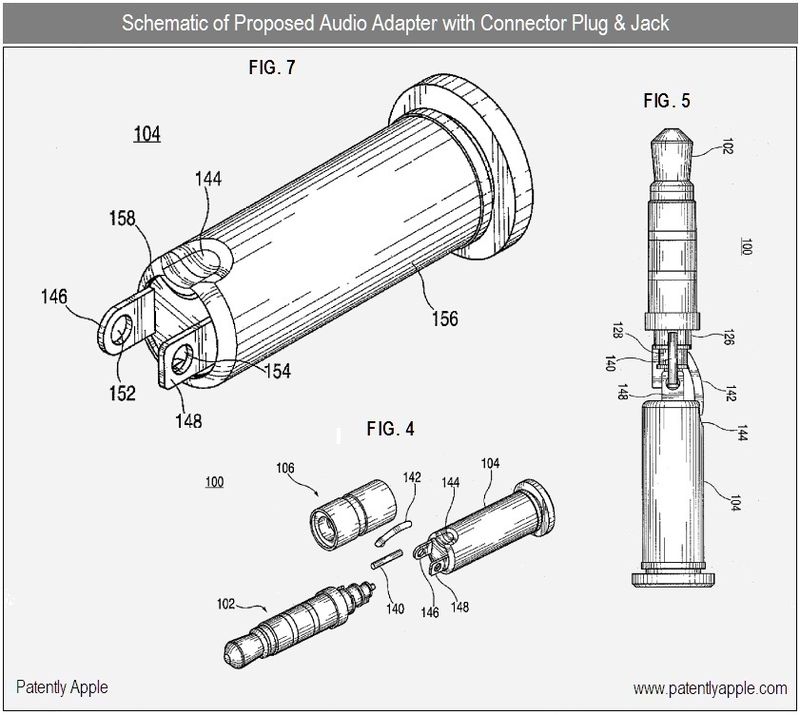 Apple's patent FIG. 4 is an exploded, three dimensional, perspective view, schematic drawing of an audio adaptor; Apple's patent FIG. 5 is a side view schematic diagram of a connector plug and connector jack that are used in accordance with the principles of the present invention; and patent FIG. 7 is a three dimensional, perspective view, schematic diagram of a jack, which is a portion of an audio adaptor constructed in accordance with the principles the present invention.

Apple credits John Tang and Robert Murphy as the inventors of patent application 20100273356 which was just filed in July of this year.

While we're on the topic of headphone jacks and audio adapters, there was another interesting patent published today that discusses other ideas on the matter. Apple's patent 20100272252 is titled "Microphone line based detection of Headset Plug Removal." 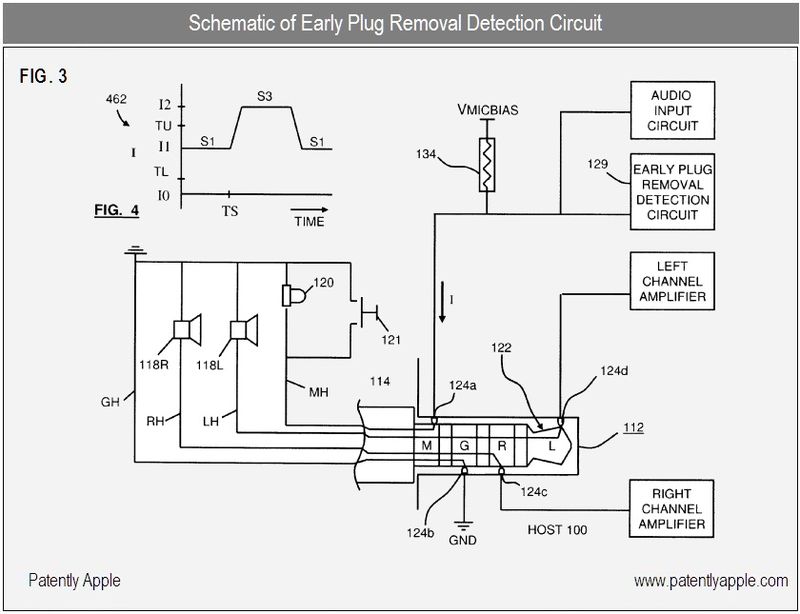 Apple's patent FIG. 3 shows an example of a headset jack, a headset plug, and electronic schematics of some embodiments of headset and mobile phone circuitry. Note that contact 124a is electrically connected to audio input circuit and to an early plug removal detection circuit.