Every once in awhile an engineer describing a product will in some form or another reveal an application or a new device that the patent is intended to legally cover and in doing so allows us to at least understand what future devices that Apple may have in store for us. Today, a simple patent covering an iTunes 9 feature for arranging and rearranging iApps on your desktop points to this feature applying to a PDA (iPod touch), smartphone (iPhone) and watch. Oh really? And to top off today's report we cover new patents that discuss GarageBand's "loops" feature and advanced syncing which is likely associated with yesterday's release of iTunes 10.

Apple's patent begins by stating that "handheld devices such as PDAs, smartphones, and watches have become ubiquitous. These devices are equipped with various graphical user interfaces that can display an arrangement of objects representing applications, documents, media, etc. on one or more views of a mobile computing device. Views can display an arrangement of objects or icons on a display of a mobile computing device to a user for their selection. When an object is selected, the application can be executed, the document can be opened, the media can be displayed, etc. A number of views can be used to arrange a large number of icons for selection by a user."

The inclusion and description of smart watches in this patent being ubiquitous is interesting being that they're far from being ubiquitous in the marketplace and that Apple has yet to introduce one. Yet Apple's engineer understood full well what other projects that Apple is working on and decided to include this device in the patent so as to patent-protect it.

Interestingly, we reported yesterday that the all-new iPod nano appeared to be evolving into a futuristic iWatch. The fact that Apple is acknowledging a smart watch in this patent therefore, would all but confirm that such a device is at some level of development at present. This isn't simply a matter boilerplate patent verbiage, as there are only three distinct devices being focused on in this patent – of which two of the three already exist at present.

Apple introduced iTunes 9 a year ago this month and with it they introduced a new and much needed feature designed to assist users with iOS application management. It allows the user to organized large numbers of iApps on their desktop instead of performing this task on their particular portable (iPhone, iPod touch, iPad – and future iWatch). For those of you who are unfamiliar with this feature could view this YouTube video for a brief overview. Below are various patent figures associated with Apple's Tunes 9 feature. 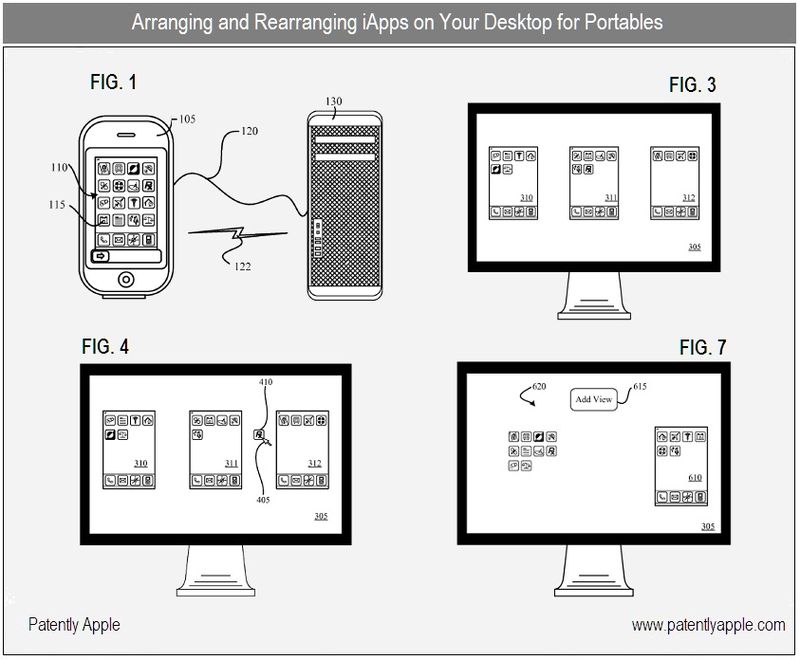 Apple credits James Green as the sole inventor of patent application 20100223563, originally filed in Q2 2009 or about four months prior to the introduction of this feature was introduced in iTunes 9.

Apple's patent generally relates to audio signal processing, and more particularly, to correlating audio signals. In fact, the patent is likely covering a feature called "Loops" found in GarageBand. Generally, a loop in audio processing may refer to a finite element of sound which is repeated using, for example, technical means. Loops may be repeated through the use of tape loops, delay effects, cutting between two record players, or with the aid of computer software. Many musicians may use digital hardware and software devices to create and modify loops, often in conjunction with various electronic musical effects. Live looping is generally referred to recording and playback of looped audio samples in real-time, using either hardware (magnetic tape or dedicated hardware devices) or software. A user typically determines the duration of the recorded musical piece to set the length of a loop. The speed or tempo of playing of the musical piece may define the speed of the loop. The recorded piece of music is typically played in the loop at a constant reference tempo. New musical pieces can be recorded subsequently on top of the previously recorded musical pieces played at a tempo of the reference loop. 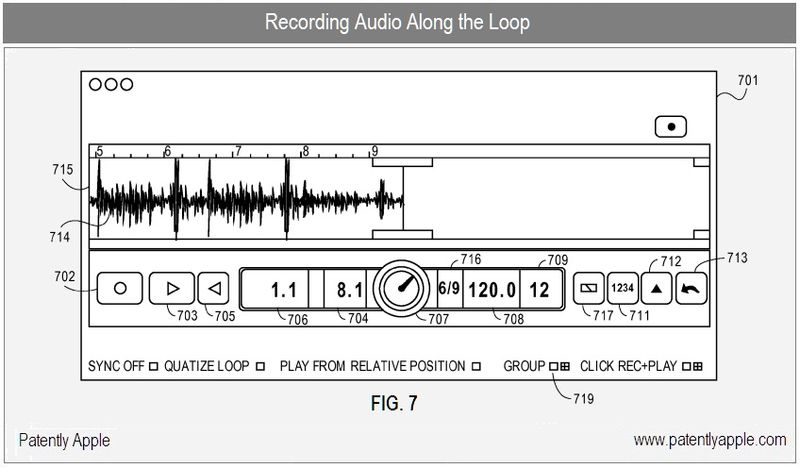 Apple's patent FIG. 7 shown above is a view of one embodiment of a graphical user interface (GUI 701) for recording new audio while playing back existing audio. The GUI includes an indicator 706 indicating a current relative position of the recording audio along the loop. An indicator 704 indicates a total length of the loop. For example, the total length of the loop may be any number (e.g., from 1 to 8) of measures and/or bars. The total length of the loop may be set by the user. The GUI further includes a "clock" knob 707. At the beginning of the loop, the position of the clock knob is at zero, and the knob moves around all the way back to zero like a little "clock" as the audio is played back one time in the loop.

Apple credits Chris Moulios as the sole inventor of this patent originally filed in Q3 2009.

Techniques and systems are disclosed in Apple's patent for enabling over-the-air (OTA) synchronization between a client device and a server. In particular, a wireless structured data synchronization protocol could enable a client device to interface with a server to synchronize various data. Such protocol could be used to synchronize Mac Operating System X (OS X) SyncServices data between a handheld device such as the iPhone and a server such as the .Mac server, for example.

The synchronization protocol is simpler than conventional protocols, such as Synchronization Markup Language (SyncML). Apple's patent FIG. 1a shown below is a block diagram of a system for enabling data synchronization between a client device and a server. 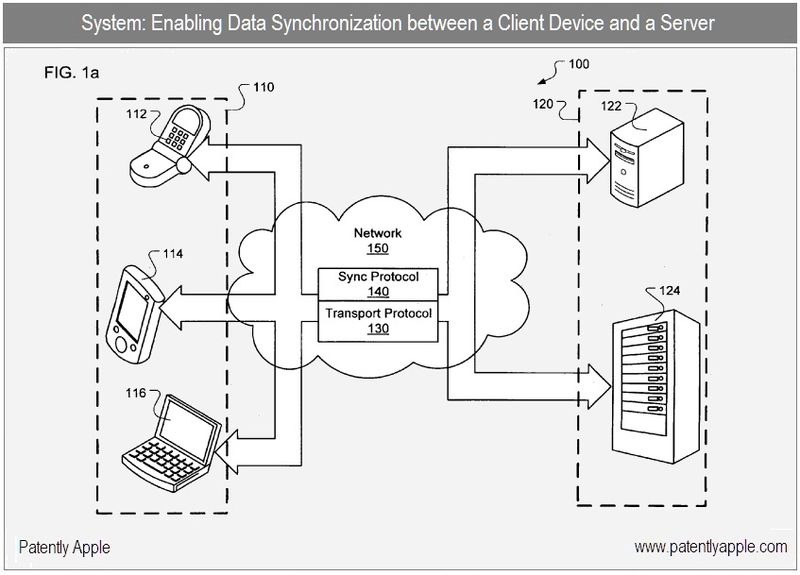 Apple credits Brendan McCarthy and Carsten Guenther as the inventors of this patent originally filed in Q2 2010 – or four months ago. This may have played a role in the "Improved Syncing" introduced with iTunes 10 yesterday.