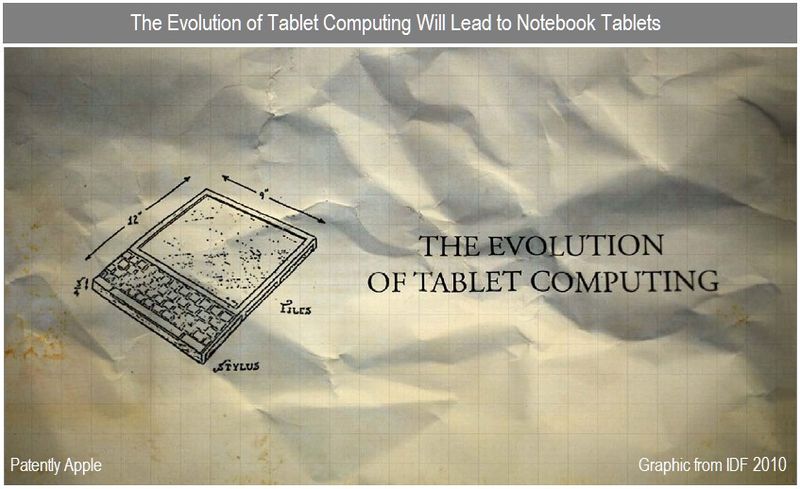 At IDF this week Paul Otellini presented us with a broad overview of the multiple ways in which Intel is aggressively acquiring companies as they transform from being primarily a one dimensional chip company for computers and servers into a multi-tiered computing solutions provider. In David Perlmutter's keynote we learned about a great new 3D wand that is in the making that happens to mirror what Apple is working on in their lab. In a third keynote delivered by Intel's Doug Davis, we were given an overview of the rapid changes that are occurring with Intel's Atom Processors which will be entering the embedded space in 2011. Yet once again, the surprise of this keynote came in the form of a presentation by Dell who revealed a new notebook-tablet. It appears that Dell is on cue to beat Apple to market with this new hybrid notebook in time for the all-important Christmas shopping season. This report shows you Dell's device and some of the changes coming to Intel's Atom processor. 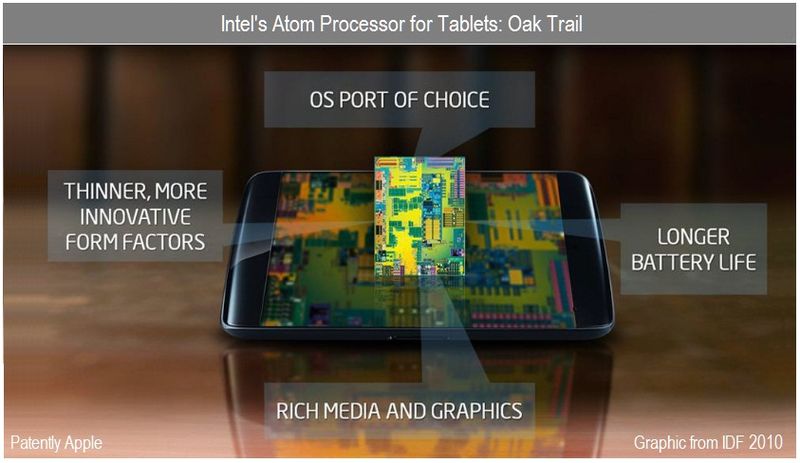 On stage, Davis presented a new Oak Trail based mini-tablet from Korea's Ocosmos for running Windows-based gaming debuting in February 2011. It's a five inch tablet or slightly larger than an iPhone or iPod touch so as to cover for the controls. The big surprise of this keynote came from Dell of all places. Dave Zavelson Senior Manager of Product Marketing UltraMobile Devices at Dell came on stage to present their upcoming 10" dual-core Atom processor based tablet for Windows 7 that will sport WiMax, a new horizontal docking station and an interesting music app. Pulling up the music App to play radio brings up a "touch-globe." The globe allows the user to rotate it and and touch a city or geographical area of choice which will call up a radio station. I don't know if that's a Windows development or a Dell exclusive, but it shows that touch based devices are pushing everyone in the industry to come up with new ways of interacting with touchscreens. 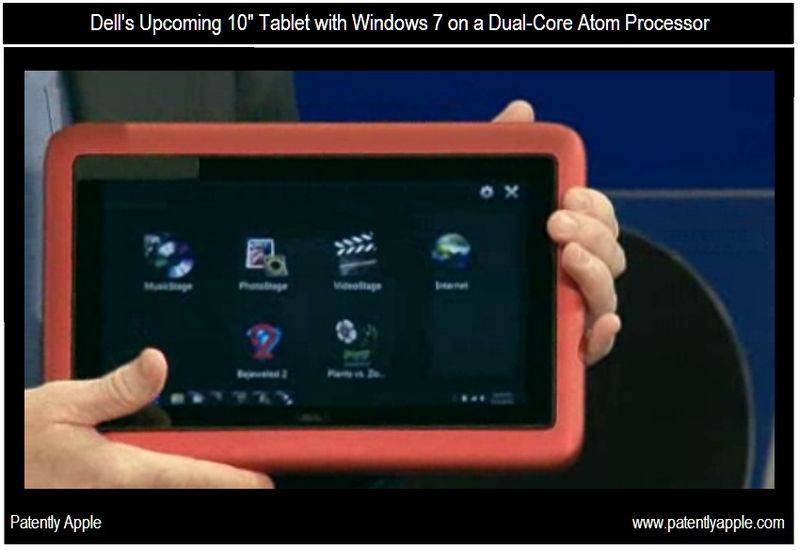 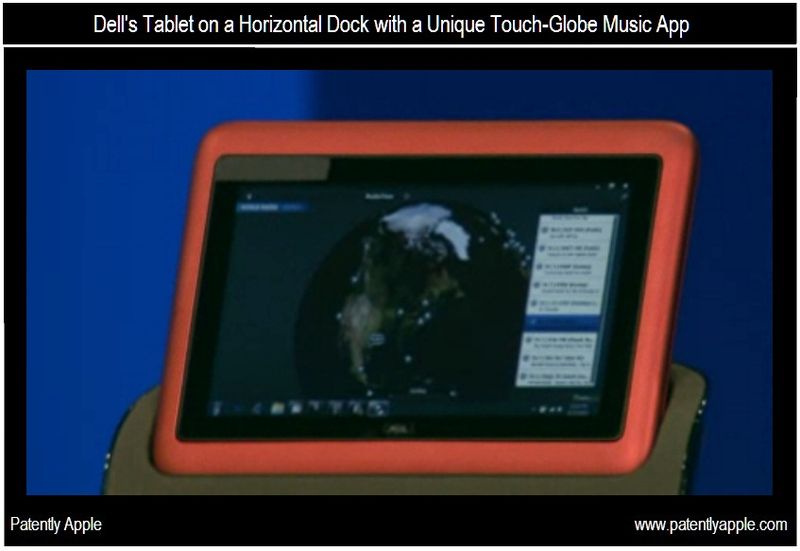 Yet the big surprise came at the end of Dell's presentation when Mr. Zavelson confirmed and demonstrated a new double personality tablet. The tablet's second personality turned out to be that it easily converts into a notebook-tablet; one that will be ready to ship in time for Christmas. Dell's Inspiron Duo will run Windows 7 on a dual-core Atom processor and naturally come with a flip-style keyboard. 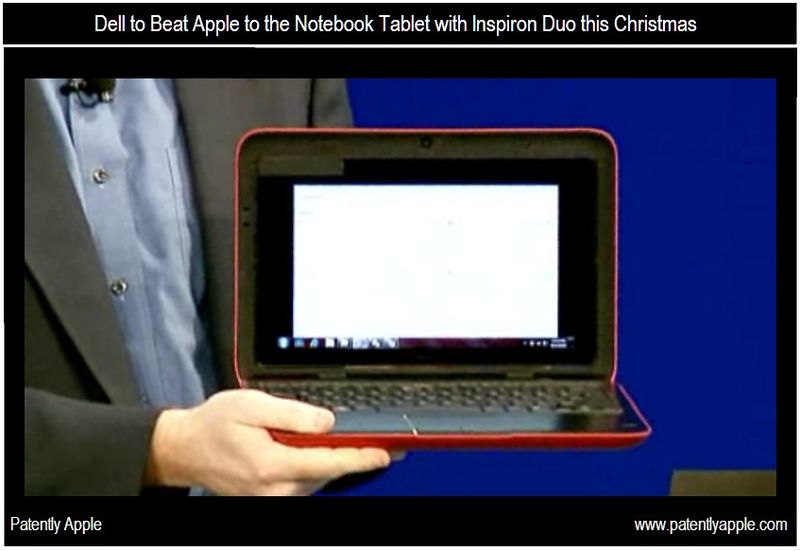 It was just this past August that we were privy to see that Apple was seriously considering such a unit. Apple's patent presented us with various concept drawings of a proposed iMac Touch while touching on the fact that the touchscreen concept would spill over to a future MacBook. So – Will Apple upset Dell's momentary victory this fall with a surprise launch of a MacBook Touch – or will it be Apple falling behind in this inevitable hybrid category? Time will tell.

Stellarton: A New Configurable version of Atom Due in H1 2011

In a segment of Mr. Davis's keynote framed as "what's next?" – He describes a very important shift for the Atom processor. He started with the question "How do we make Atom even better? Well, the answer to that came only in the form of a sneak peek into 2011.

Mr. Davis stated that "we started with the E600 series processor, taking the best-in-class density performance at 45 nanometers. We kept the ultra-low power, low-cost, all the flexibility. We kept the goodness that Atom delivers with the IA software community. And we added a field programmable gate array into one chip. And to do this, we worked with a market leader, Altera, a pioneer in the world of programmable logic solutions. And the result is an exciting blend of world-class performance and programmability." 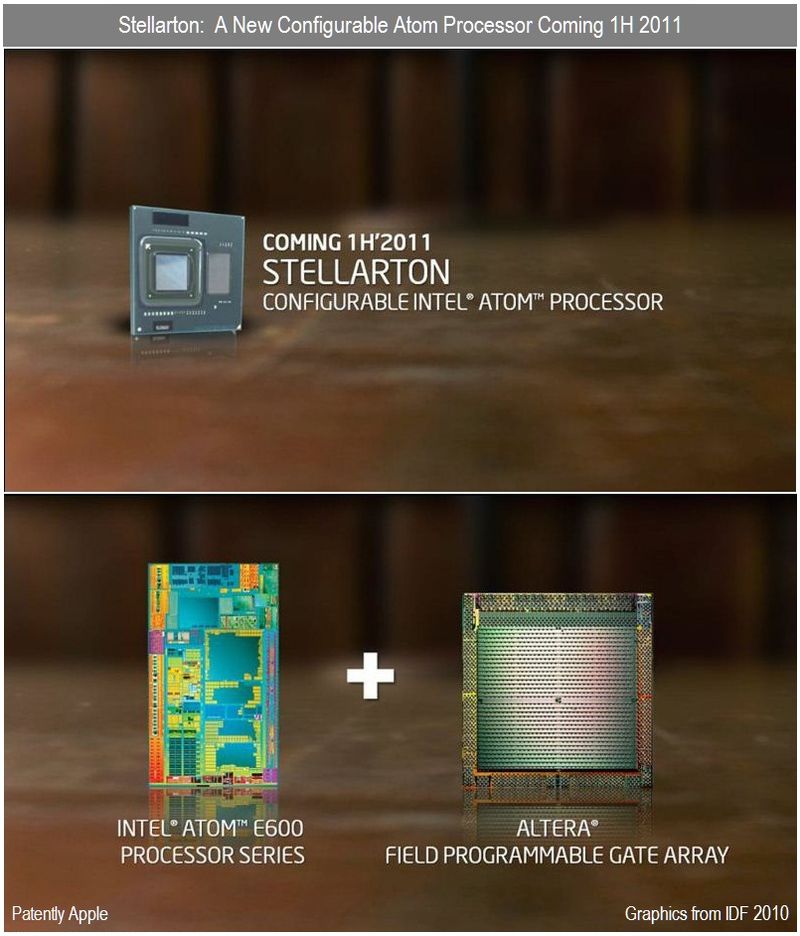 "So I'm giving you a sneak peek here today of a new product. It's in the making: It's called Stellarton. It's coming in the first half of 2011."

Stellarton will allow developers to shorten the time from definition to implementation of new features and more importantly, allow developers to add specific differentiating features into an Atom processor. Not that it mean anything to Apple today, but at some point it may allow Apple to consider an Atom based solution. The one thing that struck me about the Atom as it enters the embedded market is that Apple may have to develop products for Atom if only to tie them into their own ecosystem.

The future of in-vehicle infotainment systems rolling off the assembly line will likely end up choosing Intel's platform which offers a Port of Choice option. With the all-important in-vehicle mass going Intel's way and Smart TV getting ready to rock this Christmas, I wouldn't be surprised to see Apple eventually develop something for this architecture down the line. Time will tell – but Atom seems to be gaining great momentum. That was clearly evident during this keynote.

Below you'll see an Atom storyboard that we put together: read it left-to-right level by level.

The Evolution of Tablet Computing

The cover graphic for today's report was obtained from the keynote titled "Creating the Experience Continuum" by Renee James Senior Vice President, Software and Services Group. In one of the initial segments of Renee's keynote she introduced the original GRiDPad which was first introduced in the market in 1989. The GRiDPad now resides in the Computer History Museum in Mountain View California.

It should be said that while Intel and Microsoft had tried to make the tablet a commercial success over many, many years – the fact is that they collectively failed miserably. Conversely, Apple's revolutionary iPhone and now iPad have captured the imaginations of consumers all around the world - in record time no-less. It is Wintel once again, in many ways, who are now trying to play catch-up.

The evolution of tablet computing will continue this fall where we're likely to see new advancements from Apple and new entries from those supporting Android and Windows 7. The tablet wars will likely be ongoing until the end of this decade.

For those of you who are interested in the keynotes mentioned in this report – simply click on the following links: "Smart, Connected, Transformational" (Doug Davis); "Creating the Experience" (Renee James).

A very simple solution for the macbook tablet, an upright barrel hinge that has a pin through it for it to go horizontal. This way the barrel can be split in 2 for a natural 360 degree spin for the lid when it is upright meaning it can be closed with the screen face up. This will also mean that the screen can be pivoted to show others something without moving the entire laptop. much better than a complicated sliding hinge!

I was wondering when someone would start putting out devices with FPGA's to assist the core, or perhaps a device with it's entire core or 2 or 4 or 6 of these things in it's guts...

@ Jack. Every once in a while I let a PC ranter's comment sneak in just to demonstrate their unballanced views and anger. Did this report talk about Jobs as a control freak? No. Did it mention anything about Apple pricing? No. So I think that you should stop clicking your heels togehter and mumbling to yourself Jack before the Funny Farm Team comes to take you away to the wonderful Wizard of Oz.

I was waiting for someone to remind us that Apple products are overpriced and that Steve Jobs is a control freak. Let's keep the mantra going and wish him away. Might want to try clicking your heels three times and mumbling something to yourself.

Apple is almost never first to market. They weren't the first to market with a digital music player, a tablet, or a smartphone. "First" is meaningless. What matters is creating a user experience that inspires imagination and captivates the public. Further, if Apple is interested in entering this hybrid market, it will garner press attention far beyond that of what Dell or any other PC maker can muster and one really shouldn't underestimate good PR. Finally, Apple would no doubt launch such a device with an ad campaign that makes it seem as if the competitors products never existed.

If you look closely at the Dell prototype, you could still see the display being held up with a velcro strip in the left hand corner. It'll be interesting to see if Dell was all-talk or if this device really comes to market on time as presented at IDF. Because velcro at this stage of the game is a little silly. We'll know in good time.