Apple's Mad Men are focused on Tracking You

Apple is at it again. They've apparently acquired yet another target marketing patent and now that they're rolling iAd out aggressively, there's no turning back. Some believe that iAd could eat up half the mobile ad market in the future while most think that Apple is really out to challenge Google. More importantly perhaps is that actual paying customers of iAd's services, like Nissan, have seen their ad time-traffic soar ten-fold. All the more reason why Apple is seeking to further fine-tune their target marketing capabilities - and in today's patent report we'll take you on a short trek through the mindset of the ad industry as it schemes to further burrow their tracking technology into Apple's iOS devices like only Mad Men could.

The proliferation of these new multimedia mobile phone devices and the implementation of wireless application protocols (WAP) have created a ripe market for the presentation of mobile-enabled content and advertising, which provides significant revenue opportunities for both third-party advertisers and wireless carrier companies. Some of the key challenges in providing targeted content and advertising to users are (i) to be able to accurately identify the user as often as possible, and (ii) to maintain comprehensive usage histories for individual users. The combination of these two capabilities leads to improved ad targeting and an enhanced user experience as users are provided with the content they want, when, where and on what device they want it.

While there have been many solutions with respect to traditional web usage (i.e., users browsing websites from a personal computer), no such solution provides the same depth and breadth of user profiling for mobile web usage, much less for identifying the same users as they alternate among delivery channels.

While there are many differences, one key distinction is the added complexity of supporting multiple phone types, network types and carriers. For example, carrier-specific mobile identifiers such as x-up-subno and msisdn identify each subscriber with a unique user ID and pass it through request headers. However, the request header names vary from carrier to carrier, as some carriers may use phone numbers as the unique user ID, whereas others may use a randomly generated ID. Moreover, content providers (e.g., content distribution networks, advertising networks, etc.) cannot access a carrier's identifiers or headers when they are removed or scrambled from network data flows. This lack of information limits third-party mobile networks from providing a consistent experience to their users across different devices, carriers, and content formats.

In cases in which the mobile device supports the use of device-resident cookies, a network cookie identifier can be set. When a page request is serviced, a cookie is placed in the mobile browser. Such an approach does not work, however, for devices that do not accept cookies, or in cases in which the user disables such functionality. In implementations in which WAP gateways honor non-persistent cookies, session identifiers may be used to track session-specific usage, but such an approach does not provide a complete or persistent picture of a user's behavior over time.

What is needed, therefore, are techniques and supporting systems to track users and site visitors across multiple networks of mobile media properties as the users interact with the properties via mobile web, SMS, within mobile-device resident applications and conventional "wired" content sites.

Various aspects of Apple's invention facilitate the tracking and profiling of users of mobile devices and media. More specifically, the techniques described in the patent enable uniform user tracking across the major pillars of mobile media interaction--web, SMS, application usage and wired-to-mobile--using a network-resident cookie and hash matching. Such an approach implements user tracking via a "server-side cookie" that leverages device support for cookies (if available) but does not depend upon it. Such an approach also supports tracking for sites across multiple domains absent browser support for Javascript tags as well as cookies.

The network cookie enables advertiser targeting across multiple user sessions, content distribution channels, devices, and across different media interactions. Furthermore, data gathered over time enables the clustering of users having similar behavior patterns. Each of the mobile channels supplies unique data points to enable richer targeting and clustering based attributes of the content requests. As examples, mobile web sites identify content interests (based on the sites visited by a user); SMS supplies a phone number (from which we may derive a location); application supplies precise location (on platforms such as the iPhone). The user cookie/record is then augmented with these data points and uses the data for site personalization and targeting purposes. 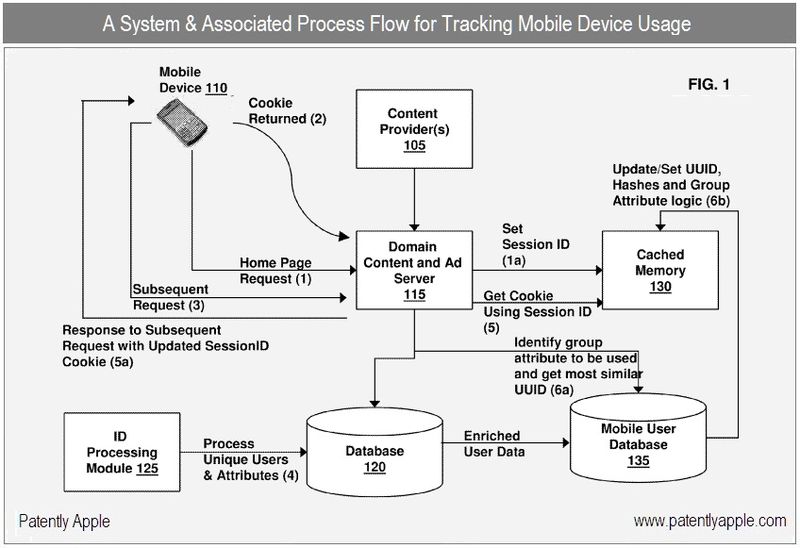 To associate specific content requests to particular users and/or sessions, a hash_id is created as a unique user ID (UUID) for users in a locality-sensitive manner which optimizes the group containment logic of mobile users based on different attributes. The constituent attributes are spread across different dimensions (device type, model type, carrier, behavioral patterns, etc.) and thus captures various data points for each interaction. A probabilistic matching technique is then used to identify content requests that emanate from the same user (or device), to facilitate targeted advertising and content delivery.

The request attributes could be a device ID, a carrier ID, a telephone number, an account number, a MAC address, an IP address, a location, a SIM card ID, and/or a device model. The request attributes may be assigned to one group, no groups or in some cases more than one group. The groups may, in some cases, be unique across users. In some embodiments, a match confidence level is calculated that represents a degree of match between mobile content requests. In such cases, the match confidence level may be used to sort the mobile content requests, and some number (e.g., the top k requests where k is an integer) of the requests are assigned to a single mobile subscriber. The number of selected requests may be predetermined and/or based on a minimum confidence level threshold. 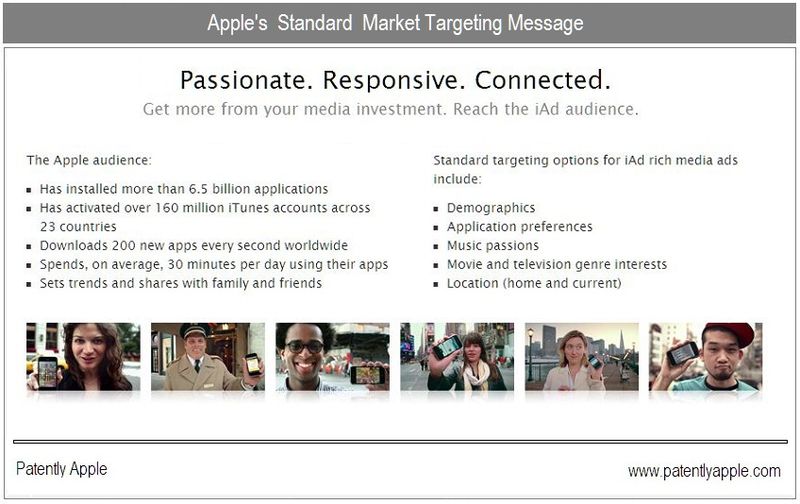 What do you Think about Ads and Target Marketing Schemes?

Every one of Apple's Ad patents provides us with a piece of the larger picture. The depth of tracking is both intriguing and alarming. Many are personally uncomfortable with this level of tracking and yet ads are a necessary evil if you're interested in hearing about new and interesting products. The problem is that for every cool and informative advertisement that we see, there are 10 obnoxious or useless ads which turn us all off to ads in general. General ads on TV are like that but they're not tracking you. It's the latter phenomenon of tracking that has us wondering if there's an industry watchdog keeping an eye on this segment of the industry's activities.

The fact that our phone numbers are associated with tracking techniques to specifically locate us is disturbing if that information gets into the wrong hands. For every responsible company like Apple, there must be 100 if not 1000 or more unscrupulous companies that would sell your phone number and other collected information for a dime.

A cell phone is no longer just a cell phone. That's progress and well appreciated. I'm just not sure that we really understand where all of this tracking of our activities will or could lead. It'll take some kind of a horrific incident where this tracking technology has lead to a death, kidnapping or rape for the public to finally realize and wake up to the fact that phone-tracking technology could have consequences down the line.

Where do you stand on tracking technologies? If you have a point on this subject matter that you could articulate well, please send in your comment below. Rants will not be posted. Thank you.

I don't buy stuff with my phone so i don't worry about this stuff. All I hope is that Apple is upfront with us and spells out what they're tracking specifically and if we have the option to opt out. For the simple stuff, I'm not concerned at all.

My equilibrium is fine with this, as long as I don't hear the two scariest words:"Trust Me"

Ad Men = Mad Men. Brilliantly postitioned. I never really thought about stuff like this before. Session cookies are one thing, but all this tracking with phone numbers is too much. I checked out other reports you filed on this subject and tracking will permeate every thing over time. Every purchase we make with a future electronic wallet application and that's where this could get spooky.

Apple should discuss this at a future keynote to clear the air so that we get the facts and not let speculation run rampant. It's early in the ad game for portable devices and Apple has time to set the facts straight. That said, is it not a conflict of interest to cross a device owner with an ad company? That could be a legal issue down the road for Apple.

To Apple: The public really doesn't understand where you're going with tracking. It would be great if you could put out a clear press release or set a part of a future keynote aside to just explain the technology in plain English.

The funny thing is anything Apple does seems to make people uneasy but they never complained about the personal data that Google is collecting on them.

Apple's ad that you show above lists some targeting attributes that they present to companies today. Location, home and current is one. Application tracking is another. Now we read this and know that even more ways to track our purchases at the Apple Store and at other retailers. It's a new market that Apple has entered and there's going to be a learning curve.

Apple should do for ads what they did for geo location services as this site covered (see link below). They should go out of their way to give us the option to shut off all ad-related tracking on iOS devices. If they give us that level of privacy, they'll be shown to be leaders. If they don't, they'll be showing us that they're not the company that we thought they were. Thanks for the report.

It would seem that this patent is a classic. The patent is admitting to finding a way to collectively track a user on any device using various new methods that the phone companies may have overlooked at protecting us. The race will be on to continually foil the efforts of cell phone network operators from protecting our phone numbers and this is a disturbing trend no doubt. This patent appears to even have a way around cookies. So this is what makes us uneasy about this technology and if it gets out of control, the industry players like Apple will suffer. You saw the mania over the "death grip" non-issue. What if there was a real issue related to tracking technology gone wrong?

Privacy is going to be the issue of this decade with technology companies continually telling us to "get over it," or that privacy is dead, just so they could justify their greedy behaviour of tracking the hell out of us for profit. To that I say, shove it, we'll call the shots on that issue bucko! Am I along on this? I don't think so.