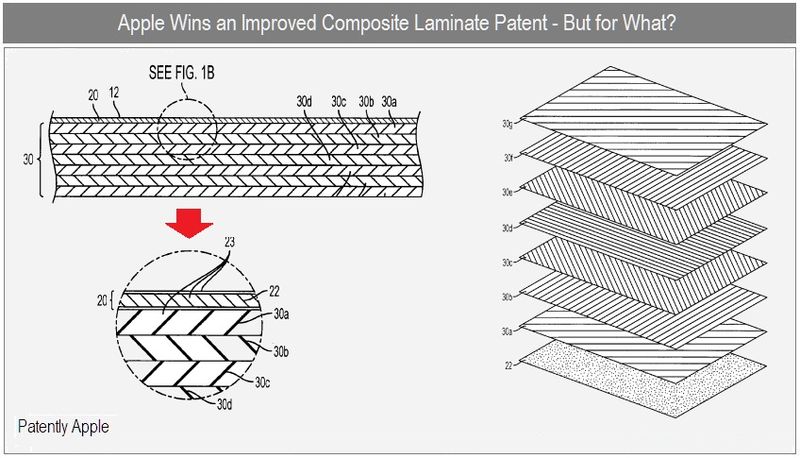 Every week we get to peek inside a little corner of Apple's R&D labs in some capacity. This week we're privy to seeing one of Apple's R&D teams thinking of of using a new material that could end up in any number of future Apple products. The material is basically regarded as a composite laminate that could consist of a wide range of materials including glass, synthetics, metals (such as aluminum or titanium) – or even epoxy. Apple's patent is as secretive as they are. It provides absolutely no guidance whatsoever as to how they intend on utilizing this new kind of material – though it's commonly used in real-world products today ranging from an iPad cover to all manner of sporting equipment such as golf clubs, baseball bats, canoes, bikes, skate boards and more. Yet all we know for certain at this point in time is that Apple has been granted a patent for supposedly improving the cosmetic surface of this material.

Many products are formed of plastics because they are light weight and can be readily shaped and styled. Electrical equipment enclosures, such as enclosures for computers and portable electronic devices, for example, are typically formed of plastic materials to make aesthetic, functional housings. Plastic housings for electronic equipment can be both rigid and lightweight, and can be durable without being bulky. Electronic equipment enclosures also typically provide shielding against electromagnetic pollution, such as that which emanates from the electronic device or exists in the surrounding environment.

Plastic housings for electronic equipment may be prepared from plastic material reinforced with carbon fiber. Carbon fiber reinforced plastic, also referred to as carbon fiber composites, provide a very strong, lightweight material for forming housings for electronic equipment. Carbon fiber composites may be formed by layering sheets of carbon fiber material into a mold that is the shape of the desired product. The mold may then be filled with a thermosetting resin (e.g., an epoxy resin prior to being cured) and the resin cured to thermoset the resin (e.g., autoclave cured and/or vacuum bagged). The mold may also be filled with a thermoplastic resin that is then "cured" in the sense that after the resin conforms to the shape of the mold, it is cooled until the thermoplastic resin is below its glass transition temperature and therefore maintains its shape. Another method of producing carbon fiber composites is by layering sheets of carbon fiber material that has been preimpregnated with thermoplastic resin or partially cured thermosetting resin (or has a layer of thermoplastic resin or partially cured thermosetting resin layered over each sheet) into a mold that is in the shape of the desired product. This assembly may then be placed in a vacuum or is subject to thermal compression until the resin fully cures. 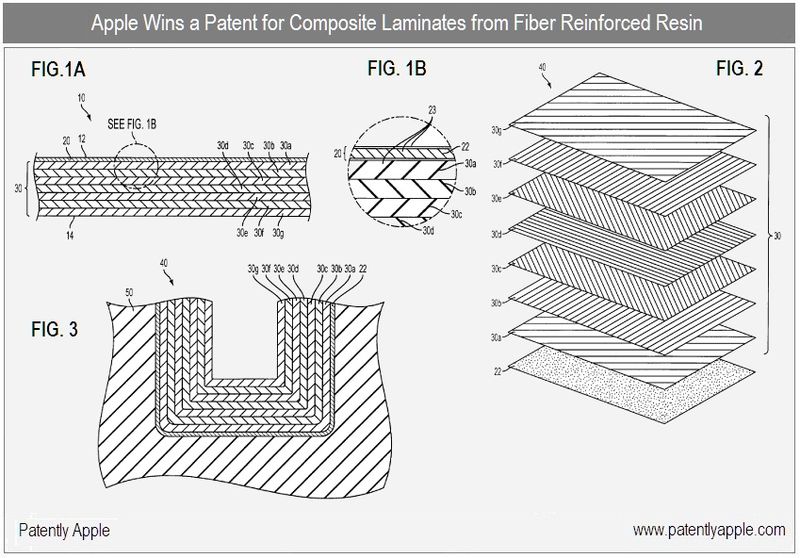 The fibers of scrim, noted above in patent point #22, may be carbon fibers, glass fibers, and synthetic resin fibers (e.g., aramid fiber). The fibers may also be inorganic fibers such as metal fibers (e.g., aluminum fibers or titanium fibers). In one embodiment, scrim may be a nonwoven glass fiber scrim, and in another embodiment scrim may be a nonwoven carbon fiber scrim, such as Part #1064 produced by Fibre Glast Developments Corp. of Brookville, Ohio. Also, in one embodiment, scrim 22 may be impregnated with resin. 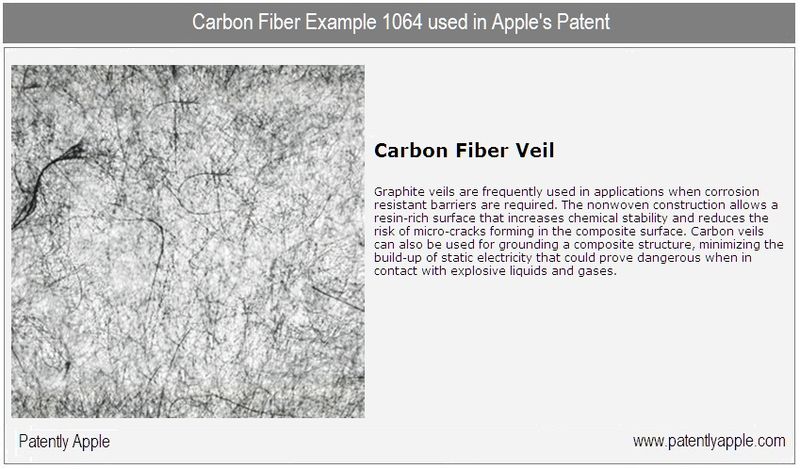 The resin may be clear or pigmented. Clear resin would provide the most visibility of scrim and the underlying fibers of composite 30, and therefore provides a greater perception of the depth to surface than pigmented resin.

It should also be noted that Apple's patent incorporates an acquired 1993 Japanese patent number 5,201,979 to ensure that they had the rights to this process. 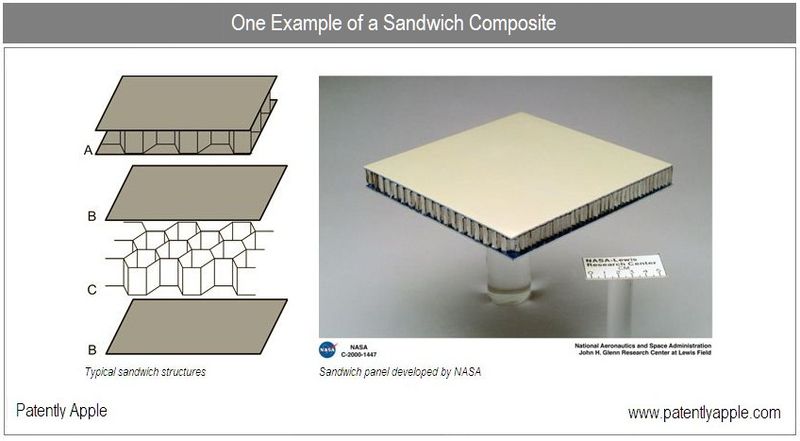 On this page you'll find a discussion on carbon fiber composites where they show a method of construction known as the sandwich composite. That page also mentions carbon graphite or aramid fiber, as mentioned in this patent. It also points to sporting applications such as a carbon bike or tennis racket. Another site also confirms that it's also being used for golf clubs and other sporting applications. Of course such examples, gets one thinking about Apple's own extreme sporting patents in respect to future smart snow boards and skis as well as a smart bike. And if Wikipedia is correct, then we could actually all end up with bulletproof portables in the future. Yes, every superhero should have one.

Then again, this material is also used for practical applications as well – be it for iPad and/or iPhone covers. Apple could also be rethinking their use of polycarbonates in their MacBook for a much lighter material and using the sandwich method as shown above. Hmm, who knows – maybe the new Apple TV is already using one of the material variants. I haven't been able to find out exactly what they're using. Is it a thermosetting plastic as mentioned in this patent?

Where and how Apple will end up using this material is unknown at this time - simply because of the wide range of products that Apple could apply this too - including future wearable computers. In time we'll be sure to hear about this material as it comes to market in some surprising way. For now, all we know for certain is that Apple has been granted a patent for an improved cosmetic surface regarding this material and that it's paved the way for Apple to now bring it to market.

Apple credits John DiFonzo and Chris Ligtenberg as the inventors of the Granted Patent titled "Composite laminate having an improved cosmetic surface and method of making same," originally filed in Q4 2007.