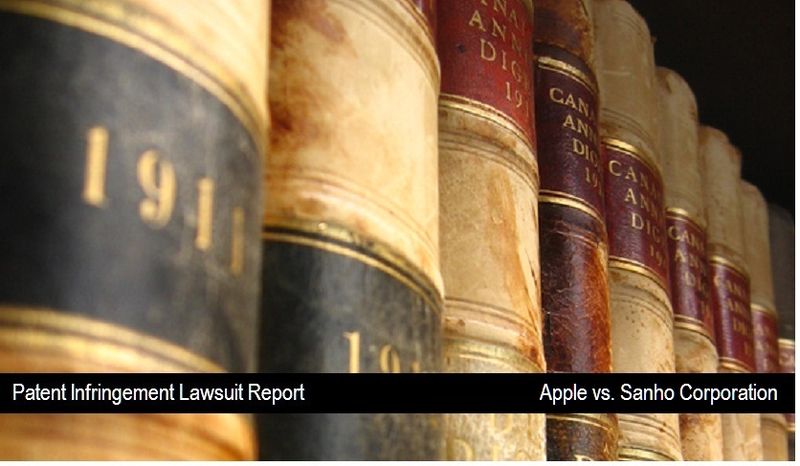 On September 10, 2010 Patently Apple initially covered the newly discovered patent infringement lawsuit that Apple launched against Sanho Corporation, the maker of the HyperMac product line. The original filing delayed the release of the complaint from being made public until today. The complaint is a whopper considering that it covers six distinct patents that Sanho Corporation has allegedly infringed. All of the revealed patents relate to, in one way or another, cables and the MagSafe connector specifically. Our report presents you with an overview of the complaint in addition to providing you with hyperlinks to each of the infringed patents that were found in this lawsuit for easy review.

The first patent listed in the complaint which allows us to understand the overall nature of the suit is a 2009 granted patent titled "Magnetic Connector for Electronic Device" under 7,517,222 ("the '222 patent").

According to the complaint, Defendant Sanho has "directly and/or indirectly infringed and continues to infringe the '222 patent through its manufacture, use, sale, importation and/or offer for sale of at least the products identified above that include the MBP-PRO and/or MBP-AIR connectors. Defendant Sanho's advertisements and marketing materials, including but not limited to internet websites and product packaging, demonstrate specific intent to encourage customers to infringe the '222 patent through use of the identified products. For example, product packaging for MBP-100 states, "Power your MacBook …" and "MagSafe Charging Cable: MacBook Air, MacBook Pro" and displays an image of a HyperMac products attached to the MagSafe receptacle of a MacBook computer." The indentified products are especially made or especially adapted for use with Apple computers in a manner that infringes the '222 patent, are not staple articles or commodities of commerce, and are not suitable for substantial noninfringing use. For example, the product packaging for the MBP-100 states "MagSafe Charging Cable* …*Based on using MacBook Air.", a label affixed to the MBP-100 products states, "HyperMac External Power for Apple MacBook."

The filing states that "Defendant Sanho's infringement of the '222 patent has caused and continues to cause damage to Apple in an amount to be determined at trial."

Apple's complaint goes on to point to "the defendants website www.hypershop.com, through which it sells and distributes various consumer electronic products, including, among other products, external batter for Apple MacBook computers in the following sizes (product identifiers in parentheses): 60Wh (MBP-060); 100Wh (MBP-100); 150Wh (MBP-150); AND 222Wh (MBP-222). Defendant Sanho also distributes and/or sells the HyperMac Pure DC Car Charger for the Apple MacBook (MBP-CAR). At least one variation of each of these products includes one or more charging cables that utilize what Defendant Sanho describes as "original Apple MagSafe connectors for maximum compatibility." The MagSafe connectors are of two types – connectors that are compatible with the MacBook and the MacBook Pro computers (MBP-PRO), and connectors that are compatible with the MacBook Air computer (MBP-AIR)."

Apple makes it clear in the complaint that "Notice of Defendant Sanho's infringement was provided by Apple in, for example, correspondence dated April 26, 2010, May 19, 2010 and June 22, 2010, and Defendant has had actual notice of Apple's patents and infringement contentions since at least that time. Knowing infringement of the patent is objectively reckless and the objectivity-defined risk was known or should have been know by the Defendant, entitling Apple to enhanced damages pursuant to 35 U.S.C. 284 and to attorneys' fees and costs incurred in prosecuting this action pursuant to 35 U.S.C. 285."

Apple demands a trial by jury. The filing was submitted by TOWNSEND and TOWNSEND and CREW LLP, Pal Alto California.

Update Oct. 18, 2010: According to this Hypershop webpage, Sanho is in licensing negotiations with Apple. As a condition of licensing, Sanho will first cease selling MagSafe products as of November 2, 2010. 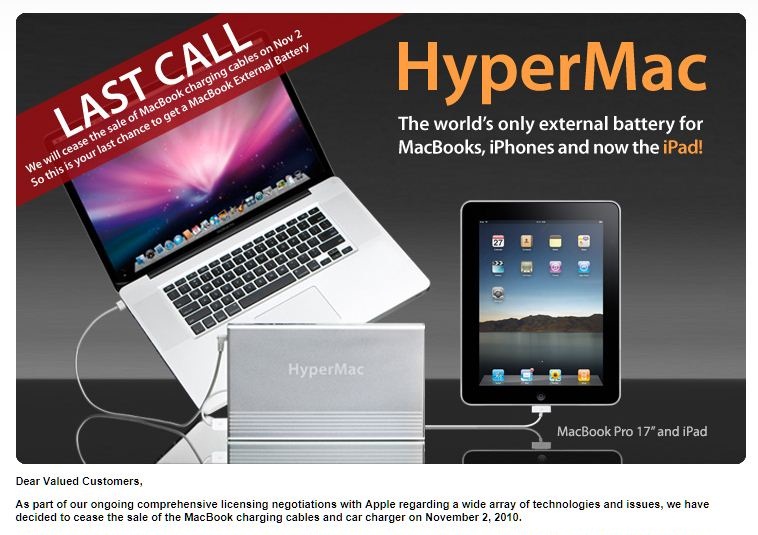 If I read the suit correctly, looks Apple thinks Hypermac was making magsafe connectors... I suspect they were making them, then claiming they were buying them from Apple.

I find it had to believe that Apple has any case since the connectors are from actual Apple power supplies purchased by Sanho. The only leg they have to stand on is possibly "re-purposing". As far as I know it is not illegal to use a patented part you purchase in the construction of a product.

I am aware that a number of companies have tried to license the Mag-Safe connector and Apple has, to the best of my knowledge, refused to do so.

Sounds like Apple is playing hardball against a small vendor and trying to drive them out of business.

Play with the bull and ya get the horn.