One of the more interesting patents that have surfaced this morning out of a total of fourteen is one that describes a new audio sensory system for the iPhone. The new system uses an acoustic leakage analyzer to determine noise leakage and then compensates for external noise so that the user could receive much clearer audio during a call. The sophisticated system uses a variety of new sensors to achieve this quality.

People have long been accustomed to making telephone calls using a handset whose earpiece portion the user typically presses up against her ear (in order to better hear the voice of the other party.) As mobile phones became prevalent, the acoustic system that delivers sound to the user's ear was faced with a variety of environmental conditions, in particular varying levels of background noise. A mobile phone might be used in a quiet room until the user walks outside to a noisy street. The intelligibility of sound from the earpiece (produced by the so-called receiver or earpiece loud speaker) is reduced when there is a raised ambient noise level. In addition, it is typical for the user in that case to want to press the handset more firmly to his ear. If the receiver is too loud, the user may pull back or lift off the handset to move the earpiece away from her ear.

The earpiece has been conventionally designed in such a way that it produces good sound pressure and quality, when it is mostly sealed or in a particular sealing condition against the user's ear. If there is a larger gap, that is a larger leak between the earpiece and the user's ear, this usually causes a significant weakening of the sensed sound pressure. Manufacturers try to ensure that the volume and frequency distribution of the sound from the earpiece is in accordance with their specification, in actual or real operating conditions where the earpiece is rarely completely sealed against the user's ear. In other words, the handset has to have the ability to tolerate or adapt to such acoustic leakage in its earpiece region.

Apple's patent takes it a step further by introducing an acoustic leakage analyzer that is coupled to the touch sensing earpiece region to analyze signals from the region and on that basis adjust an audio processing parameter (that is used by an audio processor to generate an audio receiver input signal for the device). This allows the device to automatically adjust the audio processing parameter to compensate for acoustic leakage between the user's ear and the earpiece region.

The user display region may be part of a solid state display panel such as an LCD panel typically used in a communications handset or may be in a separate physical component than the touch sensing panel in which the earpiece region is formed.

Apple's patent FIG.1 shows that the touch sensing earpiece region contains several touch-activated regions – shown here as regions 16_1, 16_2 and 16_3 which are considered to be islands as they don't link to each other in any way. Any part of the ear that isn't pressed firmly to the phone is considered a leakage area. 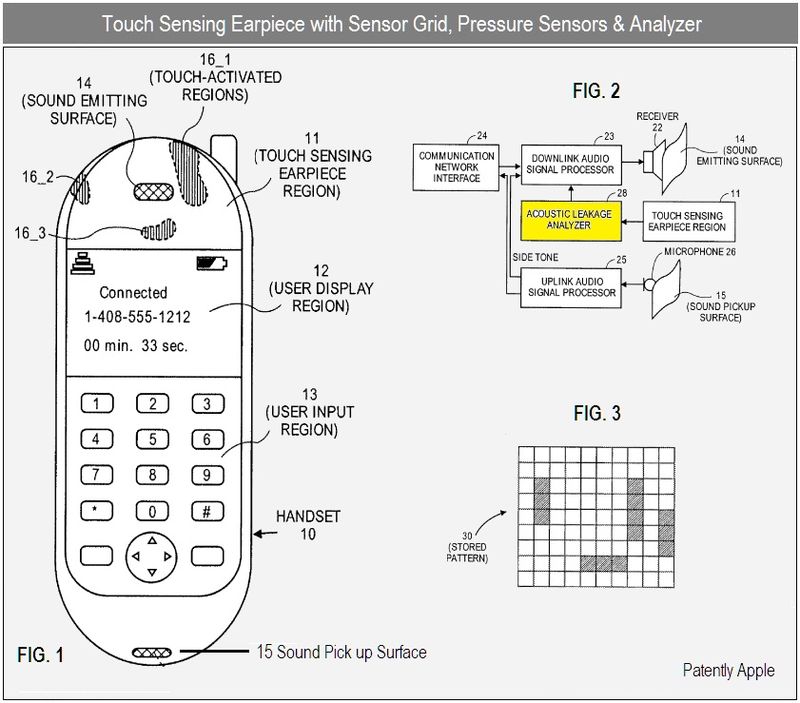 An acoustic leakage analyzer 28 found in patent FIG. 2 is coupled to the touch sensing earpiece region analyzes sensor signals from the earpiece region, and in particular the pattern of the touch-activated regions 16 and on that basis adjusts one or more audio processing parameters. The parameters are automatically adjusted to compensate for acoustic leakage between the near end user's ear and the earpiece region. How and which audio processing parameters to adjust may be determined in advance. This may be based on, for example, laboratory experiments that evaluate the quality of the sound heard by the near end user for different levels of acoustic leakage detected. Various instances of a near end user pressing the handset against their ear could be tested. For each instance a suitable set of adjustments to one or more parameters could be selected and stored in the device.

The block diagram of patent FIG. 2 shows some additional relevant functional components of the iPhone. The intelligibility of sound heard by the end user may be improved as follows. First, the acoustic leakage analyzer 28 analyzes signals from the touch sensing earpiece region which may indicate which portions of the earpiece region have been activated due to essentially touch (which is also understood to include near touch), by the user's ear. The analyzer detects one or more separate touch-activated regions 16 and may then compare these to a previously stored pattern to, for example, determine how well the earpiece region is sealed against the user's ear.

Apple's patent FIG. 3 shows an example pattern 30, for example, in terms of activated squares or sensors in a grid representing the surface of the earpiece region that may be stored in a memory of the device. A rough measure of the level of sealing achieved in a given instance may be the extent to which the active grid elements enclose or encircle the central region of the grid (where the sound emitting surface 14 is located). In addition, the enclosed area (or the roughly enclosed area) may indicate the size of the user's ear and therefore the volume of an acoustic cavity that is formed in front of the earpiece region. Depending upon the experimental results, certain arrangements of active grid elements may be found to represent better acoustic seal conditions. Such findings could be stored in the iPhone and readily accessible by the acoustic leakage analyzer in real time so that the audio parameters of the downlink audio signal processor 23 may be updated dynamically during a call, as the user's ear seal level changes as the user repositions their handset against their ear. 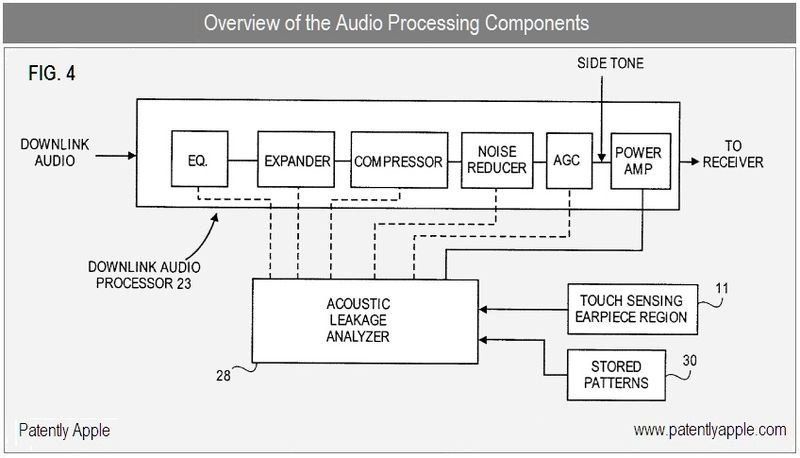 Note that changing one or more of these audio processing parameters may generally be expected to result in changing both the sound pressure level and the frequency content or spectral characteristics of the acoustic output of the receiver (which is delivered to the user's ear from the sound emitting surface 14).

In one example, a parameter of the equalization block and/or the expander block may be adjusted so as to boost a frequency response range that is below one kHz, relative to a frequency response range that is above one kHz. It has been found that this lower frequency range suffers more than the upper frequency range as the acoustic seal worsens. Other parameter adjustments are possible. Also, note that not all of the audio processing components depicted in FIG. 4 are needed to provide the user with a comfortable sound in every instance.

Two other patents were published today covering an Application Development Portal. One is titled "Configurable Offline Data Store" (20100250671) and the other is titled "Ad Hoc Distribution (20100250946). The patent figure below appears in both patent applications. 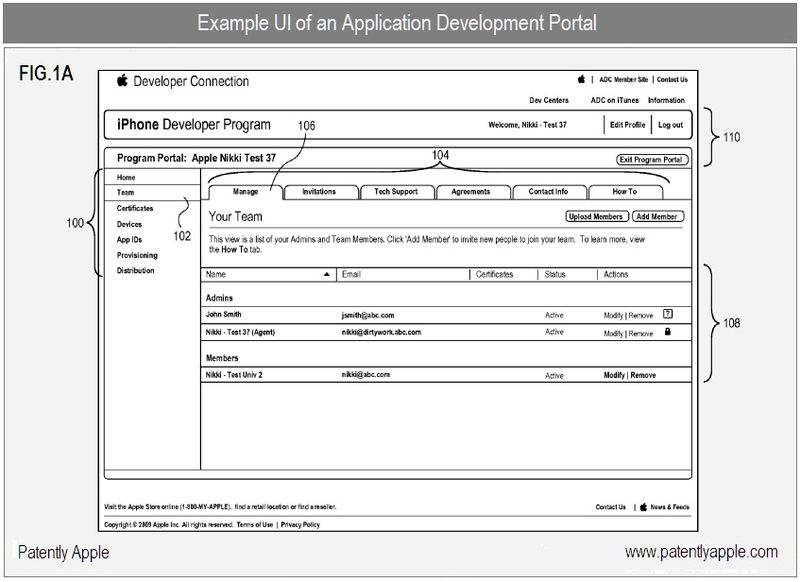 Additionally, a new group of patents have surfaced this morning relating to LED backlit MacBooks and other LCD related matters under the following: Temperature based White Point Control in Backlights 2010244701; Aging based White Point Control in Backlights 20100245228; LCD Electrode arrangement 20100245224; and, LCD Panel having Improved Response 20100245723. For more information on any of these patents you could simply feed the patent numbers into this search engine.

And lastly, if news about new heat sink technology from Apple stirs you up, then you could check out their latest patent 20100246133 entitled "Method and Apparatus for Distributing a Thermal Interface Material. 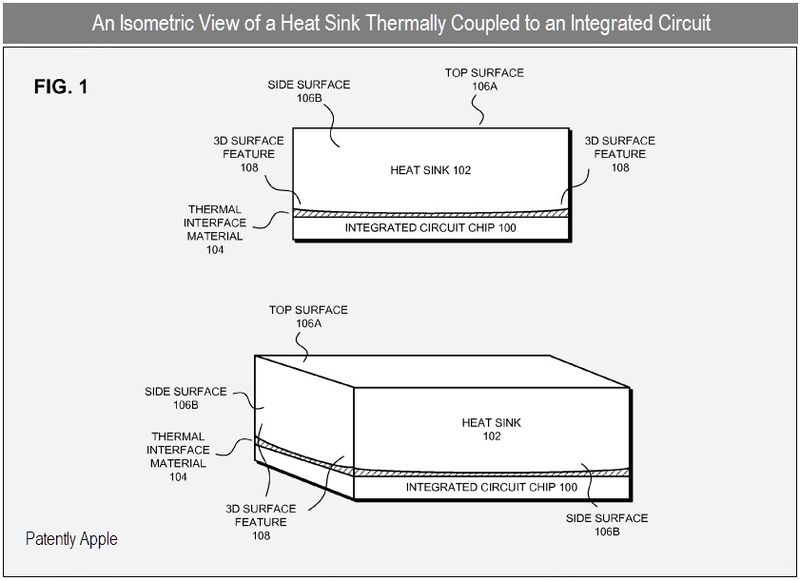