There was a little secret divulged by Apple's CEO Steve Jobs at this year's Wall Street Journal D8 conference, hosted and produced by Walt Mossberg and Kara Swisher. It was that Apple had actually designed and created a tablet device first and then shelved it in favor of going to market with the iPhone first. Well, today the US Patent and Trademark Office officially published one of Apple's classic tablet and handheld patents first filed in 2005. It didn't look like much at the time and the naysayers said that Apple would never ever bring a tablet of any kind to market because of the failed Newton and Tablet PC. Today we celebrate Apple's vision and courage of conviction for bringing us the Revolutionary iPhone.

I always get a kick out of naysayers who look at a patent figure and say "that doesn't look like something Apple would design." I can't even begin to tell you how many times that I've heard these kinds of silly, if not ignorant comments over the years pertaining to patent graphics. Patent graphics are presented for the purpose of conveying a concept and Apple's Classic iPhone Patent Figure FIG. 10 shown below is one to remember for the history books. It sure didn't look like a sexy cellphone when this patent figure was first publically published by the US Patent and Trademark Office sometime between 2005 and 2006 – but it ended up being the patent figure that would kick start the smart device revolution. 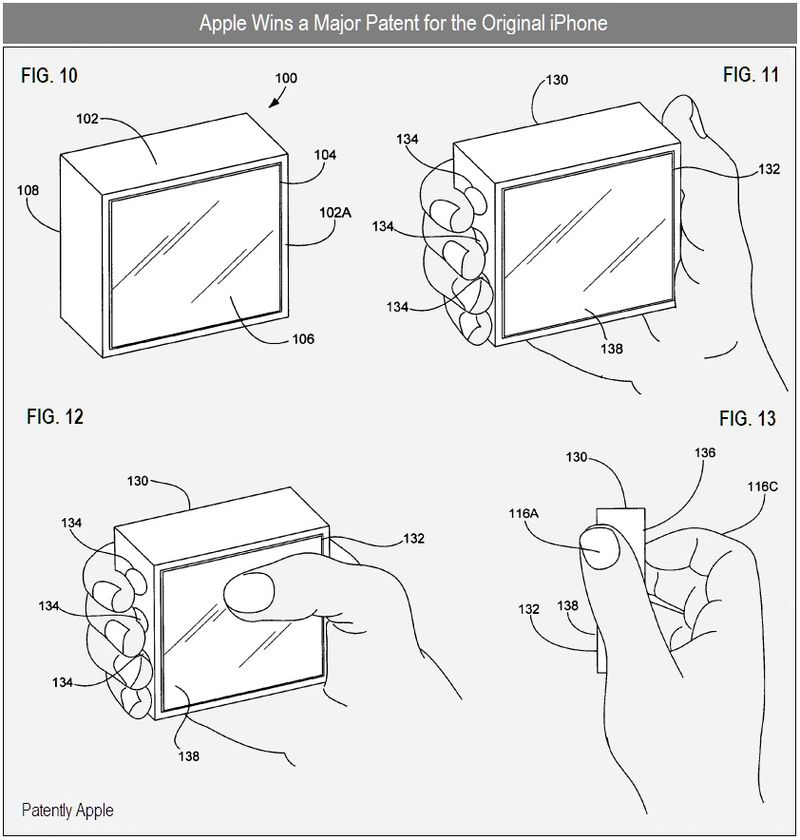 Some of the Original Patent Verbiage Associated with Original iPhone

"It should be noted that in embodiments associated with being hand held, the portable electronic device described above may correspond to any consumer related electronic product configured for handheld use. By way of example, the portable electronic device may correspond to tablet PCs, PDAs, media players (music, images, and video), game players, telephones, cellular phones, mobile radios, cameras, GPS modules, remote controls, and/or the like. 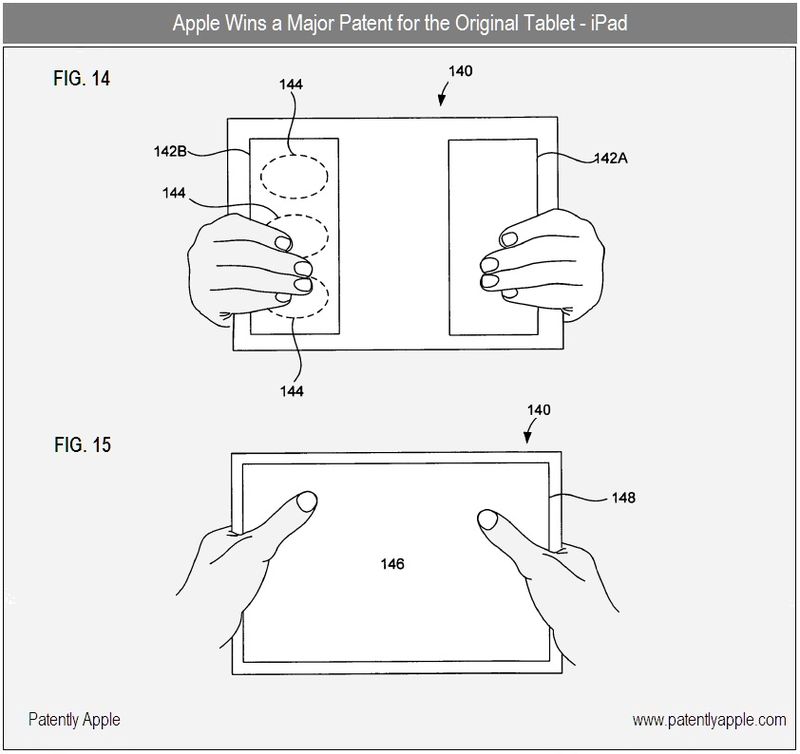 Some of the Original Patent Verbiage Associated with Original Tablet, Now the iPad

As shown in FIGS. 14 and 15, the "two-handed" hand electronic device in the form of a tablet PC is sized and shaped for comfortable placement into both of the user's hands. Each hand essentially cups the sides of the device 100, with one hand gripping the device on one side and the other hand gripping the device on the opposite side. Alternatively, the user is also able to hold the device in one hand while inputting into the device with the opposite hand. Although the shape of the tablet PC may be widely varied, it should be pointed out that the general size including height, width and thickness of a tablet pc is typically "page sized".

The size of the tablet pc may be widely varied. The size may be based on such factors as display size, display format, etc. By way of example, the tablet pc may have a height of about 12 inches, a width of about 8.5 inches and a thickness of about 1 inch (or less).

It should be emphasized that page sized is not as transportable as pocket sized. However, by being page sized the device can include increased functionality that is not capable in smaller devices. Furthermore, page sized devices typically must be used by two hands and therefore they are not as convenient to use when on the go.

To review the entirety of this classic granted patent, see patent 7,800,592. The inventors of this classic patent are listed as Duncan Kerr, Steve Hotelling and Brian Huppi. The patent was originally filed in Q2 2005.

Apple has won a design patent for the iPhone 3G/3GS. While the filing date is noted as being Q3 2009 – which would definitively make this design for the iPhone 3GS, there are other original design patent documents being cited in the patent which date back to April 2008, which would place the timing at two months prior to the release of the iPhone 3G. The design win is for the external design and both the 3G and 3GS shared a common outer shell dimensionally. 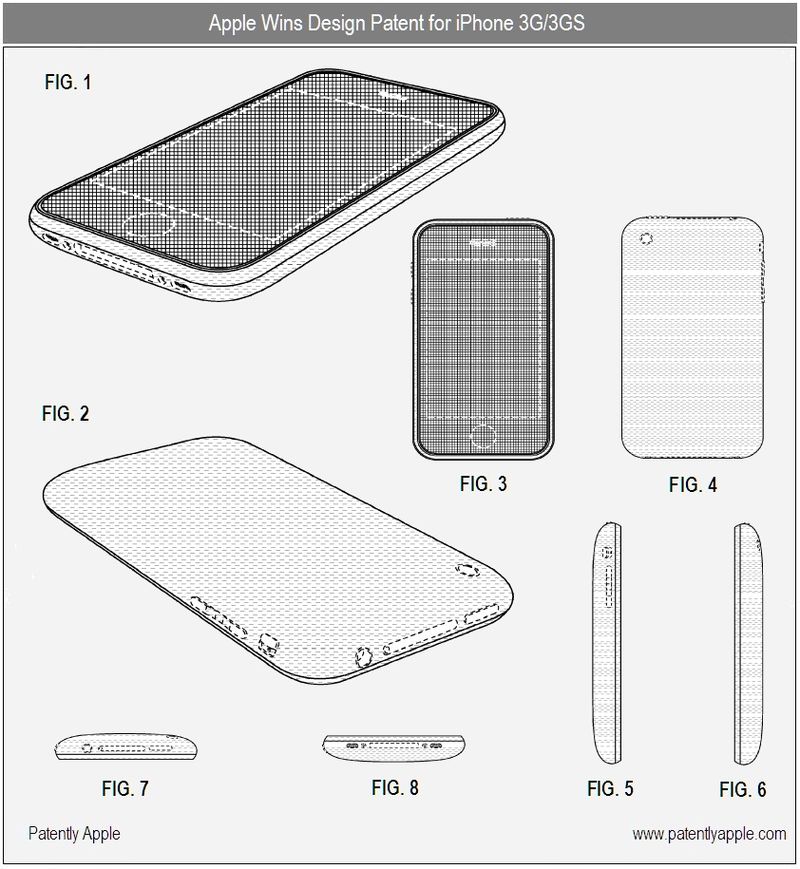 Apple has been granted a patent for their Music Icon which is found on all of their iOS touch based media players. The music icon activates the user's on-device iTunes library.

Two of the more important minor granted patents published today include  the following: The first is GP - 7,800,618 for "Method and Apparatus for Providing an Animated Representation of a Reorder Operation." This oddly named patent relates to Apple's iChat, instant messaging system. They describe it as a GUI for displaying an exchange of messages during an instant messaging session, and more particularly, to a method and apparatus for graphically communicating a reorder operation by animating movement of data items, such as names, contained in a list. The second is GP -  7,800,617 for "Compare Mode for Variable Number of Images." This patent appears to relate to iPhoto for both the desktop and touch related iOS devices. The proof that it relates to touch based devices as well is derived from a secondary patent that is referenced in this patent (7,561,157) which is from the same inventors. The secondary patent's claim number 16 clearly states: "input from a light pen, and input from a touch screen."

Yet other granted patents published today include, GP - 7,801,906 for System and Method for Storing and Retrieving Filenames and Files in Computer Memory; GP - 7,802,196 for Method and Apparatus to accelerate scrolling for buffered windows; and GP - 7,802,120 for Methods and apparatuses for Dynamic Power Control.

I don't understand why they would get a patent on the music icon rather than a copyright.

We're looking at history in the making. When I'm 90 I'll be reading or watching this documentary on PBS. "It was Apple in 2007 that started the smart device revolution with the iPhone. The historic documents of 2005 and earlier show us the craziest little box imaginable. Who knew that this crazy little box would turn out to be owned by 20 billion people in 2070....." Ha!