Could Apple Deliver Sandy Bridge Based iMacs for Christmas?

Most of us in Techland want to know how early Intel's next generation architecture known as Sandy Bridge will be. Although Sandy Bridge was originally scheduled to be released sometime between mid to late 2011 – Intel had been whispering differing early release dates. Apparently the rumor mill has decided to try and upstage Paul Otellini's keynote next month by releasing supposed "secret" slides and other data pertaining to Sandy Bridge ahead of time. That works just fine for Intel who's hoping that the rumors and buzz surrounding their new chip architecture will drown out any possible positive press coming out of AMD's forthcoming presentation at Stanford University's Hot Chips Conference later this month concerning "Bulldozer" – AMD's challenger to Sandy Bridge. At the end of the day, the rumors surrounding Sandy Bridge's release date may have been falsely volleyed so as to provide Intel's Otellini with a chance to score a little shock and awe of his own during his upcoming keynote. The question remaining is - could any good news about an earlier release of Sandy Bridge translate into new iMacs in time for Christmas?

Intel's Sandy Bridge is their next generation microarchitecture, successor to the current Nehalem which uses the 32 nm process brought on by Westmere. Sandy Bridge will be an evolutionary step up from their current Core i5/i7 Series. Sandy Bridge will introduce a single die containing both 32 nm CPU and GPU and advance all things HD and 3D.

In the last few days, rumors have been flying around the net concerning new major Sandy Bridge specifications which began to roll out from sites like China's XFastest on August 7th and others ever since. The other sites include EXPreview (China), Computerbase (Germany), TechConnect, Electronista and Engadget who added information about Intel's upcoming solid state drive upgrades. Yet all of the sites have one thing in common: The belief that Sandy Bridge won't actually ship, in any form, until Q1 2011 – likely after Intel's CES keynote. 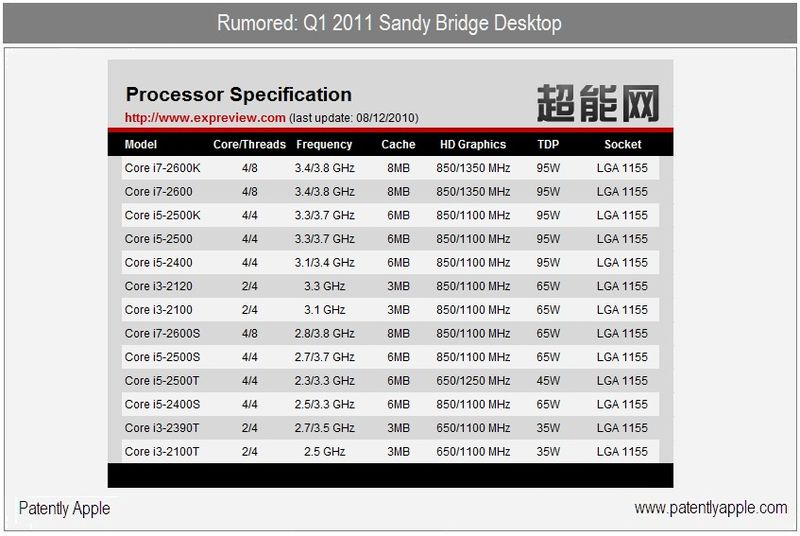 Yet during Intel's July financial conference, Paul Otellini hinted that Sandy Bridge, the next generation micro architecture could ship earlier than first thought. They were supposed to be shipping the new processors to PC OEM's in Q4 2010 for ready to ship retail computer systems in Q1 2011. That's pretty much in line with last week's rumor mill. Yet Otellini stated during Intel's financial conference that Intel had accelerated their 32mn Sandy Bridge schedule which would translate to at least shipping them out one quarter earlier.

Here's what Otellini stated exactly: "In closing, I want to mention our upcoming product family codenamed Sandy Bridge. Last quarter I mentioned that we were broadly sampling this product to our customers. I'm more excited about Sandy Bridge than I have been on any product that the company has launched in a number of years.

Due to the very strong reception of Sandy Bridge, we have accelerated our 32nm factory ramp, and have raised our CapEx guidance to enable us to meet the anticipated demand."

Otellini knew full well that his timing revelations would pique analysts' interest and so he continued by stating that "We look forward to seeing many of you at our September IDF Conference in San Francisco, where we will share more details about this new architecture." Whether Otellini was simply ramping up Intel's PR to appease the financial analysts at the conference in the hopes of gaining a favorable spike in their share price or was really revealing a manufacturing scheduling truth of being ahead of schedule is not yet known at this time.

Just to make sure that everyone is up to speed on what AMD's Bulldozer is — it's a brand new PC architectural design featuring up to 8 cores for client products and up to 16 cores for server products. Bulldozer will feature a new floating point unit that could support up to 256-bit floating point execution, which will boost the performance for technical applications that rely on floating point math. AMD will be introducing this new processor in 2011 and it will be a very strong competitor to Intel's Sandy Bridge – if not one that could possibly overtake it in the marketplace.

AMD will provide an overview of the next generation Bulldozer architecture at Stanford University's Hot Chips Conference on August 24 as well as disclose new details about "Bobcat" their other new core architecture for 2011. AMD is already stating that they'll be providing the press with a series of updates after the conference detailing their plans to bring Bulldozer to a much wider audience than previously thought. Bulldozer was thought to be a server only architecture.

Most of Intel Developer Forum's (IDF) are both informative and mildly entertaining. We've been following them for a short while ourselves now in the hopes of catching some of the finer points of interest for Macites. Most of the time there's more hype than substance, but in general, it's wise not to miss the event.

Very little has transpired since Intel's overhyped "Light Peak" revelations of last year and we're still awaiting news as to why they've yet to openly support USB 3.0. Admittedly they've introduced a handsome series of new chips that are fueling Apple's latest crop of iMacs, but they seem to have had a stretch of bad press of late.

There was the PR screw up when Intel suddenly closed the doors to their WiMAX office, leaving the press to have a field day with that issue. Then there was news that came out of Dell's bombshell that shined a light on Intel's huge kickback schemes based on choosing Intel chips over rivals like AMD. And then the darker side of Intel came to light with specific details. The FTC stated in one example that "Intel's actions caused software compiled on an Intel compiler to run more slowly on other chipsets."

It stands to reason therefore that Intel's CEO Paul Otellini really needs to hit a homerun during his IDF San Francisco keynote on September 13, 2010 to put their bad PR behind them and set the stage for a new positive Intel rally. A huge surprise about Sandy Bridge being ready for Q4 systems this Christmas would definitely bring the house down and have the net abuzz for months.

Otellini stated that they were "accelerating their 32nm ramp up" and now it's up to him to clarify what that statement actually meant. Whether Otellini knocks one out the park this September by delivering the news that we'll see Sandy Bridge systems in the marketplace in time for Christmas or whether the rumor mill has gotten it right all along - is only four weeks away. Yet if the public knows that Sandy Bridge won't roll out in stores like Best Buy until January – who would be dumb enough to buy a computer for this Christmas? And that's the Intel quandary if they miss the all important Christmas season.

For now, the only question remaining for Macites is: Will Steve Jobs be playing Santa or Scrooge this coming Christmas?

As far as shiny new Sandy Bridge based iMacs are concerned, I don't think we'll be hearing ho-ho anytime soon. Then again, I wouldn't mind being wrong on that call - in the least.