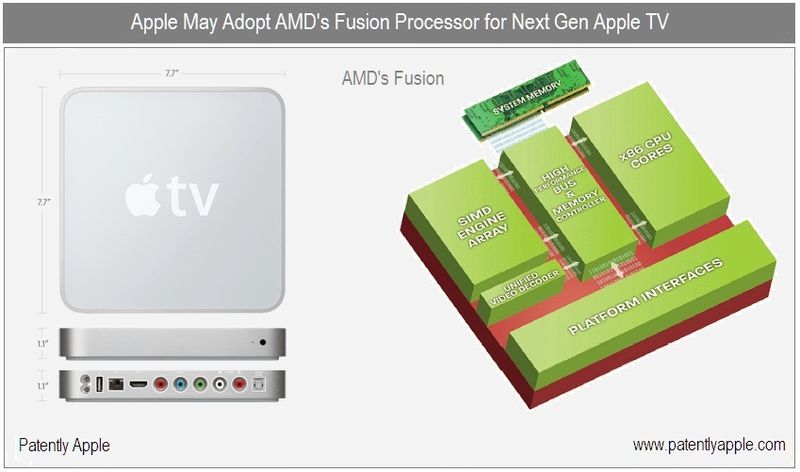 The news out of Taiwan this morning is that Apple will adopt AMD's new Fusion APUs for the next generation of Apple TV. This blockbuster news, if true,  could open the door to other Apple-AMD based products later in 2011. This morning's news also adds some other interesting products due to arrive in early 2011 - such as a new ARM Cortex-A9 based processor for the iPad and a second smaller 7 inch iPad. The news also hits a nerve with the revelation that Apple will redesign their iPhone with a forged metal back plate with integrated antenna to remedy any concerns over the iPhone's antenna reception.

The news this morning is that the next generation of Apple TV will adopt AMD's Fusion APUs and won't include a hard drive. This likely opens the door for Apple TV to move to a cloud based solution; a solution that Apple began to hint at in a published patent last October. 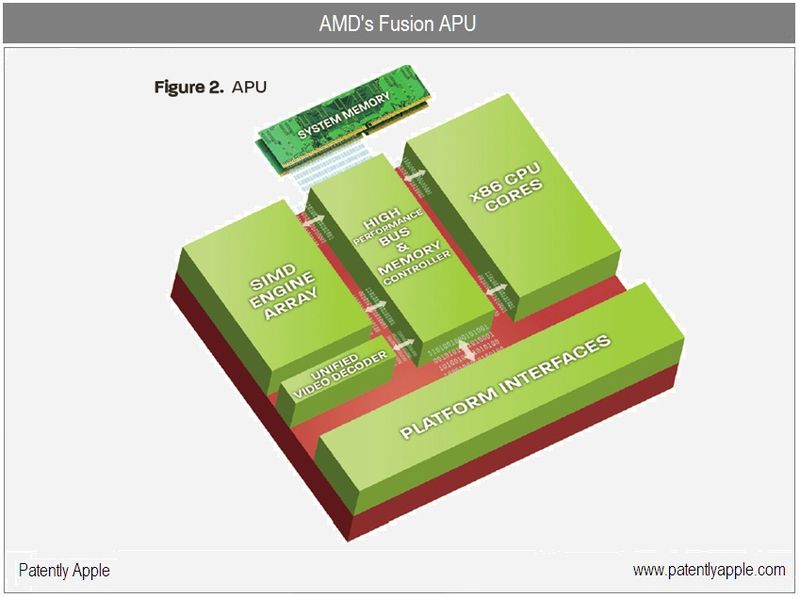 AMD's Fusion introduces us to the APU - which is a next generation CPU + GPU processing unit which stands for "Accelerated Processing Unit." It's the first architecture to adopt and integrate Apple's OpenCL. The news out of Taiwan this morning also predicts that Apple TV will adopt iOS, have an iPhone-like interface and support social networking websites. You'll also be able to access Apple's App Store. In theory, it could open the door for Apple TV to run higher-end video games such as Assassins Creed. Lord knows we're all praying for that day to arrive. 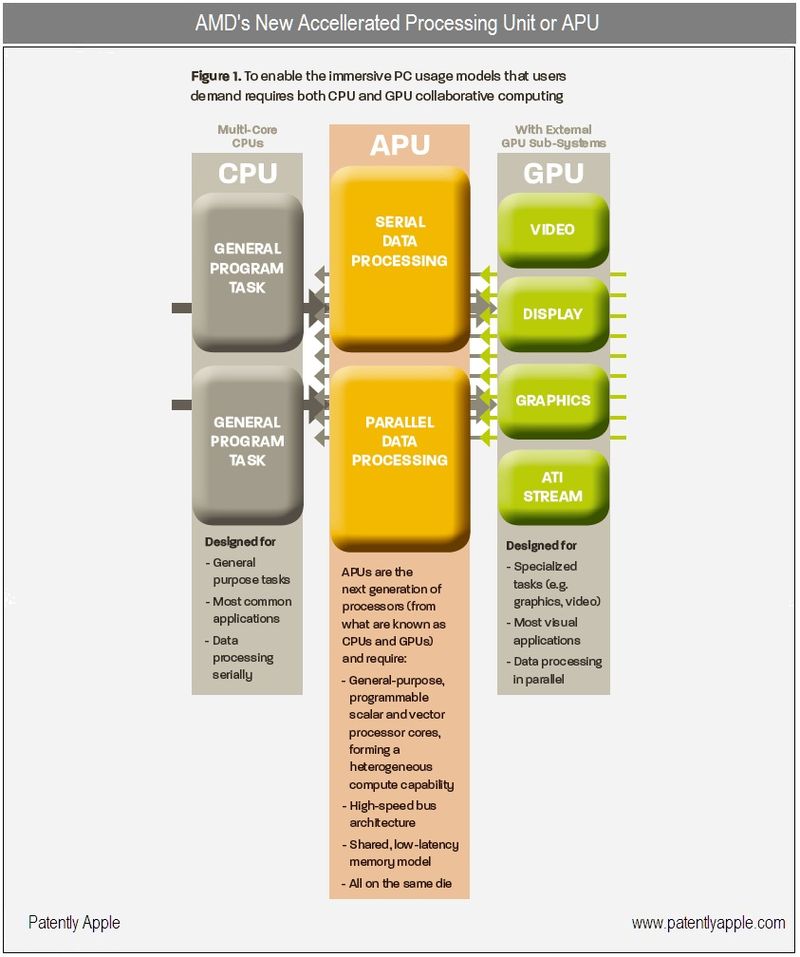 The advantage to AMD Fusion is that it holds tremendous potential for the future of Apple TV. According to AMD literature on Fusion, future features could include the following: Recognizing gestures without a remote, responding to voice commands, supporting bi-directional hi-definition video chat - or in Apple's lingo, "FaceTime"; add stereoscopic 3D realism to 2D content and finally support 3D gaming.  AMD's original presentation for Fusion demonstrated a high-end 3D game playing off the integrated graphics built-into Fusion. So the technology is there to make it happen.

Apple Wastes No Time: New iPhone Design in the Making

The other big news to follow the sudden departure of Apple's iPhone executive Mark Papermaster last week, is that Apple will supposedly switch the iPhone's glass back panel to one that is made of forged metal that includes an integrated antenna. The CDMA iPhone will work on Verizon's network, states DigiTimes, which is supported by a recent report by TechCrunch.

The last segment of the news is that Apple is going to adopt a new ARM Cortex A9 processor in Q1 2011 along with an all new 7 inch model. That supports other news that we reported on last week.

One last note: AMD's literature points to recognizing gestures without a remote and supporting hi-def video chatting. For that to happen, Apple would have to add iSight to Apple TV. Now that would be one hell of an upgrade to knock us silly and perhaps even challenge Microsoft's Kinect. But I wouldn't hold my breath just yet. It's just a theory based on what AMD's Fusion could offer Apple TV sometime in the future.

This morning's news is both invigorating and filled with controversy in respect to the changing antenna design. What are your thoughts on this development if it proves to be true - and more importantly, do you think that higher-end gaming is a realistic possibility for Apple TV in 2011?

Taiwan news source: DigiTimes. Note that links to the DigiTimes report will only stay open to the general public for about a week, so this link has a limited life span.

Apple News Update: Liquidmetal Technologies, Inc., has entered into a Master Transaction Agreement with Apple Inc. The deal was finalized on August 5, 2010. See our special report that covered liquid metal back on June 12, 2010.

I doubt that Apple will go from zero to a hundred miles an hour with AMD in one shot, if they have a choice in the matter that is. AMD will be discussing Bulldozer at Standford later this month and it should be interesting.

Yet the idea of easing AMD's Fusion into Apple TV, in the relative short term, does make sense if Apple feels that Intel will become more of competitor than a partner with their MeeGo mobile project with Nokia.

It's all speculation at this point anyways, but it sounds more than feasible that Apple, under Steve Jobs, would want to test out AMD first on something that's not important to their bottom line.

I see the A5 with the ARM Cortex A9 and up to 4 cores and massively conservative power options in there, along with their extended IP access to imagination technologies.

Choosing form over function is classic Jobs. Papermaster is just a convenient diversion.

I'm an Apple customer and one consumer who believes that eventually, Apple will probably have to produce a 7-inch, iOS tablet.

Besides being the size of paperback books, this is the standard LCD screen size used for Double-DIN (7" x 4" -- 180 x 100 mm) media-playing 'head units' (car radios) in vehicles that play DVD movies (ISO 7736). Single-DIN head units are 180 x 50 mm (2" x 7") and use smaller, two or three line video displays. Unfortunately, the DIN standard doen't define a depth, and occasionally, people do run into problems when trying to install modern head units in older vehicles that have shallow dashboards.

In the spring of 2009, Pioneer and Alpine finally delivered the first of a new generation of vehicle head units that sport a new "Works with iPhone" logo sanctioned by Apple (it closely resembles the "Made for iPod logo previously in use). They connect to car speakers systems and some include built-in Bluetooth, navigation and even Pandora radio compatibility. these in-dash replacements that bring iOS hardware and software compatibility can cost between $250 and $1,600.

The newest vehicle head units have USB ports and built-in or stand-alone Bluetooth v2.1 or later (by Parrott). They will charge Apple's handheld devices, play music or videos, and even sync the iPhone/iPod Touch Contacts (address book) to the head unit's Bluetooth module to display call info on their own displays. Of course, iPod music plays through the vehicle's audio sound system and even fades down when an incoming call is detected. Also, videos play on the larger head unit's LCD displays. Pioneer's 2009 model even offered a second USB jack for the passenger's iPod. However, there are problems. For instance, the 2009 transitional head units only synced the first 400 contacts (with four numbers each), though one newer Pioneer (P710BT) synced the first 1000 contacts. 2010 units resolved this problem, but various issues with the iPhone 4 have arisen.

Unfortunately, when new iPods and iPhones are released each year, consumers have to wait month before head unit manufacturers can update existing products to eliminate incompatibilities that arise. It is a very big headache for consumers, as is finding wiring harnesses and dashboard mounting systems for their iOS devices, which vary be device and vehicle.

Executives at auto head unit manufacturers like Pioneer, Alpine, Clarion, Delphi, etc., should be watching for Apple in the rear-view mirror. A line of branded, in-dash vehicle head unit docks for 4.5 and 7-inch iOS devices is a rather obvious market that Apple eventually must enter.

I believe the 7" screen everyone is talking about is for a gaming iPod touch.
Anyone Else?

No controversy. Is that why Papermaster is history? Dream on.

Apple users demand the best. And Apple will keep creating new antenna designs to get the best reception. Period.

Every generation of iPhone is better than the previous generation. Thus there is no controversy.

Yeah for AMD! Real video games in our living room on an Apple TV would be drop dead stunning. Apple needs something to spark life into Apple TV and shifting some focus to online gaming is exactly what they need to reboot Apple TV.

No wonder Papermaster left or was fired. If plan B is already being rumored, it's likely a done deal.

High end 3d games on Apple TV is my dream. I'd rather have an Apple solution than using OnLive or other third party. Apple, make it happen please ;-)

Before the 7 inch iPad could come out, display supply problems have to be sorted out.