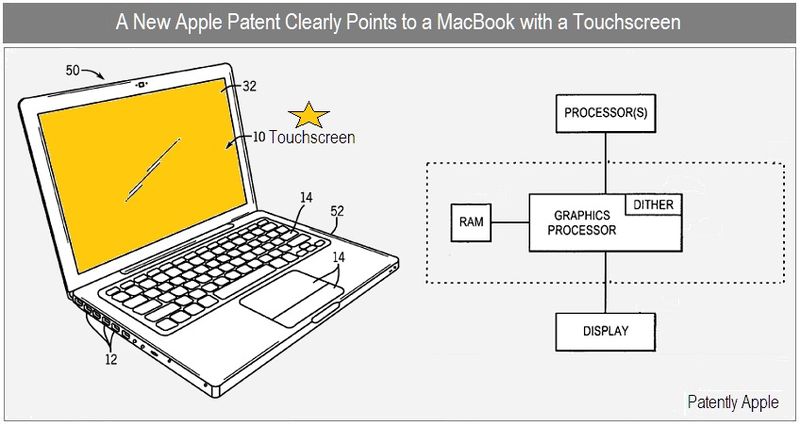 On July 19, 2010, the US Patent & Trademark Office published a series of ten meticulously detailed Apple patent applications covering the technology behind Apple's high-resolution LED-backlit IPS displays. These high-end displays could be found on today's iPad, iPhone 4 and even on the latest upgraded iMacs. According to Apple's newly published patents, it appears that Apple's MacBook line-up is destined to gain these incredible displays as well – even though they already possess a pristine LED-backlit display with wide-angle viewing, today. Yet the big news buried deep within all ten of this week's display-centric patents is a clear-cut fact that the MacBook is destined to also gain a multi-touch display. There's no wishy-washy lingo about it and today's report will show you the details.

Apple's patents generally relate to electrodes used in displays, such as liquid crystal displays. One of the applications within these patents relate to increasing light transmittance in LCD pixels. More importantly, one of the prime target products for such a new display is a touchscreen based MacBook as shown below in patent FIG.3. Later in the patent under patent point 46, Apple clarifies that FIG. 3 could be a MacBook, MacBook Pro and/or MacBook Air. The display #10 in FIG. 3 may be an LCD employing fringe field switching (FFS), in-plane switching (IPS), or other techniques useful in operating such LCD devices.

Apple has clearly chosen to utilize IPS display technology in their current iPad and iPhone 4 portables – and has now extended IPS through to their latest iMac lineup. IPS is likely to therefore extend on through to the iPod touch and MacBook as this patent suggests. The twist is adding a touch screen. The patent states that "…display 10 may be provided in conjunction with a touch-sensitive element, such as a touch screen, that may be used as part of the control interface for the device 8." 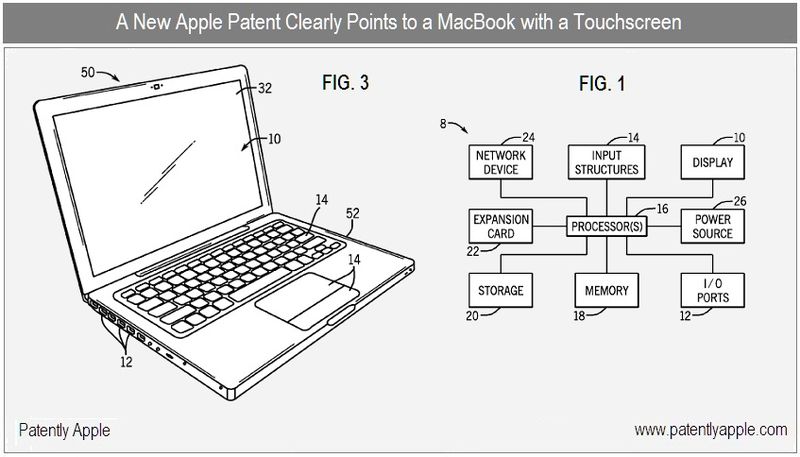 The patent reaffirms the touchscreen MacBook concept in patent point #32: "In certain embodiments, an input structure 14 and display 10 may be provided together, such an in the case of a touchscreen where a touch sensitive mechanism is provided in conjunction with the display 10. In such embodiments, the user may select or interact with displayed interface elements via the touch sensitive mechanism. In this way, the displayed interface may provide interactive functionality, allowing a user to navigate the displayed interface by touching the display 10." I don't think it's going to get any clearer than that folks. The only thing that we don't know yet of course, is the timing of this to market. That'll remain an Apple secret until the last possible moment, no doubt (Rats!).

Apple's patent FIG. 1 noted above is a block diagram illustrating the components that may be present in a MacBook and/or iPhone which are the two visual examples provided for in the report. It should be noted that Apple's patent claim #9 and patent point #5 states that the technology could also apply to other devices including a television and gaming system.

In respect to the iMac, Apple's July 27, 2010 press release stated that "iMac displays feature IPS technology to deliver a brilliant image across a wide 178 degree viewing angle." It should be noted that two out of the ten new display patents that surfaced on Thursday (20100207862 and 20100207857) covered LCD viewing angle technology specifically. The technologies that were presented in those patents, covered display properties such as viewing angle, color shift, and transmittance – which are generally improved relative to those exhibited by conventional multi-domain designs.

Apple's patent FIG. 4 shown below depicts an exploded view of different layers of a pixel of an LCD. The pixel 60 includes an upper polarizing layer 64 and a lower polarizing layer 66 that polarize light emitted by a backlight assembly 68 or light-reflective surface. A lower substrate 70 is disposed above the polarizing layer 66 and is generally formed from a light-transparent material, such as glass, quartz, and/or plastic.

Apple's patent FIG. 5 shown above is an example of a circuit view of pixel driving circuitry found in an LCD. For those of you who are interested in the finer details of this technology, check out patent points 51 through to 73. Yet to be honest, you'd actually have to review all ten of Apple's patents presented to you below to appreciate the depth of detail behind the technology that powers the display magic found in Apple's new iPad, iPhone 4 and iMacs.

At the end of the day, Apple's patent leaves us wondering. Is the patent literal in that we'll see a MacBook with a touchscreen or was the patent forecasting the iPad? The date of the filing being eleven months prior to the iPad's debut may answer this patent - or Apple may still be confirming that the MacBook family of products will eventually come with a standard touchscreen.  How do you see it? 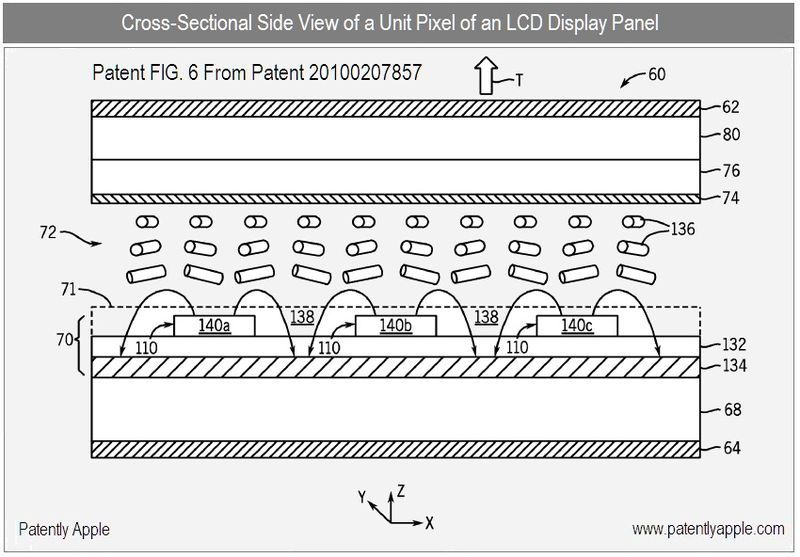 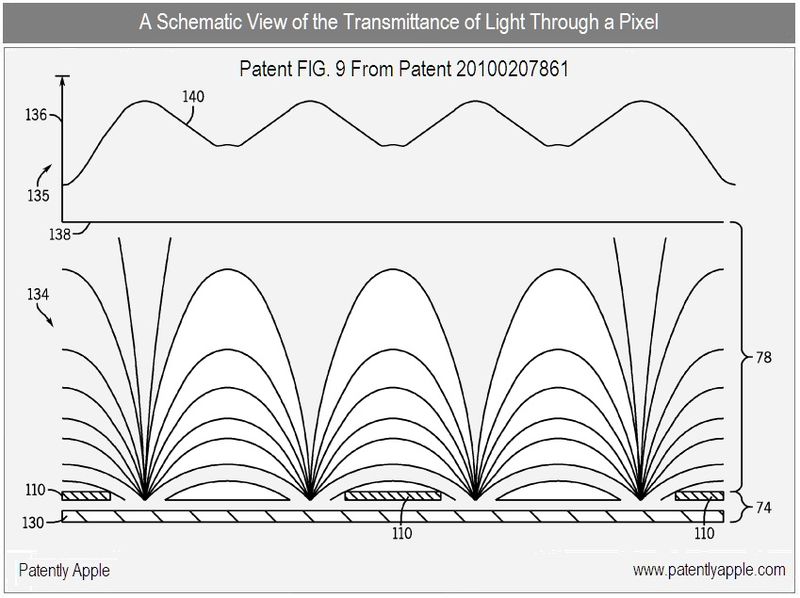 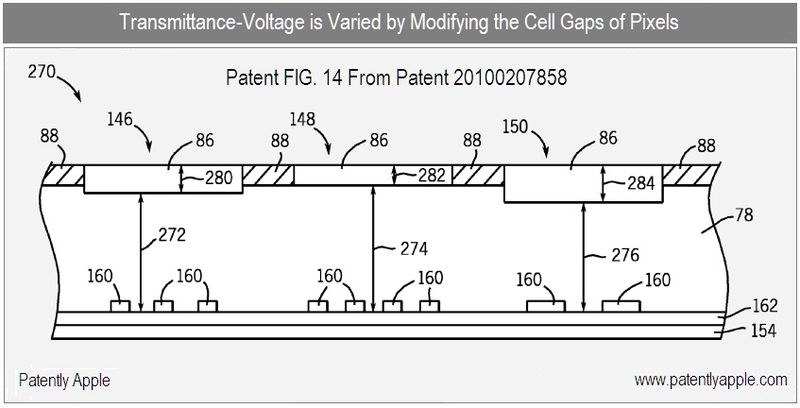 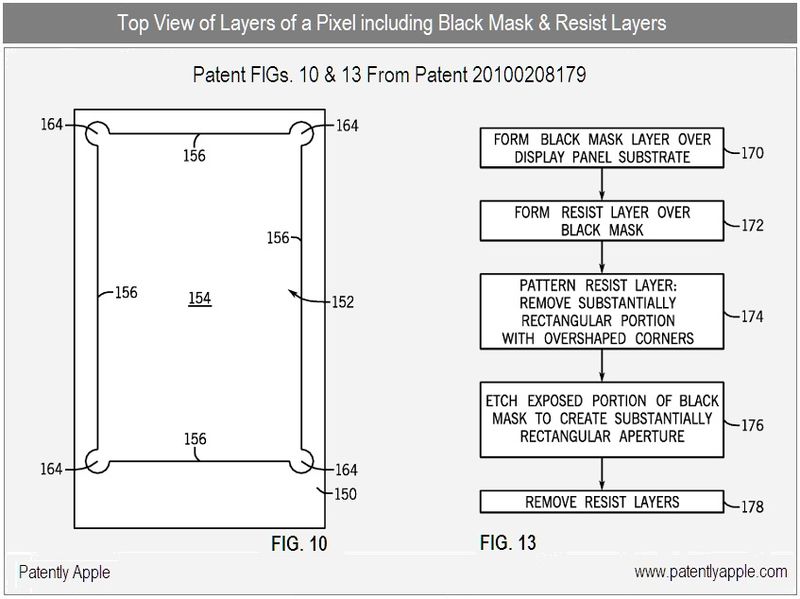 The Abstracts to all 10 LCD IPS Display Patent Applications

Patent 20100207858 LCD Pixel Design Varying by Color: A liquid crystal display (LCD) having a plurality of pixels is provided. In one embodiment, the pixels of the LCD each include common and pixel electrodes formed on an insulating layer, and a liquid crystal layer responsive to electric fields generated by the electrodes. The plurality of pixels may include two or more sets of pixels each configured to transmit light of a different color, and the pixel electrodes of one set of pixels may be configured differently from those of another set. In other embodiments, the sizes of the pixels may differ. Various additional devices and methods are also provided.

Patent 20100207857 Undulating Electrodes for Improved Viewing Angle and Color Shift: The present disclosure generally provides for a variety of multi-domain pixel configurations that may be implemented in the unit pixels of an LCD display device, such as a fringe field switching LCD display panel. An LCD display device utilizing one or more of the presently disclosed techniques disclosed herein may exhibit improved display properties, such as viewing angle, color shift, and transmittance properties, relative to those exhibited by conventional multi-domain designs.

Patent 20100207862 Pseudo Multi-Domain Design for Improved Viewing Angle and Color Shift: Aspects of the present disclosure relate to single-domain electrode configurations that may be implemented in the unit pixels of a LCD device, such as a fringe field switching (FFS) LCD, to provide a "pseudo-multi-domain" effect, wherein the benefits of both conventional single-domain and multi-domain pixel configuration devices are retained. In accordance with aspects of the present technique, single-domain unit pixels are angled or tilted in differing directions with respect to a vertical axis of the LCD panel (e.g., y-axis) to provide an alternating and/or periodic arrangement of different-angled pixel electrodes along each scanning line, data line, or a combination of both scanning and data lines. In this manner, the transmittance rates of conventional single-domain LCD panels may be retained while providing for improved viewing angle and color shift properties typical of conventional multi-domain LCD panels.

Patent 20100207861 Advanced Pixel Design for Optimized Driving: Systems, devices, and methods for reducing common voltage loading and/or enabling a simplified manner of polarity inversion in liquid crystal display (LCD) devices are provided. In accordance with one embodiment, a device may include a processor, a memory device, and a liquid crystal display having a pixel array including rows and columns of pixels. The pixels of each row of the pixel array may be configured to cause an approximately even amount of common voltage loading to be shared between one of a first plurality of common electrodes and one of a second plurality of common electrodes when the pixels of each row of the pixel array receive a scanning signal and a data signal.

Patent 20100207959 LCD Temporal and Spatial Dithering: Apple's patent is about a method and system for temporal dithering of pixels in a display. The dithering of the pixels may allow for simulation of 8-bit color from a 6-bit display. Moreover, the dithering of the pixels may be selected to follow a specific pattern to minimize display artifacts, which might otherwise result from interference generated by pixel inversion techniques performed during the pixel dithering. Through application of selective dithering techniques, including utilization of specific dithering patterns, the generation of display artifacts via interference from pixel inversion techniques during the display of an image may be minimized.

Patent 20100207860 Via Design for use in Displays: A liquid crystal display (LCD) is provided having transistors disposed within via holes having elongated (e.g., rectangular or oval) contact areas. The use of via holes having elongated contact areas allows an opaque mask defining an aperture for light transmission to be lengthened, thereby increasing the overall area of the aperture. The increase in the area of the aperture may increase the amount of light that can pass through the aperture.

Apple May Introduce a New Design Concept for the MacBook Air

as opposed to usual 6-bit displays in laptops?

While the patent mentions a few devices, the fact that they list the three levels of MacBooks extensively is clear like you said. So my vote is that Apple will bring touch to the Macbook but not necessarily this year. It could be 2 or 3 years down the road. Who's in any hurry here?

That's a tricky question. I think that the date is interesting, but I want a hybrid notebook/ipad to cut down on the clutter of devices. That combo would serve me better, but not so for others. But the MacBook Air is really devoid of purpose in the MacBook lineup any longer and so it's the perfect candidate.

They should create a detachable display so it could be used as an iPad too. To justify the cost, it would have to be a macbook air. Give me that and I'll lick it too!