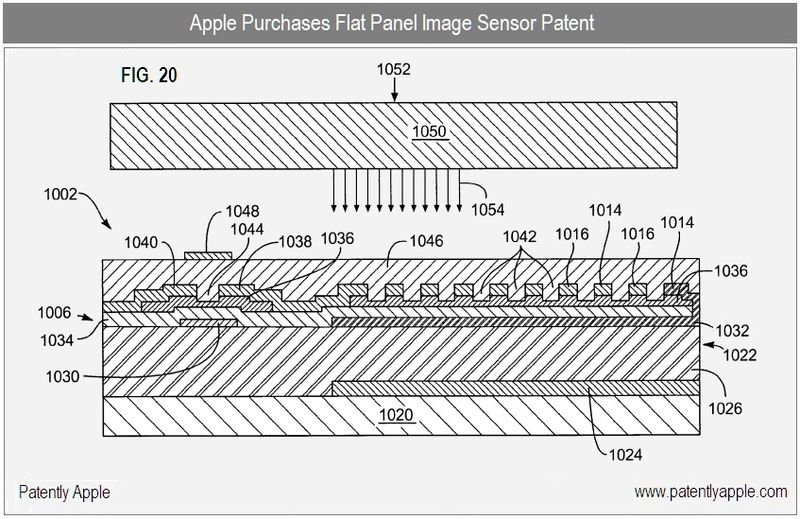 We first introduced you to the Telephonic MacBook this morning and now we're presenting you with somewhat of an adjunct to that report. If you would have blinked yesterday, you could have easily passed over one of Apple's secretive little patent gems. Apparently Apple has purchased a patent from three Oregon based engineers that specifically relates to flat panel image sensor technology. The vast majority of Apple's new patent relates to technology in relationship to next generation x-ray applications. However, there's one application that Apple could be thinking of for this technology and that's Fingerprint Scanning. The patent points to this application in passing - but may in fact be one of the new technologies that Apple could be bringing to their multi-touch display portables sometime in the future. As a security feature, I think it's great. But it's still a technology that creeps me out and I don't think I'm alone on that one.

Flat panel image sensors are commercially successful products that are able to effectively detect electromagnetic radiation in and near the visible light spectrum. Flat panel image sensors are fabricated by depositing and patterning various metals, insulators, and semiconductors on glass substrates as is done in flat panel displays. Such sensors commonly employ photosensitive elements, such as amorphous silicon (a-Si) PIN diodes. The photosensitive element is coupled to a readout switch, such as thin film transistor (TFT) that provides data indicative of received light.

A common use for flat panel image sensors is for medical and industrial applications to detect x-rays. The image sensor includes a phosphorescent screen that overlays an array of image sensing elements. The phosphorescent screen converts received x-rays to visible light. The array receives the visible light and generates a photocurrent responsive to the light. The photocurrent is read out as data indicative of the sensed light.

Conventional image sensing applications have not considered the use of TFTs to detect relatively weak x-ray emissions. In order to detect x-ray emissions, the sensitivity of the imaging sensing TFT is a primary concern. Conventional devices are unable to provide adequate light detection for x-ray applications. Transparent pixels, in particular, do not provide sufficient sensor element density to detect light resulting from x-ray emissions. Thus, it would be an advancement in the art to provide a TFT image sensor with enhanced light detection capability and suitable for x-ray applications. Such a device is disclosed in this patent.

An image sensor array includes photo sensors disposed on a substrate and arranged to receive and sense an image. Each photo sensor represents a pixel for a received image. The photo sensors each include a photo TFT that generates a photocurrent in response to the image. The photo TFT may be manufactured using common processes for TFTs in flat panel applications. The photo TFT has a gate electrode which is shorted to its source electrode to obtain a photocurrent that is substantially independent of source-drain bias. The photo TFT may also be configured with interdigitated source and drain electrodes to increase the photosensitivity. Each photo TFT is coupled to a bias line to enable operation and a storage capacitor to store a charge and discharge upon generation of a photocurrent.

In an alternative embodiment, a photo TFT has its source electrode and gate electrode coupled to independent bias lines to reduce the effect of dark current. The corresponding storage capacitor is coupled to the source and drain electrodes.

The photo TFTs can provide an effective and economical alternative to conventional photodiodes. Photo TFTs may be manufactured concurrently with the manufacture of corresponding readout TFTs using conventional methods, thereby reducing mask counts and costs. Photo TFTs may further yield photocurrents greater than that of photodiodes. Furthermore, photo TFTs have a lower fill factor and provide less spillover to adjacent pixels.

The three Oregon based engineers that invented this process are Willem den Boer, Tin Nguyen and Patrick Green. The granted patent is number 7,773,139. Patent FIG. 20 presented as our cover graphic is a cross-sectional view of an embodiment of a sensor element.

Note: If you're an expert on flat panel based image sensors, then please take a moment to present your suggestions as to how Apple could utilize this further, in our comments section below. Thank you.

When working at Apple we talked about screens that could scan images. This might finally be the patent!