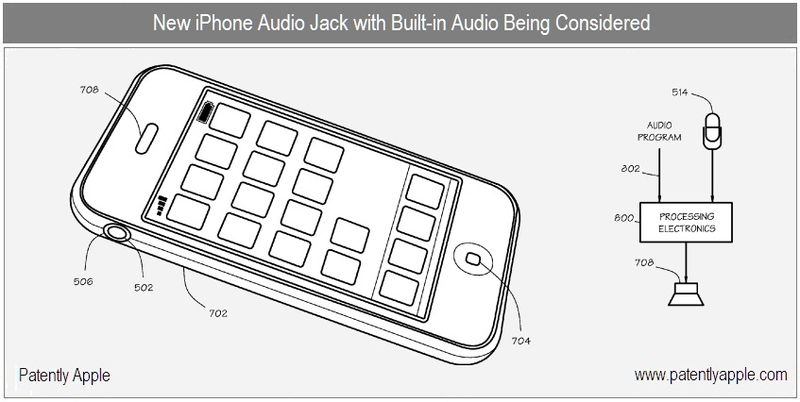 One of Apple's new patent applications published yesterday describes a possible future iPhone audio Jack with built-in mic combination so as to save space should Apple decide to add new ports or future features.

Accordingly, there is a need to minimize the requirement for openings in the housing of a handheld device to accommodate microphones and electrical connectors.

Apple's patent FIG. 5 shown below is a pictorial view and FIG. 6 is a plan view of another connector 506 that embodies the invention. The new connector would include a body 500 (of FIG.5), the upper portion of which is not shown to allow the invention to be seen more clearly. The body defines an aperture 502 and a cavity 504 for receiving the cylindrical plug. The aperture is defined in an end face of the body 500, and the microphone 514 is supported by a side face of the body that is adjacent the end face. While the microphone is illustrated as being supported in the bottom face, which would be against a supporting circuit board. The microphone technically could be positioned elsewhere in the design. 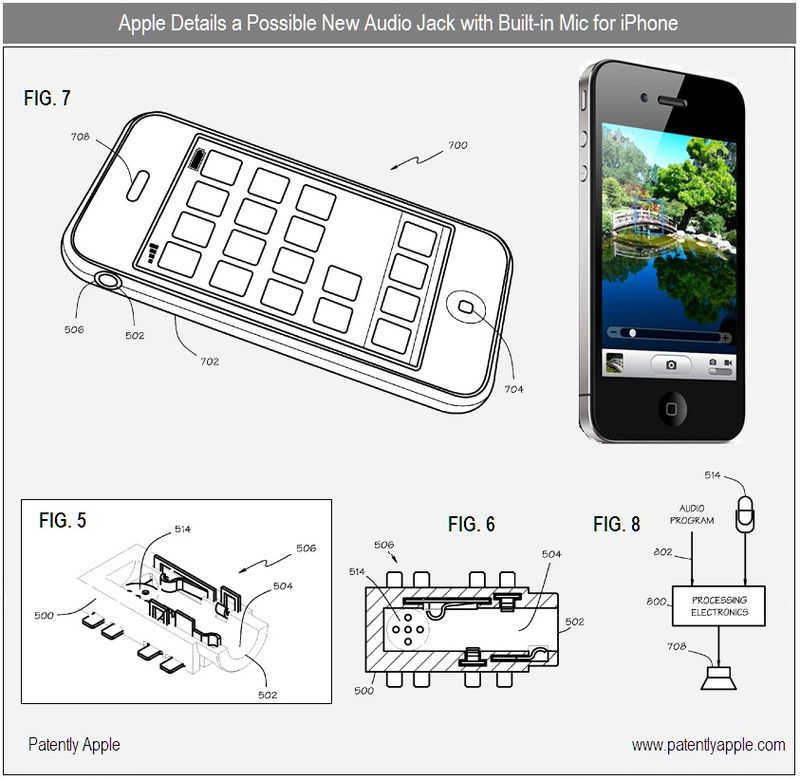 Apple's patent FIG. 7 confirms that the new audio Jack with built-in Mic is being aimed at the iPhone, though the design could later be incorporated into other iOS devices if not the MacBook etc. The electrical connector 506 may provide connectivity for an external device such as an earphone, an external microphone, or a power supply. Apple's FIG. 8 is a block diagram of processing electronics 800 that may be used for noise cancellation. The new design's audio Jack positioning differs from the iPhone 4's which we've juxtaposed in the graphic above for the sake of visual comparison.

A variety of audio enhancements may be performed using two microphones such as audio, noise suppression, noise cancellation, echo cancellation, sound source localization and beamforming which is a form of smart antenna. Audio beamforming may use the audio input of the two microphones to provide an amiable directional input, which is advantageous for the iPhone when used as a speakerphone or recording device for a sound source at some distance from the iPhone – such as when using the iPhone in video camera mode.

Some features in this patent have already made their way to the iPhone 4, such as dual microphones and noise cancellation. The first mic is for phone calls, voice commands and memos. The second mic is for FaceTime calls and for making your calls better.

Surely they must be incorporating a form of MagSafe into their re-design of this socket?