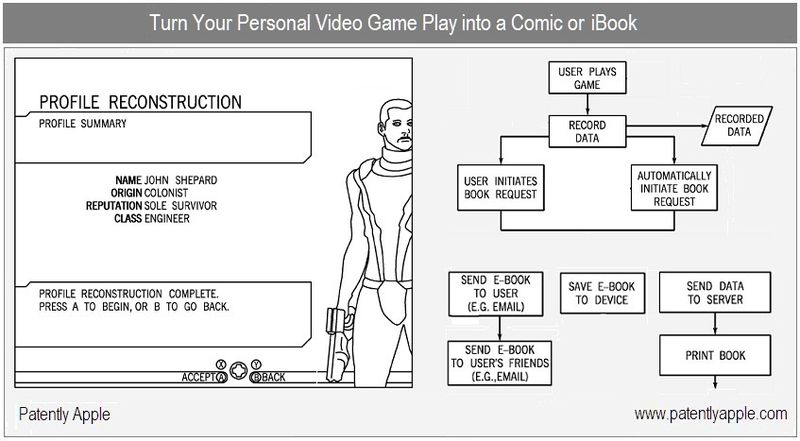 On Monday we read about the possibility of Apple choosing AMD's Fusion Processor for Apple TV to boost gaming. Today we've learnt from a new Apple patent that a wild new application could be in development that would record your personal journey through a video game like Mass Effect and then give you the option of turning it into a custom comic or ibook when you're done playing. What a phenomenal idea. Video games like Mass Effect not only allow you to customize the appearance of the characters that you'll be playing, they also allow you to choose which direction the story line could actually play out by choosing different dialog options. The possibilities are almost endless in how the game's ending could play out. Instead of just discussing how your version of a game played out with a friend, you could now show them with your very own customized comic. Now how cool is that? Our report today takes you through some of the mechanics of how this magic is actually accomplished - in addition to providing you with various screenshots of the Mass Effect video game as they pertain to this patent. At the end of the day, I see a possible new iLife app in the making here that could be associated with with a new online Apple-centric comic book store print service. This could be a lot of fun for die-hard gamers!

Videogames may be played on devices such as computers, game consoles and portables such as phones, PDA's, portable media players, handheld videogame devices, etc. During play of videogames, a user interacts with the electronic device by using input devices to respond to the game, such as by solving puzzles, making choices, and executing hand-eye coordination movements in response to the displayed videogame images.

Many videogames allow customization of the user's representation of a game character in a videogame. Further, the videogames often offer the user a variety of choices that determine a course of action, e.g., multiple ways to solve a puzzle, multiple dialogue choices to interact with a non-player character in a role playing videogame. In many games, the user's character and choices are integrated into a story. The story may or may not be responsive to the user's character and choices. Typically, the user's position in the game (or place in the story) is recorded automatically or manually though the use of recorded data in the form of a "game save." However, after completion of the videogame, the user's interaction with the game (and any story presented in the game) is complete. Further, the user may be unable to directly access the saved game file to view any data recorded throughout the game. Even if the user is able to access the saved game file, the recorded data may be difficult to relate to the game and/or the story, and may be recorded in a format unrecognizable to the user.

The types of video gaming systems that could be used in Apple's new system may include any Mac running OS X or any Windows System using Windows Vista or Windows 7. 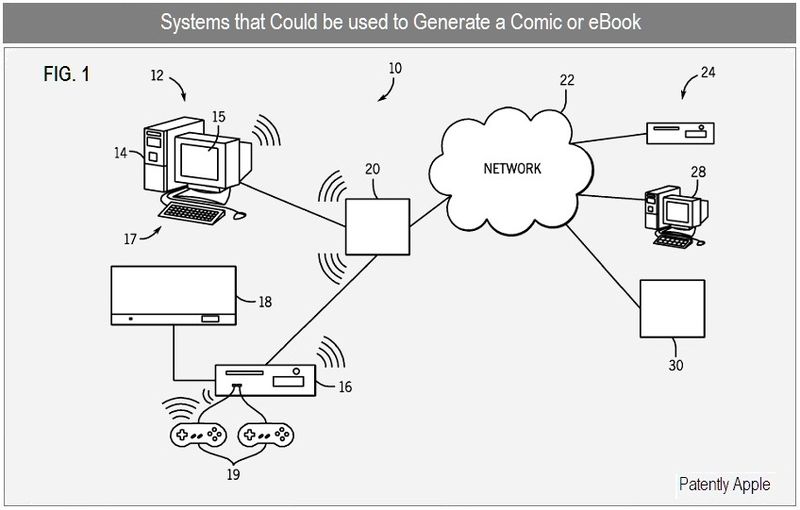 Furthermore, the system may also include a gaming console (#16) hooked to a display or HDTV. The consoles are specifically clarified as being any Playstation from Sony, any Xbox from Microsoft, the Nintendo Gamecube or Wii. The patent already acknowledges "motion-activated" controllers. The patent also points to the iPod, iPhone and other portable systems such as the Nintendo DS, Game Boy, and Playstation Portable.

Interestingly Apple also states that a console could also mean a DVR, DVD player, a cable converter box, a satellite receiver and streaming video player. To clarify oddities in FIG. 1, #20 is noted as being a networking interface to enable communication to and from a network 22. #30 is a server coupled to the network so as to receive software updates, video game data etc. 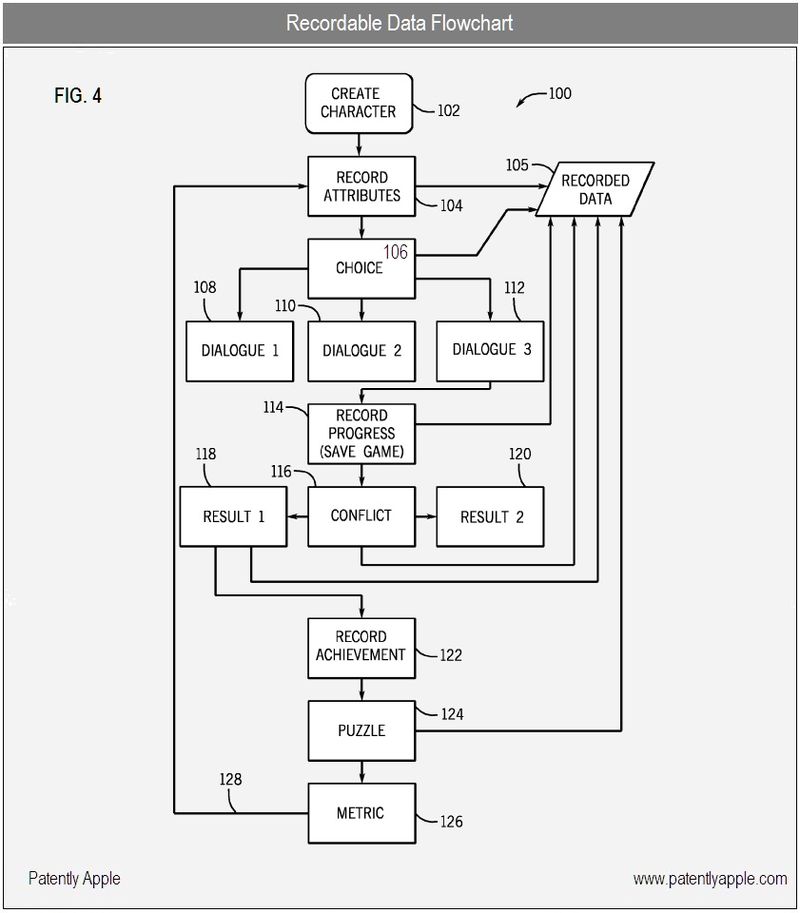 Flowchart of the Interaction between a videogame and Recorded Data 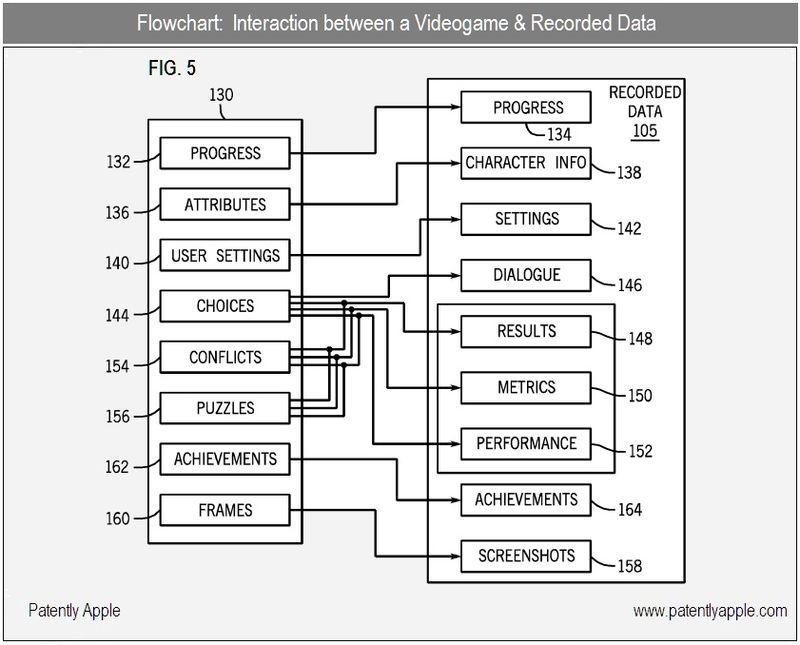 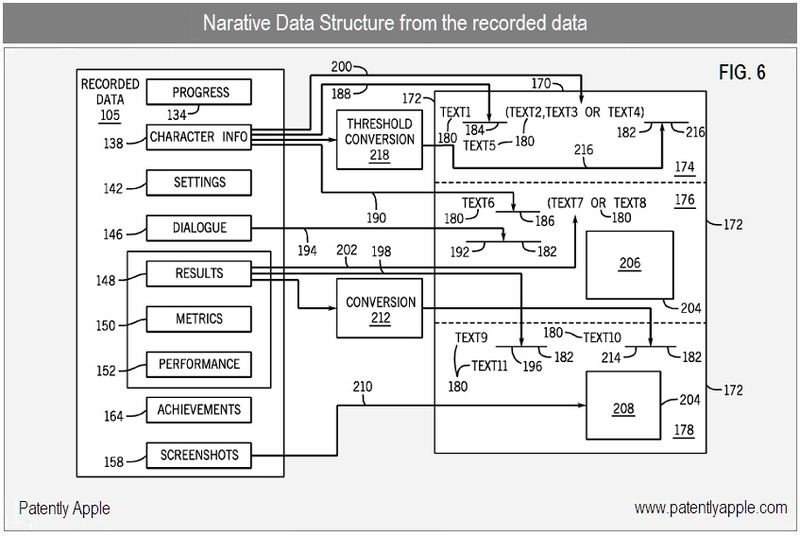 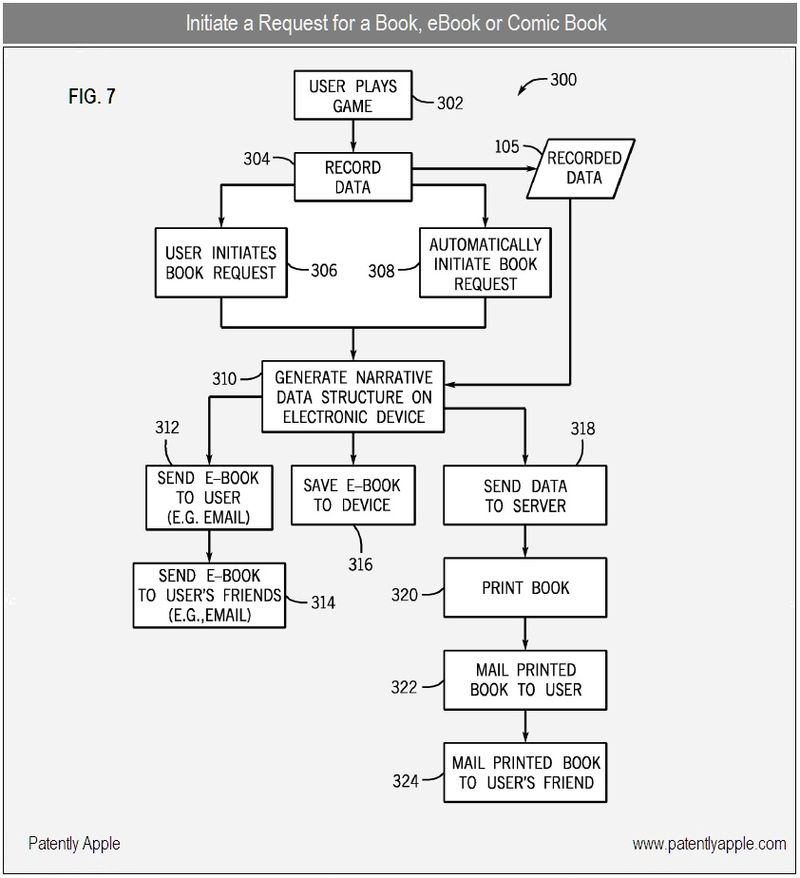 In some embodiments, a book, comic book, or any other publication may be created from the generated narrative data structure. The Mac may also send other information about the user to the server, such as the user's identify, billing information, shipping information, etc. The server may have the capability to print the book (block 320) or cause the book to be printed from a printing location. After printing, the book may be mailed to the user (block 322) and/or the user's friends (block 324). This service may be offered to a user of a Mac as a free, pay-as-you-go or as a subscription service.

Apple's patent FIG. 8 depicts a process 400 for generating the narrative data structure from the recorded data at a remote location. 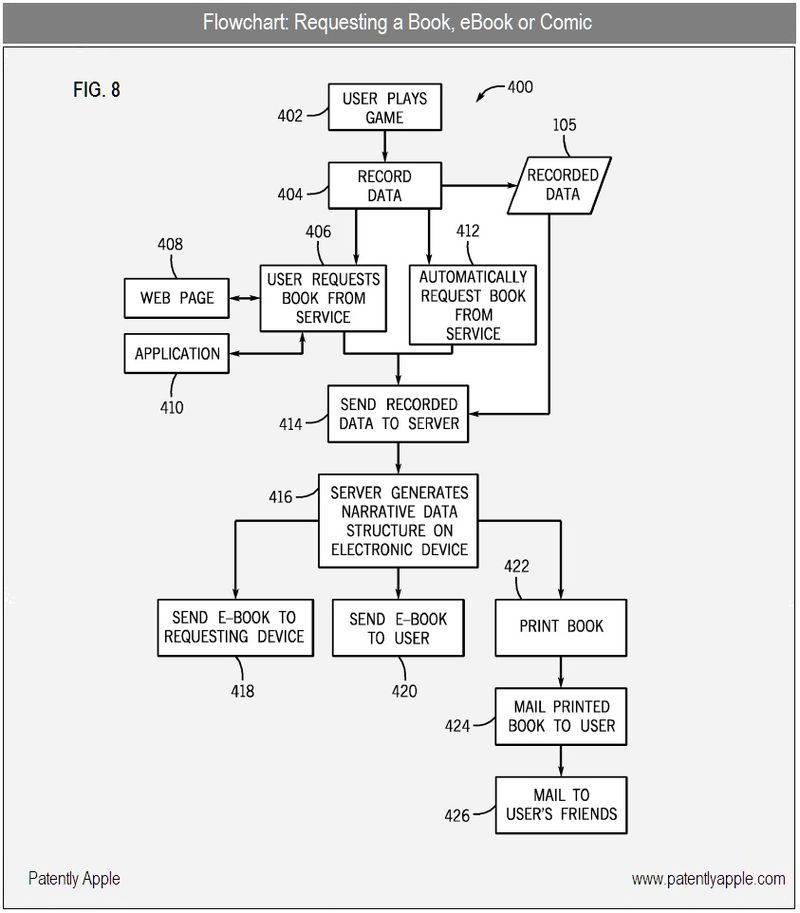 In some embodiments, the server may send an electronic copy of the book (e.g., an e-book) back to the Mac that sent the recorded data (block 418). After receiving the e-book, the Mac may then send the book to a user, save the book, etc.

From the Video Game Mass Effect: A Glimpse of what the Comic Book Could Contain

Apple's patent Figures 9A through 9G depict screenshots of the popular video game Mass Effect gameplay session which illustrates the data that could be recorded and inserted into the narrative data structure for generation into a book, e-book, or comic book. 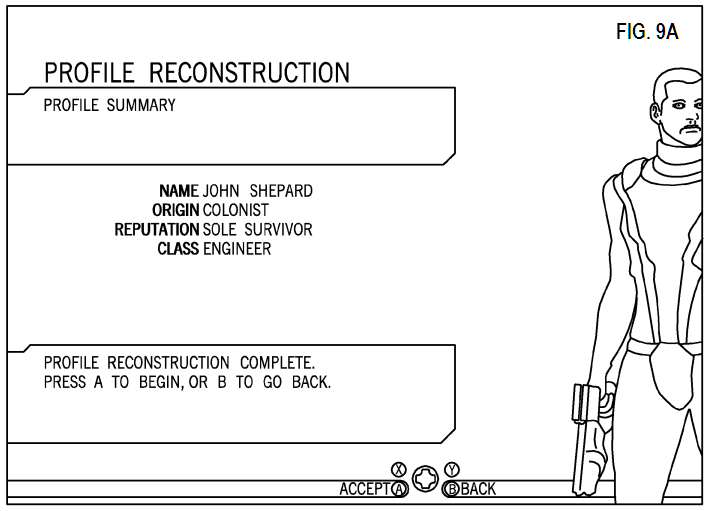 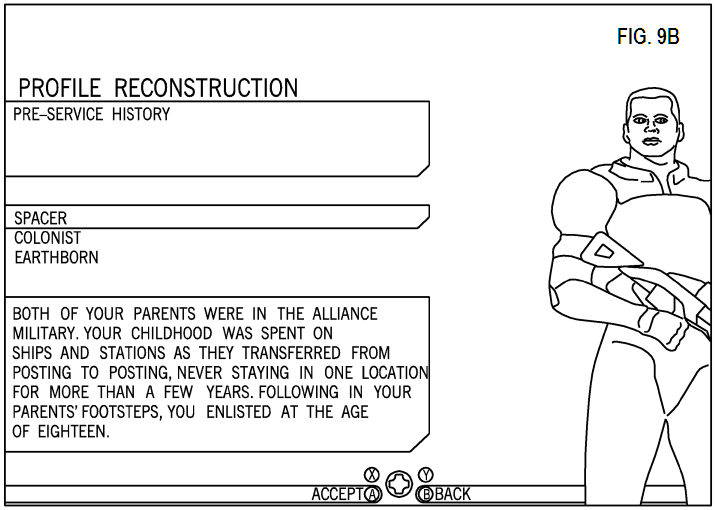 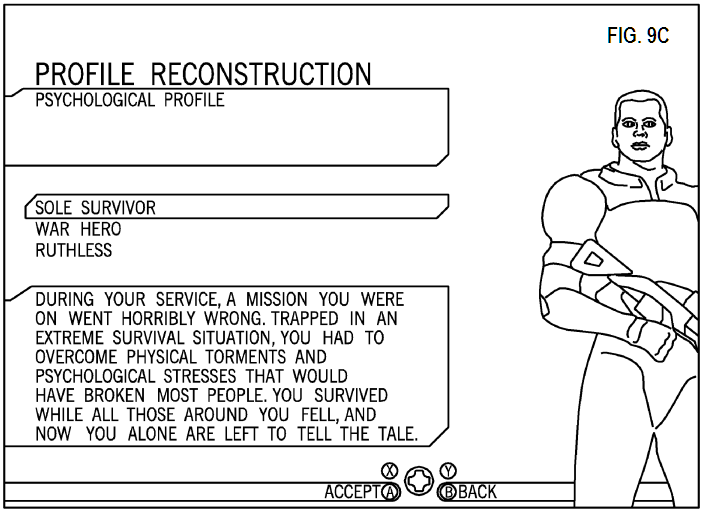 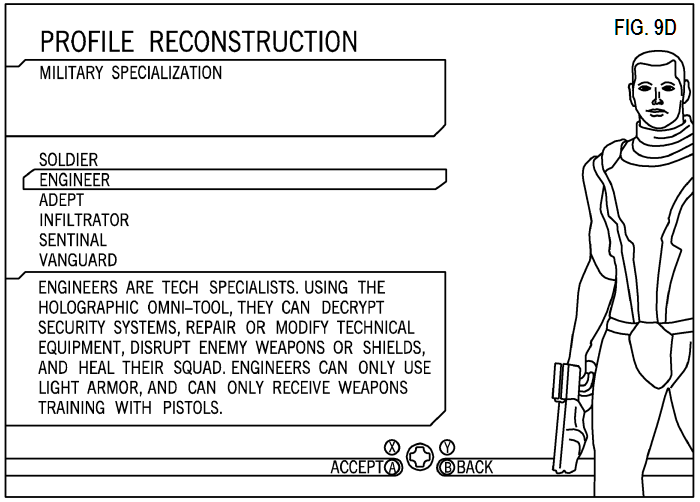 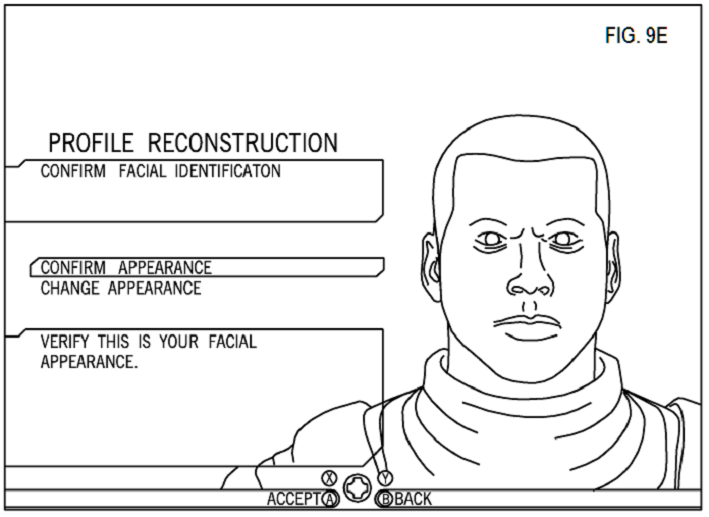 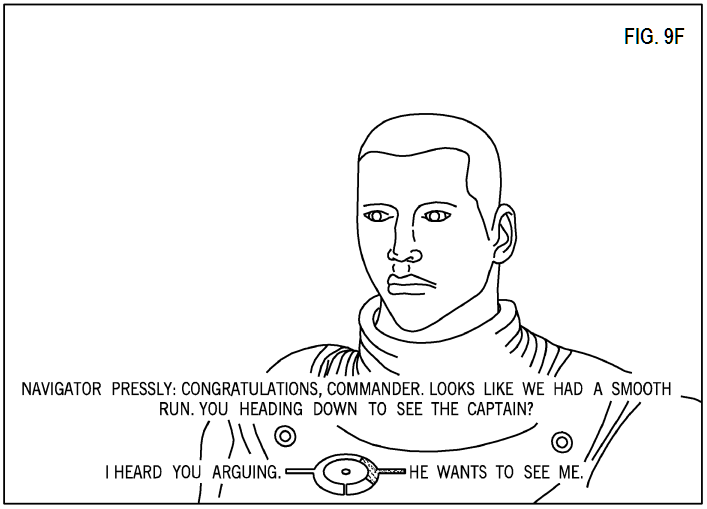 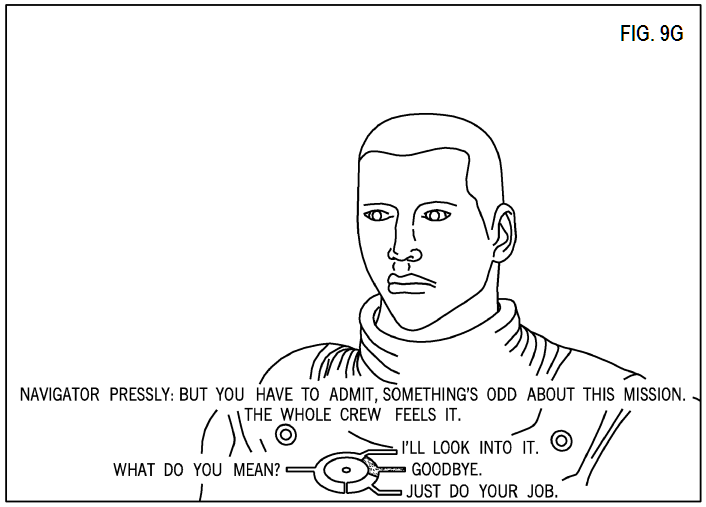 Update: Apple's patent FIG. 9G is a key figure in respect to the appeal of Mass Effect in concert with this patent. The character in this figure is Captain John Shepard. One of the key attributes of this type of role playing game is that the captain is asked many questions throughout the game and depending on his answers and/or actions, the game could take on a different direction. It could be accepting new crew members to taking new side missions or building strategic relationships. With so many characters and side missions to choose from throughout the game, the odds of your experience with the game being different from another players experience is pretty high. This is why giving the user the option to create a custom comic book that reflects the decisions that they've made throughout the game is so unique and personal. It also doubles as a great memento and/or souvenir for that particular game.

Now - Is that cool or what? And how cool will it be to show off your Custom Comics on your new iPad? Very!

About other patents today: There were six continuation patents today dating back to 2004 which aren't worth covering. The only other patent today of mild interest dealt with GPS. It's an in-depth patent that is likely to put you to sleep unless this is your particular field of interest. One little twist states that one of the GPS data formats is from the National Marine Electronics Association (NMEA). I'm not sure that's available today or not on an iPhone. If it's something coming, that could be of interest for the many among us who are avid sailors. GPS for marine applications have to be deadly accurate. It's not like pointing to a clear cut intersection of a city. In the middle of the ocean, your GPS better be bang on if you're in trouble. Check out patent 20100201567 if you're interested by placing that patent number into this search engine.

Note: When the patent was filed, Apple's engineers used the term e-book or ebook. In light of the iPad and the iBook App, interpret references to an e-book as equating to iBook.

How cool. I love this.