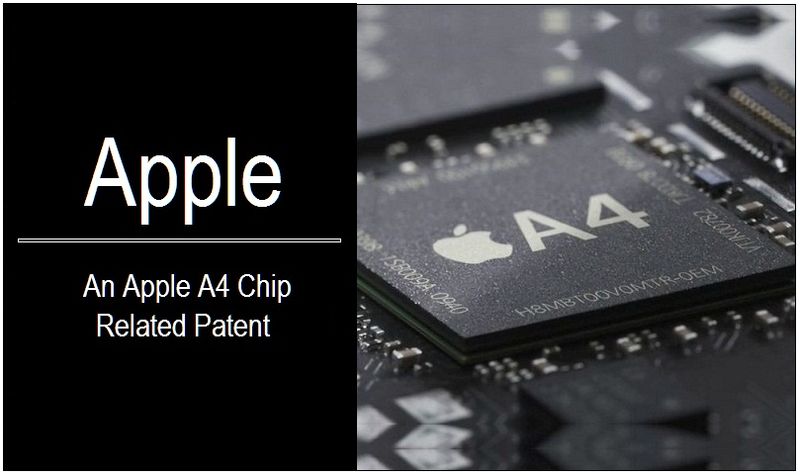 Today, in a newly published patent application from Apple Inc., we get to see a glimpse behind one of the many processes behind their new powerhouse A4 processor. Apple's patent reveals systems and methods for providing a system-on-a-substrate. In particular, this patent relates to systems and methods for reducing the total size of a system's circuitry by providing all of the components of the system on the same microchip. A microchip that the patent reveals is behind the iPad, iPhone and likely to be used in other future Apple products such as Apple TV.

Systems, such as systems for an electronic device, are often created from multiple components. For example, the components of a system could include one or more of a processor, memory (e.g., RAM, SDRAM, DDR RAM, or ROM), CODEC circuitry, Input/Output ("I/O") circuitry, communication circuitry, accelerometers, capacitors, inductors, or any other suitable components. Traditionally, each of these components is a distinct "entity" and could be created on a separate microchip or could be included in a separate package.

The components could include, for example, one or more of a processor, memory (e.g., RAM, SDRAM, DDR RAM, and ROM), CODEC circuitry, Input/Output ("I/O") circuitry, communication circuitry, accelerometers, capacitors, or any other suitable components.

Apple's patent, in respect to components discussed earlier, states that "A system utilizing these components could be included in any suitable electronic device such as, for example, a cellular telephone, a personal data assistant ("PDA"), a digital media player (e.g., an iPod available from Apple Inc. of Cupertino, Calif.), a computer, or any other suitable electronic device." The latter entry of "computer" is both interesting and important considering that Apple's recent iMac Touch patent basically confirms that possibility in practice. Meaning that an iMac Touch could utilize both a standard CPU from Intel or AMD in addition to an A4 type chip or, as the patent presents it, a "system-on-a-substrate" – for touch related functionality.

Apple first launched the A4 on January 27, 2010 as the brains behind their new revolutionary iPad and referred to it as a System-on-a-Chip or SOC: "iPad is powered by A4, Apple's next-generation system-on-a-chip." Apple's A4 chip may also end up in Apple's forthcoming Apple TV update due on September 1, 2010 if Engadget's sources are correct. 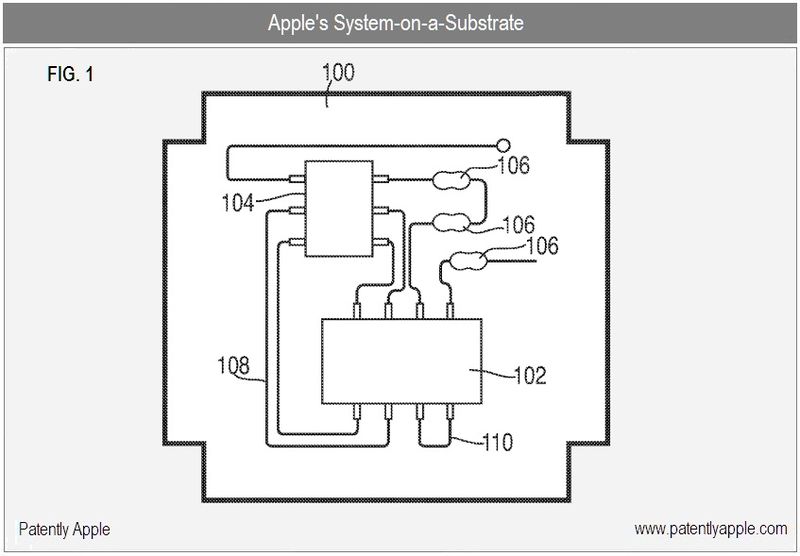 Apple's patent FIG. 1 shows an illustrative PCB (Printed Circuit Board) 100 that could be used for coupling together the components of the system when the components are each discrete entities. For example, discrete entities such as a processor microchip 102, memory microchip 104, and one or more capacitors 106 could be coupled together through PCB 100. PCB 100 could be formed with conductive pathways or wiring (e.g., wiring 108 or 110) that could suitably provide electrical connections between the various entities of the system to couple the entities together.

The PCB 100 of FIG. 1 could generally couple together the various components or entities for an entire system of an electronic device. For example, the PCB may couple together the necessary entities for a system used in a cellular telephone, a personal data assistant ("PDA"), a digital media player (such as an iPod available from Apple Inc. of Cupertino, Calif.), a computer, or any other suitable electronic device. Because the components of the system are each formed as their own, discrete entities and are generally pre-packaged instances, the minimum size of the system could be significantly constrained by the discrete entities. As one example, the use of the discrete entities may cause difficulties in routing the wiring between the entities, thus requiring additional wiring and space to effectively couple the entities together. As another example, because they are generally pre-packaged entities and cannot be altered, the size of the entities may not be decreased. These limitations may, in turn, limit how small in size the electronic device that is utilizing the system could become.

Overview of Other Systems-on-a-Substrate Configurations 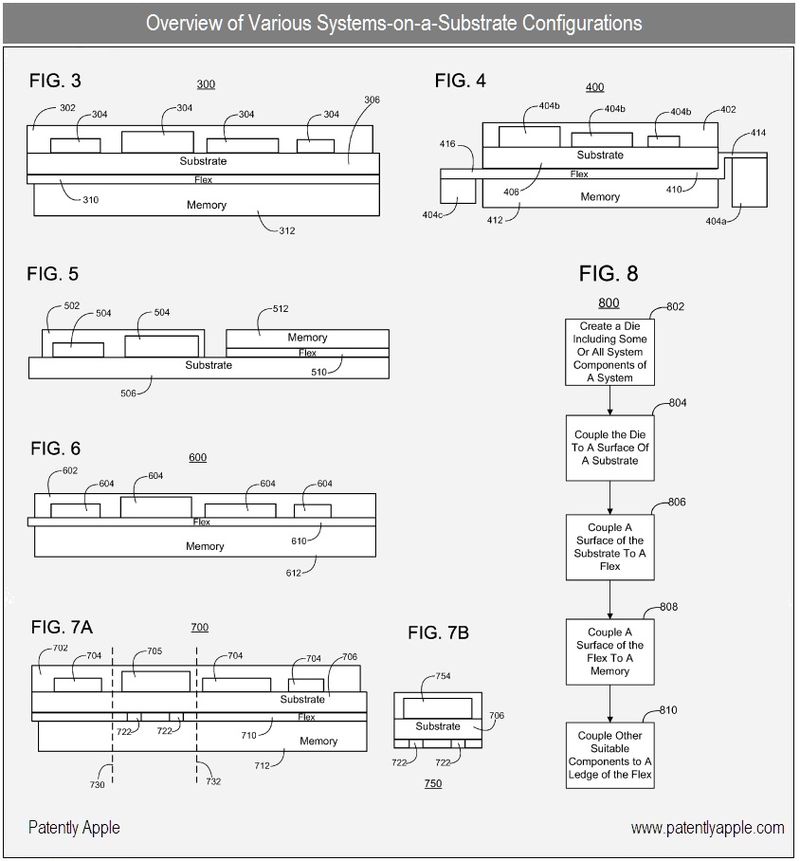 Update Noon August 26, 2010: An in-depth report on the the inside of the A4's Heart has just been released by the Tech-On website from their parent magazine Nikkei Electronics Asia that's worth a review. 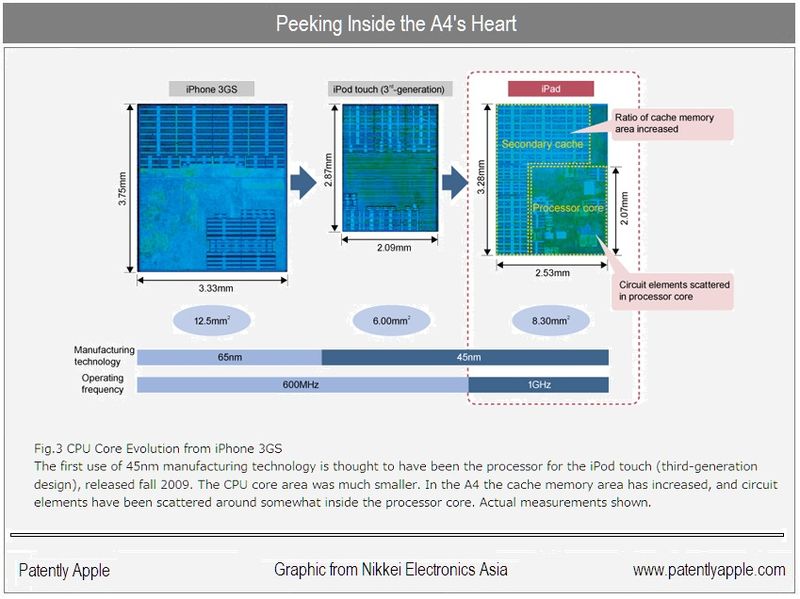 System and Method for Processing Graphics Operations with Graphics Processing Unit: This 2007 based Continuation-Patent 20100214305 was invented by Mark Zimmer who was behind this week's granted patent "Multi-Conic Gradient Generation." 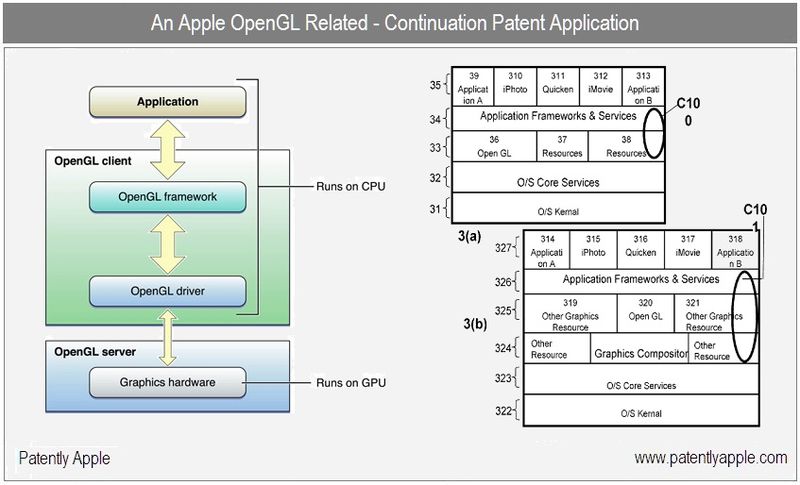 Today's patent application covers OpenGL. OpenGL is the industrial-strength foundation for graphics in Mac OS X and the gateway technology for accessing the power of the graphics processor. As the most widely adopted 2D and 3D graphics API in the industry, OpenGL powers a broad range of applications that visualize and manipulated graphics, including games, animation, CAD/CAM, and medical imaging. In Mac OS X Leopard, OpenGL also accelerates key graphics technologies such as Core Animation, Core Image, Core video and Quartz Extreme. Apple's patent FIG. 3 above includes iPhoto and iMovie.

Also published today is an ancient FileMaker Pro Continuation Patent 20100217779 in addition to an interesting new patent application relating to a possible future iPhone "Audio Jack with Included Microphone" under patent application 20100216526. See our full report on this here.

The vast majority of this patent, though extremely detailed, is primarily reviewing details about Apple's iSight camera and iChat in relation to utilizing GPU advances from video cards such as those from NVIDIA and ATI. Although the patent could extend to "videophones," the vast majority of the patent is about processing video via ichat, QuickTime and iMovie. Apple may have decided to quickly update this patent in order to cover the iPhone 4's FaceTime which debuted shortly after the renewed application. FaceTime will eventually spill over to other devices later in 2010 or 2011, such as the iPad and/or iPod touch.