Patents: The Magic behind GarageBand

In-person music instruction can be expensive and/or inconvenient because of travel and/or scheduling. Additionally, with group instruction, it can be frustrating to follow a group pace for instruction that may be too fast or too slow for a particular person's skills and abilities. Thus, students, musicians and other music hobbyists are increasingly using computers to improve, expand and strengthen their skills playing a variety of musical instruments. Various conventional computer programs exist to provide musical instruction.

One drawback of conventional music instruction programs is that the displays and/or user interfaces associated with these programs are not intuitive and/or they fail to recreate the visual cues and subtleties that can be critical for learning to play a musical instrument. Another drawback of conventional music instruction programs is that while a user may be able to go through various lessons at his/her own pace, the actual tempo of the music instruction frequently fails to provide adequate flexibility (e.g., accompaniment music may be too fast or too slow or cannot be changed dynamically on the fly). In other words, while these programs may provide convenience and/or cost savings, they ultimately fail to provide the same caliber of instruction that a real person can provide.

Apple's GarageBand comes to the rescue to remedy these problems and inconveniencies. 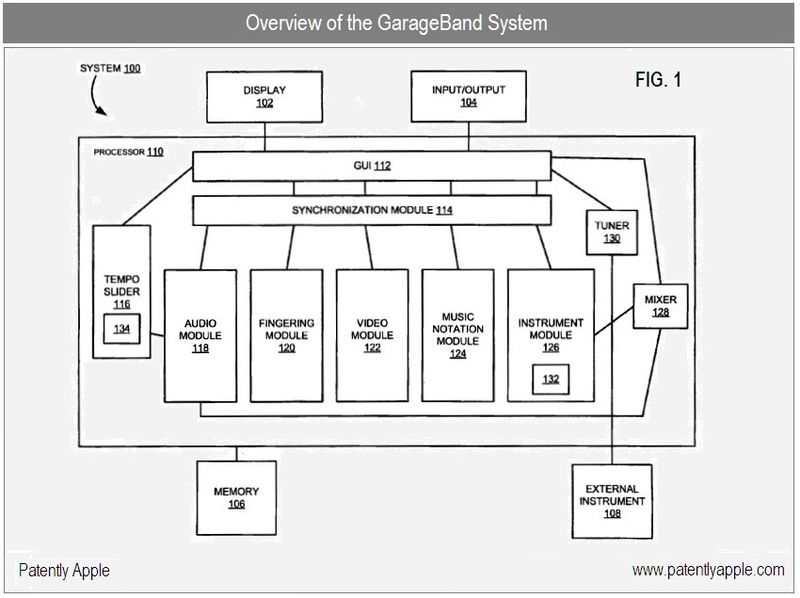 Graphical user interface (GUI) 112 noted above, allows a user (e.g., a music student) to interact with the various components of the GarageBand system via display 102 and input/output 104. Various embodiments herein are described using a guitar as an example of a musical instrument used in teaching/learning. However, one of skill in the art will appreciate that other instruments could be used in various embodiments, including, but not limited, to pianos, drums, brass instruments (trumpet, French horn, etc.), reed instruments (saxophone, clarinet, etc.), etc.

Audio module 118 plays an audio of a song as part of a music lesson in various embodiments. The audio may be retrieved, for example, from a memory 106. The audio may be output via the input/output. Video module 122 displays a video of the song in the user interface (112). The video shows an instructor playing (e.g., a guitar) along with the audio. The video could include various views, angles, and/or perspectives of the instructor and/or the guitar.

The Instrument module further includes a vibration component 132 that causes the strings on the graphical element of the guitar fret board to visually vibrate when a note or chord is to be played.

The GarageBand System 100 also includes a tempo slider 116 that is displayed in user interface. A user may adjust the tempo of a song being played in real-time using the input/output. For example, if a particular song is recorded/stored at 100 beats per minute (BPMs), but the tempo is too fast for the user (e.g., student) to keep the pace while playing along, the user can adjust the tempo down to, say, 85 BPMs. Some conventional music software provides for tempo adjustment. However, in embodiments described herein, the tempo slider includes a pitch stabilizer 134 to stabilize a pitch of the song audio in real-time in response to a tempo adjustment during playback of a song. Thus, a user can adjust the tempo during playback of a song while maintaining the proper pitch of the song. The synchronization module maintains synchronization of the various synchronized modules in real-time when a tempo adjustment is made.

Mixer 128 also includes a graphical element displayed in the user interface, in this case allowing a user to apply configurable mixing parameters to the song audio and/or the external instrument audio. Mixing parameters can include, but are not limited to, master level, track levels, bass, treble, mid-range, and various effects (e.g. sustain, echo, etc.), etc.

Apple's patent FIG. 2 of patent 20100162880 represents a block diagram illustrating a system that executes files. System 200 could be a computer, a device or musical device, an instrument, etc. capable of providing musical instruction. The system includes at least a processor 202, a memory 204, and a display 206. The processor executes a project file 210, which may be retrieved from memory. The project file includes a variety of tracks that facilitate musical instruction, in part, using a graphical user interface (GUI) in conjunction with a display. In various embodiments, the tracks described herein are maintained as Musical Instrument Digital Interface (MIDI) tracks. 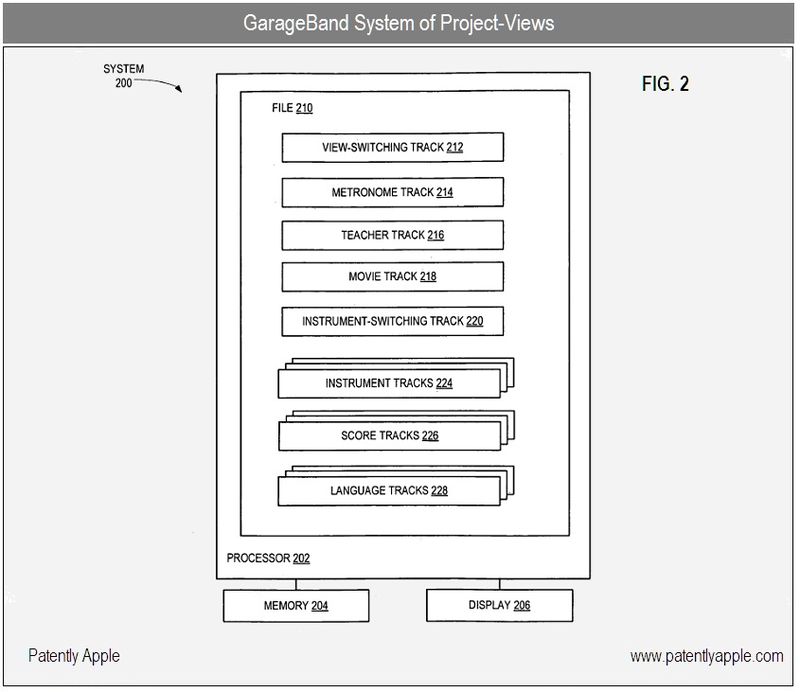 The View-Switching Track: The view-switching track also allows the musical score view to be switched automatically during playback of a song. Controller data on track 212 controls which score view among score tracks 226 will be displayed at which particular time during playback. As discussed previously, score views may include full score, right hand, left hand, simplified versions of full score, right hand, left hand, and various other combinations. Additionally, score views may include song lyrics in various embodiments.

Movie Track: As discussed above, a movie track 218 may be displayed in all project views. Unlike the other tracks (which are maintained as MIDI tracks in various embodiments), movie track 218 is maintained in a separate video file (e.g., a Quicktime.RTM. file) that is linked to project file 210.

Score Track: Each different type of display is stored as a separate score track. Examples of notations used in score tracks include, but are not limited to, full piano, right hand, left hand, piano chords, guitar grids, tablature (TAB), TAB+notation, and guitar chords. Thus, depending on the notation used, the musical score associated with the song is displayed in sync with the song audio during playback. In other words, the timing of the particular notes/chords displayed in musical score display 116 corresponds to the timing of those notes/chords being played in the song audio.

Apple's patent FIG. 2 of patent 20100162878 shown below is a block diagram illustrating a graphical user interface (GUI) display in a music instruction system according to various embodiments. For a given song (to be taught/learned), GUI 212 provides a variety of displays to facilitate the musical instruction. Video/movie display 214 displays a video of the song. In various embodiments, the video sets the foundation component to the song instruction. The video itself may be maintained in a single video file (e.g., a Quicktime file). In certain embodiments, audio associated with the video is maintained in a separate audio file. The video includes one or more angles/views of an instructor playing the song on an instrument (e.g., guitar, piano, etc.). The video angle(s)/view(s) may change during playback of the song video. In some embodiments, each video angle is maintained in a separate video file.

In embodiments where the video includes multiple views, one view might be, for example, of the right hand playing the instrument (e.g., piano, guitar, etc.) while another view shown simultaneously might be of the left hand playing the instrument. Other combination of views including, but not limited to, body position, instrument views and the like are contemplated in various embodiments.

Control panel 220 may include a variety of user-selectable options (e.g., play, record, tempo adjust, etc.) related to interacting with the music instruction system. Included in control panel is a metronome 222. Metronome can be turned on and off by a user, who can also adjust the tempo in various embodiments. In addition to the user controls, the metronome may be switched on and off automatically during playback of a song in some embodiments.

In response to receiving user input to enter an edit mode, graphical element could be displayed such that it appears that the one or more guitar effects pedals are lifted up off the ground (e.g., for the purpose of being adjusted, changed, etc.). Once again, other views or arrangements of the guitar effects pedal(s) could be used to visually represent the edit mode selected by the user. As used herein, "edit mode" refers to a mode of operation of the music software that is used while editing the configuration, control parameters, settings, etc. of the various modules (e.g., guitar effects pedal module 122, guitar amp module 116, etc.). 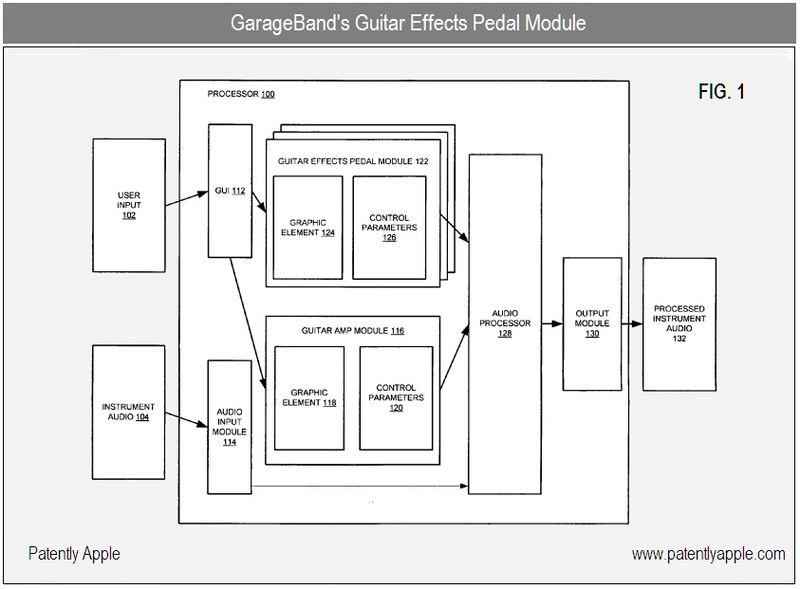 The control parameters for the guitar amplifier module facilitate control of various amp settings when the system is in an edit mode. More than one edit mode could exist in various embodiments. Amp settings may include, but are not limited to, amp model, send amounts for Master Echo and Master Reverb, input source, monitoring settings (e.g., off, on, on with feedback protection, etc.), and recording level. In a play mode, the control parameters directly influence the sound output from the guitar amplifier. The play mode control parameters can include, but are not limited to gain, bass, mid-range, treble, presence, master, output, reverb, tremolo rate, and tremolo depth.

The GarageBand System also includes an audio input module 114 to receive instrument audio 104. For example, the audio input module might include a standard quarter inch analog plug to serve as the connection point for an analog cable connected to an electric guitar, a digital keyboard or other instrument. Other connection plugs (e.g., RCA plugs, mini RCA plugs, microphone plugs, etc.) could be used to receive the instrument audio.

Various aspects of the GarageBand System that were presented in today's report are further detailed in three distinct patent applications: Audio Processing Interface 20100169775, Method and System for Music Instruction Files 20100162880 and Music Instruction System 20100162878. All were originally filed in late December 2008 – or about 18 months ago.

Four patent applications relating to Apple's Aperture were published today which include the following: Slide Show Effects Style 20100169784, Framework for Slideshow Object 20100169783, Effects Application Based on Object Clustering 20100169389 and Light Table for Editing Digital Media 20100169777. In Apple's Professional website section, they profile Vincent Laforet, a staffer who left the Times to pursue other projects including commercial photography. Aperture has been a key part of this transition. In this profile, Laforet states that "My clients love to use the Light Table feature. We move pictures around and make our selections that way, very much as we had always done until computers make that a problem." Apple's Light Table patent covers this feature and more.