The US Patent and Trademark Office officially published a series of 12 newly granted patents for Apple Inc. today of which two were for design patents including one for Apple's 3G iPhone. The notables within the remainder of this group include one relating to Apple's OS X feature known as Dashboard and perhaps most importantly, Apple has won a strategically important multi-touch patent covering a visual expander that may be used in a future iteration of the iPad or other unique multi-touch application.

Apple has won a strategically important multitouch patent regarding a visual expander feature that has yet to surface in iOS.

As you know, touch screens offer ease and versatility of operation and allow a user to make selections and move a cursor by simply touching the display screen via a finger (or stylus). Apple's granted patent states that "While touchscreens generally work well, they are difficult to use when features such as buttons, web page links, or UI controls presented on the touch screen display are too small for finger activation, i.e., the finger is too large relative to the button, link or UI controls. Furthermore, the features typically don't provide the user with any feedback indicating that a finger is located on the feature. This may make it difficult to determine what feature is being selected. As a result, the user may incorrectly select a feature. For example, in web browsing, users have no control over the size of the link or button presented by a website."

Apple's granted patent notes that Apple's OS X is designed to magnify the dock including the icons when the cursor is moved over the docks icons. Yet the patent notes the limitation of this feature by stating that "While this works well, the feature has no control over the content presented on the remainder of the screen, i.e., the remaining portions of the screen do not magnify when the cursor is positioned thereover. Furthermore, this particular feature only works on the main system page. It does not work in programs or applications or even web pages." 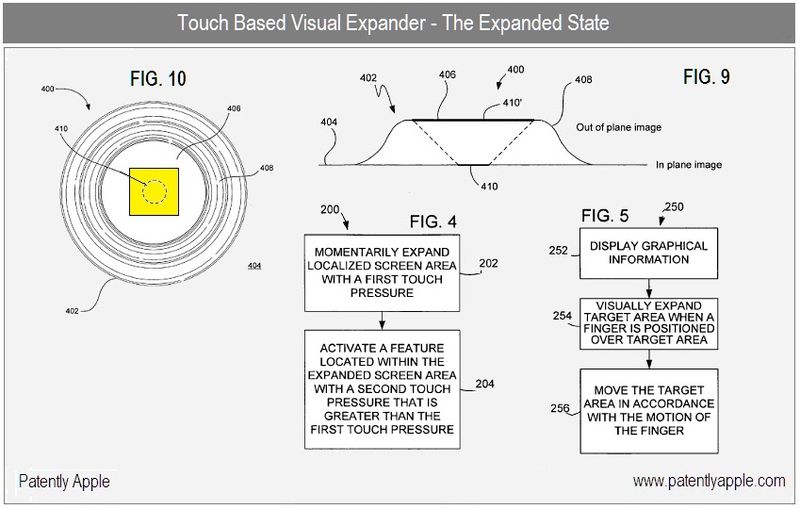 In the illustrated embodiment, the expanded portion includes a plateau region 406 and a transition region 408. The plateau region is configured to display the target area 410 (noted as the yellow circle) in a larger and magnified state – which roughly translates to a magnification of 3 times that of the target area 410. This will allow most adults, especially those with larger fingers, the ability to use touch areas and controls such as hyperlinks with ease, unlike some controls on the iPhone today.

Yet until we see this feature, it's difficult to say whether or not Apple is referring to their patent pending high end 3D OS interface or not. There's a video presented in Patently Apple's report on this proposed 3D OS that clearly demonstrates how the eye could be fooled into perceiving depth that is limited to the display. This appears to be how Apple is describing their new Visual Expander feature.

Note: Here's a quick tip to help you understand the following graphic. A portion of the patent figure 12M shown below is actually jetting out of the graphic as opposed to being dragged, as the graphic first appears at a glance.

Apple's patent describes FIG. 12M as follows: "the finger 514 is moved from the title to a link positioned within the window 520. Similar to the buttons and title, the portions of the link in the plateau are fully enlarged and magnified while the portions in the transition region are distorted and further the portions outside the expansion are of normal size and magnification. As shown in FIG. 12N, the user exerts a greater pressure on the touchscreen while the link is in its expanded form. This increased pressure is recognized as a touch event, and the element associated with link is launched or opened (although not shown)." 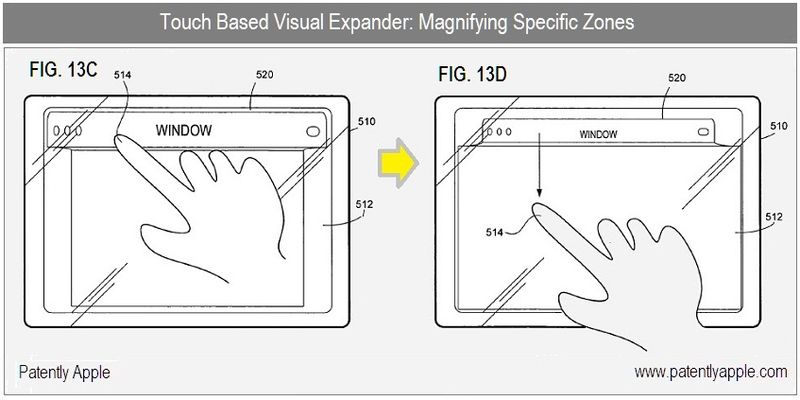 As shown in FIG. 12I, as the finger moves away from the buttons, it moves over an inside edge of the window 520 thereby causing the inside edge to be expanded as well as text in FIG. 12J.

Apple has been granted a patent for their OS X Feature known as "Dashboard." Dashboard is home to widgets: mini-applications that let you perform common tasks and provide you with fast access to information. With a single click, Dashboard appears, complete with widgets that bring you a world of information — real-time weather, stock tickers, flight information, and more — instantly. Dashboard disappears just as easily, so you can get back to what you were doing. 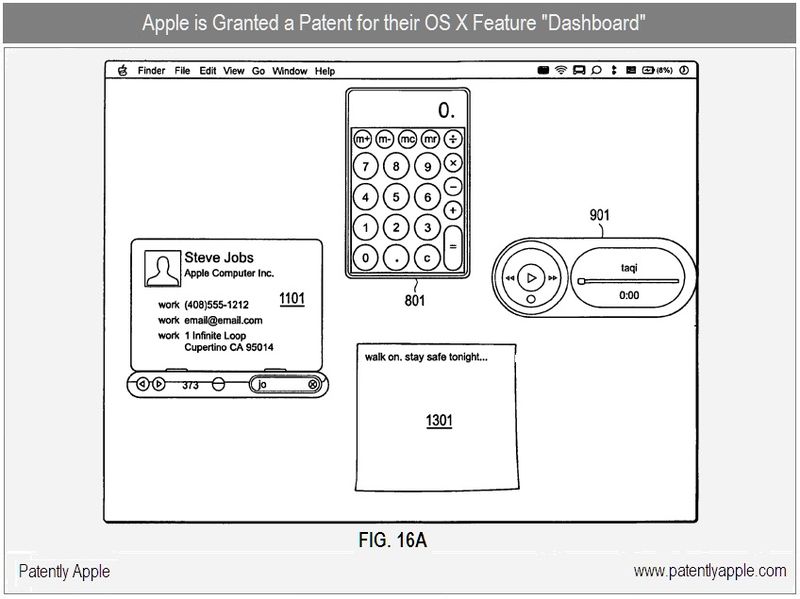 Apple credits Imran Chaudhri, John Louch and Andrew Grigon as the inventors of Granted Patent 7,761,800 originally titled "Unified interest layer for user interface." While the patent is shown to have been originally filed in Q2 2005 – there are related documents that date much further back starting in 1988. See the patent for more details.

GP - D620,004 – Electronic Device: Apple has won yet another design patent for their 3G iPhone. Their first win was in September 2009.

GP - 7,761,798 - System and Method for Controlling the Screen Display Appearance for a Data Processing System

According to exemplary embodiments of the invention, the filesystem structure is defined using an hierarchy of filesystem objects, and then only the structure need be stored in memory as opposed to the complete filesystem (i.e., structure and actual data). Therefore, the invention overcomes the drawbacks associated with conventional methods which require that a complete image of the filesystem be created.

Then, during the pre-write stage, the filesystem structure stored in memory is recursively traversed beginning with the root object, and output blocks are allocated for each filesystem object specifying, among other things, size, placement criteria and a callback function for producing data. Then, during the write stage, actual file data is retrieved and each block is written to the specified media.

Various embodiments described in Apple's granted patent relate to systems and methods for synchronizing data between two or more data processing systems such as a desktop computer system and a handheld computer system.

Broadly speaking, Apple's granted patent relates to techniques for providing access to databases from iOS devices. The database system provides a graphical user interface which is displayed on handheld devices to perform a variety of operations. Moreover, the user could perform these operations without having to write programs and virtually in real time. Thus, the user could conveniently access the database and be provided with up-to-date information. In addition, the user could be provided with hyperlinks which would allow the user to conveniently perform various tasks without having to switch between different operation modes. The patent references FileMaker Pro and interestingly may relate to FileMaker's Go App for the iPhone and iPad.

Or picture each Window/Object View as an resolution independent view. By having the visual expander you can scale, at will, the on-screen objects you're interested in seeing.

Interesting observation Tom. But why would you need a visual expander on a large Mac OS X based touch display? I think that the whole idea behind a visual expander is to expand type and/or an element that is too small to see or work with on a handheld device. Then again, on a small notebook tablet hybrid, you might be right. Thanks for your comment Tom.

The Visual Expander seems much more set up in it's pictures for Mac OS. I could see it fitting more with a touch enabled Mac OS.