The US Patent and Trademark Office officially published a series of 16 newly granted patents for Apple Inc. today. The first notables within this group includes one that relates to eight all-new iPod nano designs that definitely describe one of the designs as being a cell phone. The second patent uniquely covers Apple's MagSafe in connection with future iOS based devices like the iPad, iPhone and more.

Apple has been granted a patent for a series of eight unique iPods or "Media Players" – with one of them being considered for multi-purposes such as a storage device and/or a cellular phone. The exact patent verbiage states the following: "FIG. 1 is a perspective view of a handheld portable computing device in accordance with the present design. The handheld portable computing device can for example be a media player, media storage device, cellular phone." Apple's FIG 1 is noted below in another angle displayed in the patent as FIG. 2. The design has no hardware interface which is closer to today's iPhone. In contrast, Apple also presented a second iPhone Nano design as seen below in FIG. 22. Apple provides no explanation for the other versions of the iPod Nano designs. 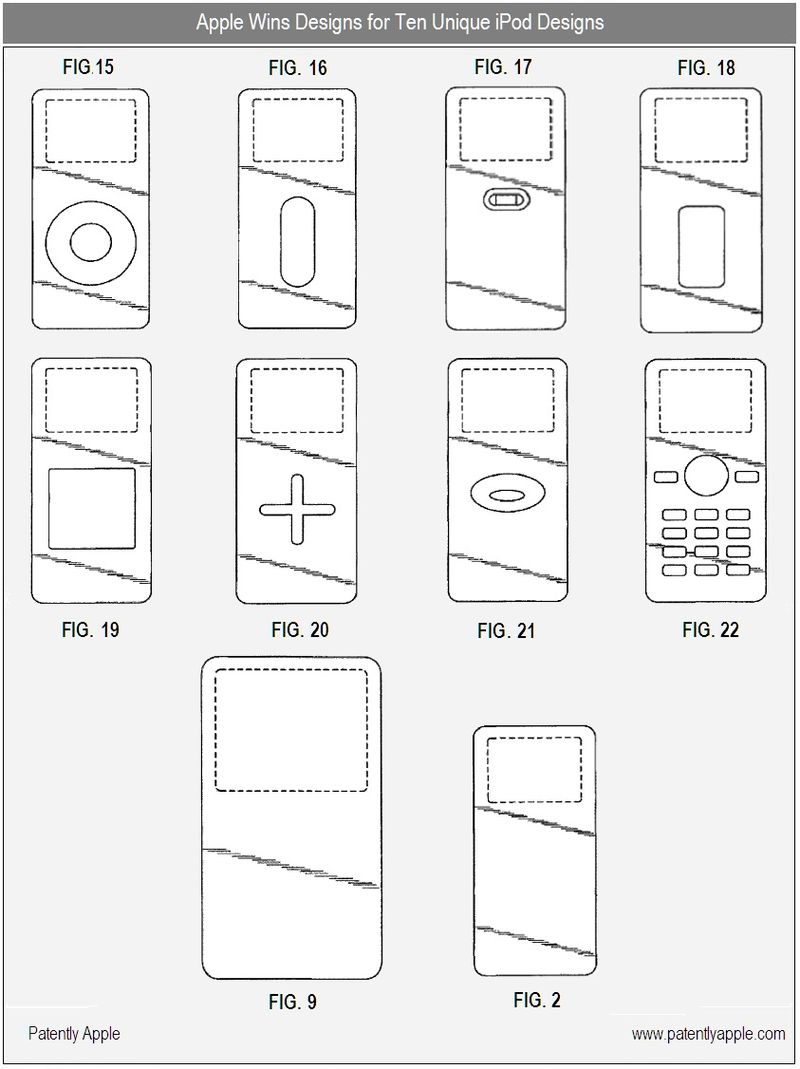 The additional designs may simply have been provided so as to protect a spectrum of designs for future applications. Apple does state that the range of sizes cover the full spectrum from nano to what appears to be the iPod Classic. Apple has been working on a nano phone for some time now. Whether any of these nano-phones will ever surface in the marketplace is another matter.

Apple credits CEO Steve Jobs, Bartley Andre, Daniel Coster, Daniele De Iuliis, Richard Howarth, Jonathan Ive, Duncan Kerr, Shin Nishibori, Matthew Dean Rohrbach, Douglas Satzger, Calvin Seid, Christopher Stringer, Eugene Whang and Rico Zorkendorfer as the inventors of Granted Patent D620,488. It should be noted that while today's patent is claiming that the original filing date was January 2009, that is likely relating to their U.S. filing. The reality is that these designs were first published by the European Trademark Office in January 2006 and made public in the U.S. in July 5 2006.

Apple has also been granted Design Patents for the Apple Remote (D620,456) which was first granted a patent in April 2010, the iPhone's "shutter effect" (D620,496) and the Magsafe connector (D620,450) which may be extended to other Apple products as presented in another patent below.

Interestingly we find this morning that Apple has won a patent titled "System for coupling interfacing parts" which illustrates how Apple is considering adding a MagSafe Connector to iOS based devices (iPad, iPhone and iPod touch) as noted below.

Apple's patent FIG. 7 is a simplified diagram of at least a portion of an electronic device 50, in accordance with one embodiment of the present invention. The electronic device 50 may, for example, be a portable device such as a laptop, tablet computer, cell phone, media player, or the like. 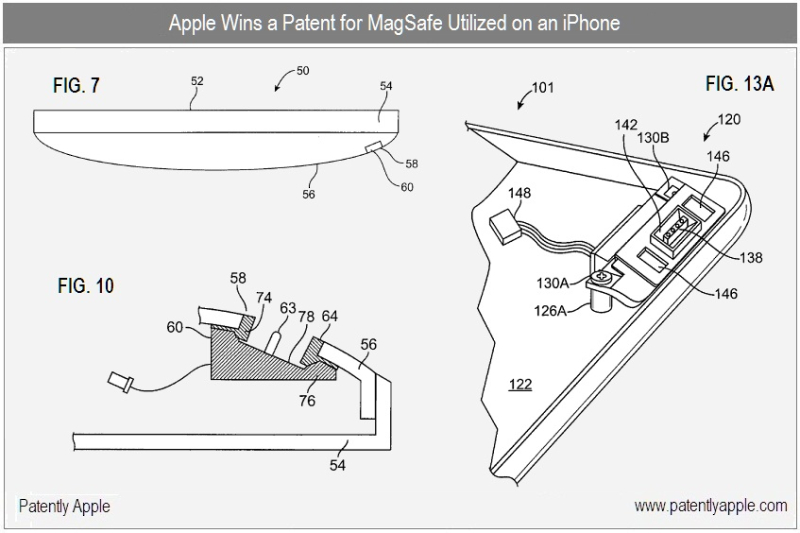 To clarify, the patent states that "The movable connector base also may include a connector region that contains a protruding member having one or more electrical contacts. In the illustrated embodiment, there are 5 contacts situated in a line. The pin layout may correspond to the pin layout of the MagSafe Power connector manufactured by Apple Inc. of Cupertino, Calif."

MagSafe is currently found on Apple's MacBook Pro, MacBook, MacBook Air notebook computers and also on Apple's LED Cinema Display. LEDs on both sides of MagSafe show green if the computer batteries are fully charged and amber if they are charging. Adding MagSafe to iOS devices