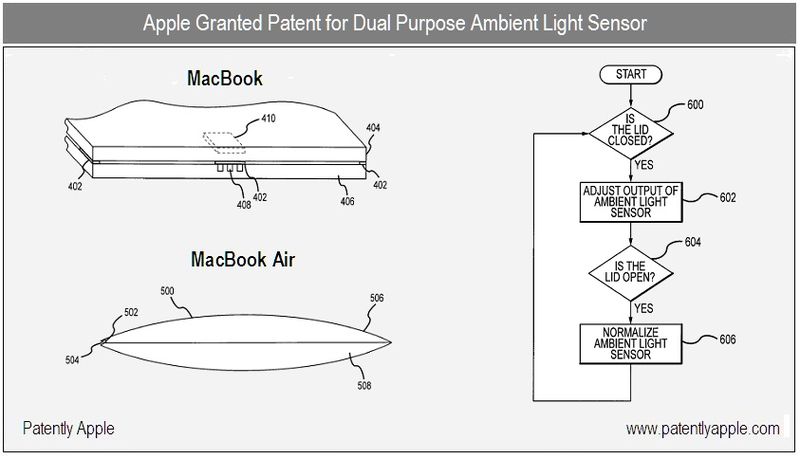 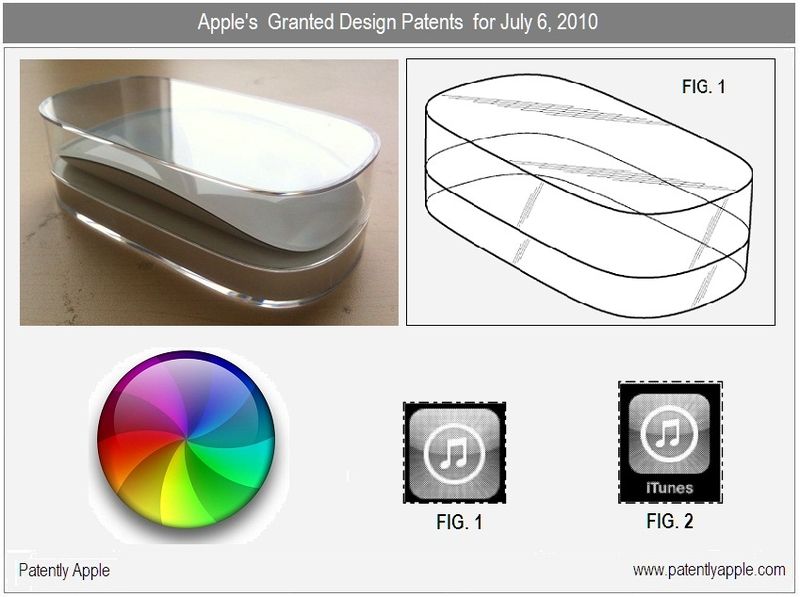 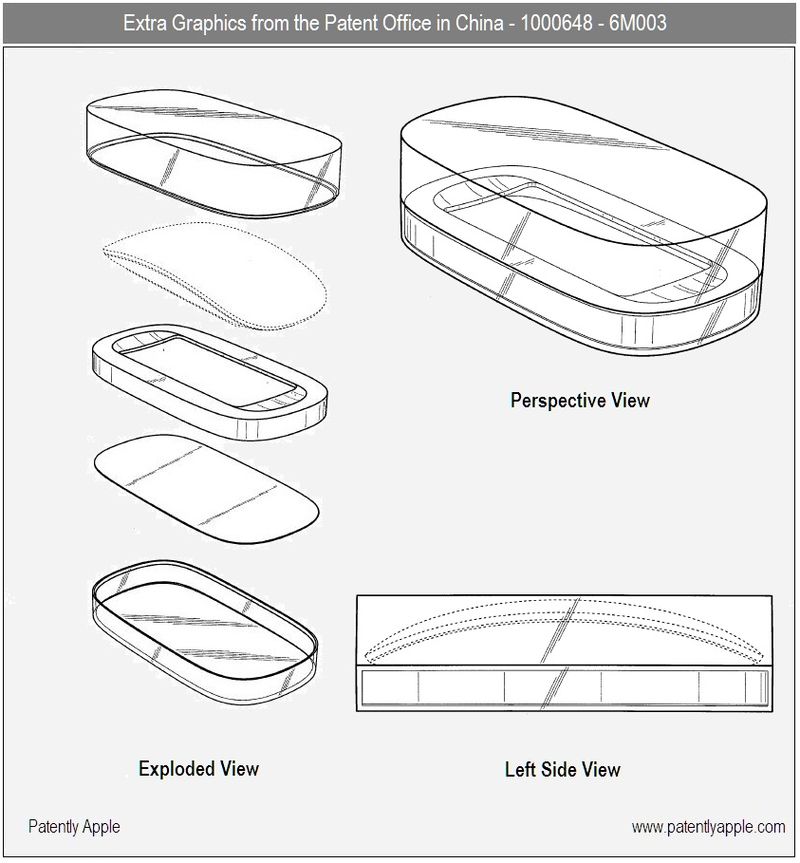 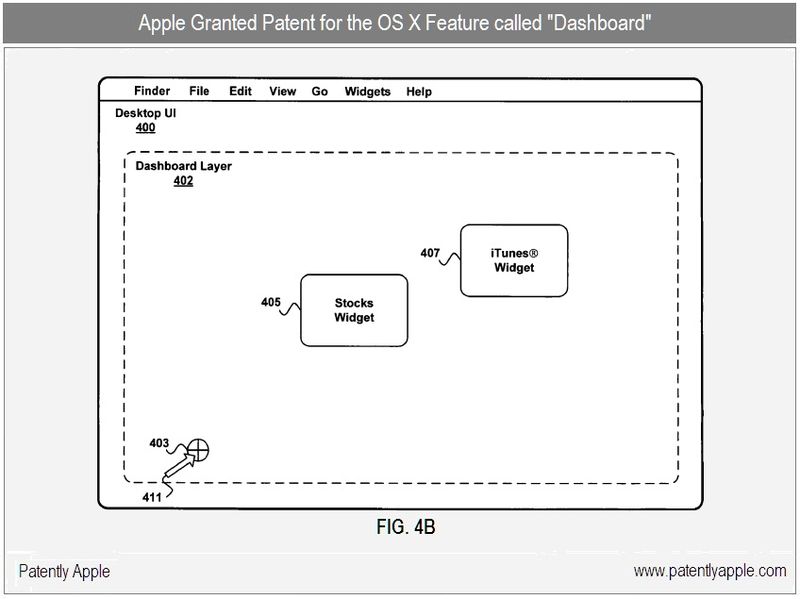 Apple has been granted patent 7,752,556 for their Dashboard System for widget workflow. Apple describes Dashboard this way: "Not everything you do on your Mac requires a heavy-duty application. For those smaller tasks, Mac OS X features Dashboard, a semi-transparent layer that floats above your desktop at the press of a key, and provides access to several fun and functional, mini applications called widgets." For more see Dashboard 101. 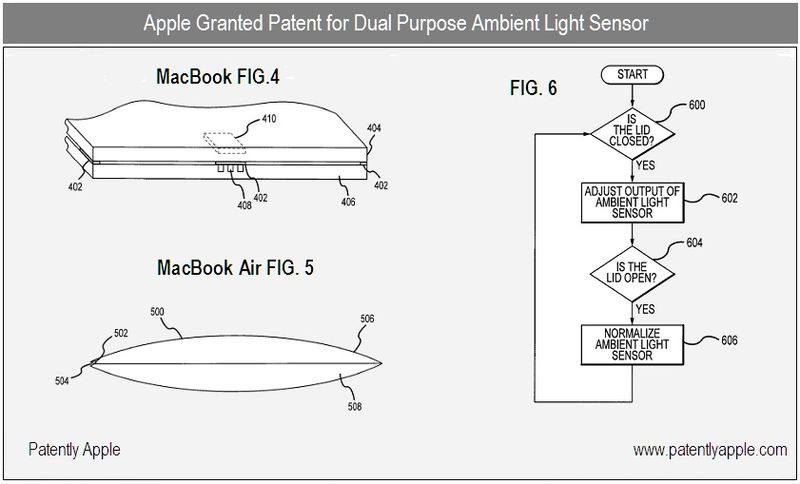 Apple has been granted several patents relating to iPod assembly which include the following:

Support Tabs for Protecting a Circuit Board from Applied Forces (7,751,199): Apple's invention relates to the iPod having one or more support tabs that protect a circuit board disposed inside from externally applied compressive forces. In particular, when a force is applied to a housing of the iPod, the support tabs could buttress the housing either directly or through other intervening components disposed within the iPod, to reduce the likelihood that the housing or intervening components will contact and damage the circuit board. See patent figures 2, 3A and 3C below.

Multi-Connector Assembly (7,751,198): Apple's invention relates to methods and apparatus for constraining multiple connectors in an iPod (or other electronic devices) in one or more degrees of freedom. See patent figure 2 below which illustrates and exploded view of some of the components related to the iPod in relation to this patent. 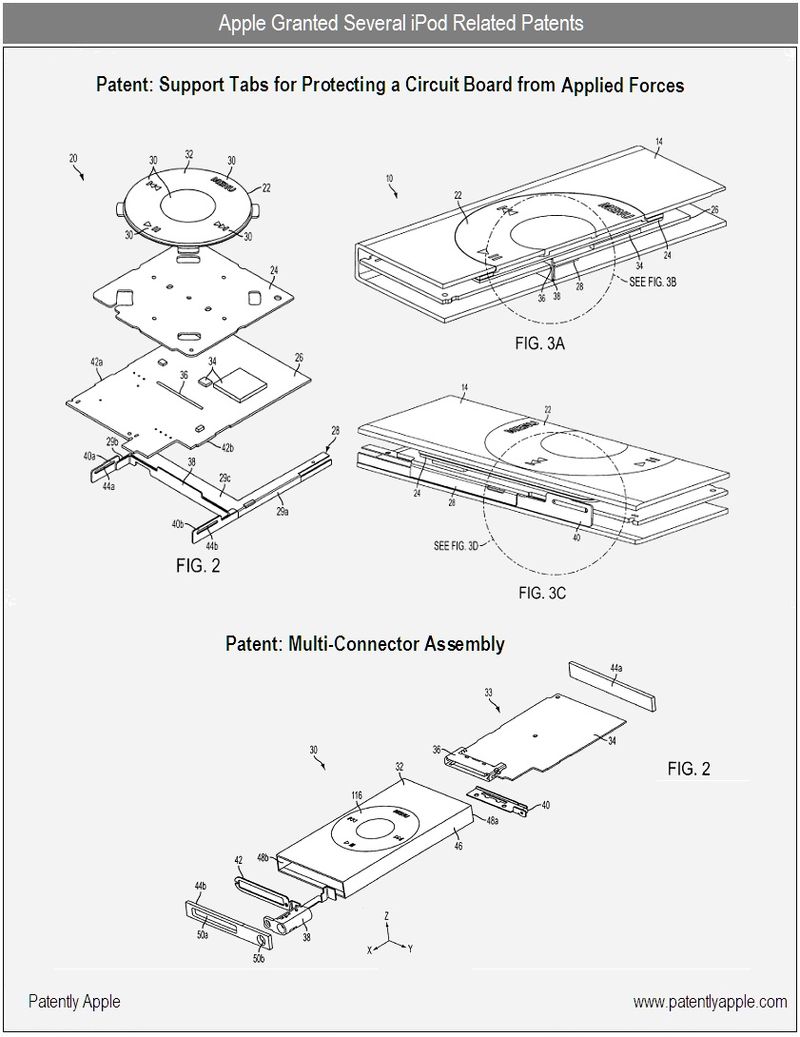 Apple's invention provides a system and method for encoding video that yields very high quality images while smoothly playing at full video speeds. Image data is first converted by the present invention from the RGB domain into a gamma-powered YUV domain. A wavelet transform then separates image data into high- and low-detail sectors, incorporating a dynamic scaling method, which allows for optimal resolution, i.e. an optimal number of bits in wavelet results, per-sector, and enhances the resolution of all sectors. The output data from the wavelet transform is then quantized according to an entropy-prediction algorithm that tightly controls the final size of the processed image. An adaptive Golomb engine next performs a compression step, using an adaptive form of Golomb encoding in which mean values are variable across the data. The use of variable mean values reduces the deleterious effects found in conventional Golomb encoding in which localized regions of similar data are inefficiently coded if their bit values are uncommon in the data as a whole.

As the power consumption of processors has increased, implementation of power management modes in processors has become increasing important. In many systems, the power supply is at least sometimes a battery or other stored-charge supply. Maximizing battery life in such systems is often a key selling feature. Additionally, even in systems that have effectively limitless power (e.g. systems plugged into a wall outlet), the challenges of cooling the processors and other circuits in the system may be reduced if the processors can be placed in low power modes when full processing power is not needed.

Apple's granted patent provides a solution that relates to the field of processors and, more particularly, to handling caches and cache coherency in power management modes in processors.

Photo Credit: The Magic Mouse photo portion of our Design Patents Graphic is from TiPb's review of the Magic Mouse.

Microsoft always creates competitive products after apple launches one of them. like zune came after ipod. but the problem is about their success