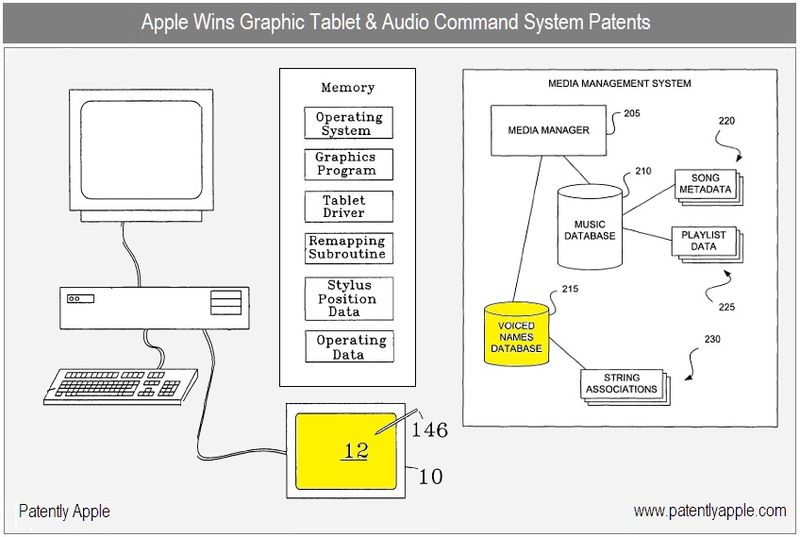 The US Patent and Trademark Office officially published a series of ten newly granted patents for Apple Inc. today of which two were for industrial designs. One of the designs is for a family of media player covers for the iPhone, iPod touch and more. In respect to Apple's regular granted patents, the notables within this group include Apple's audio command system for media players and a graphic tablet system that might actually one day extend to the iPad. Then again, time will tell.

At the 6: 59 pm point of the D8 conference interview with Steve Jobs, the conversation moved to talk of tablets. Walt asks if Apple knew it would build a tablet before it built the iPhone.

Jobs: "I'll tell you a secret. It began with the tablet. I had this idea about having a glass display, a multitouch display you could type on with your fingers. I asked our people about it. And six months later, they came back with this amazing display. And I gave it to one of our really brilliant UI guys. He got scrolling working and some other things, and I thought, 'my God, we can build a phone with this!' So we put the tablet aside, and we went to work on the iPhone." 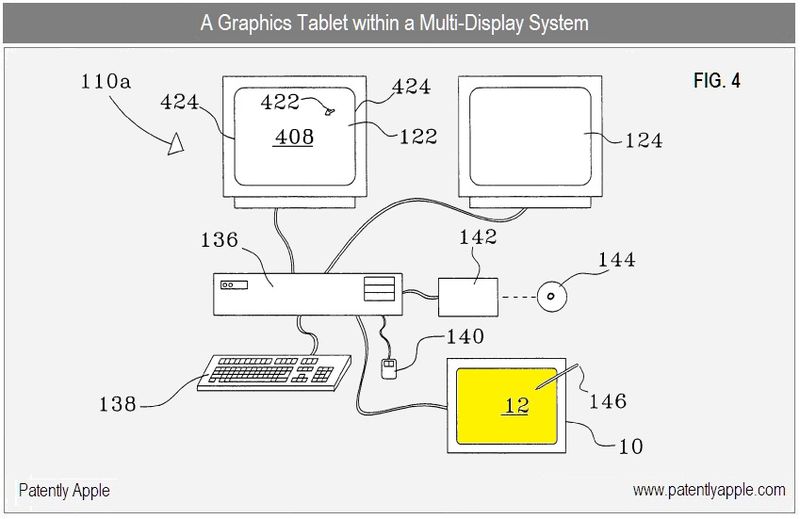 According to today's granted patent, we see that Apple had been testing various ways of controlling a tablet as far back as July 2003 and that it began as somewhat of a normal graphics tablet device and application utilizing a stylus. Although the stylus has been dropped for general computing on the iPad, the stylus is still very much alive in Apple's labs in context with other future applications such as graphics. Whether this application will ever see the light of day is another matter.

Technically speaking, Apple's invention generally relates to the field of computer pointing devices and more particularly to a system and method for controlling the operation of certain pointing devices, such as graphics tablets.

According to Apple's granted patent, the mapping of the display area of a graphics tablet is selectively automatically changed to correspond to one of a plurality of displays without requiring the user to explicitly make such changes. At any one time, the tablet is fully mapped to a single display, devoting the entire tablet's resolution to the mapped display. The tablet's mapping is automatically changed to a different display based on a simple and intuitive user action. Making the mapping change automatic allows the user to fully navigate a system with multiple displays using a single tablet, while at the same time devoting essentially all of the tablet's resolution to the display to which the tablet is currently mapped. Indeed, even a program could initiate an automatic remapping, for example in response to a magnification change, a view change, or other programmatic event.

An additional advantage is that automatically mapping the tablet allows for a portable computing device which has an integrated tablet (such as a PDA) to be connected to multiple displays without requiring the user to connect additional input devices.

Apple credits Richard Fabrick, II as the sole inventor of this patent.

Apple has been granted a patent for their media player's voice menu system. Apple's invention generally allows for updateable audio menus. Although a device might have some pre-packaged menu components, other menu components can be received from a server. Each menu component, regardless of whether it is original or received from the server, has an associated voiced name. When a user highlights a menu choice, the voiced name can be played. The user then has the option of selecting the menu choice or scrolling to a new menu choice. In this way, a user could navigate the menu without having to actually see a visual display of the menu, which may be especially useful for users unable to see the visual display or users with visual disabilities. 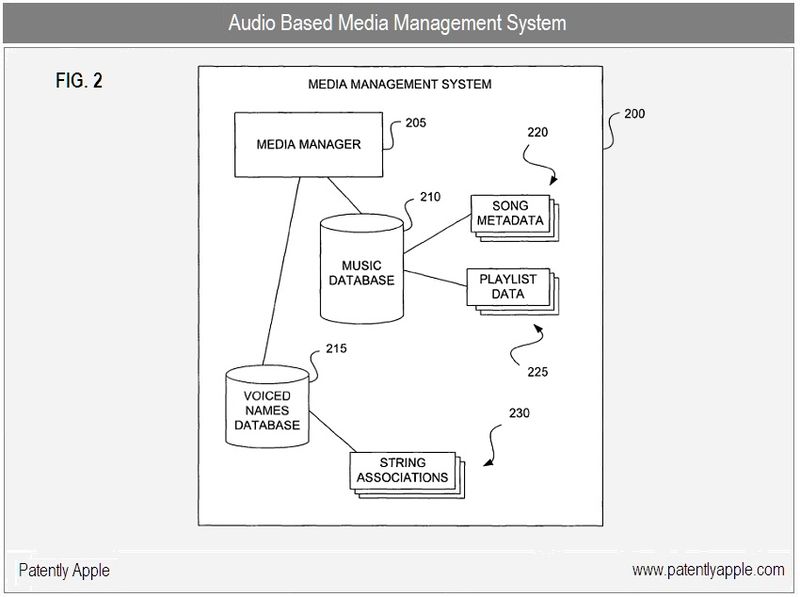 Apple's patent FIG. 2 is a block diagram illustrating an organizational structure of a media management system 200 according to one embodiment of the invention. The media management system 200 is the computer program that allows the user to both organize and access digital media. For simplicity, the following discussion will assume the digital media is limited to music. It should, however, be appreciated that any reference to "songs" or "music" could be generalized to any form of digital media, which can include sound files, picture data, movies, text files or any other types of media that can be digitally stored on a computer. Similarly, any reference to "playlists" can be generalized to media collections, including collections of mixed digital media. 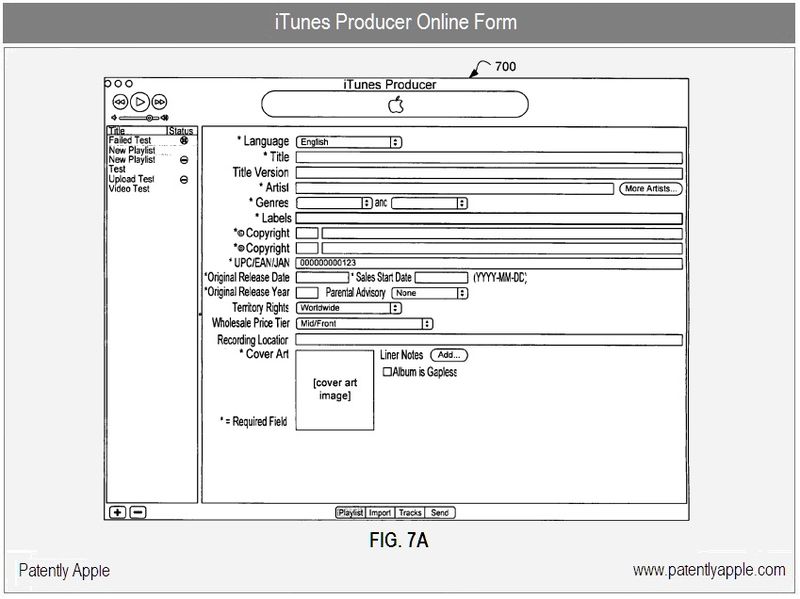 Apple's patent FIG. 7A is a screenshot illustrating a representative media collection information window according to one embodiment of the invention.

Some applications may provide several methods of performing a given function. Some of the methods may be keyboard "shortcuts" that allow the user to perform the function by, for example, concurrently selecting two or more keys. For example, the user may be able to invoke the "save" function of an application by entering a combination of keys, such as "Command" and `S,` or "CTRL" and `S.` In addition to shortcuts within a specific application, a computing system may receive concurrent input from one or more input devices that correspond to "hotkeys" defined in the computing system. The hotkeys may cause the computing system to perform actions either inside or outside of the currently active application. 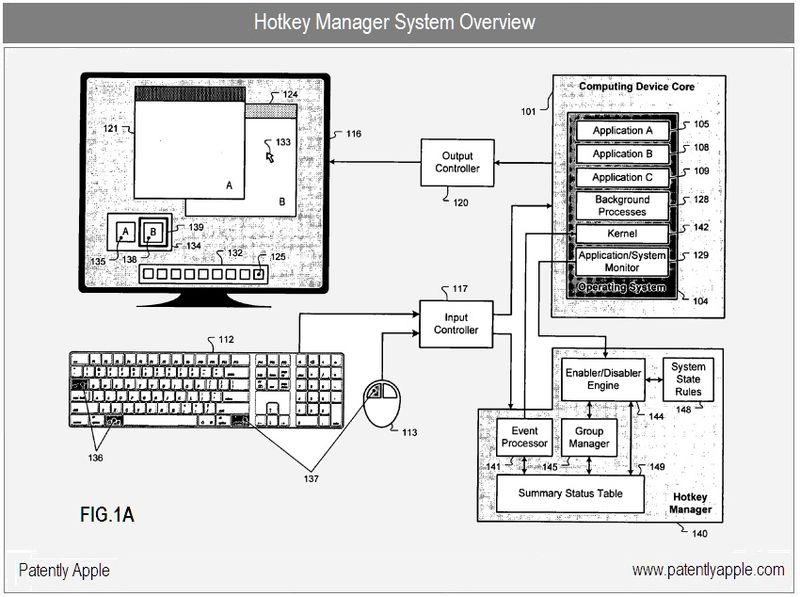 Hotkeys may be used to control various physical aspects of a computing device or various aspects related to an operating system running on the computing device. For example, an input device, such as a keyboard, may include specialized keys or buttons that, for example, mute or adjust volume associated with an audio output device. As another example, a slider control on an expanded keyboard may allow a user to control magnification of a view of a window associated with an application. As another example, an expanded keyboard may provide a number of user-configurable buttons that may be associated with various system or application program operations (e.g., buttons that control display brightness; open or close a CD/DVD tray; or launch a particular program, such as an email client, etc.). As another example, a hotkey may be used to invoke or control an operating system function, such as, for example, to open a task management interface, to open or control a memory manager or monitor, to open or control a CPU performance monitor, to open a registry interface, etc.

Apple has been granted a design patent for a "Graphical user interface" under D619,601 which relates to the iPhone's camera. The second design win is for a "Cover" under D619,361 which Apple describes as follows: "The cover can, for example, act as a sleeve, case, label, or skin for an electronic device such as a media player, media storage device, cellular phone, PDA, smart phone, computer and/or the like." 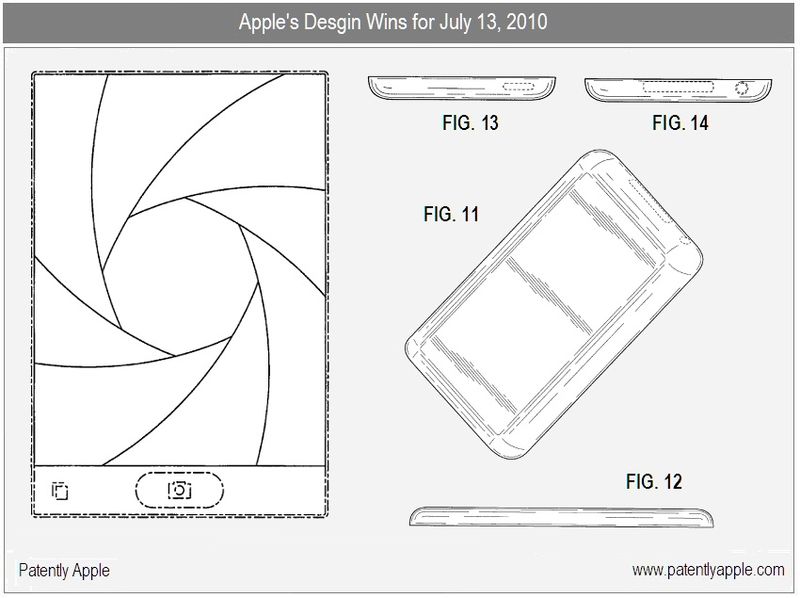 Apple's invention relates to personal media devices and, more particularly, to a folded flex assembly for personal media devices. The invention, in various embodiments, addresses deficiencies in the prior art by providing systems, methods and devices that enhance the ability of a compact media device to support flexible arrangements of more components and, thereby, support more features while also providing enhanced structural support for certain components.

Modern data processing systems, such as general purpose computer systems, allow the users of such systems to create a variety of different types of data files. For example, a typical user of a data processing system may create text files with a word processing program such as Microsoft Word or may create an image file with an image processing program such as Adobe's Photoshop. Numerous other types of files are capable of being created or modified, edited, and otherwise used by one or more users for a typical data processing system. The large number of the different types of files that can be created or modified can present a challenge to a typical user who is seeking to find a particular file which has been created.

Apple's solution and invention relates to a method of compressing an index in one exemplary embodiment which includes first annotating and then encoding a list, commonly referred to as a postings list, in accordance with the annotation. The postings list identifies items containing a particular search term. The list is a type of inverted index that maps a term, such as a search term, to the identified items. Each item is identified using a unique identifier, referred to herein as an ITEMID. The ITEMID is numeric, and the items are typically listed in the postings list in descending numeric order by ITEMID. For more information, see the patent.

GP - 7,757,026 - Techniques for Transferring Status Information between an Accessory and a Multi-Communication Device

Apple's invention relates generally to multi-communication devices and more particularly to a connector interface system for such devices.

GP - 7,757,108 - Method and Apparatus for Implementing a Sleep Proxy for Services on a Network