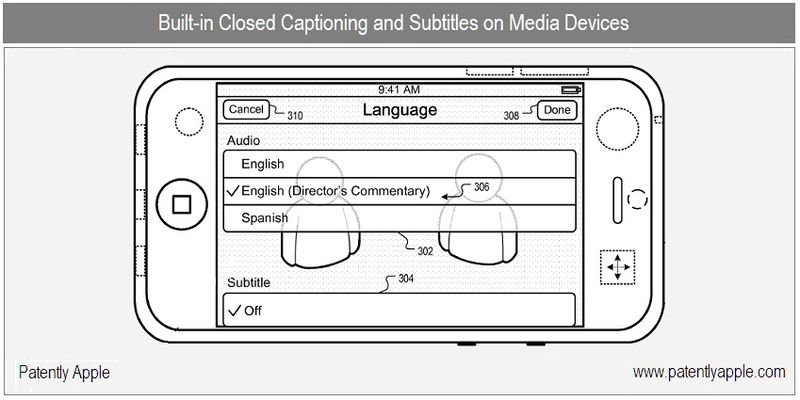 A new Apple patent published by the United States Patent and Trademark Office today reveals that Apple will be adding easy to use subtitle and closed captioning features to their iPhone and other media players such as Apple TV. The system will also provide users with the ability to control the look of on-screen subtitles by choosing font styles, colors, sizes and even the style of box the text will be presented in. Apple's last feature takes advantage of ambient noise technology so that closed captioning could be triggered automatically when a mobile user is watching a movie or TV show in a noisy environment such a subway, bus, park or gym.

A video could include subtitles or closed captions. The subtitles or closed captions could provide a translation or a transcript of the spoken dialogue in a video and optionally other information. Closed captions are useful to hearing impaired viewers. Subtitles are useful for viewing foreign language videos or for viewing videos in a noisy environment. Subtitles and closed captions are typically invoked on a mobile device by selecting an option from a menu screen. On some devices, navigating menus and selecting audio options can be a cumbersome process that requires the user to perform multiple actions or steps.

You only have to look at this long-winded solution to realize that it's not exactly an easy process to use subtitles on an iPhone (or other Apple media device) – and this is what Apple's patent provides a solution for including a rather interesting twist.

Ambient noise sampled by a mobile device from a local environment is used to automatically trigger actions associated with content currently playing on the mobile device. In some implementations, subtitles or closed captions associated with the currently playing content are automatically invoked and displayed on a user interface based on a level of ambient noise.

Apple's patent FIG. 2 shown below illustrates an example of content playing in full screen mode including an overlying and partially transparent navigation panel 202 or "heads up" display. The navigation panel could contain one or more navigation elements which could be used to invoke navigation operations on the currently playing content (e.g., video, audio, slideshow, keynote presentation, television broadcast, webcast, videocast). 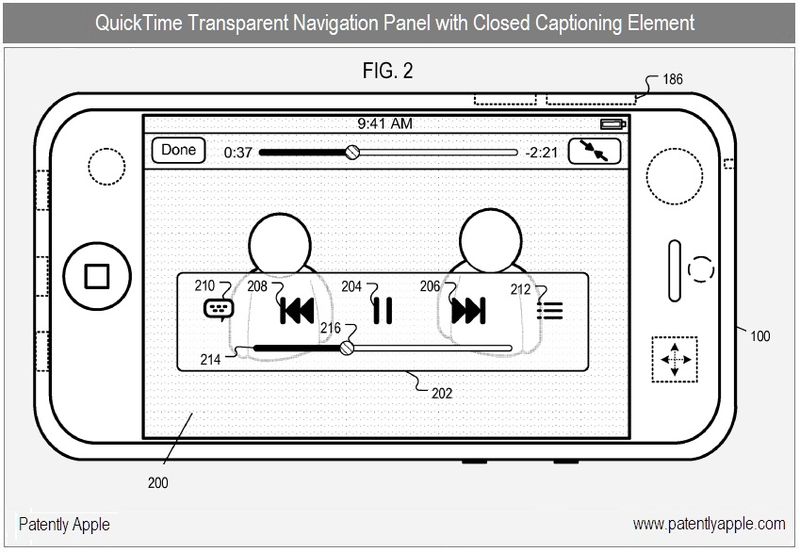 My iPod touch has the element 210 but it's for language, not closed captioning, and language is limited at that. So the element noted as 210 appears to have or is about to change to being a closed captioning element and element 212 appears to be the new element for language. Whether we'll see this in iOS 4 in a few weeks or so is yet to be determined.

The patent also notes that in some implementations, the video content could be a television broadcast, videocast, webcast, Internet broadcast, etc. In some implementations, the language option sheet described in reference to FIG. 3 below could be generated by a service (e.g., by a cable headend) or a set-top box which is likely referencing Apple TV.

Apple's patent FIG. 3 illustrates an example of a video played in full screen mode, including an overlying and partially transparent option sheet 300. The option sheet includes a display element 302 showing language options for audio associated with the currently playing video. In the example shown, the language options include English, English (Director's Commentary), and Spanish. Other languages could also be included as options (e.g., French, German). 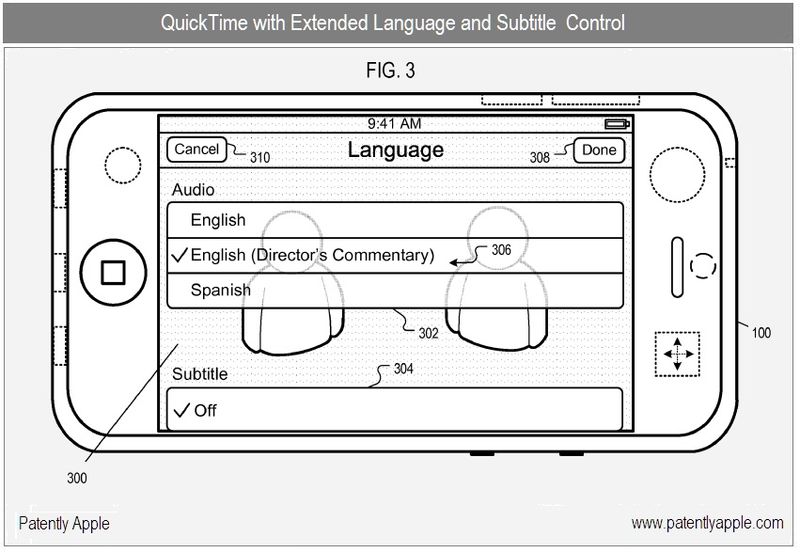 The option sheet also includes a display element 304 showing options for subtitles associated with the currently playing video. Options for subtitles could include options for color, fonts and styles for the subtitles in addition to language. For example, the user could select an option to show the subtitles in a frame surround the video (e.g., letterbox mode) or overlying the video (e.g., full screen mode). Those options will reside below the Subtitle box and the user will have to scroll screen 300 to access the options controlling fonts etc.

Example Process for Ambient Noise Based Augmentation of Content

Apple's patent FIG. 4 shown is a flow diagram of an example process 400 for ambient noise based augmentation of content. 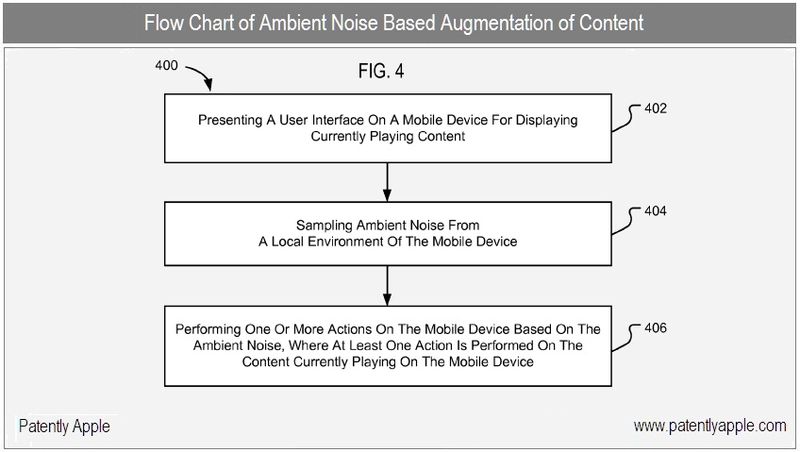 In a first environment (e.g., a gym), the ambient noise could be very loud and would require a large increase in volume or an invocation of subtitles. In a second environment (e.g., a shopping mall), the ambient noise could be less than the first environment and would require a lesser increase in volume and possible not an invocation of subtitles.

For mobile devices that include one or more sensors or controls (e.g., GPS, ambient light sensors, accelerometers), one or more actions could be triggered based on the ambient noise and/or input from at least one control or sensor. For example, the GPS system on your iPhone could provide position coordinates to your iPhone. One or more actions triggered by ambient noise received by a microphone could be recorded in a database, together with a descriptor for the action. So when a user is in a gym, and subtitles are invoked due to the loud ambient noise in the gym, the location of the mobile device is recorded. Each time the user returns to the recorded location, the gym in this example, the action is automatically performed.

Patent 20100139990 - Selective Input Signal Rejection and Modification: This is an interesting patent that generally relates to various types of complex multi-touch pad environments such as those used in Apple's MacBook, Magic Mouse or even the iPod's clickwheel where you have both touch and pressure or "Pick Sensing" technology working in unison.

For additional information on any patent presented here today, simply feed the individual patent number noted in this report into this search engine.