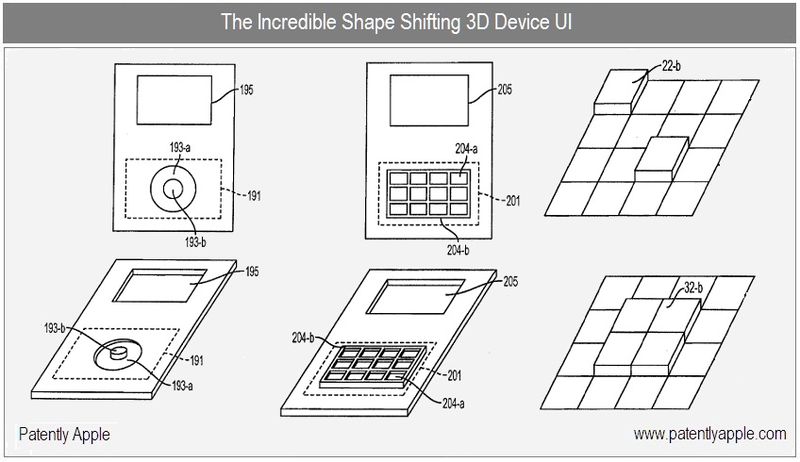 On June 24, 2010, the US Patent & Trademark Office published a patent application from Apple that reveals various concepts behind a newly advanced shape shifting device interface that could transform a flat interface into a physical 3D embodiment. It could create a physical tactile keypad on a future iPhone or iPod Classic interface and technically provide the iPad with a physical-like keyboard. This incredible concept is packed with wild concepts that could transform a device automatically by simply being in a room with a notable temperature change. The concept could alter an iPod Classic to be a TV remote with various buttons in a configurable interface that will blow your mind. This is definitely a candidate for patent of the year and if Apple ever gets this out to market, it's ball game over for the iPhone and iPod wannabe's of this world.


Touch screens and touch pads can typically have a smooth fixed outer surface through which inputs/outputs can be made. For example, the outer surface can act as an input mechanism that receives touch inputs such as taps, slides and other gestures. With touch screens, the outer surface can further act as a window for displaying text and graphics that change during use. In most cases, the physical surfaces of these devices can be smooth and fixed. In some cases, they can be flat and planar. They generally do not include tactile features like buttons and therefore can be used across many modes, applications or platforms. However, because these surfaces generally do not include tactile features, the user can have a difficult time locating UI elements without looking at the visual screen to ensure that the desired location is touched.


In the big picture, Apple's invention could very well be applied and marketed on a variety of their products including the iPhone, iPod and MacBook. As presented below, patent figures 54-56 illustrate a variety of shape shifting device applications. Such a device could be positioned within a touch sensitive zone, as noted below. Note: throughout this patent report the terms "shape change device" and "shape shifting device" or "change" and "shift" are considered to be one and the same.


The changing or shifting topography could define different user interface layouts. The user interface could, for example, be associated with input and/or output devices, such as touch pads, touch screens, and the like.


The topographical change or shift could be implemented by a shape changeable surface that could include one or more alterable nodes. The nodes could be altered either individually or in combination and be associated with certain user interface elements. For example, the nodes could be altered to define or form a physical or virtual button, a key, a navigation pad, a scroll wheel, and the like. In some embodiments, the nodes could comprise electromechanical devices that could move from one level to another to form raised and lowered regions of the user interface.


Apple's patent FIG. 1 shown below illustrates an exemplary user interface that could change topography having shape changeable nodes 12 to change the topography of the user interface. A topographical (or shape) change can be defined as a change in height, width, length, orientation, configuration, layout, texture, pattern, three-dimensional form, and the like of all or a portion of the surface associated with the user interface.


The nodes could include an actuator that could change between physical states, thus causing the nodes to change. For example, the actuator could include a moving member that could move the node from an initial state to a raised or lowered state or that could deform, rather than move, the surface in order to create a shape change. In so doing, the topography of the user interface could be selectively changed.

It should be noted that the surface could change in real time during the touch event. The change could be based on touch location, acceleration, direction, size and number of touch points. Basically, any characteristic of the touch event could affect the topography. 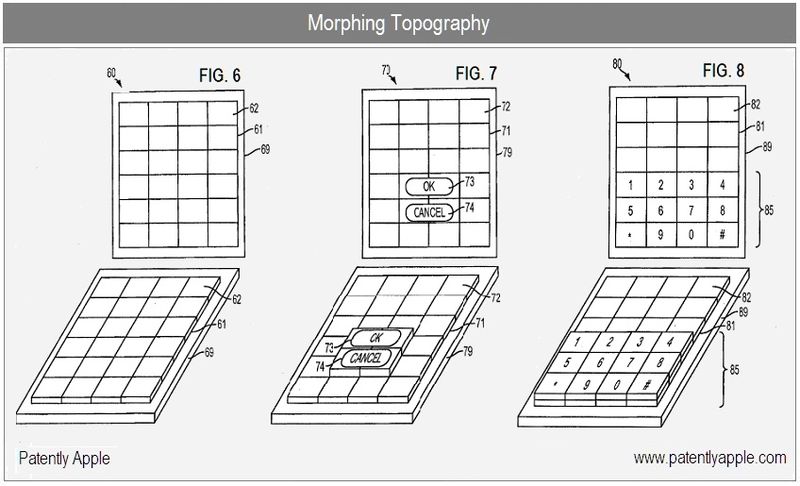 
Apple's patent FIG. 7 illustrates an exemplary touch screen having a user interface that could change topography to form virtual buttons according to embodiments of the invention. In the example of FIG. 7, touch screen 70 could have a desired user interface state in which the user interface could display two virtual buttons 73 and 74 in the display 79. As such, shape changeable nodes 72 overlaying the displayed buttons 73 and 74 could be raised on the surface 71, thereby informing the user of the location of the buttons to be touched. The underlying display 79 could display "OK" and "Cancel" user interface elements in the display regions corresponding to the raised nodes. A computing system could have functions associated with these displayed elements that could execute when the user touches the buttons 73 and 74. 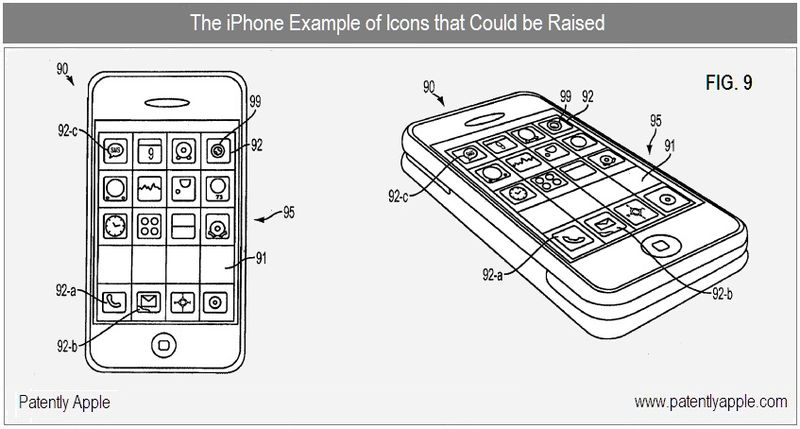 One example of a raised topography could be applied to the icons laid out on an iPhone or iPod touch. Interestingly, one of Apple's engineers slipped in a version of the iPhone that is interesting. The design shows a model with a physical keyboard lid. Is this engineering humor or insight? 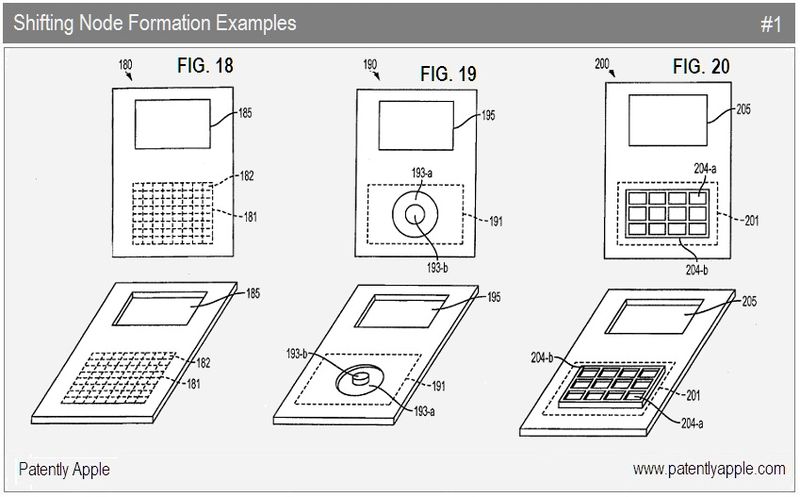 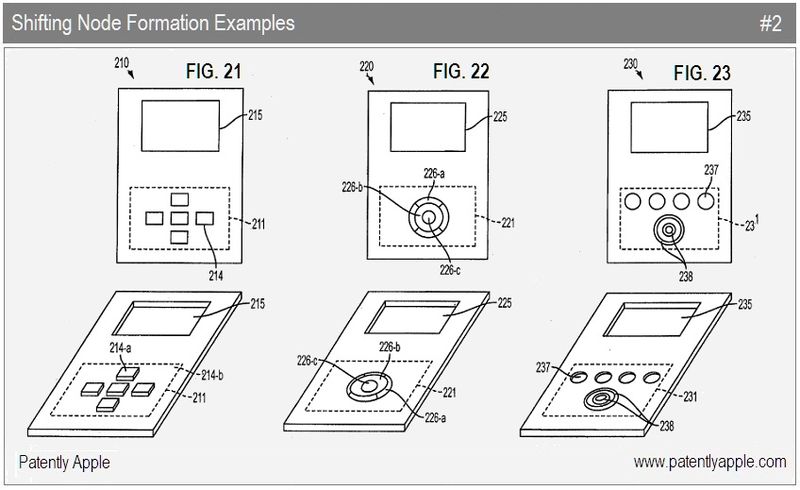 
In the example of FIG. 24, user interface 240 could include a plurality of selectable shape changeable nodes 248 spread about a surface 241. The surface could be made of a membrane of flexible or deformable material, e.g., elastic, silicone, soft plastic, or materials that can temporarily deform into a discrete shape or form before returning to its original shape or form, with a front side that can receive a touch and a back side opposite the front side that can receive change from the nodes 248. 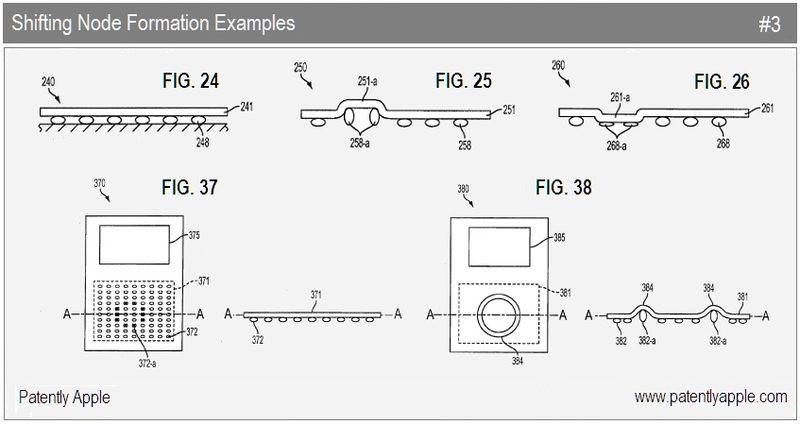 The patent goes on to state that the actuators could be made up of shape changeable material (symbolically illustrated by the circles in FIG. 24), such as nitinol, piezocrystals, and other suitable materials that could elongate, shrink, or rotate to change shape. Generally speaking, shape changeable materials change their shape upon a stimulus such as electric current, magnetic, light, pressure or heat as is noted below. Wikipedia states that nitinol is considered a shape memory alloy or "smart metal" that is used in areospace applications.

Shape Shifting Based on Room Temperature


In Apple's patent FIGS. 37 and 38 we see exemplary touch pads having a user interface that could sense a touch or near touch and change topography according to embodiments of the invention. In the example of FIG. 38, touch pad 380 could similarly have a series of nodes 382 that could change the shape of surface 381 to form circular scroll wheel 384. 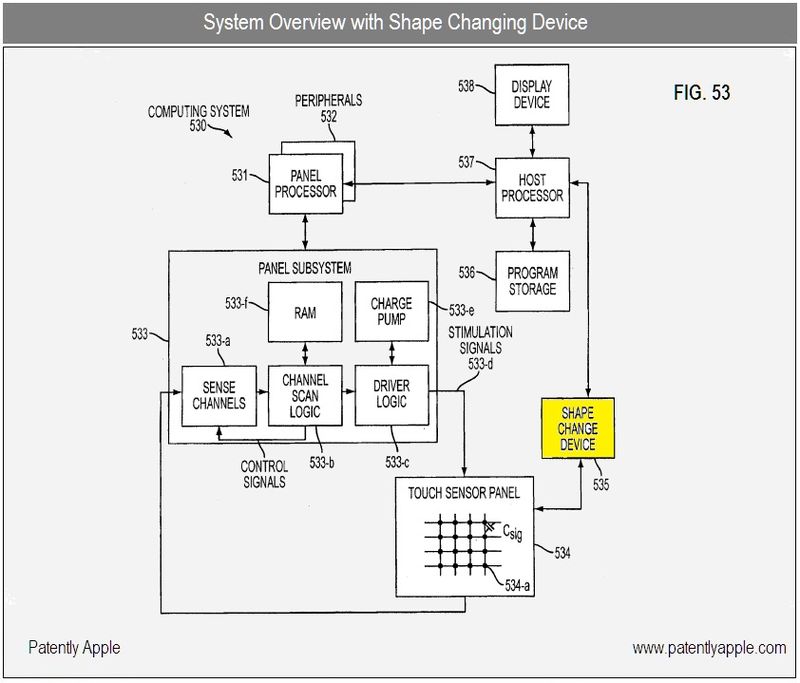 This patent could be a game changer - especially for the iPod Classic perhaps. The majority of the examples that Apple has presented in this patent are a glove fit for the iPod Classic, even more so than the iPhone. This way the lower section of the iPod could be utilized to morph into several devices and breath some new life into the middle iPod that's at bit of a loss for direction. It would be easier to morph a plastic material into various configurations tthan it would glass - especially the new gorilla glass that Apple has just implemented in their iPhone 4. The same would be true for a morphing MacBook trackpad area. At the end of the day, these are the likely areas that Apple may first pursue with this technology.

PA 20100156818 - Multi-Touch with Multi-Haptics: Once you've delved in the patent noted above, coming down to earth with a more tame look at multi-haptics is, well, a bore. Yet Apple is likely to implement some of this technology prior to leap frogging the industry with its shape-shifting technnology that takes haptics to an all new level. Techies may enjoy this patent.


PA 20100156184 - Battery Charging System for Mobile and Accessory Device: Apple's patent generally relates to a method and system for recharging batteries for wireless electronic devices. The system includes a host machine providing a plurality of charging slots and a plurality of wireless devices coupled to and powered by a plurality of batteries. Apple was granted two patents covering this invention in March 2010.


Notice: Patently Apple presents only a brief summary of patents with associated graphic(s) for journalistic news purposes as each such patent application is revealed by the U.S. Patent & Trade Office. Readers are cautioned that the full text of any patent application should be read in its entirety for further details. For additional information on any patent reviewed here today, simply feed the individual patent number(s) noted in this report without prefix into this search engine. About Comments: Patently Apple reserves the right to post, dismiss or edit comments.

Our Report is also Covered By: MacSurfer, Apple Investor News, 9 to 5 Mac, MacDailyNews, Applesfera Spain, imjustcreative, MacKozer Poland, The New York Times Bits (What We're Reading), MacNation Denmark and more. Our report is also included in a report by Jonny Evans being covered by both Computerworld and MacWorld.

Sounds plausible. Thanks for the contribution.

I have a reason to believe that this shape shifting interface will not go to the iPhone/iPod/iPad as the patent images show, but to the future iMacs with touchpad. Probably Apple shows it with the mobile devices to divert the prying eyes of competitors. :)

If this patent ever makes it to production, an amazing touchpad that becomes keyboard might come out of it.

This will mean we're gonna have all the advantages of a touchpad plus a hardware morphing keyboard for productive typing.

Tellrad did it in Israel 50 years ago in telephone routing equipment designed to be used by blind telephone operators. It worked. By law telephone operator jobs were reserved for the blind, war veterans as well as visually impaired because other reasons. The user interface consisted of buttons with a rising cylindrical center. The operator felt the console to receive information and was able to flatten the rising cylinder as well as push the button. One advantage was that at the time (before screens) operators had to listen to the calling party in order to obtain information that blind operators received faster by touch. Blind people who took those jobs ended up memorizing institutional phone book and recognizing the voice of everyone in the organization.

It makes sense to have the UI switch interfaces and raise/lower for the active object you want to message. Virtual interfaces galore can be created with this design patent.

I could see how this could become a new API for the developers to play with, along the same lines as the current iPhones have accelerometers, gyros, etc. This really would change the iPhone into the platform of a developers wet dream -- imagine the possibilities in games and apps!

Whoa, Rikki, you hit that one out of the park! Good eye. I was wondering, as did the author, what Apple was doing with slipping in that design. Now the idea is down to earth and more likely to be something we may see in the future. Thanks guy.

Figure 9 is the key. The design on the right with what you think is a slideout keyboard is where the secret rests. It's not a slideout keyboard, it's a slide out shape shifting or morphing surface. One that could be a keyboard or game pad or TV remote or other preconfigured or custom device controller. The key to this rests with Figure 9. Number 9, number 9, number 9. Well that's what my crystal ball tell me :)