New Functions & Marketing Twist for Apple TV in the Works 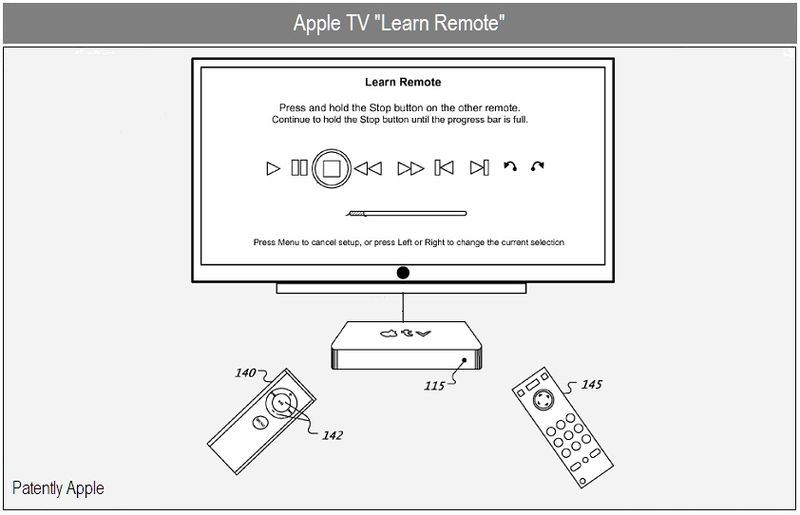 On May 20, 2010, the US Patent & Trademark Office published a patent application from Apple that reveals one of the next chapters for Apple TV. While Apple TV is considered to be a hobby device for Apple, the fact is that they continue to evolve the device in their labs. This particular patent covers Apple TV's proposed function simply called "Learn Remote." Apple TV will be able to be controlled by future HDTVs from Sony, Samsung and Hitachi or even a DVR from DirecTV. Yet for the most part, these functions are already found and explained on Apple's website. The second aspect of this patent involves a possible winning marketing twist that could involve Apple TV being able to present a "Simulated iPhone" on a future HDTV so as to allow users to make a phone call or perhaps better yet, interact with one of a Gazillion iPhone Apps or even access one of their new iBooks. Apple tries to hide this feature by illustrating its presence on an illustration yet refusing to elaborate on this point. That's fine, I just did and I'm sure that your imagination could think of other interesting spin-off possibilities for this powerful marketing twist. 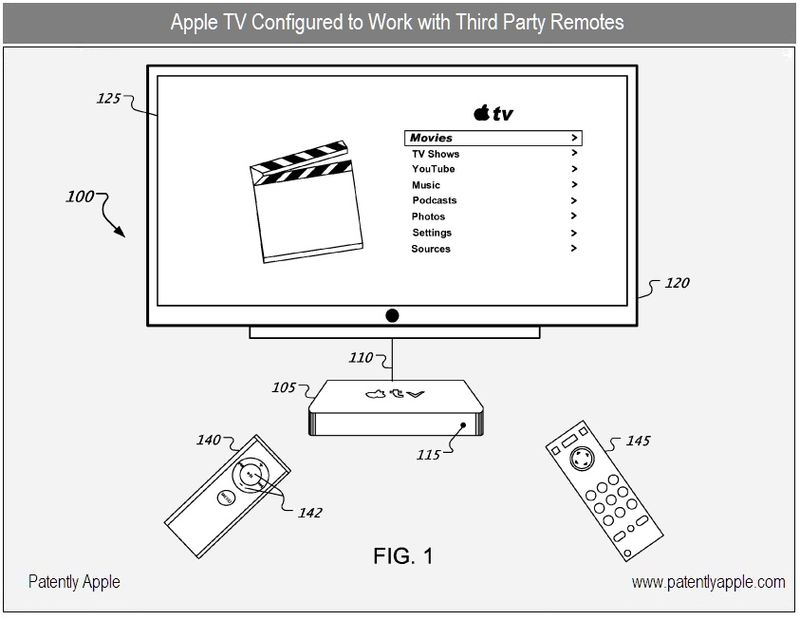 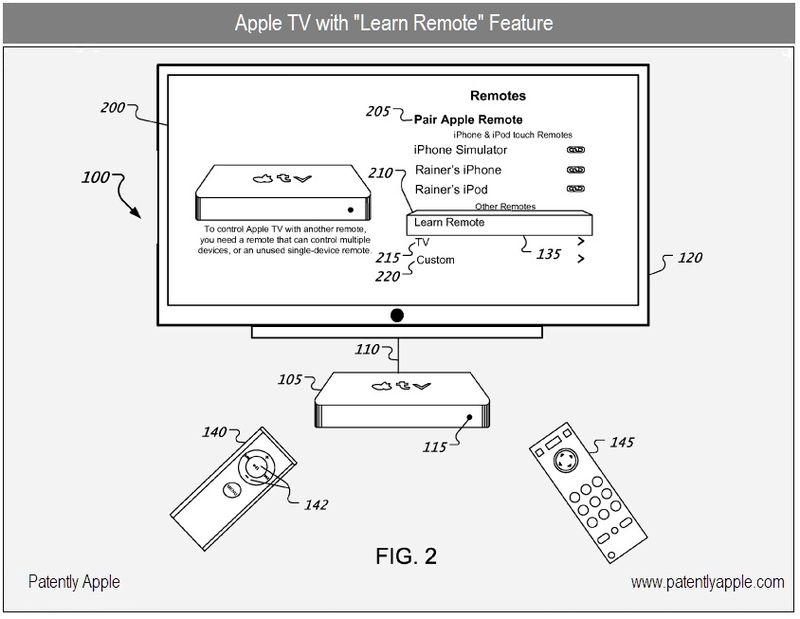 A very interesting point that is clearly visible in FIG. 2 above isn't highlighted in the patent verbiage whatsoever. Under "Pair Apple Remote" in FIG. 2 we see iPhone Simulator. While the iPhone and an iPod touch could become remote controllers for Apple TV, what is an iPhone Simulator? Well, Apple discussed this in an August 2009 patent application. It was my hunch at that time that iPhone simulation would go far beyond being a tool for developers and become a means of being a simulated on-screen iPhone for consumer devices such as the iMac. In this case, the iPhone simulation could be presented on an HDTV. This marketing twist could be very powerful for Apple in the consumer space if Apple TV would ever go beyond the hobby phase at Apple. 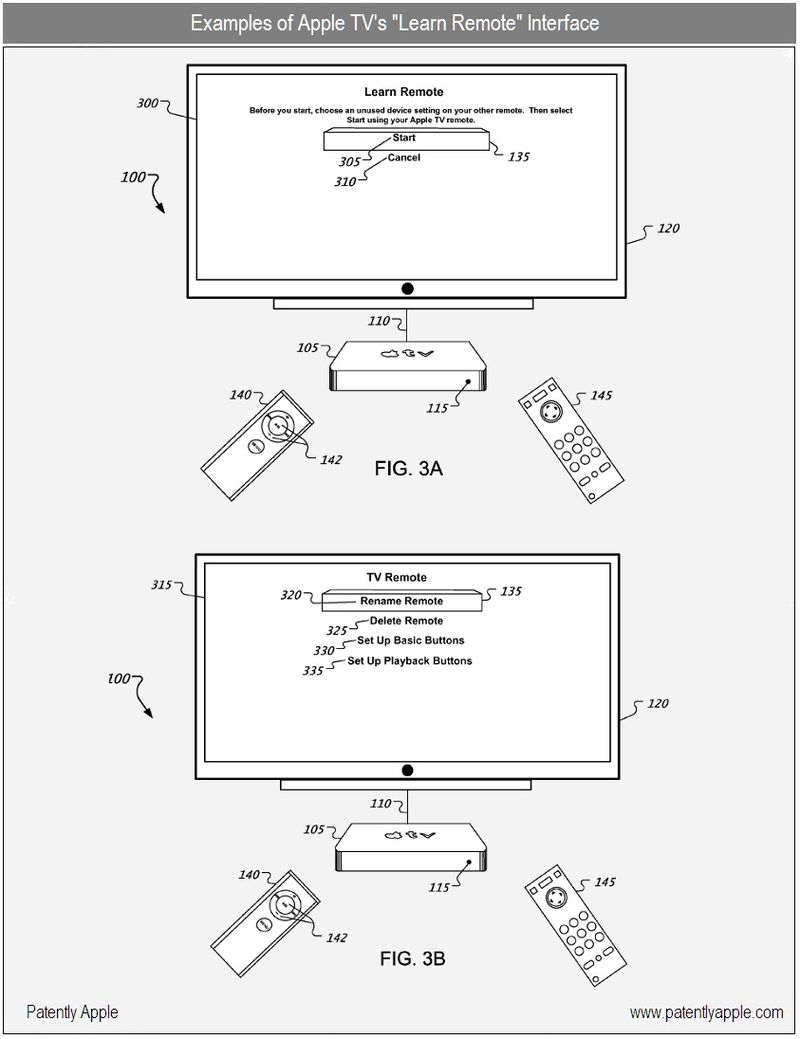 Apple's patent FIG. 4 shows a basic button interface 400 presented by Apple TV. The basic button interface could be presented in response to input accessing the start option 305 of the "learn remote" interface 300. The basic button interface includes instructions (405) indicating which control is to be actuated on the secondary controller being learned, such as the secondary controller 145. For example, if the UP navigation button is being mapped to a corresponding command-signal, the message "Press and hold the Up button on the other remote. Continue to hold the Up button until the progress bar is full" could be displayed. However, any control can be designated as the Up button. For example, if the secondary controller doesn't include an Up button, a different control that will not be mapped to any other media processing device 105 function could be designated. In some implementations, an audio instruction can be presented in conjunction with or in place of the on-screen instructions 405. 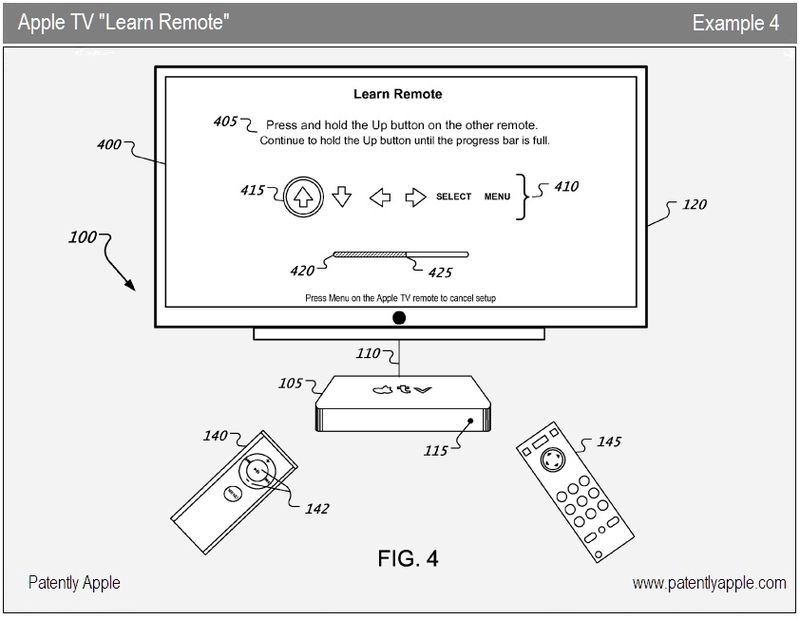 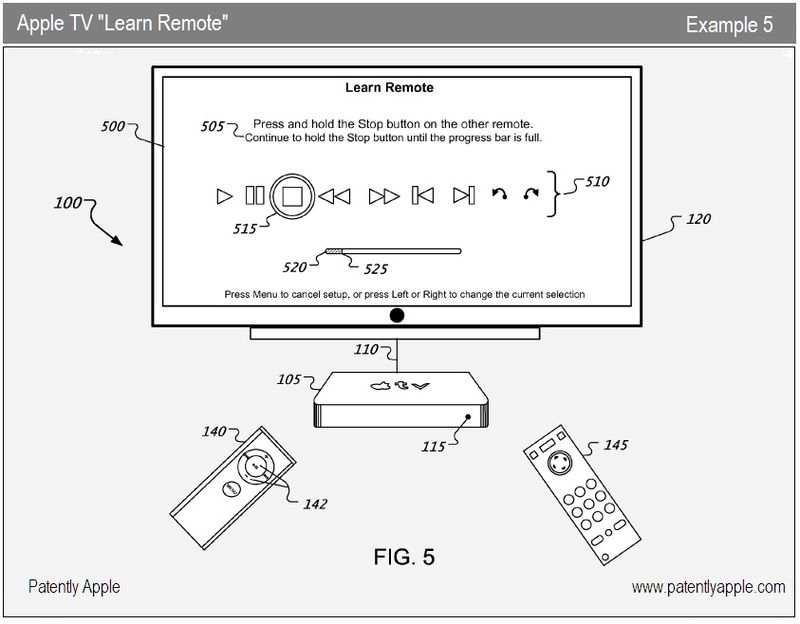 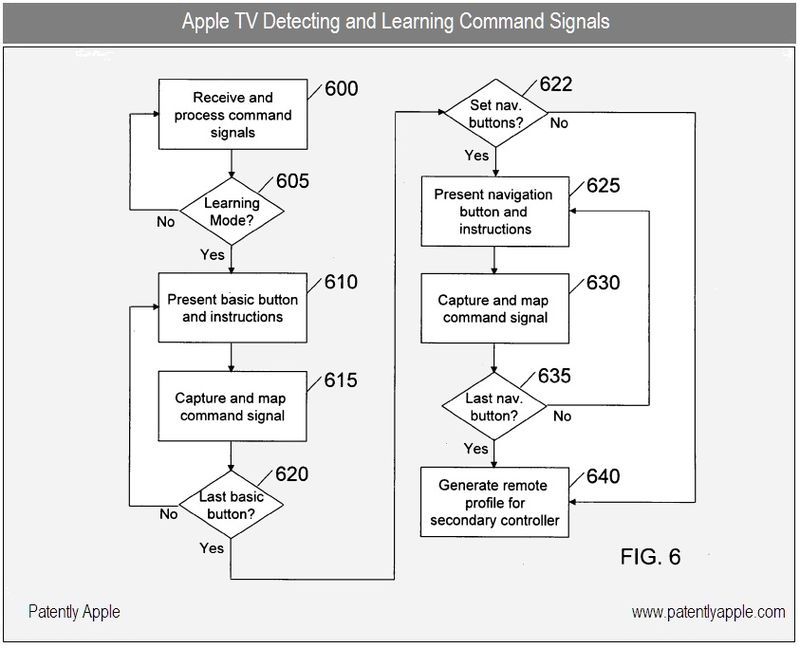 Apple's patent FIG. 10: A table 1000 includes a series of entries for a variety of different protocols. For each protocol, a pulse count is provided in one column along with an indication if phase encoding is implemented (in a second column). As represented in the table 1000, some of the protocols have multiple pulse counts that are acceptable, to indicate commands of different lengths. When scoring PDE protocols, if the pulse count of the IR signature matches any of the multiple pulse counts that are acceptable, the protocol is given a matching score. 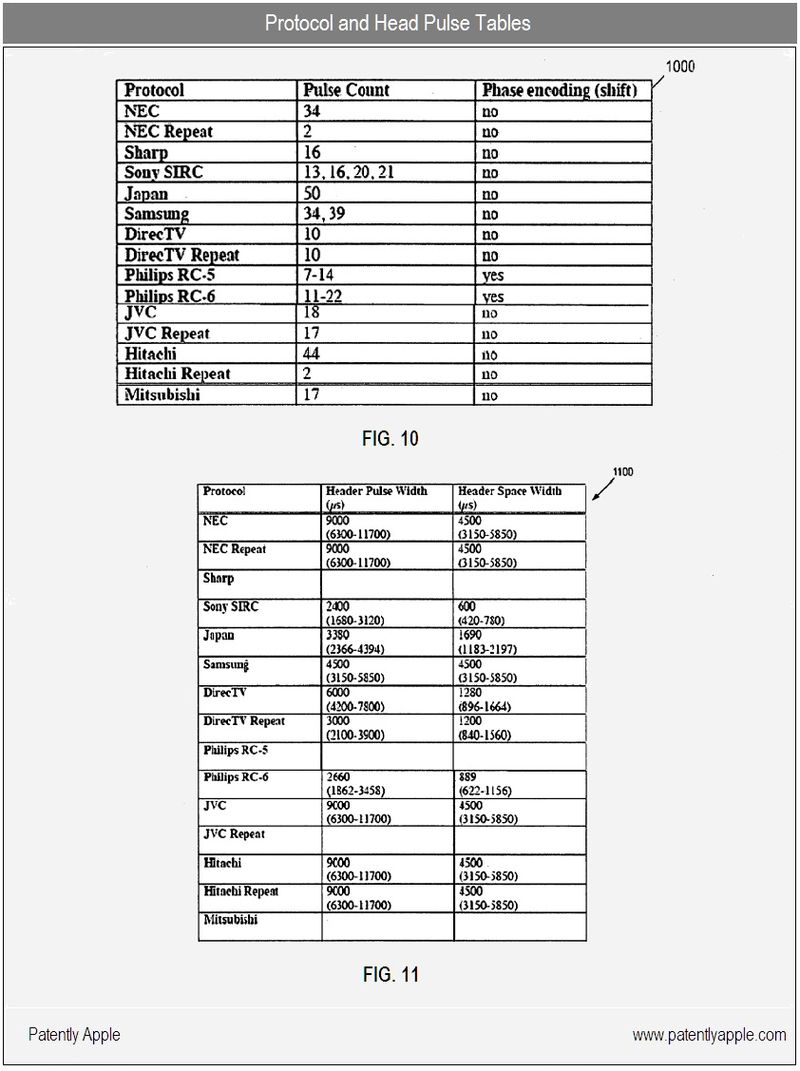 Apple's patent FIG. 11: A table 1100 provides head pulse width ranges and header space width ranges that could be utilized by the remove-control driver 700 for comparing with an IR signature and to score the corresponding listed protocols.

The Patent Behind Apple's Maps + Compass: Techniques for Manipulating Panoramas 20100123737 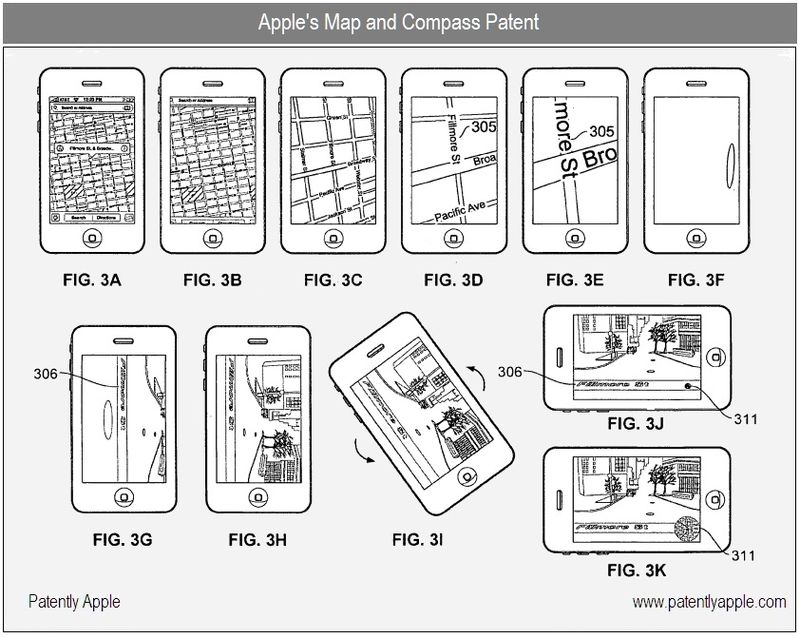 Verbiage from Apple's Maps + Compass Webpage: Change your view. Maps on iPhone lets you switch between map view, satellite view, hybrid view, and street view. And you can always double-tap or pinch to zoom in and out on a map.

Apple TV is really nice because it works with virtually all IR remotes. And because the Apple remote has so few buttons, it's really easy to map.

It would be even nicer if it supported Bluetooth device learning and not just IR. That way it would support game controllers as I imagine games on ATV would make Apple enter the console market.

I think apps on the AppleTV would definitely be fun and make sense. In any case, can't wait to see where Apple is taking this product. Right now I wouldn't buy one, but I think there is HUGE potential for AppleTV.

This isn't a "Screenshot" in the classic sense, Jaw. It's a patent Figure that is drawn. Hence your theory is incorrect.

Or you know it could be the engineer at Apple that took the screenshot that the patent drawing is based on...

Good catch on the iPhone Simulator.

I read the referenced "developer" patent. I believe that the developer advantage is too narrow to implement it for that purpose alone:

-- you can already simulate single touch and pinch gestures using the mouse and kb
-- if you, as a developer, have a remote device (iphone) capable of multitouch, why not just install your app on the device
-- eventually, you will need to install on the device, anyway

However, I do see great value on running an iPhone/iPad simulator on a the desktop or on an HDTV via AppleTV.

Now, if Apple were to remove the latter restriction, you would be able to run any app you purchased on the desktop or HDTV.

I have advocated this capability for quite a while.

It would be really appealing to be able to run any of the apps in the app store as widgets on the desktop:

-- for evaluation of app you are considering for purchase
-- to run the actual app, standalone, on the desktop in addition to running it on the device
-- to demonstrate or document features/problems with an app using screen capture, video capture, and annotation

The above, could be done without the need for any remote, multi touch device.

For other uses, you could display a multi-user game or collaborative document on a large screen TV or Video Wall. Each participant would use his multitouch device as a remote for his participation.

With an iPhone or iPod Touch, likely, the users would provide multitouch gestures using the device while looking at the large display.

With an iPad, the device could mirror the content of the large display on the device-- and the user would participate by gesturing on the device while looking at the device's screen.

There already is at least 1 app that does this within the iPhone OS ecosystem: Scrabble!

The iPad can display the board, and players' iPhones display their tiles;

There would be great potential for app developers and content providers in fields such as: entertainment; education; medical; artists/creatives; business presentations, etc.

So, yes-- running the iPhone/iPad simulator on the desktop and/or TV would be very attractive to app users and app developers, alike!