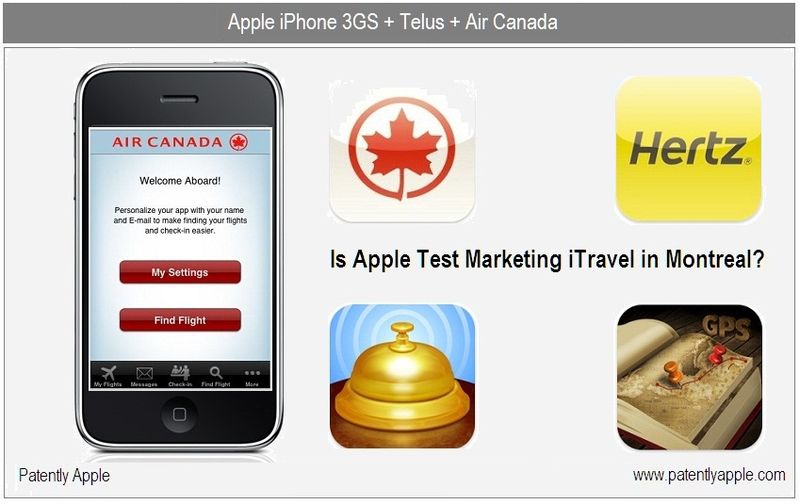 On April 21, 2010 Patently Apple presented a report on an a high profile Apple patent relating to the travel industry which covered an iPhone application called iTravel. It's been the buzz of the travel industry ever since. The timing of the report couldn't have been any better, considering that the Travel Distribution Summit is set to begin on June 17, 2010 in London. One of the noted keynote topics at this year's Summit covers "How to build the perfect travel app." Well, with Apple working diligently on iTravel - the perfect travel app may already be in waiting. In fact, it appears that Apple is currently in the process of test marketing some aspects of iTravel with Air Canada in Montreal. The limited test market is covering five travel destinations: Montreal, Vancouver, Toronto, Paris and yes, London – where the travel summit is set to take place. In a coordinated ad put forth by Air Canada, Apple and Telus in Montreal's English daily newspaper called the Gazette on April 29, 2010 – we're able to see Apple's iPhone with various iApps coordinated for the busy traveler. The service is initially using a 2D Matrix barcode system which was covered in Apple's patent – as was the concept of the "unmanned baggage kiosk." That's kind of buzz, really, to see Apple's April patent in action so quickly, even if it's only in-part: But Shhhh, it's a secret. 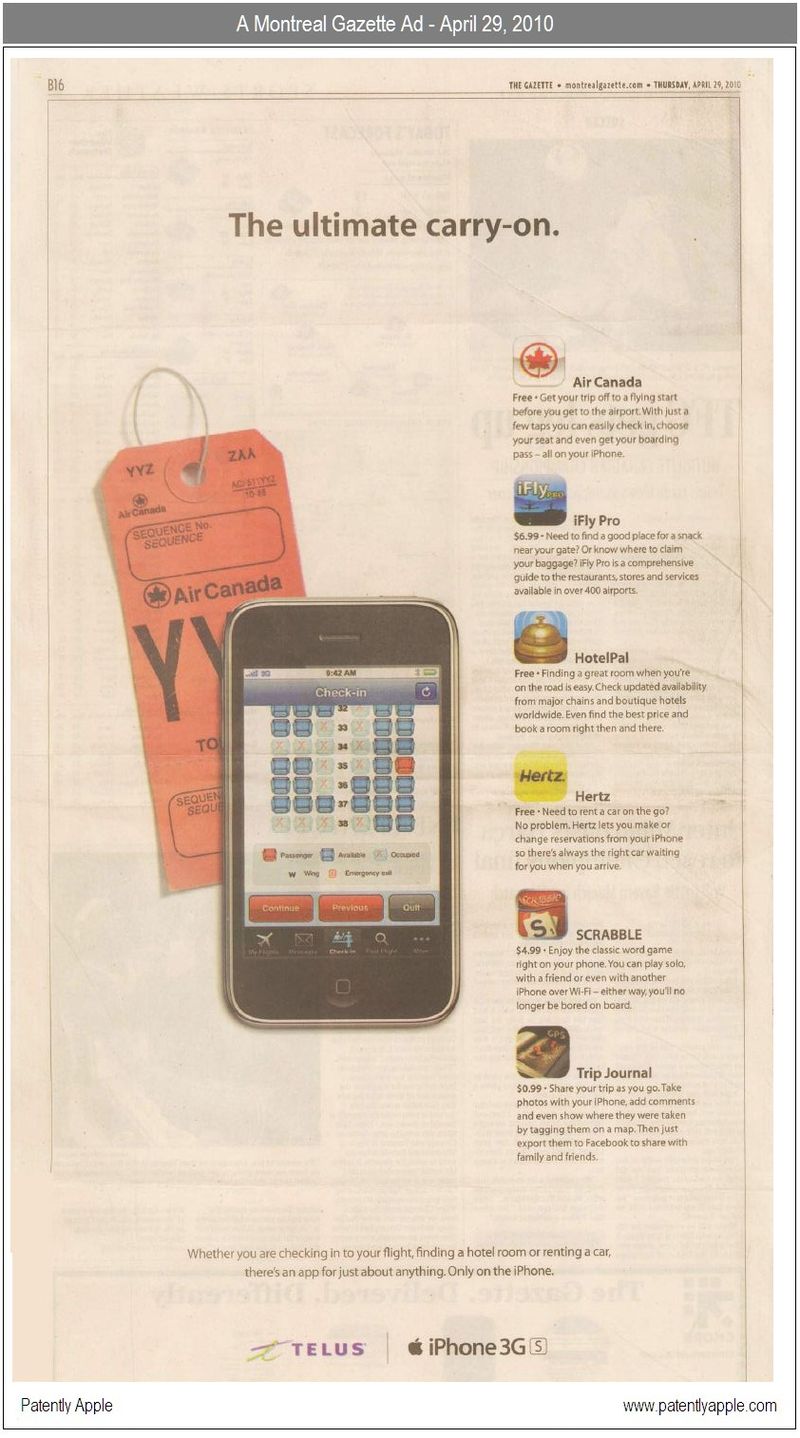 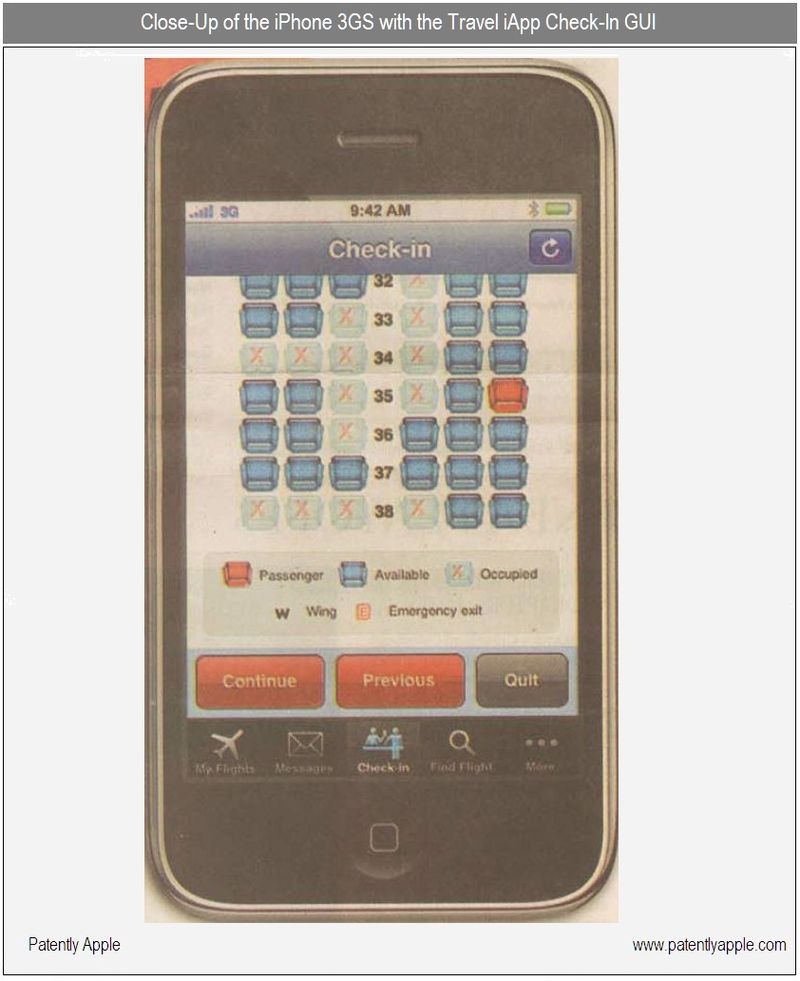 Patently Apple Update: New Close-up scan of the Travel iApp's Check-In GUI shown above as well as a new scan of the Montreal Gazette newspaper posted at 9:30 AM May 4, 2010.

The ad that's shown above is clearly promoting Air Canada's new iApp for Apple's iPhone 3GS. From what we could see of it, it's following some of the very content that was covered in Apple's patent. Things like the electronic "Check-In" button which covers an electronic boarding pass, or the "Find Flight" feature button which covers the patent's "Search for Flight" feature.

The last button on the bottom bar is simply titled "More." It's likely an open button to allow the traveler  to add other iApps that serve their total travel requirements and be able to contain them under the one iApp from the Airline. The traveler would add iApps like those covered on the right side of the newspaper ad covering "iFly Pro," "HotelPal," "Hertz," and "Trip Journal," – which are available on iTunes.

The ad also shows us that when the traveler is "checking in" they'll be able to choose their seat right from their touchscreen iPhone so that they could simply touch the seats they want to reserve and voila – it's done: Very cool.

Lastly, one has to wonder if iTravel is really more of a Generic Framework of sorts that would allow any Airline to take advantage of immediately; A framework or system that would even be ready for NFC ready Airport terminal equipment - when the technology finally arrives. If it's a framework, then it would make it simple for any Airline to set it up for the iPhone in short order. They would simply choose their own set of promotional-partners covering car rentals, hotels and service iApps and promote it as a bundle for travelers.

While the jury is still out as to whether iTravel will finally play out as an Apple iApp or an Apple software/hardware framework is still to be determined - but the Air Canada model that we're seeing here may very well be pointing the way. Only time will tell which of the two it is.

The Air Canada website states that "Air Canada introduces a new application, specifically designed for Apple iPhone users, to make travel easier than ever! So, no matter if you want to check in for your flight, verify you Flight Status, sign up for real-time Flight Notification updates, or take advantage of one of the other options available, the Air Canada iPhone App has you covered.

Mobile Check-In: Check in to your Air Canada flights from wherever you are! Simply visit mobile.aircanada.com and select the Check-In option. You can receive your Electronic Boarding Pass directly on your mobile device or confirm your check-in to secure your seat on the plane.

My Messages Service: Manage your Air Canada travel experience from a single location. With the new Air Canada My Messages inbox, you'll get your Electronic Boarding Pass and Flight Notification updates that you registered for, all in one place. This would seem to be where Telus comes into the picture in Canada and AT&T in the States when this program rolls out.

Notification Services: Flight information delivered directly to your fingertips! You can now have your flight schedules, cancellations, delays and details sent directly to your mobile device or e-mail as they occur, all in real time.

Other features of the iApp will allow travelers to book/reserve car rentals and so forth.

Another key feature of the iTravel patent covered unmanned baggage kiosks. Air Canada's literature covers such a feature. Air Canada offers quick and convenient Self Tagging/Self-Service Kiosks which allow travelers to print and attach their own baggage tags and then deposit the baggage at Baggage Drop-off Counters.

The service is being test marketed in Montreal, Toronto and Vancouver in Canada as well as in London and Paris. Such bar codes were covered in the iTravel patent as well as a secondary related patent in more detail under FIG. 9.

Near Field Communications (NFC): On the Horizon

The Near Field Communications aspect of the patent is likely to be utilized a little further down the road as market leaders such as Apple familiarizes the public about how to use and feel comfortable about such technology on their iPhone. At present, there are no North American mobile phones equipped with NFC even though it's been used on phones form the likes of DoCoMo in Japan for years.

With that said, let it be known that some Android based phones will be introducing this feature sometime this fall, according to NXP. According to Henri Ardevol, general manager of secure transactions at NXP Semiconductors who spoke with NFC World on April 23, 2010, the "First phones will be available this year and some more [in the] first half of 2011."

It's nice to know that a simple Apple patent report could freak out so many of Apple's competitors. They seem to be jumping at the mere presence of Apple's shadow of late: Boo!

The remaining question is, what will they do now that Apple's iTravel is in the test marketing phase?

A Note to Facebook Fans:  Patently Apple is temporarily adding the Facebook "Like" button to our right side bar as a test. If you want to know more about this feature, see this Cnet report. If Facebook Fans like this feature, then make it known to us by participating or providing feedback either through our contact form or in our comment area. Feedback relating to the feature sent via our comment system won't be made public. The feedback is a private matter. Thanking you in advance for your cooperation.

I am checking in with the app today. The seat reservation changes seem to work. We will see about international aspects of the app as well tomorrow.

Now if we can just get the airline staff to stop insisting that passengers turn off their iPods.

This is very interesting indeed. The fact that Apple has to work with both partners to make sure that the airline, car rentals, hotels and service notification and verifcations from the telecom all work seemlessly together via the iPhone isn't just about Air Canada's iApp. The unmanned baggage handling was covered in the iTravel patent and here we're seeing it in action etc, is very cool. NFC would be cool too, but that's an Airline's descision. It'll come in time.

@Gazoobee: I almost agree with you - Ha! Americans aren't fans of AT&T and we're not fans of Telus. That said, it's Air Canada and Telus leading the way here, so two thumbs up for their leadership.

It looks like the KDDI Ubiquitous solutions, that you wrote about a few years back, are on the verge of becoming a reality. I googled your posts but they appear to be lost in the ether.

Anyway, who would of thought that an Apple iPhone [yet to be invented] would be the "Ubiquitous" device?

Congrats on the site!