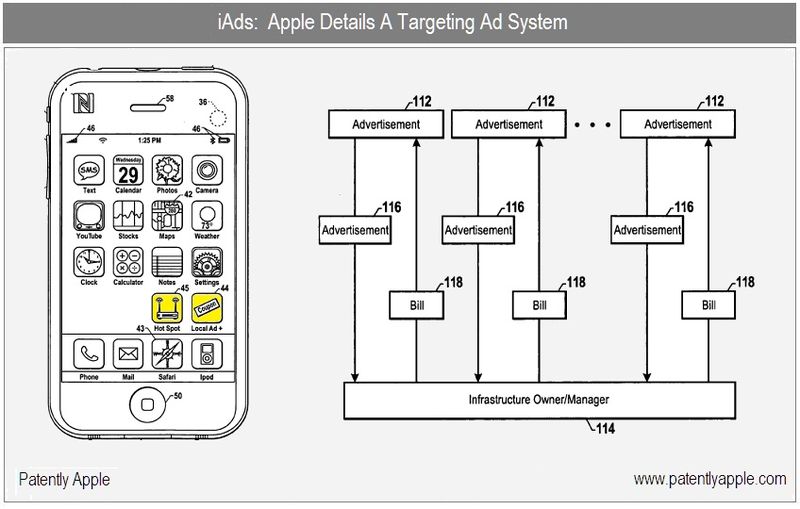 On May 20, 2010, the US Patent & Trademark Office published a patent application from Apple that reveals various concepts behind a newly advanced targeting advertising system that is likely associated with Apple's forthcoming iAd service. Apple's patent generally relates to providing dynamically priced advertisements to all manner of electronic devices. The new targeting ad system describes relationships between advertisers, an infrastructure owner and a user that may be the target of advertisements from the advertisers. The heart of the patent details the system itself and then provides us with examples of how it will be implemented. Many of the scenarios involved in the patent are based on a future iPhone with built-in NFC capabilities. 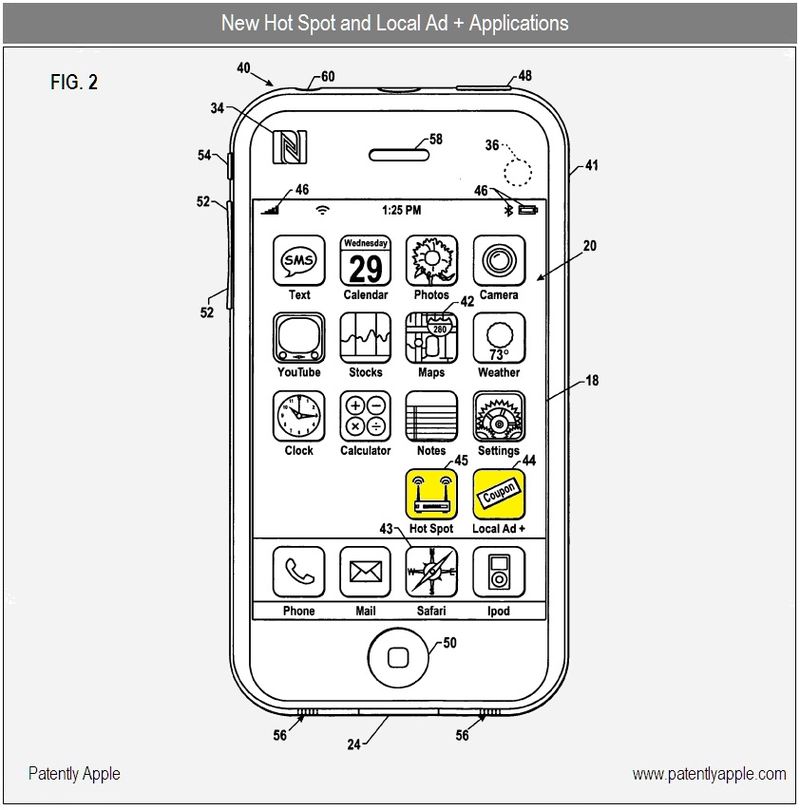 As noted above, some embodiments of the iPhone may include the NFC interface 34 in addition to including camera 36 that could be used to obtain a digital image. The iPhone may thereafter employ optical character recognition (OCR) software, barcode-reading software, or matrix-code-reading software to extract information from the image which will come into play later in this patent.

Whether this dynamically-priced ad system is actually a part of Apple's forthcoming iAd system is unknown at this time though it would be sufficed to say that the two systems will likely be closely associated with each other. This ad system is the heart or core of Apple's patent. 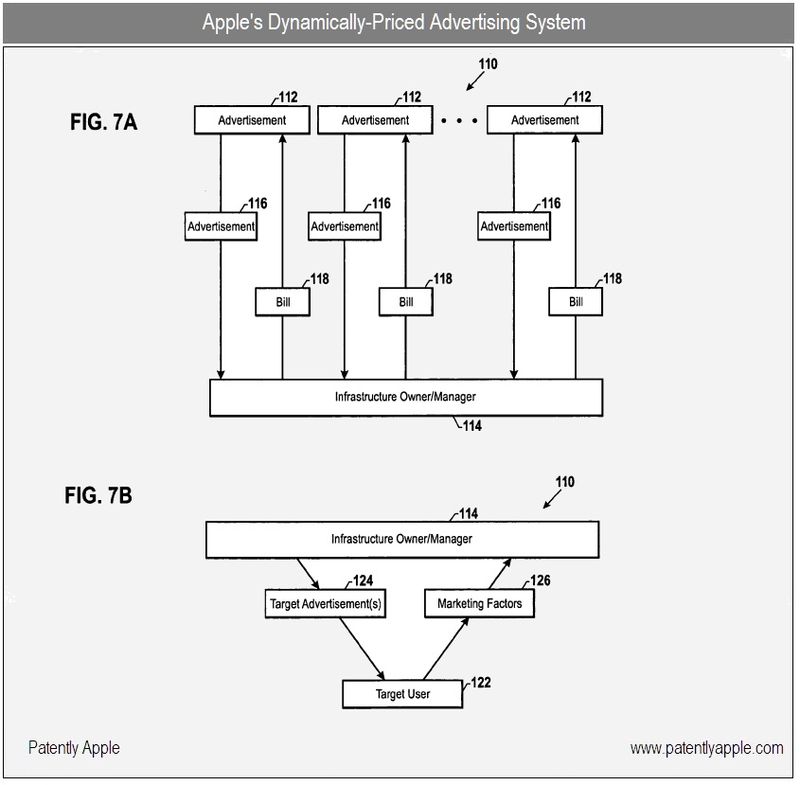 The Electronic Advertisement or iAd 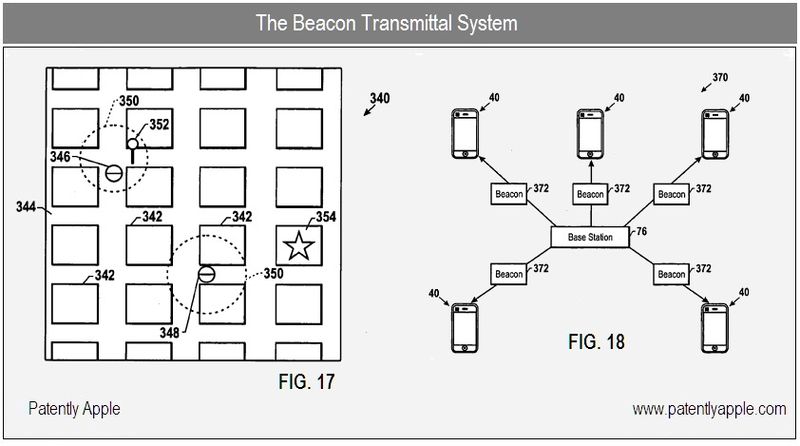 Apple's patent FIG. 18 presents a beacon transmittal diagram 370 which illustrates a manner in which an infrastructure owner or manager controlling a wireless base station 76 may reach target users having an iPhone or iPod touch. In the diagram 370, the base station may transmit a wireless beacon 372 to any number of handhelds. The base station may be in any location, such as the first or second subway stations 346 or 348. The data transmitted by the beacon may be received by the handheld devices and in a variety of ways. For example, the beacon may include a web archive file representing a target advertisement 124 or may represent a link to a website where the target advertisement may be obtained.

When the wireless beacons reach one of the handheld devices, the devices may display various notification icons, as described below with reference to FIGS. 19-20. Such notification icons present a user with the opportunity to view items of potential interest.

Apple's patent FIG. 19A shown below illustrates a home screen 380 with a web browser application icon 43 that may include a message notification icon 382. The message notification icon may denote that messages may have been received in a wireless beacon from a nearby base station. If a user selects the web browser icon 43, the iPhone may display a screen 384, as shown in FIG. 19B. The screen 384 may represent a web archive file received in the beacon or may represent a website displayed from a link received by the beacon. For example, a link to a subway map, and a link to various target advertisements. One such target advertisement may advertise a sandwich shop; another may advertise reserving theatre tickets over the Internet. 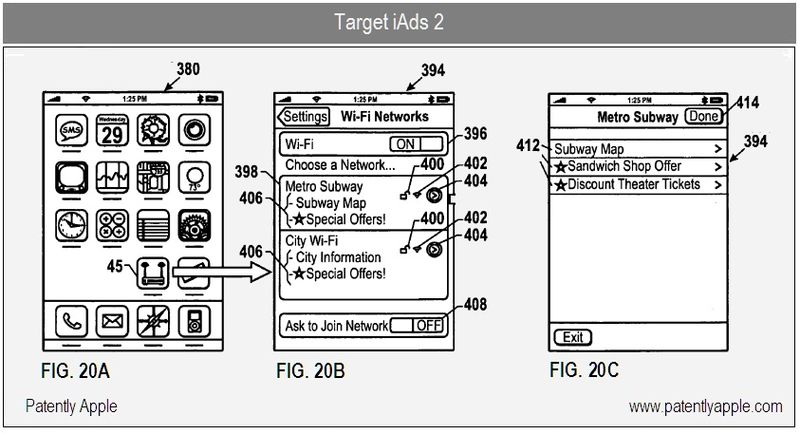 If the user selects the list item advertising the sandwich shop, the iPhone may retrieve additional information from the Internet or may load additional information from a web archive file received from the beacon. As illustrated in FIG. 19C. The screen 388 may represent, for example, a coupon for a free drink with the purchase of a sandwich at a restaurant called "Sandwich Shop." The screen may include, for example, a matrix barcode 390 encoding a serial number to obtain the stated discount. A button 392, labeled "Send to Friend," may enable a user to forward the advertisement to another friend while simultaneously informing the infrastructure owner or manager that such action has been taken by contacting the base station or an affiliated web service. In addition to providing the matrix barcode, the iPhone may also prepare to transfer the same information encoded in the matrix barcode via near field communication if the user taps the NFC interface of the iPhone to a kiosk or cash register configured to receive such information. 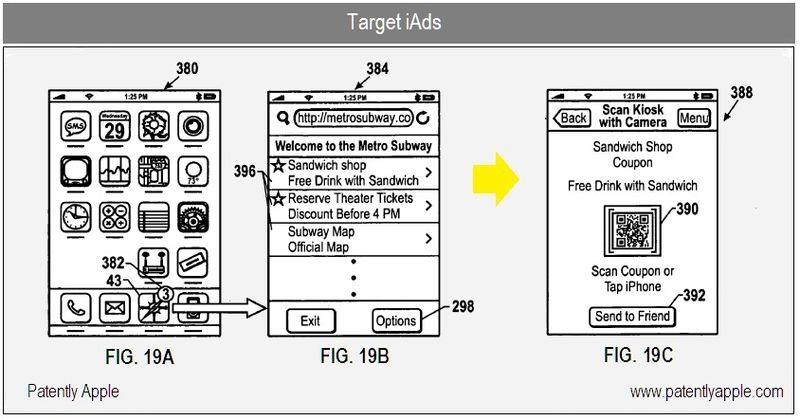 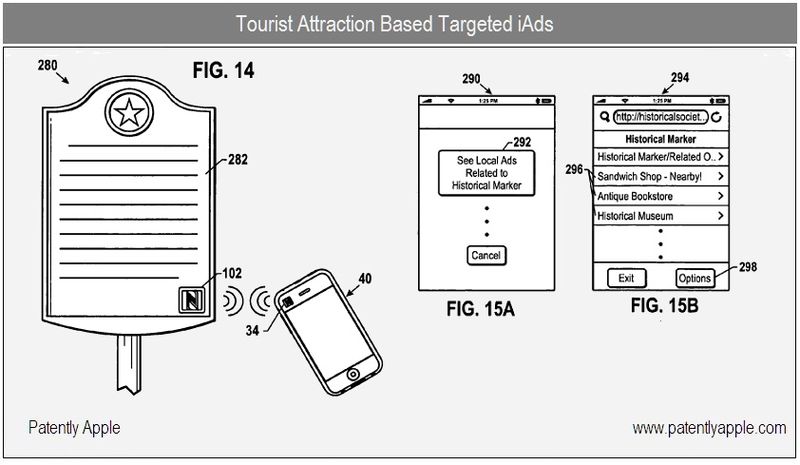 At that point, an iPhone screen 290 may include various prompts and other screens to follow to obtain the information as shown in FIGS. 15A and 15B. 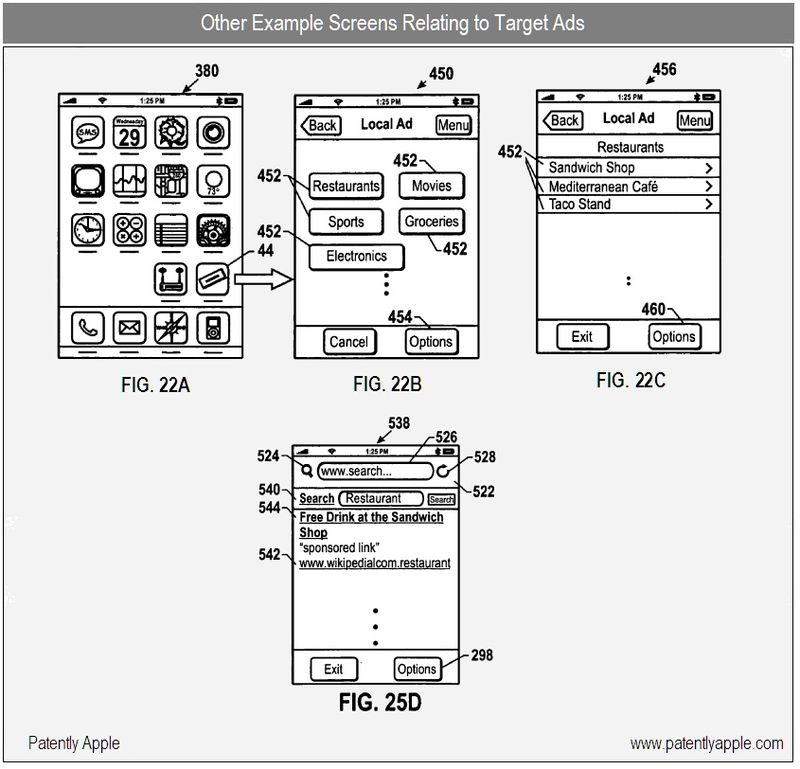