In the first two chapters of this series describing Apple's forthcoming e-wallet functionality, we covered such matters as Apple's iPhone transaction system, the overview of various transactions, the NFC-iPhone tap operation, credit cards, smart/debit cards, check handling and split-billing. In the third part of our series we present you with an overview of Apple's financial patent which focuses on a future iPhone interacting with Automatic Teller Machines or ATMs. Our report walks you through the basics of Apple's Transaction Application interface while exploring some of the more interesting security features it will be offering, such as advanced gestural and voice signature capabilities and a very unique ever-changing numeric pad interface for PINs. There's no doubt that the e-Wallet revolution is on the horizon and with every Apple patent that we are privileged to explore on this subject, we are actually peering through the peep hole of Apple's engineering lab and seeing but a glimpse of the grandeur of Apple's vision of the e-wallet of tomorrow.

The NFC Based iPhone for Purchases or ATM Transactions

Apple's patent begins with an overview of the iPhone and its built-in NFC (Near Field Communication) capabilities which were discussed in several earlier chapters. The focus of this report is about specific forms of transactions. We could clearly see the illustration of the iPhone below having a new transactions icon that displays a simple dollar symbol - noted as icon 32. When the Transactions icon is selected, the iPhone will open an application for conducting a financial transaction. The application may facilitate purchases or other financial transactions, such as those related to using an automatic teller machine (ATM). 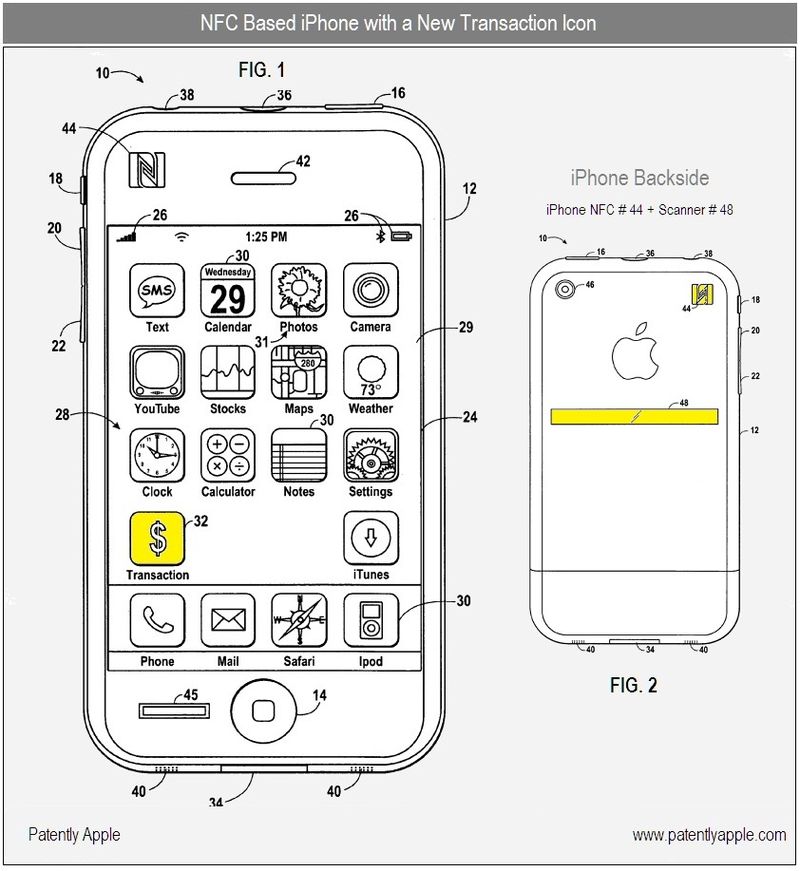 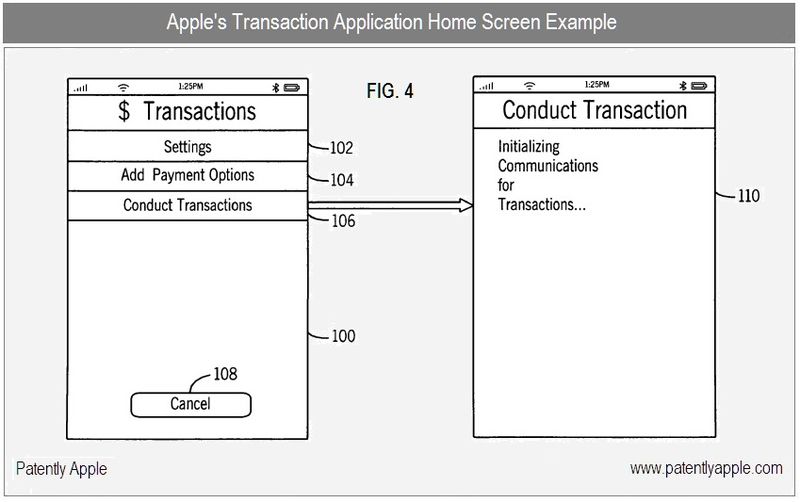 Apple's patent FIG. 5A illustrates a transaction terminal 120 that may include a screen 122 that may be configured to communicate information to a user via a GUI that contains text, images and icons. The transaction terminal may also include a box-like structure 124 over a portion of the screen. As shown in FIG. 5B, a user may position their iPhone over the box to obscure the portion of the screen 122 inside the box 124 which may provide additional security for transactions between the iPhone and the terminal. The visual between FIG. 5B and FIG. 6 is showing the iPhone beginning to cover screen 122 and then completing that action in FIG. 6 by completely covering the screen. 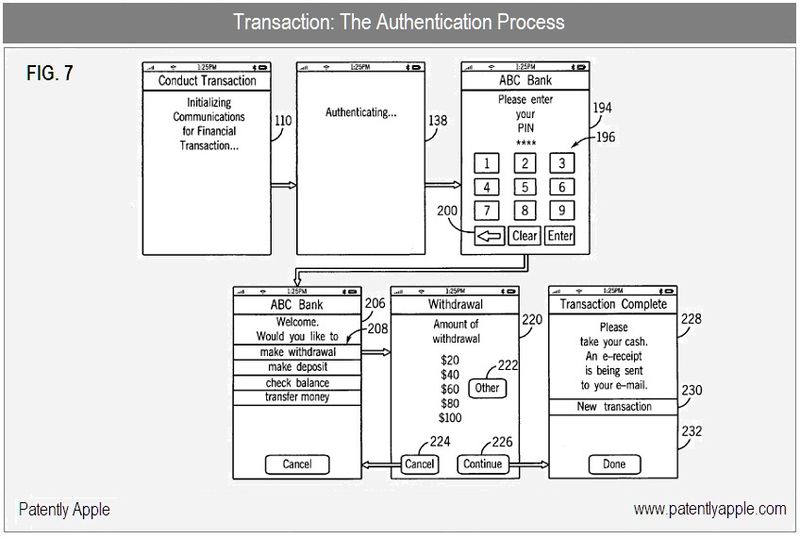 Specifically, the transaction terminal may be configured to display a code on the screen 134 within the box 132 as shown below in FIG. 8, such a QR code, a bar code, a micro QR code, etc. that could only be read and/or obtained by the iPhone. Specifically, the iPhone may be configured to read the code 150 by taking a picture of the code using the iPhone's backside camera or scanner as note in patent FIG. 2 above. The iPhone may then decode the information and provide the decoded information back to the terminal via the wireless communication device. If the iPhone provides the decoded information back to the terminal, the iPhone is authenticated.

Alternative authentication schemes may also be employed. Apple's patent FIG. 9A illustrated below presents a transaction terminal such as an automatic teller machine (ATM) 160 coupled to a server 162 to authenticate the iPhone for transactions. In FIG. 9B we see that the location of the iPhone is being determined based on information from the Positioning Device: A Positioning Device may utilize the global positioning system (GPS) implemented using satellite communications or a regional or site-wide positioning system that uses cell tower positioning technology or Wi-Fi technology, for example. In FIG. 9C, the iPhone is shown to be communicating via the cellular network 168. In FIG. 9D Apple discusses Bluetooth and Wi-Fi communication protocols. 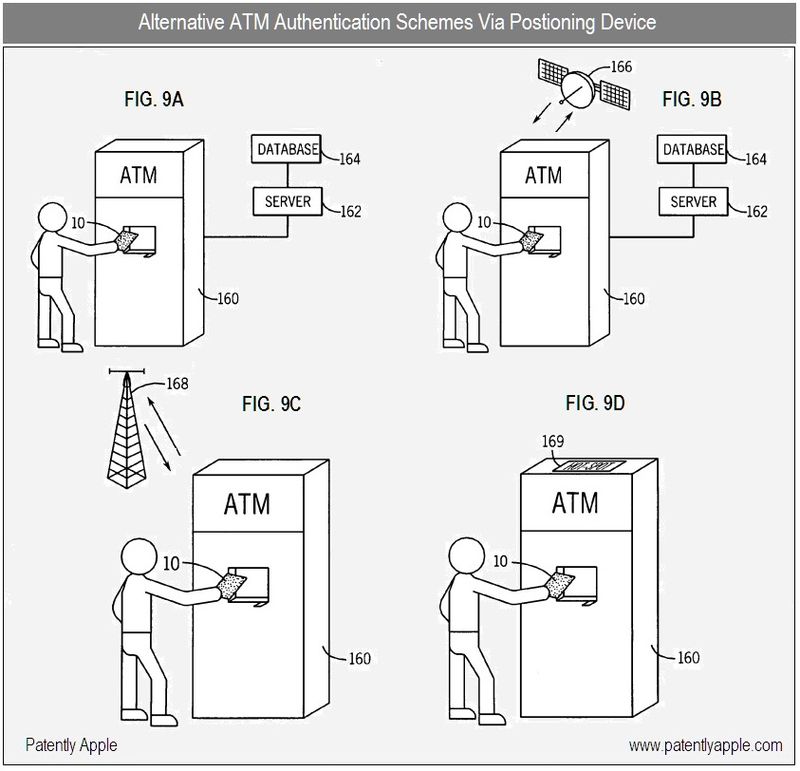 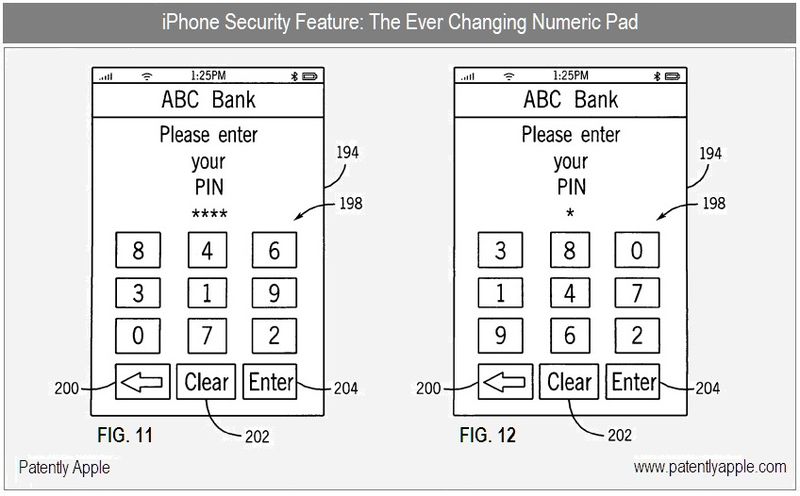 The number pad may also have a back space button 200, a clear button 202 and an enter button 204, each of which may be scrambled along with the numbers.

Security Feature: A Twist on Signatures

In respect to Apple's patent FIGS. 18A/B/C shown above, we see that various types of gestural signatures may be provided by the user. In Patent FIG. 18A the user is using a corner of their iPhone to write or provide a signature on a surface (326) of a transaction terminal 328. Alternatively in FIG. 18B, the user may simply sign their name in the air by moving the iPhone to spell it out. As illustrated in FIG. 18C a pattern may be provided by a user, for example, by moving the iPhone to the left, to the right, up, down, and with a twist. Therefore, the signature may simply be a pattern set by the user and recognized by the iPhone. Other alternatives may be available in the future. The "Set Gesture Signature" screen is seen below in FIG 19. 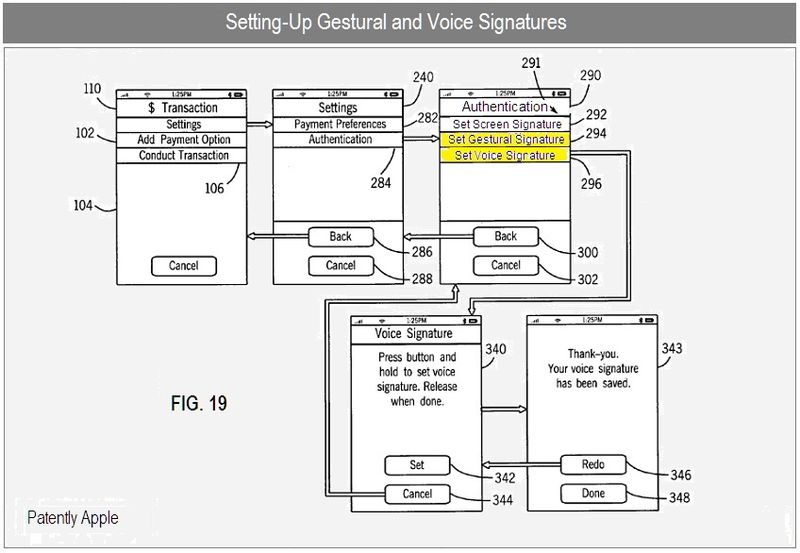 Other biometric signatures, such as fingerprints, retinal scans, etc., may be set in a similar manner except they may require that the iPhone include a device for detecting a finger print or a device for performing a retinal scan. Other advanced fraud detection features may be implemented by the banks on the server side of the equation.

NFC will be in all Nokia Smartphone in 2011

Just one idea as to where NFC could go:

I'd be interested to see how the ANT sensor support coming in a week or so - Coming a few days prior to WWDC potentially. Could Apple make a play into the sensor market?

I think Apple can crack the chicken egg problem. They simply produce >10 million chickens!
They add the feature to the phone. They tell the developers to go use it -it thus becomes a land grab - a gold rush - as it's a new market. Early adoption into NFC apps will land some serious money.
NFC brings other possibilities. And a bundle of 3rd party hardware/apps to boot. It makes its own economy.
matru - Apple's stated philosophy to be at the centre of your digital hub has been going for a while now.

important to know that these latest patents (this one included) will eventually let Apple play the privacy card, especially as other companies (ahem... Google) try to do the same.
I do believe Apple is preparing to fight GOOGLE the same way it fought IBM in the 80's by presenting it as an EVER_PRESENT entity that is always looking to centralize your life; which is exactly what they want to do!

@Kensai. Good Point. We could very well see Apple first ease this technology into other hardware. Yet, the iPhone and the iPod touch, to a lessor degree, is the key to making NFC make sense even on an iMac, MacBook or Apple TV. Time will tell.

Will we first see the iPhone sporting such connectivity or, for example, the new iMac this fall? Having some sort of limited exposure in fixed devices may be the best showcase for the next "gold rush" in development which will be based on the Internet of Things (sensors and the cloud).

@Tom. This is a definite trend Tom and without a doubt a feature of tomorrow. Apple could easily begin integrating this into the iPhone in the next 12-24 months. In 2006 the iPhone patents began to explode on the scene and in 2007 we had the iPhone. Of course, you couldn't tell that it was an iPhone in 2006, but the patents discussed a wireless tablet with telephonic capabilities. The point is that a surge in patent activity on this scale, on one focused topic, is almost a sure fire sign that Apple is seriously pushing this new capability. Tom, check out our NFC Section.

Each time I read an Apple Patent I get the impression that Apple have a deeper understanding of the smart phone market - especially, where it's heading - than Google does... time will tell!

What would a NFC chip look like - i'm wondering if they could have been identified/ruled out when looking at the iPhone 4G teardown that have occured, or whether this will be summer 2011 at the latest.

Is there a NFC trend coming from Apple - or are they just hedging their patent bets?