The US Patent and Trademark Office officially published a series of ten newly granted patents for Apple Inc. today. The notables within this group includes one that relates to present and future iPad docking stations, another covering the iPhone's Multi-Touch and sensor technology and finally an interesting one that relates to automating call forwarding between a land line phone and an iPhone. It should also be noted that Apple has won two iPod related design patents.

Technically, today's granted patent could relate to Apple's the new iPad Dock. Apple states that "you get easy access to a dock connector port for syncing or charging, and an audio line out port for connecting to powered speakers via an optional audio cable." These simple attributes are covered in today's patent.

Another similar patent point regarding the iPad is that "the portable electronic device may correspond to a tablet, and the base may serve as a location for accessing the internet or connecting to peripheral devices," like speakers or perhaps Apple's wireless keyboard.

What could be next for the iPad Dock? Well, according to Apple's patent "Non-contact based platforms may include inductive devices, optical devices, or wireless devices that are capable of transferring data and/or power without mating contact." 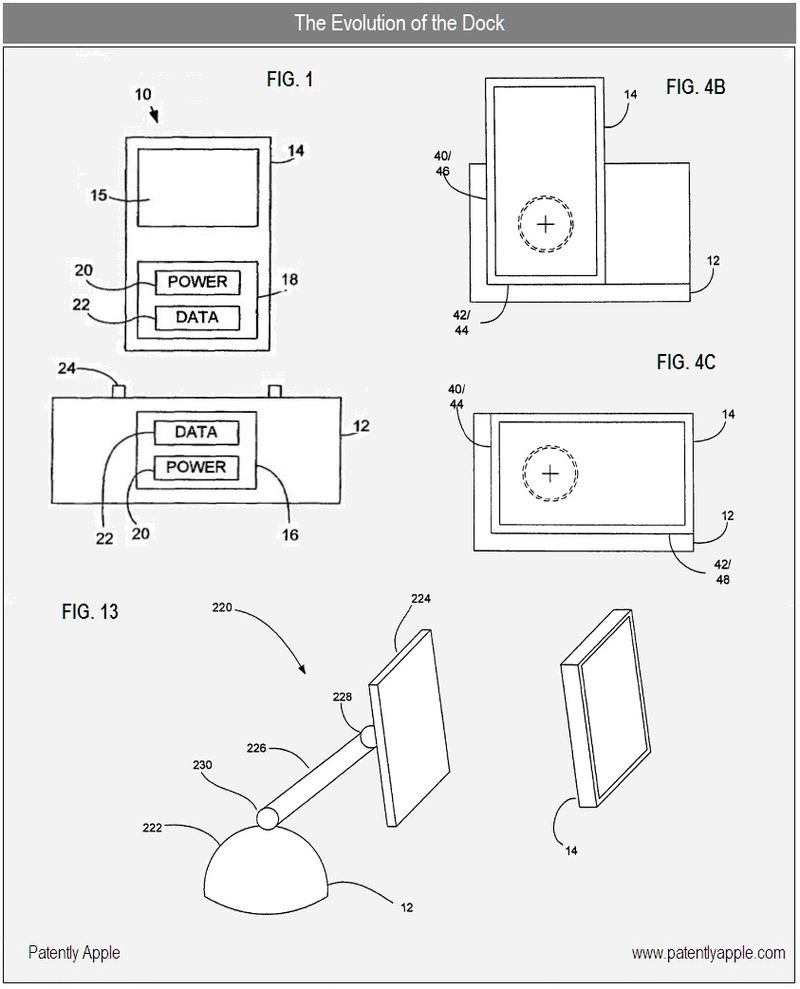 Apple's engineers further elaborate on this point: "With regards to non-contact platforms, inductive coils could be placed in each device to transfer both power and data. The inductive coils are typically hidden from view behind the housings of each device and therefore they are more aesthetically pleasing than electrical contacts, which need to be exposed in order to operate effectively. Furthermore, inductively based systems are more robust than electrical contacts. For example, there are no contacts to wear out and/or oxidize."

In the collage of patent figures noted above, we could see the possible evolutionary phases that the iPad dock could take in the future. Today we simply get a somewhat standard dock for the iPad that could later evolve so as to allow the iPad to dock in landscape mode – a feature that would be very appealing to many users. Secondly, we could eventually see a shift to inductive non-contact technology. Yet the most interesting possibility of all, perhaps, is the fact that the iPad could eventually evolve into a form of desktop, very much reminiscent of the iMac G4 as shown in the video below. The iPad would simply dock to a moveable arm and plate as illustrated in patent figure 13 above.

Apple credits Steve Hotelling and Gus Pabon as the inventors of Granted Patent 7,715,187, originally filed in Q1 2008. Technically, the docking station described in this patent could very well mark another patent fulfilled with the iPad Dock.

With Apple battling Nokia, HTC and others over iPhone and touch related patents, every newly granted patent for Apple is ammunition they could use in court.

Todays granted patent covers the iPhone and iPod touch in respect to multi-point touch, apparatuses and methods for sense proximity and light detection. 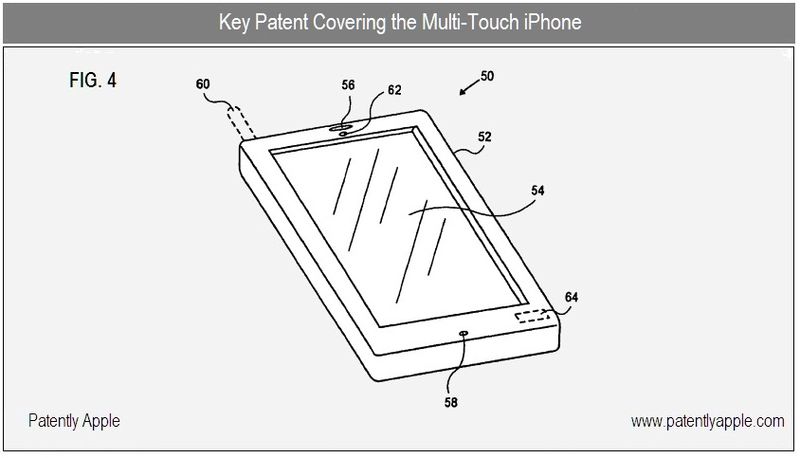 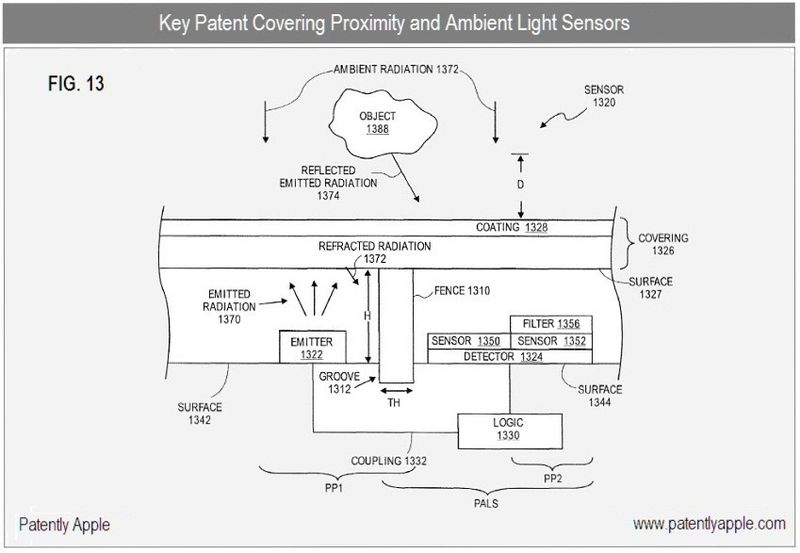 In Apple's patent figure 4, the display/input device 54 may include a multi-point touch input screen in addition to being a display, such as an LCD. In one embodiment, the multi-point touch screen is a capacitive sensing medium configured to detect multiple touches (e.g., blobs on the display from a user's face or multiple fingers concurrently touching or nearly touching the display) or near touches (e.g., blobs on the display) that occur at the same time and at distinct locations in the plane of the touch panel and to produce distinct signals representative of the location of the touches on the plane of the touch panel for each of the multiple touches. Additional information about multi-point input touch screens can be found in co-pending U.S. patent application Ser. No. 10/840,862, filed May 6, 2004 (see published U.S. patent application 20060097991), which is incorporated herein by reference in its entirety. A multi-point input touch screen may also be referred to as a multi-touch input panel.

Apple's patent FIG. 13 is a schematic side view of a combined proximity sensor and ambient light sensor.

Apple credits Anthony Fadell and Achim Pantfoerder as the inventors of Granted Patent 7,714,265. Although the patent is noted as being filed in Q1 2007 just prior to the debut of the iPhone, the fact is that components of this patent date back to 2004-2005.

Apple has been granted a patent that generally relates to configurable devices and systems, such as telephone systems, data processing systems, and others. One unique aspect to this patent is automating call forwarding between an iPhone (cell phone) and a landline. 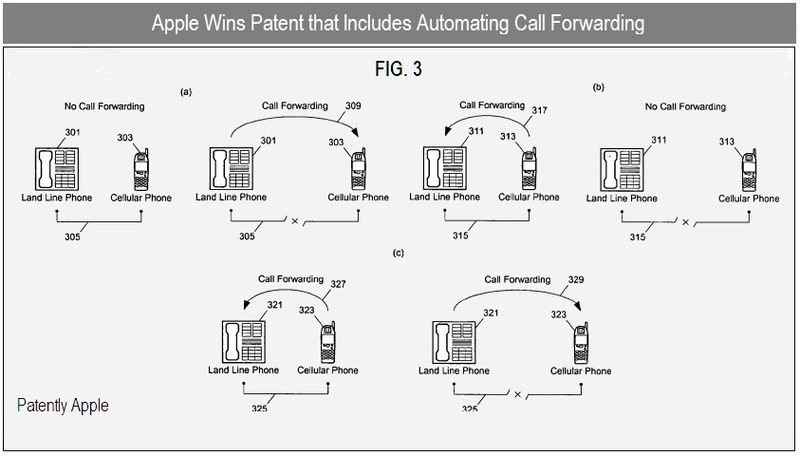 Apple credits Peter Kennedy as the sole inventor of Granted Patent 7,715,790, originally filed in Q1 2004. Peter Kennedy is also credited with a patent related to the iMac being able to simulate an iPhone for developers.

Another Patent Fulfilled: In a recent review of patent categories for our site, we discovered that Apple's mighty mouse had in fact fulfilled patent 20080150898 which described removing the traditional scroll wheel in favor of some kind of mini touch pad for a future mouse.

I'd really love to see the iPad docking station concept in action.

If Apple lets you turn your iPad into a desktop, why not make the Operating System switch to a desktop Mac OS when docked and back to iPad OS when on the move.