Let's be honest here. Finding a sales person in a department store these days is getting harder and harder to find, let alone finding one that's well informed or product savvy. So what's the next best thing? Well, according to a new Apple patent, the answer will likely come in the form of a new e-Wallet companion application that will act as your very own private shopping guide. Apple's future e-wallet companion application is simply identified as "Shopping" for now. The app is designed to read RFID tag on products and then on-demand - send you to the manufacturer's web site to get a fuller explanation of what product xyz is all about. It could come in the form of a brochure, presentation or video. Apple introduces us to the concept of creating active shopping lists and will eventually offer us the ability to get in-store maps which is a great idea when you're shopping at mega stores such as IKEA. Yet, it must be said that this application could be mildly controversial in that it taps into the whole privacy debate that is front and center in technology news cycles these days. Although Apple is only one of a few companies that I still trust in the marketplace today, there's still cause to be a little cautious.

Before covering Apple's patent, I think that the matter of privacy has to be raised, if only for a moment. Any time that I read in a patent that our habits are being tracked, I wince. It begins with Apple declaring that they'll be charging retailers a fee to be in the iPhone's Shopping database followed by them declaring that our shopping habits will be tracked and concluding with target advertising playing a major role in "Shopping." Hmm, it's starting to sound like the privacy issue storm clouds could be gathering here. Admittedly this is only a patent pending, so perhaps if we bang the drum a little loudly now we'll get Apple to address this potential conflict before it could ever gain any strength in the marketplace.

Am I overly concerned? Not really. Yet you can't hide your head in the sand or blindly be an Apple fanboy on an issue like this. Forbes just reported that "Facebook and MySpace sent advertisers code that identified which specific users were clicking on ads." While this problem has supposedly been cleared up since then, the fact remains that the damage still lingers: I mean, who really trusts Facebook anymore? It's not that Mark Zuckerberg is alone in his thinking about privacy issues, because it was Scott McNealy, CEO of Sun who stated back in 1999 that "You have zero privacy anyway…Get over it."

But say what you will, for most responsible adults, privacy most certainly matters and hearing tech company CEOs publically and nauseously downplay our concerns is a concern in and of itself.

The whole wonderment of gaining an e-wallet could go up in smoke in the blink of an eye if Apple ever pulled off a Facebook. Apple has to give consumers the ability to opt in or out of shopping features very much in the same way that they'll be handling location based services in iPhone OS 4. If they hope to make consumers feel comfortable with their new Shopping App, then Apple will have to find a way to ensure us that we, the consumer, absolutely rule when it comes to what information is being divvied out to third parties and so forth.

On the other hand, it's understandable that if we want to partake in the shopping conveniences of tomorrow on our iPhones that we'll have to give up a little privacy in order to accomplish basic tasks. Yet the emphasis here is definitely on "a little." With that said, let's look at some of the finer points of the iPhone's e-wallet companion called "Shopping."

Apple's patent generally relates to techniques for executing various shopping related transactions on an iPhone or comparable device. Some iPhone embodiments may be used to identify a product and obtain pricing information relevant to retailers of the product within a specified geographical location. In another embodiment, an iPhone may be used to acquire pricing information for a shopping list of products.

Embodiments may also include a variety of features that make the shopping experience quick and efficient while allowing the consumer to hunt for a better bargain. Furthermore, several embodiments also allow the product manufacturers and/or retailers to distribute relevant product information to targeted consumers who are known to be, or who may be, interested in buying a particular product. The only things of interest to note in Apple's Patent FIGS. 1 and 2 is that a future iPhone will include a new Shopping Application, shown above as icon #34, and will sport NFC (Near Field Communication) in addition to a backside scanner that will accommodate various user interactivities associated with shopping.

In Apple's patent FIG. 4 below we're able to see an illustration of a data transfer system (76) which is providing an iPhone user with the ability to acquire shopping related information about a product (78), be it an iPad or bottle of perfume via NFC technology found in both the iPhone and on the product packaging itself in the form of an RFID tag. 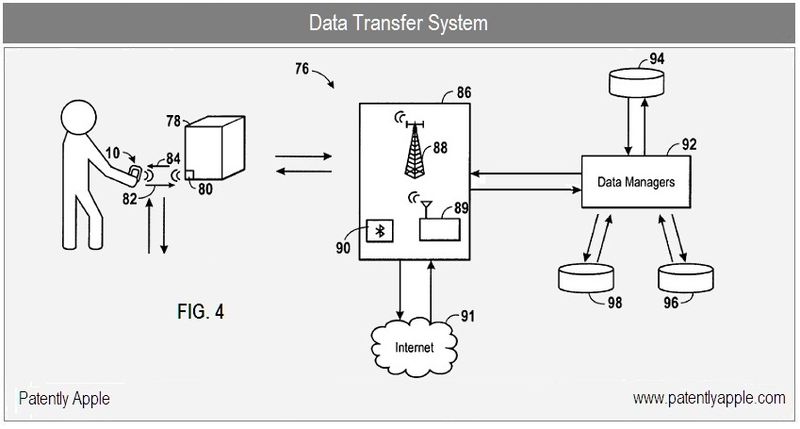 Following the illustration above, we see that after the iPhone connects to a product on a shelf via NFC, the return signal 84 carries the product identifier that could carry relevant information about the product. The iPhone user will then be presented with a brochure, a video or perhaps even a promotional coupon that they could present to the cashier.

In Apple's patent FIG. 22 we see a system for allowing a user to create a shopping list with their iPhone. To facilitate the addition of items to a shopping list, each product (#78 e.g. bunk bed) throughout a furniture store may be associated with an NFC RFID tag (# 80). The NFC tag may be found on a product or coupled to a product display or sign.

The shopping list is pretty simple to understand. It's about you setting up the Shopping app on your iPhone with the stores that you most frequent and prefer in several categories, be it electronics, groceries, furniture, clothing and so on. Most of us have a preferred list of stores and so that's the starting point. One of the reasons that you'll find this appealing is that once your lists are set up, the fun begins. Want to know if one or your listed electronics stores has the latest Sony Bravia XBR on sale today? Well with one click, the iPhone will check out the databases of the electronic stores that you have listed and returns with the information that you requested on price. 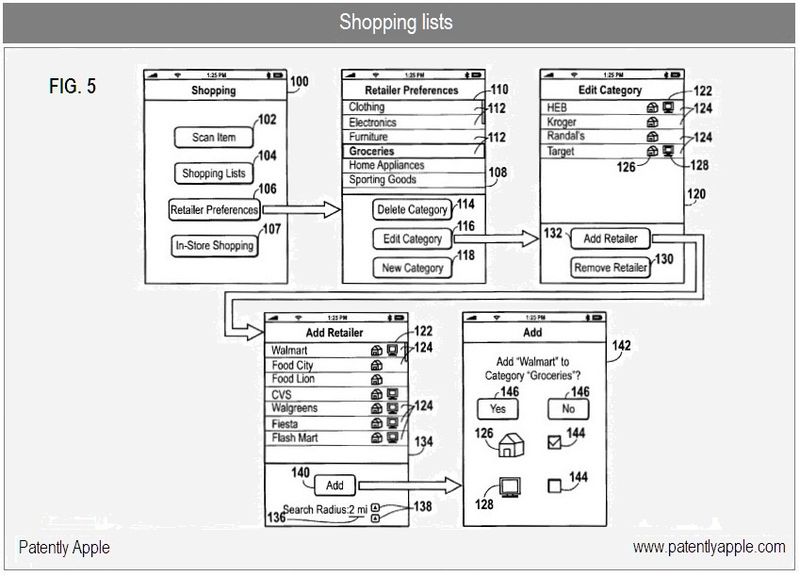 Another interesting facet of this application is that your lists could be stored on MobileMe so that "groups" could access the same lists. Think of a family with parents and two teenagers 18 and 19. If one of the shared lists happen to be groceries, then it's possible that anyone on the road coming back home could check the list of needed groceries, like bread and milk, and then pick it up and delete it off the group list so no one else could duplicate the purchase. These shared lists could also be created by other types of groups such as room-mates, classmates or co-workers, for example.

One of the more interesting little factoids of this patent is that a retailer may have to pay a fee to Apple so as to be included in the retailer database associated with the iPhone.

Identifying a Product with your iPhone

Shown below are Apple's patent FIGS. 6, 8, 9 and 10 which simply illustrate the various techniques you'll eventually use on your iPhone to identify a product. They include a touch scan, a camera scan and a manual entry system. You'll also be able to check out all of your "recent scans" with one click. To review every single function laid out in each of these four illustrations, check out Apple's patent points 0069 through to 0075 found in patent 20100082447. 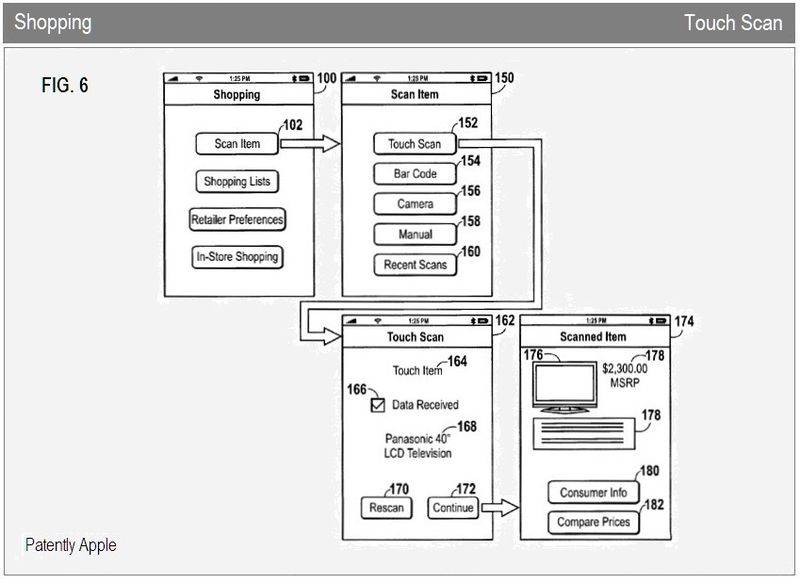 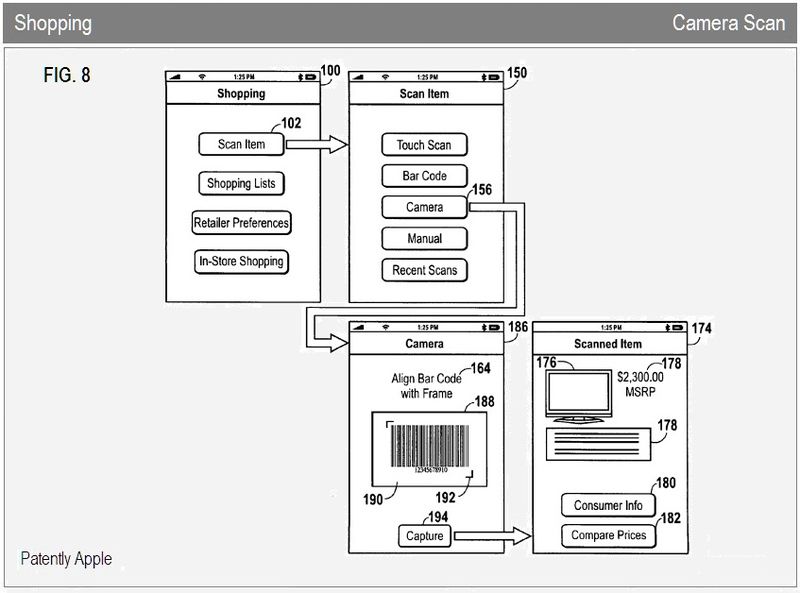 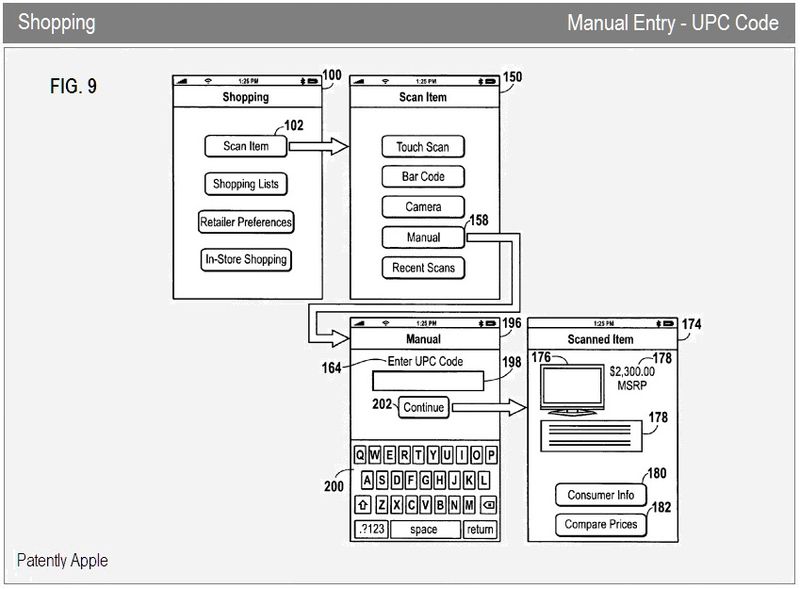 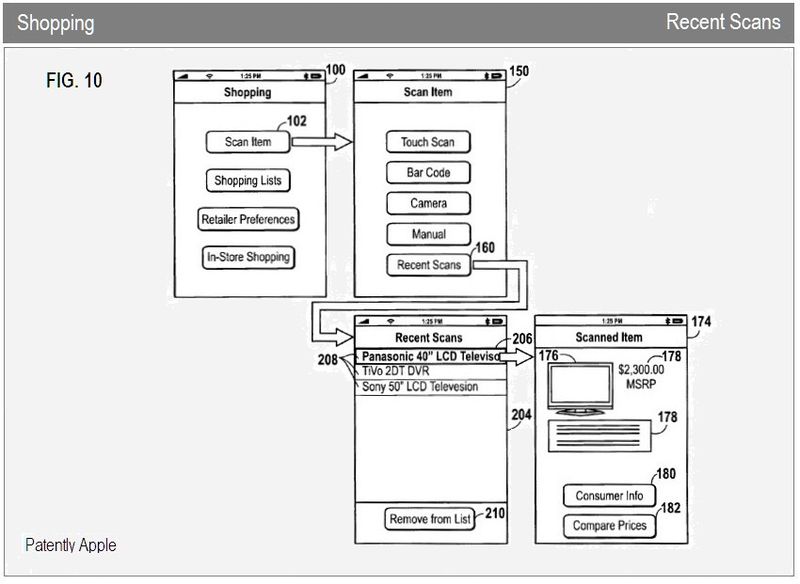 Apple's patent states that the shopping list screen may serve as a gateway to other shopping related features of the iPhone like a twist on Apple's Map + Compass feature. The "map" button 234 of Apple's shopping app as shown below in FIG 12, is tied into the location of each store that you've entered into one of your "lists" as noted earlier or used to find new retailers you've found on the web in your city. The map will be able to obtain turn-by-turn directions from his or her current location to the selected retailer.

In some embodiments, the map element 246 may also include a trace depicting a route between the user's current location and the selected retailer. Additional features of a mapping application may also be included, such as route guidance. 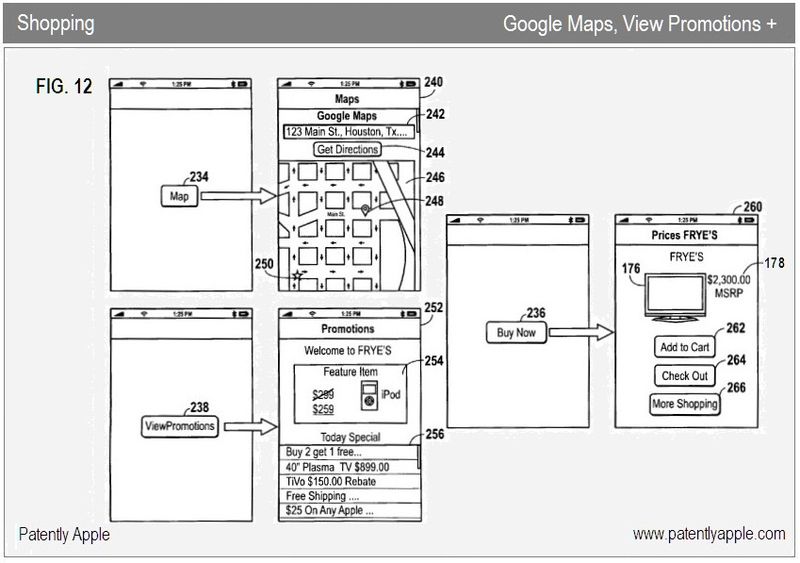 The promotions screen may also provide the option of retrieving an "electronic coupon" to be used at a particular retailer location or online. For example, the promotions list may include a listing for a coupon, which the user may select to download the coupon to their iPhone. Upon purchasing the featured item, the user may upload the coupon from their iPhone to the retailer to realize the savings advertised. If the user uses the coupon in the store, the retailer may have a corresponding electronic device at the cash register for communicating with the iPhone NFC communications so that the coupon may be transferred from the iPhone to the retailer. 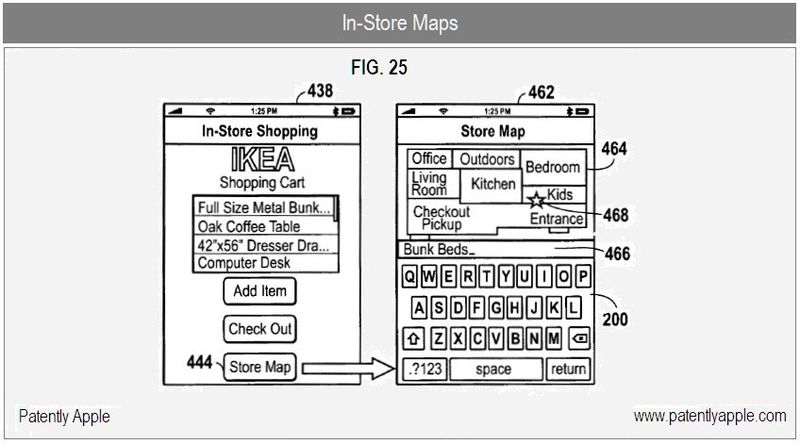 The Shopping app's twist to Maps + Compass comes in the form of an "In-Store" map. This could be a fantastic little value-feature if the retailer ensures that their in-store mapping is up to date with the iPhone. Apple uses the example of IKEA which is a rather good one being that IKEA's stores are absolutely massive. Trying to find that one item you're interested in getting on sale at IKEA using an in-store map could save you time and a headache. I'd like to use it at our food market. If you've ever had to find a jar of mustard or pickles in a store with 80 isles – forget about it. You could be half an hour trying to find it if there isn't a store clerk around to assist you. So by simply typing the word "mustard" into the iPhone's Shopping App, you'll find an in-store map pop-up and show you exactly where that mustard is.

Michael Rosenblatt, Gloria Lin and Andrew Hodge was published in that same time frame. Also read about Apple's e-Wallet patents and more on this subject in our Tech: NFC section.

Update May 27, 2010 4:15 PM Mountain Time: Earlier today, Mark Zuckerberg, CEO of Facebook made an about face in his position on privacy by stating the following: Privacy is so important to people, it is one the biggest (issues) on the internet. As market leader, we should be held to a higher standard." Others in the media think that it's only a good first step. As we stated earlier this morning, privacy is a burning issue and it's one of those classic "Us versus Them" issues of our time.

NFC will be in all Nokia Smartphones in 2011